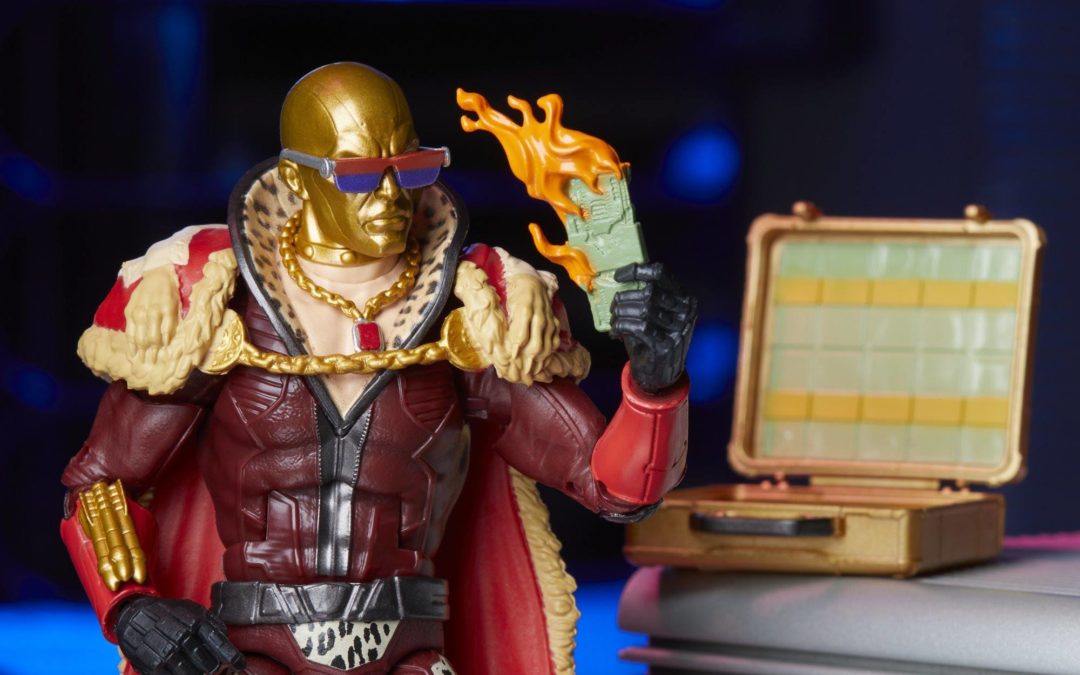 Well, today was the day! At 12:30pm Eastern Lenny and Roni from Hasbro hosted the first ever “Fan First Friday” event on Hasbro Pulse for the G.I. Joe brand!

I was fortunate enough to piggy back on The Full Force as we watched it all unfold, then posted a great Facebook Live video directly afterwards, running through the good, the bad and the ugly (spoilers — not much ugly, even with Destro’s leopard print cape.

Head on over to The Full Force Facebook Page for all the skinny.

Meanwhile, Hasbro representatives broke it down with a ton of details and images for Wave 2 of the G.I. Joe Classified line as well as the special collector exclusive “Regal” COBRA Commander (in light blue and gold), the exclusive Profit Director Destro, and the Amazon exclusive Arctic Storm Shadow (with a nice Ninja Force homage!)

Check out the full details and the images below!

During ComicCon over the weekend, 1000 Toys not only launched the pre-order for their upcoming 12″ Snake Eyes, but also debuted a first look at Storm Shadow as well!

And holy crap.  I LOVE that Storm Shadow.  It’s a completely unique take on the COBRA Ninja, with a fantastic looking robotic head sculpt and some insane looking articulation, yet still manages to have the look and feel of the classic character.

The more I look at these two figures, the more I feel like I need them in my Detolf display case, and the more I wonder how the heck I would possibly afford it.  Check out the images below and big thanks to Chris from The Full Force for the heads up!

It seems like Funko POP are all the rage right now, and G.I. Joe is being taken along for the ride.  Entertainment Earth has posted pre-orders for the first series of G.I. Joe themed Funko POP figures and they look pretty fun.

Check out the product links below.

The 50th Anniversary reviews continue! Ever since the early days of Sunbow, Spirit and Storm Shadow have gone head-to-head, and this year’s 50th Anniversary line celebrates that with their “Classic Clash” two-pack.

Featuring a cool new look at Spirit and an updated Storm Shadow in his classic ’88 battle togs this is one of the most looked forward to packs of this year’s release.

Check out my 50th Anniversary Review page for the latest, or click the links below.

I have a very mixed feeling when it comes to the 1988 version of Storm Shadow.  My first reaction is resistance, because I’ve always loved Storm Shadow as a foil for Snake Eyes, and it was disappointing to me when he shifted over to the G.I. Joe side.  Between him, Zartan, and Destro, it feels like COBRA gets skinnier and skinnier with their credible threats to the Joe team.

That being said, I also have fond memories of this figure.  Back in ‘88 I lived in (very) small town Vermont and rarely had the opportunity to buy new G.I. Joe figures.  I was making my routine run down to the local General Store, just to get candy or something, and happened to take a perusal through the toy section.  Much to my shock and surprise, there were new G.I. Joe figures that I had never even heard of before sitting on a peg there.  Right out in front was the 1988 Storm Shadow!

Well, because this was a general store in small town Vermont, each figure was like eight dollars, a great deal more than the four bucks or so I was used to paying at the (semi local) department store.  My eyes grew wide, and I immediately dropped the figure and RAN all the way home, desperately digging through every corner of the house for spare change.  Half an hour later, I’d manage to cobble together the required money and travel back to the local store and was practically skipping home with the new Storm Shadow figure tucked under my arm.  It was a good day.

Fast forward too many years and we saw a terrific looking update to this figure at the Concept Case display at JoeCon in 2013 (no he wasn’t in the first concept case, but he was in the second).  With some key new tooling and lots of existing parts it was a pretty nice looking update to the ‘88 classic…actually forget “pretty nice” it looked damned perfect.  But as we know, sometimes figures that look perfect in concept don’t always execute to that same perfection, and the retail release of Storm Shadow does have a few shortcomings.

The base figure uses most of the G.I. Joe: Renegades/30th Anniversary version of the character, and it’s pretty tough to go wrong there.  As one of the best figures in G.I. Joe’s right history of great figures, that Storm Shadow stands on the mountain top as a shining example of what can be done in the 1:18th scale.  Using the same upper arms, torso, and upper legs as that Storm Shadow, it was tough for this figure to go wrong, and thankfully the lower arms, lower legs, and new head only add to the awesomeness.  I believe these parts were all sculpted and tooled for a retail release of this figure, but I may be wrong on that.  Regardless, the new parts compliment the existing parts perfectly, and it ends up taking a fantastic base figure and making it fantastic-er.  The separated fingers, a remarkable achievement the first time around, continue to be exceedingly useful here, allowing this updated Storm Shadow to really notch an arrow for his bow.

For the most part.  The only issue I have is that for whatever reason the new head doesn’t sit real well on the existing torso neck peg.  It gives the figure an unusually long neck, but honestly, that’s a pretty quick fix if you’re so inclined.

The other disappointment to me is that while the concept case Storm Shadow had his trademark belt of pouches, this version does not.  I can only imagine they were costed out somehow, but that’s quite unfortunate because they are one of the defining traits of the figure.  He looked pretty terrific with those pouches, and it’s a pretty glaring omission to look at the final figure and not see them.  Hard decisions must often be made during the production process, I just wish perhaps they had found a way to cut somewhere else so the pouches could have been maintained.

Beyond those two disappointments, the figure is pretty stellar.  Articulation is fantastic, he maintains the great separated finger hands of the original, and the ‘88 homage paint scheme is crisp, accurate, and aesthetically pleasing.  From a plastic quality perspective, I feel like the figure is a shade or two below some previous years, but doesn’t feel quite as thin and cheap as last year’s 50th Anniversary run.

Like Spirit Iron-Knife, Storm Shadow comes with a number of great accessories.  Ironically, he comes with the compound bow and arrow quiver that the Pursuit of Cobra Spirit Iron-Knife came with a few years back.  He’s got a re-release of a great backpack that came with a Comic Pack version of the character several years ago, and like Spirit, showcases how great some of those past accessories were, even if the figures themselves could have used some improvement.  The backpack was so great, I completely forgot it was originally released a number of years ago!

He has two swords with red handles and a climbing claw, all of which are very nice call backs to the figure we received in 1988.  Lastly, he has a removable rope harness to replicate the look of that figure, too, though it’s pretty big and doesn’t fit the torso especially well.

This figure is honestly pretty great.  It has some unfortunate drawbacks compared to the Concept Case version, but as I said, I think we all know that things sometimes get cut in the production process.  I feel pretty strongly that they should have tried to find a way to keep the pouches, and I wish the head sat a bit lower on the neck, but besides those minor complaints, this is one heck of a great looking update to the classic ninja character.

Classic character in his classic 1988 G.I. Joe themed battle togs, this revamped modern rendition of Storm Shadow is excellent in many ways. It drifts just short of perfection with some cost cutting decisions, and part fit issues, resulting in an elongated neck.

1 – Base figure (30th Anniversary/Renegades Storm Shadow) is fantastic
2 – Nice selection of newly tooled parts which look great.
3 – Great backpack, which really opens and contains nicely detailed gear
4 – As with most of these ninja figures, articulation and figure balance are both stellar