There hasn’t been much in the way of G.I. Joe news this weekend at Toy Fair, but statue company Prime 1 has stepped up to the plate in a HUGE way over at the Tokyo Winter Wonder Festival previewing some fantastic looking G.I. Joe statues including Serpentor and Destro!

These are not inexpensive endeavors, but they look spectacular.  Big thanks to Skinny on Twitter for the heads up, and Statue Review on Instagram for some of these images.

They’ve previous revealed both a Snake Eyes and a Storm Shadow statue, so things are looking pretty great for G.I. Joe statuary fans and collectors!

While most (if not all) of us saw the Serpent O.R. reveal from Botcon a few months ago, yesterday, the TFCC made it even more official and released the images of their upcoming FSS 3.0 entry for Serpent O.R. Based on the character from the Devils Due G.I. Joe vs. Transformers: The Art of War limited series, this figure looks pretty nice! It will be very interesting to see how his story intertwines with Marissa Fairborne. IDW writer Jim Sorenson recently revealed on Facebook that he was writing the bio’s for each figure, so there is certain to be some interesting back story here.

Check out the figure below, and make sure to check out TransformersClub.com to join FSS 3.0, time is running out!

If there are any G.I. Joe fans following Botcon, you no doubt caught the news of the Transformers Collectors Club revealed their line up for their third Transformers Figure Subscription Service.

Nestled within some other familiar characters was none other than Serpent O.R., a character pulled from the Devis’ Due G.I. Joe Vs. Transformers “The Art of War” series! The Serpent O.rganic R.obot is obviously an homage to the classic Serpentor character from the G.I. Joe mythos.

Images from the slideshow have been posted on TFW2005.com and the resemblance to everyone’s favorite Cobra Emperor is immediately evident in the color scheme. Check out the mirrored image below. Pretty cool homage, I have to say!

Make sure you keep your eyes on the exciting Shout! Factory Streaming Event live from Botcon, and all of the Botcon coverage from Figures.com!

Another late Friday night…but hey, I’m married with a couple of kids and I’m a toy nerd, it’s not like I’ve got a hot date or anything.
G.I. Joe: Renegades picks up steam once again tonight, thrusting us right back into the thick of the Joe and Cobra conflict!  And we also just might get a glimpse of an important player on the Cobra side… or two.
Check out the Episode Guide, or hit up the Episode 11 entry itself right here. 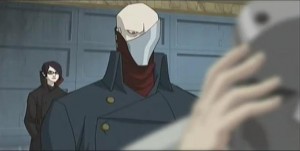 Exclusive Interview with the writing team of G.I. Joe: Renegades

Last year (it seems so long ago) a member of The Terror Dromes editorial staff got a chance to catch up with Henry Gilroy at the San Diego ComicCon.  Well, it just turns out that Mr. Gilroy is one of the lead writers of G.I. Joe: Renegades, and he was kind enough to offer himself up to answer questions.
The Terror Drome was equally kind and gave me a chance to put my own .02 in, and below is the outcome of this interview.  You will see questions that were posed by members of the Terror Drome forums as well as my own questions near the end of the interview.
It’s a pretty long, detailed, and wide-ranging conversation about G.I. Joe: Renegades!  Check it out after the jump, and a humongous thanks to the great guys at The Terror Drome for letting me be included in this great opportunity.
END_OF_DOCUMENT_TOKEN_TO_BE_REPLACED