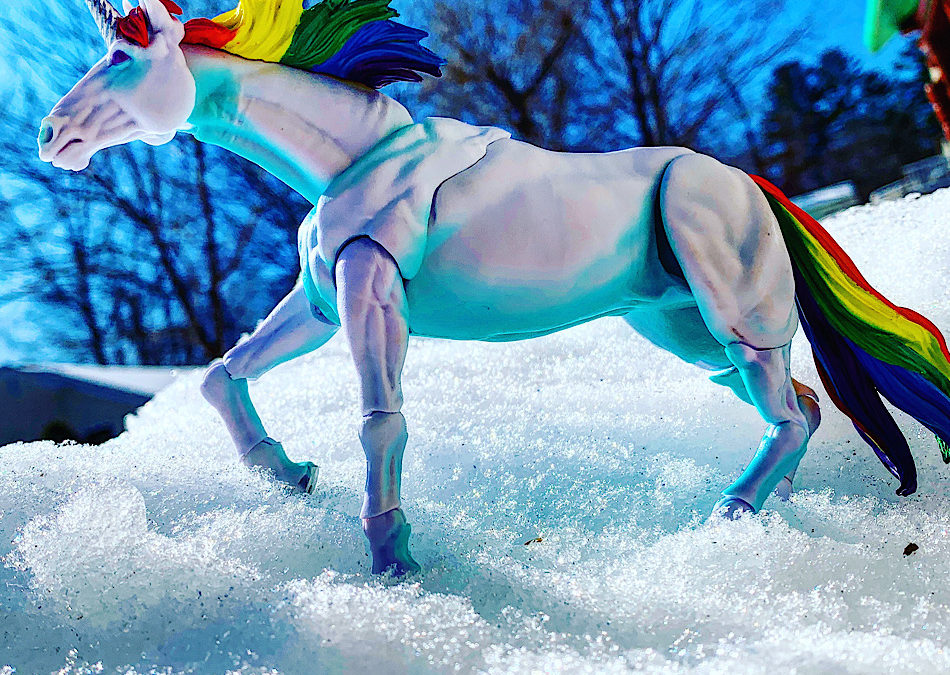 How’s that for a mouthful!

After a somewhat long hiatus from the review game, I’m more than happy to jump back into things with a review for Frankie The Unicorn, the first Mighty Steeds offering from Boss Fight Studio that I’ve gotten my grubby hands on.

As one might expect from the toy wizards at Boss Fight, it’s pretty amazing.

Check out the review here, and you can find it on BossFightShop.com right now!

I’m not sure who was looking forward to these more– me or my ten year old daughter.

Thankfully I convinced her to let me play— err… review this one even though it’s been mostly living in her bedroom.

Along with their shipment of the Mighty Steeds Kickstarter figures, Boss Fight Studio also unveiled a surprise Steed – Frankie the Unicorn! I was thrilled to see this, because I realize the Boss Fight crew has several thousand items to gather together and ship from the Kickstarter and any opportunity to get my greedy hands on one of these Mighty Steeds is a good one in my book!

Many folks have been asking about Frankie and how he differs from Sara Francis, which was a Kickstarter exclusive.

But forget all that — how is this Mighty Steed?

Pretty fun, all things considered. Granted I don’t have any tack or any creature kits yet so I can’t speak to some of the cool stuff I’ve been looking forward to like wings, armor, and saddles, and just focus mainly on the base horse itself. To put it simply, this thing is a marvel of engineering.

The sculpting of the horse is simply magnificant with the intricate muscles, veins and even visible underlying skeleture throughout the magestic looking creature. The articulation is subtle, yet exceptionally functional, providing a wealth of posing options that look great standing still or in motion, without the visible joints totally disrupting the flow of the horse’s sculpt.

Even the spot where the lower torso connects to the neck (which is removable so the piece can be added to provide recepticles for wings, etc…) is sculpted almost flush to the rest of the body, providing very little disruption in the look or feel of the creature.

The mane and head all work really well, too, and in the unicorn’s case, the layered horn looks really awesome in either gold or silver.

In Frankie’s case, the paint work is truly exceptional. There’s the immediately evident stuff like the vibrant rainbow mane and tail and more understated silver hooves and horn. But where this creature really shines is the subtle teal overspray which adds some excellent color to an otherwise plain white horse that truly gives the unicorn a more magical look and feel.

Frankie the Unicorn is a spectacular introduction to the Mighty Steeds line from Boss Fight Studio. I find myself even more excited and eager to get my hands on the rest, and I think once I get the tack and creature kits, my love for this new segment will only increase.

Frankie the Unicorn is now on sale on BossFightShop.com and the rest of the Mighty Steeds should be coming along soon. As usual Boss Fight has absolutely knocked this out of the park and I can’t wait to get my hands on more.

All right, folks, it’s time.  We’re getting down to the wire – only eight days left to fund some stretch goals for the exceptional Vitruvian HACKS Mighty Steeds Kickstarter!

Yes, the good news is this bad boy is FUNDED.

The bad news is I don’t have any centaurs yet!  Come on, everyone, let’s make one final eight day push and get some of these terrific stretch goals under our belts.  I needs me Kawiki the elk, I needs me some Knight tack, and some Knight of Asperity tack and I NEEDS ME SOME CENTAURS.

Who doesn’t need their own Rainbow Unicorn?

Seriously, between me and my eight year old, we are fired up about this Kickstarter, and I’m hoping everyone else is getting that way, too.  So much cool potential not just now but in the future for more creature sets if the interest is there for this one.

Please hit up the Kickstarter and throw some support its way there’s a ton of awesome stuff still to be unlocked.