I couldn’t love the looks of this any more if I tried.  Over on the Marauder Facebook Page (as well as via an update to his Kickstarter Page), Marauder has revealed a 3D image of the upcoming Marauder Task Force Exo-Suit.

And yes, it looks amazing.

Big, bulky, yet promising some impressive articulation, this fantastic looking mechanized Exo-Suit has been designed by the action figure wizards of Boss Fight Studio, which alone convinces me that it’s going to rock.  Check out the 3D image below, and if you haven’t kicked in some cash for the latest Marauder Kickstarter yet, what are you waiting for?  We all need this exo-suit in our lives.

I’m unreasonably excited about this, mostly due to the bad ass design aesthetics of the Exo-Suit.

With the posters and concept art shown off at NJCC, MJ had said to expect the Kickstarter soon, and soon means NOW.  Featuring the introduction of the K-9, the Exo-Suit and the Contract Ops Marauder Task Force figure, this Kickstarter also introduces a ton of new, exciting colors to your existing Task Force and Valkyries squads.

Personally, I’m all about this Exo-Suit.  With a ton of customizable parts there looks to be an infinite number of combinations not just for suit pieces, but also for different elements of the suit to connect directly to the figures themselves.  Truly awesome looking stuff from Marauder and the design wizards at Boss Fight Studio.

As of this writing, the Kickstarter stands at $26,000 and I expect it to blast through funding quickly before moving on to some stretch goals, so let’s get this cranking!  Daddy needs a camouflage Exo-Suit!

The New Jersey Collectors Con celebrated their first two-day event this past weekend with a Boss Fight Launch Party, promoting the launch of their Series 2 Fantasy lines and they took this opportunity to bring in the wonderful folks from Marauder, Inc. including some show exclusive “Engineering Ops” Marauder Task Force figures and more information about a wealth of projects in the works for Marauder.

Some of those exciting announcements were that due for Kickstarter, potentially in the next 1 – 2 weeks, are their K-9, the Contract Ops Task Force figure, and their spectacular looking Exo-Suit.  Marauder had some detailed images of concept art for these items at their booth and it’s pretty awesome looking stuff.

Along with the upcoming Kickstarter, there are also plans for a brand new series of Marauder weapons and new 1:12 scale weapons as well for your favorite 6″ sized action figures!

Last, but definitely not least, I have some personal investment in this next bit of news… revealed on the Friday before NJCC is that there is an upcoming RPG slated to run using the Marauder Task Force figures as a backdrop!

I will be working on this project in a writing/development capacity, and I am so thrilled to be a part of this, and I’m extremely excited for everyone to join me on this ride towards a more immersive Marauder universe. This is going to be a blast!

I can’t thank the folks at Marauder enough. They were more than gracious, great to talk to, and their customer service was exceptional throughout the entire weekend. Such a pleasure to talk and work with them. Do yourselves a favor and, if you haven’t, hit up MarauderInc.com and check out their Task Force product. You will be real glad you did.

It’s taken me a long time, but I’ve finally gathered together my thoughts for the sixth series of Marauder “Gun Runners” fantastic weapons and accessories.  From standard assault rifles to a plethora of modular accessories, grips, and scopes, Series 6 of Marauder’s offerings is simply fantastic.

Check out the full review in my Marauder “Gun Runners” section, or at the direct link below. 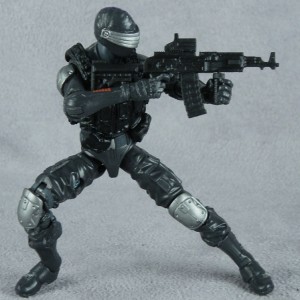 Displaying figures came to the forefront with the Anniversary line, as Hasbro started including display stands with every figure.  Yet, as with the vintage stands, they are static, rectangular, and just never seem to be the right size to fit every display.

Marauder to the rescue, as usual.  There was a special premier of these at JoeCon 2009 last weekend, and now they are up for sale at the site itself.  These awesome action figure stands feature a very unique interlocking design to basically build a platform of stands that is extremely versatile and infinitely useful.  Not only that, but each stand has a peg for the new Anniversary/Star Wars/Rise of COBRA peg holes, but also has a peg for the vintage style as well.  Great stuff.