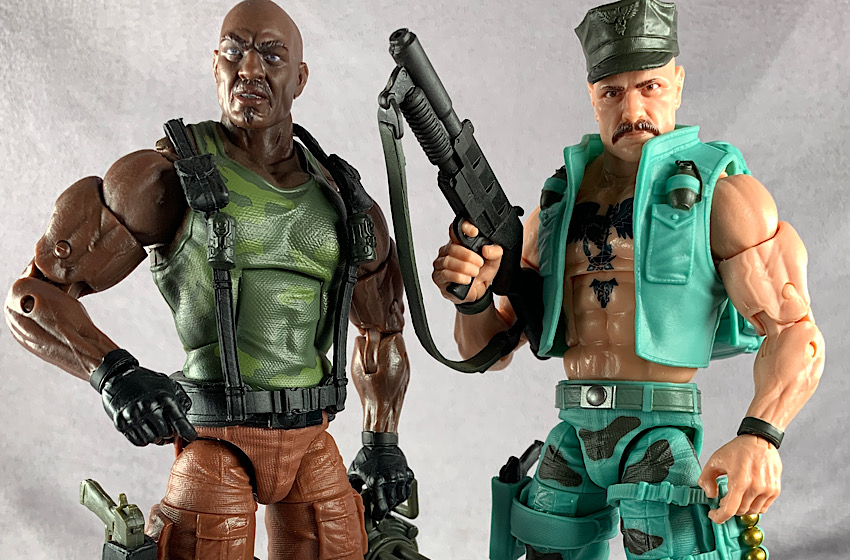 G.I. Joe: Classified Retro – Are they worth it?

So I hesitate to call this a review, even though it kinda/sorta is a review. Recently I got my hands on the first four G.I. Joe: Classified Retro figures released as Wal-Mart exclusives. Beyond the mangled card backs, the figures have their own pluses and minuses, some, obviously with more pluses than others.

So while I didn’t do a full-blown review breakdown of each figure, I did post a single look at the four different figures, outlining their good points and bad points with a ton of images.

Check out that post right here. It will also be mirrored on the G.I. Joe: Classified Review Page.

Let me get this right out of the way up front — when Hasbro first announced they were doing a Wal-Mart exclusive G.I. Joe: Classified “Retro” line, my first response was — why? I mean, after all, the standard releases had been trending very close to Retro already. What was the point?

When we saw the first figure — a carded Baroness, I doubled down on my reaction. While the oversized card was an interesting trinket, the placement of the bubble and the somewhat dull positioning of the figure (empty space and all) didn’t really make it at all appealing. Now, to be fair– the Baroness was a sensible choice, after all, she’d only been available in an expensive Target exclusive pack alongside the COBRA Coil motorcycle, so at least at Wal-Mart someone could drop $20 for just the figure.

In my mind, the extra items in the Target version made it worthwhile, but– I digress.

So, I guess the real question is– if I was so lukewarm on this idea, how the hell did I end up with all four figures?

Because Hasbro managed to weave some interesting design elements into them that made them worth my money? Yes.

Because I’m a G.I. Joe sheep who just might very well buy almost any action figure with the G.I. Joe logo on it? Also yes.

To be fair, Hasbro did manage to do some interesting things, especially with Lady Jaye and Gung Ho, so I bought those two readily and eagerly. Then I received a free Baroness inside a Hasbro Fan Box — and my obsessive nature compelled me to at least purchase that final figure I was missing. Thus, I ended up with the whole damn set.

I suppose the answer is– do I regret my choice? Hmmmm… yes and no.

From my perspective, both Destro and The Baroness are objectively worse than their standard retail versions, so in those cases, yes I have some buyer’s remorse (though really only for Destro, since I got Baroness for free). The removal of some of the gray trim from the Baroness, the lackluster weapons and the removal of her knife sheath are all big points against the Retro version of COBRA’s female intelligence operative. I do like the stand she comes with, but that’s about the only improvement.

Destro is a little bit better with the black, animation specific eyebrows over his eyes and a somewhat eye-catching silver on his gloves, but by and large, I much prefer the color breaks of the retail version of this figure as well. I think “regret” or “remorse” might be a strong word, but suffice it to say, the Retro Baroness and Destro will not be the ones that I stand up in my display.

Animation accurate or not– new stands or not– I just prefer the way the original releases look and will be sticking with those. I can kinda understand why Hasbro chose these two characters (especially with the Baroness’ availability and price point) I’m just not sure I needed them in my collection.

I will say, however, things get a lot more interesting when you start talking about Lady Jaye and Gung Ho. Especially Gung Ho.

Let’s take a look at Lady Jaye first — while Destro and The Baroness seemed to just sort of commit to whatever they were trying to achieve, Lady Jaye went all in on the homages to the original 1985 action figure. The lime green uniform, the lack of the hair to replace her hat, the NEWLY TOOLED OLD SCHOOL CAMCORDER not to mention her backpack. Yeah, whatever corners Hasbro cut they built back up.

As much as I’d prefer if Hasbro try new concepts and new ideas it’s tough to argue that having a 6″ update to the ’85 figure doesn’t have at least a little bit of a “cool factor”.

Now, taking nostalgia out of the picture entirely, I think I prefer the original release. I’d much rather have the swappable hair/hat combo, the more modern backpack-mounted camera and the slightly more toned down, realistic colors. I will say the execution on the face painting on the Retro Lady Jaye is great improved, however.

This brings us to Gung Ho. Far and away the shining star of the Retro series thus far, Hasbro threw everything they had at this Gung Ho update and stuck the landing.

Personally, I really liked the original Gung Ho release– it was during a short window of time where Hasbro was trying some new things, not beholden to vintage ideals, and I kind of liked that approach. It meant each new figure had a potential to bring something legitimately new to the table, rather than everything being, more or less, pre-ordained. Sure, Gung Ho came with some clunky weapons and his hat wasn’t 100% adherent to the Marine Corps standards, but the darker colored uniform, the modernized vest– the slightly retooled facial features. It all worked really well for me, though I acknowledge others weren’t wild about it.

And, you know, as much as I say I love the modern and scoff at the vintage accuracy of some of these figures– tough for me to say that the Retro Gung Ho isn’t pretty cool. Yeah his colors are bright and somewhat unrealistic, yeah, there isn’t quite as much originality at play. But the figure works.

Hasbro clearly invested a ton of new tooling dollars into the figure, giving him a new head, new hat, new backpack, new vest, new grenade launcher, new holster and grenade pouch. The entire figure could have easily sold in a box at MSRP rather than the Wal-Mart Retro line and I suspect almost any Classified fan would have paid up. It is, more or less, similar to Heavy Artillery Roadblock, a vintage looking figure etched in 6″ scale with a modern aesthetic.

What started as mostly a curiosity for me has somewhat surprised me. Initially I hadn’t really considered buying any of these, yet somehow I ended up with all four in my collection and while their usability might be in question, they remain fun additions to the Classified line.

Without a doubt, I would say anyone who owns the existing Baroness and Destro don’t need to bother adding those two Retro figures to their collection, however both Lady Jaye and Gung Ho have significant additions to their figures and are both worth at least considering, in my mind.

I suspect the majority of fans will eagerly acquire Gung Ho and to a lesser extent Lady Jaye, though they might very well (and rightly so) pass by Baroness and Destro.

I know this wasn’t a full-blown review, but in truth, the majority of these figures didn’t have enough changes to warrant a full individual review and rather than just focus a review on Gung Ho and/or Lady Jaye, I decided to write up a sort of “catch all” post covering the interesting and less interesting elements of these figures. While the reactions to most of the G.I. Joe: Classified reveals were positive, far and away Destro garnered the most enthusiasm. Whether that was because he was so close to his vintage roots or the figure just looked amazing, I’m not sure, but regardless, he was the highlight based on fan opinion.

He comes close to the cream of the crop for me. Very close.

I can’t quite enter the words for how this Destro makes me feel. I know there have been many stalwart 1:18 scale faithfuls who have turned their noses up at the six inch figures, which they have every right to do. But I think this Destro may just be great enough to convert at least some of them!

Various online retailers reveal Destro today with the surprise launch of a pre-order for this figure, long rumored to be a part of the first wave of G.I. Joe: Classified six inch figures. He appeares to be available at several of them right now, most notably Big Bad Toy Store and In Demand Toys (which is based in the UK).

EDIT – He is also now available for pre-order on Hasbro Pulse!

Drool over the mighty images below, but be sure to hit that pre-order link, these things are a hot ticket!

There isn’t a whole lot of new G.I. Joe product to captivate fans these days, but high end statue maker Prime One Studios has some pretty fantastic looking items coming out, including an amazing statue of Destro, the enemy weapons supplier.

These pieces aren’t cheap, but they’d make for a great conversation piece, and Destro is now available for Pre-Order at Sideshow Collectibles.  Check out some of the images below.