Hasbro was still fully in the modernization mindset when they designed the COBRA Trooper to align with the initial assortment of Target releases and I couldn’t have been happier. COBRA’s backbone infantry unit was completely overhauled for 21st Century operations with layered body armor, a metal face mask, armored gauntlets and boots and a uniform rich with layered texture and awesome aesthetics.

At the time of its release, the COBRA Trooper was quite possibly my favorite figure of the line. Thus, when the COBRA Officer was announced, I was greatly anticipating the eventual reveal, but also, at the same time, a little cautious. What would they do? Simply repaint the trooper with the trademark silver sigil? Or would they make some other, more dramatic changes that might create unnecessary separation and division from within the COBRA forces?

Turns out, I needn’t have bothered to worry– the Hasbro designers in charge of G.I. Joe: Classified have quickly become some of my favorites and the COBRA Officer is a perfect reason why.

First of all, no Hasbro didn’t simply throw a silver logo on the COBRA Trooper and as much as I love the COBRA Trooper (and COBRA Infantry for that matter) I couldn’t be happier that they went in a different direction with the officer.

First of all– yes there are some connections to the trooper, which is exactly what you’d expect and want for the Officer. With similar blue hues to the uniform, he also has some of the same added texture to his balaclava, his arms and his legs, which immediately makes that much needed connection to the larger group of COBRA Infantry. The effective balance of black on blue, as well, especially on the shoulders and near the collarbone adds a nice divergence of color and breaks up the standard canvas nicely, adding more detail to the sculpted texture and some deviation from what could have been a bland, monochrome color scheme.

But, of course, they removed the bulkier battle armor, taking him a step away from the front lines, instead using web gear on him that’s somewhat similar to the old school officer, but with a bit of a modern touch.

With the opened “V” of the web gear, you can see the uniform beneath, featuring a smooth surface tunic with a nice rank ribbon on the upper chest, immediately adding a sense of significance to his position, settling him firmly in a stance of leadership among the other cadre of troopers. It’s a small touch, but a great one.

Along with the tunic and web gear, the lower half of his facemask is now a smooth cloth rather than the armored look, just as his gloves and boots look like more natural leather rather than next generation armored tech. The result is an update to the COBRA Officer which looks a bit more “real” but at the same time still blends in almost seamlessly with the existing trooper base. It’s a pretty great symbiosis between different techniques and they pull it off perfectly.

With a look closely aligned with the Trooper, I’m happy to say the Officer actually retains better articulation, specifically due to the thinner straps used for the web gear rather than the huge, full-torso battle vest which restricts movement on the Trooper and Infantry.

Elbows, knees, hips, all the rest of the requisite joints are present and accounted for and work really well, allowing for a wealth of various poses and positions. I didn’t notice any real stiffness or hindrance to range of motion and the various battle ready stances or gun-firing positions all worked really well.

It seems like so long ago that Hasbro seemed wholly unwilling to put realistic weapons in with their figures. COBRA Officer comes with an AK-47 with removable magazine and scope, as well as submachine gun with a second removable magazine, a knife and a pistol. As Hasbro as done throughout the Classified line, there is room on the figure for all of the various accessories, which is an excellent detail, though I’ll admit it was a bit difficult to get the scope and the magazine where they belonged in the back of the belt.

A separate sleeve backpack is included as well, which will fit either weapon nice and snug, allowing for some customizability when it comes to which weapon he’s holding and which one he’s saving for later.

It’s not an extravagant assortment of various weapons, but simple and functional, even if the pistol seems a bit old school for the modern Officer to carry.

I had several different expectations when it came to the inevitable Officer release and somehow Hasbro eschewed them all and managed to surpass them all at the same time. The web gear, the various different smooth and rough textures throughout the body sculpting, the similarity, yet differences to the Trooper cadre– it all comes together to give us a spectacular version of the Officer which simultaneously adheres to classic tropes while at the same time bringing in plenty of more modern twists.

The COBRA Officer, in its unique and somewhat simple way achieves precisely what I’ve wanted Classified figures to achieve– latch on to some of that vintage inspiration that brings out the nostalgia, while at the same time not backing away from tying in modern elements that make it something new and different from an 80s faithful regurgitation.

They nailed it with this one and I’m thrilled.

The COBRA Trooper was an exceptional modern interpretation, several steps apart from its vintage counterpart– in a time when Hasbro seems to be looking firmly toward vintage designs for inspiration, how would they blend the two aesthetics in the COBRA Officer? As it turns out, pretty darn well. The COBRA Officer takes some of the intriguing textural elements of the Trooper while adding some more old school “officer type” layers and creates a figure that, while reminiscent of the 80s, isn’t beholden to it. Yet even with those subtle vintage elements, they manage to modernize it enough to blend with the existing Troopers, a feat that was likely far more complicated than they made it seem.

Once again, GeneralsJoes contributor Mysterious Stranger comes through with some very nice, well detailed reviews of recent Sideshow Collectible releases.  Knowing I don’t have the budget to get my hands on this stuff these days, he’s right on the ball, this time covering the Sideshow Cobra Officer and Cobra Sniper all in one shot.
Click the “Read the Rest of this Entry” link below to check out his review!
END_OF_DOCUMENT_TOKEN_TO_BE_REPLACED

Sideshow Collectibles has sent in their latest newsletter, and revealed that they have a great, in depth “Backstage Pass” for their upcoming 12″ Firefly action figure.  Follow the links below for anything you need to know about the Cobra Saboteur!

Also, Sideshow notes that they currently still have Cobra Officers back in stock for a Second Chance opportunity!  Also interesting to note is that the 12″ Cobra Sniper and Cobra Commander are both in stock as well.

Next Sideshow 12″ Figure is the COBRA Officer!

Sideshow Collectibles latest newsletter has arrived, and as promised, there is plenty of news inside!  First, and most importantly is the revelation that the next 12″ offering from Sideshow is none other than the COBRA Officer!  They also reveal that pre-orders will begin July 9th.  In the preview, Sideshow also shows off an impressive new wallpaper that you can see below. 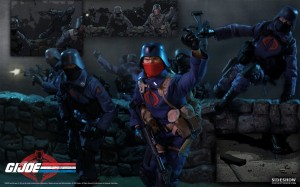