This week has been all about the upcoming Snake Eyes movie here at GeneralsJoes, and the review section is no different.

While the official release date for wave 1 of the Snake Eyes movie figures seems to be a short ways away, a few retailers overseas have already received initial stock, and being the impatient, hungry fanboy that I am, I braved some exorbitant shipping costs to get these bad boys in my hands just as soon as I possibly could.  And you know what?  I don’t regret it one bit.

Maybe it’s the desperate fanboy in me, but the minute these figures arrived (coincidently enough, the same exact say the latest Snake Eyes trailer was unleashed onto the Internet) I immediately tore them open and dug right in.

Well– to be fair, I did pause for a moment to take a few pictures, because, well– that’s what I do.

Now, I’ve seen my share of negative press for the movie figures already, even before folks have them in hand, and I can certainly understand.  Fans are, by and large, resistant to change and while G.I. Joe: Classified has been making some very welcome strides toward meshing modern style with vintage aesthetic, the movie figures are going whole hog into the 21st Century and are obviously beholden to the designs that we expect to see in the film.

This version of Snake Eyes will never be mistaken for one of your favorite 1980s or 1990s classics, but in truth, that’s okay.  There’s nothing about this figure (or the movie for that matter) that invalidates your childhood memories.  Both things can exist.

I suppose I’m one of those rare fans who actually enjoys both the old school and the new.  Don’t forget, I was one of the ones who was all gung ho (no pun intended) about Sigma 6 right off the bat.  Back in those days I suffered my share of ridicule, but if you survey G.I.  Joe fans now, they seem to have a fresh perspective on Sigma 6 and are willing to admit there were some awesome things about that line.

Ripping this figure from its plastic prison, I tried to keep myself from getting all amped up about “new toy smell” because I do have a tendancy to fall headfirst in love with something just because it’s new.

I’ll state right up front — this action figure is not perfect.  It has faults.

But, considering I just saw this character come to life on the computer screen (and may have watched the trailer dozens of times today alone) I have to say it was pretty damn cool to get it in plastic form, today of all days.

Right off the bat, the figure feels and poses much “sleeker” than some of the other Classified figures.  While many of those other figures have thick vests, stray belts, holsters and other items, this figure is pretty much just straight tooling with a pretty slim-fitting shoulder rig.  That’s not necessarily good or bad, but the figure felt exceptionally “playable” straight out of the box.

I will say, at first touch, the plastic felt a little– cheaper maybe?  It had a lighter heft, a somewhat thinner feel, but posing certainly worked flawlessly and gave me no problems with stuck joints or range of motion.

I had an absolute blast posing and playing with the figure (yes dammit I still play).

One note about articulation — for reasons I’m not entirely sure of, the figure has no calf-swivel.  I imagine that was mostly for decorative reasons because the sculpting had to match the movie aesthetic, but it is sort of a bummer as that’s one area of articulation that most other figures have that this one does not.

The issues with the calf swivel aside, this figure is exceptionally well articulated.  Pretty much every single joint you’ve come to expect with G.I. Joe: Classified is present here, from the drop-leg hips to the double elbows and knees, grasping hands, double neck ball, rocker ankles, the whole nine yards.

I was able to get this figure in almost every single pose I wanted to, even without that extra swivel at the calf.

The sculpt is absolutely amazing as well.  It truly looks as if this figure stepped out of the trailer and landed in my hands.  I’m not sure I can do the figure justice– once you get a good look at it, you can really see all of the intricate padding and textures come to life, the various different materials almost flawlessly translated from real world fabric to plastic.  There are some shades of the G.I. Joe: Retaliation design here, too, with the padding on the ribs and the extra thickness at the sides of his helmet, but purely from a sculpting perspective, this figure is spectacular.

Of course I feel like I have to talk about the color scheme as well, even though– well– there really isn’t much of one.  The beauty and history of Snake Eyes is that he wears all black and that’s what we’ve got (well, along with a stark red Arashikage logo on his left shoulder).  I do think they do a good job adding just a little gloss or shine to some of the figure parts based on texture and sculpt, but beyond that, the figure is pretty much just black, as he should be.

Okay, so what about his gear?

In truth, Snake Eyes’ accessory compliment is a bit of a mixed bag.  Don’t get me wrong– he’s got the Morning Light sword, which is critical, he’s got the absolutely incredible Henry Golding alternate head (which I’m pretty sure is staring directly into my soul), and he’s got some trench knives, which are a really great callback to Snake Eyes history.

Not a huge amount of accessories, though, and I was a tiny bit disappointed that he didn’t have some way to carry the knives.

Ultimately, however that feels like a nitpick.  What else does the figure need beyond the sword, sheath, face and knives?

Of course, therein lies some fandom conflict, anyway–  I’ve seen many comments online that Snake Eyes with a “face” just isn’t Snake Eyes.  Honestly, I don’t really understand that perspective.  I mean– even in the comics Snake Eyes HAD a face.  Hell, Larry Hama even showed it a few times.  It’s been clearly stated that this film occurs before Snake Eyes’ face is scarred, so it only makes sense to show it, and when the sculpt is as eirily lifelike as this?  Pretty tough to complain.

In all seriousness, they did an amazing job with this head sculpt.  Just like the figure itself, it feels as though Henry Golding stepped straight from the television screen and threatened to kick my ass in my living room.

Whatever your opinions are about Snake Eyes having an unscarred face, considering the film as the source material, Hasbro knocked this one out of the park.

I also really love the worn metal deco on the trench knives, and even though he doesn’t have a place to store them (and they’re not spike-knuckled) I am really psyched that Hasbro thought to include them.

Though, considering the scene with Snake Eyes reaching out the car window during the trailers– would it have killed them to include an Uzi??

G.I. Joe: Classified has really been coming into its own in recent months, and while I think some fans see the movie figures as maybe being a step back, in my opinion they work perfectly for what they are.  I mean, there is a big budget Hollywood movie coming out, of course Hasbro has to do figures in that style, and honestly, I wouldn’t have it any other way.

This figure will never get mistaken for a classic iteration of our favorite G.I. Joe Ninja Commando, but honestly, that’s okay, because he is a fantastic representation of the film version of Snake Eyes and even for folks who aren’t into the film there’s a ton of love and quality that went into the design and construction of this figure and some really great fodder for potential customs.

This is really good stuff and I am in total MOVIE HYPE mode.  July 23rd cannot come soon enough! 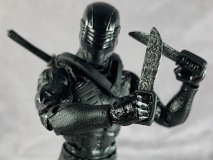 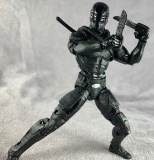 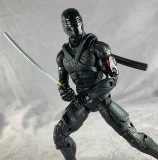 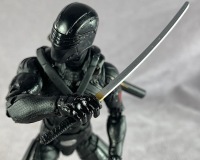 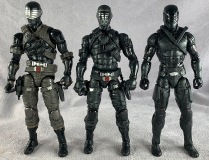 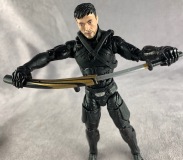 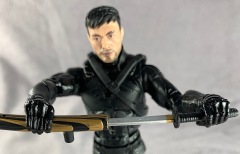 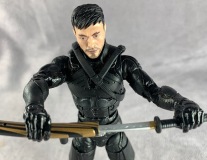 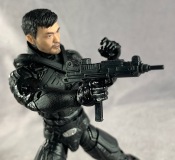 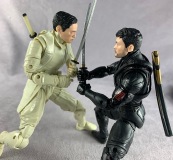 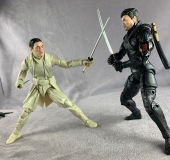 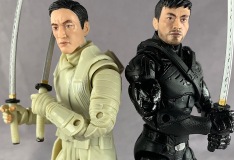 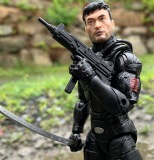