First impressions are funny things...I remember when Hasbro first announced the Anniversary items and Storm Shadow was the lucky victim that got shown first. I immediately figured he would be my least favorite. I have a thing for the military aspect of G.I. Joe and as cool as the ninja element can be, I prefer my soldiers and armed terrorists before my ninja uniform wearing martial artists. It's funny that now that I own a large chunk of these figures, I'd have to say this Storm Shadow is far and away my favorite figure of the line so far. 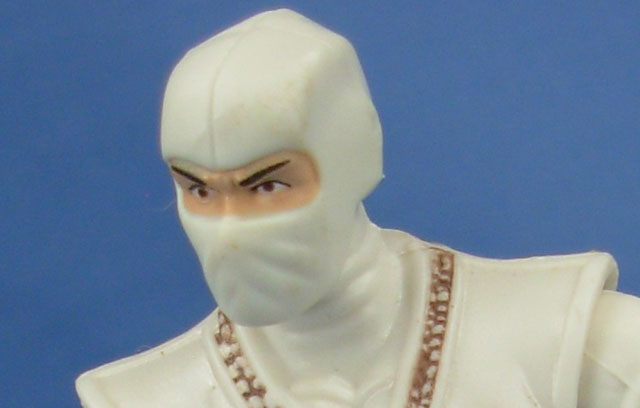 One look at the head sculpt, and the improved sculpting ability of the twenty-first century is immediately evident. I am firmly in love with the vintage sculpts...nothing will ever change that or replace them. But the head sculpts we get these days put the originals to shame from a detail point of view. The furrowed brow and determined glare...the slight lumps in the cloth where the hood rolls over the uneven scalp. Such simple details, but such fantastic sculpting. A great looking head sculpt. 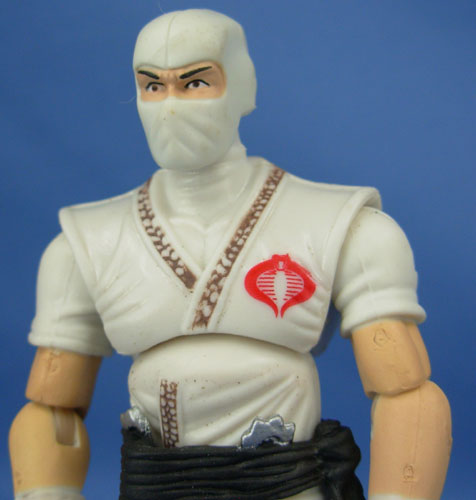 Like a few of the other figures, when standing straight upright, the mid-torso joint does draw some attention...some would say a bit too much. At first it does seem a little bit jarring, but once you're used to it, it's not such a big deal. Storm Shadow's uniform wrinkles mesh perfectly with his musculature, and the increased detailing on the uniform trim is a very nice touch. The short sleeves are an interesting touch (I'd almost prefer the bare arms) and overall, even with these changes the figure is a terrific homage to the original.

One of the most significant changes is with the sash around his waist. Whoever designed and sculpted this figure managed to carve a miniature "sheath" in his sash where a removable dagger can be stored! This is a great little feature in my mind, though the dagger does have a tendancy to get a tad bent if you wedge it in there wrong. Still that's a novel concept and I love that they included that. The throwing stars are not removable, but you can't have it all, I suppose.

Storm Shadow's forearm articulation comes in a somewhat strange spot, hitting right in the middle of his bandage-wrapped wrists. I'm not sure why they didn't just put the swivel above the wrap, but this isn't too bad either, and the important thing is that he has it at all. I can't get over what an improvement in articulation the simple swivel wrist or forearm is, and I long for the day when that addition might possibly be made to a vintage style figure...that would be near perfection. 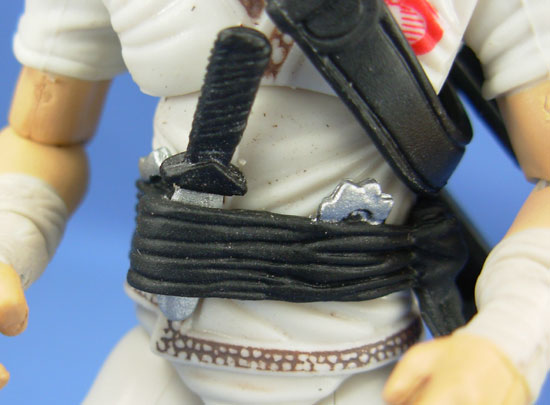 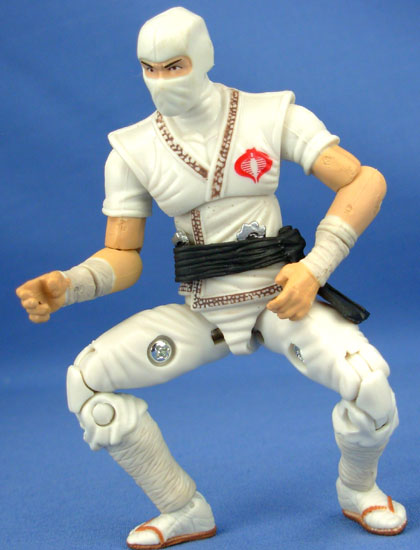 From the waist down, Storm Shadow's detailing continues to excel. The bottom portion of his uniform is patterned quite nicely and hangs relatively realistically below the sash, yet does not interfere in articulation. Speaking of articulation, Storm Shadow's hip joints, I'm happy to say, are nearly perfect! He's got almost the full range of motion in his hips and can sit as a normal figure would, which was a very nice surprise. The addition of the working hip sockets here only furthers my thought that this articulation adjustment is vitally necessary to whatever future figures we can work it into, as it just adds SO much to the overall enjoyment of the figure.

Beyond the hip joints, Storm Shadow's double knee joints work great and are extremely stable. He has good range of motion there and I feel no worry about any kind of perceived fragility in those joints. They really work great. For footgear, the COBRA ninja wears a pair of sandles that I think represent a pretty neat compromise. It's obvious that Hasbro tries to kind of walk the line between two different versions of figures if they're planning on reusing the tooling. It certainly appears that Hasbro gave Storm Shadow these sandles so that if they reused the mold for the version 2, it would look more natural. I have no problems with that at all, and the sandles make for an awesome change to the sculpt without taking anything away.

Overall the paint apps are great from head to toe as well, with a nice difference in shade between the white of the uniform and the duller color of the bandage wraps. There isn't a wealth of different colors here, but those colors that are used work very nicely. 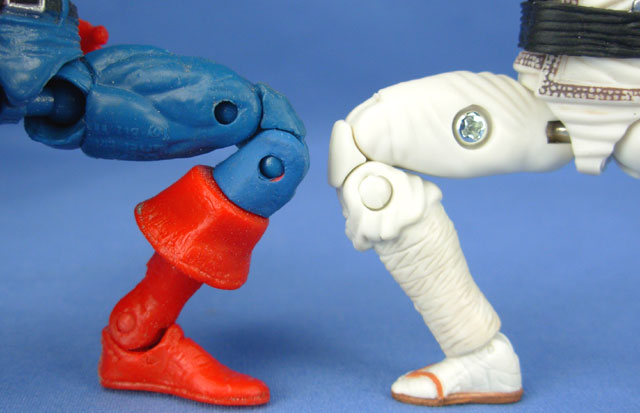 The joints are quite obviously better built on the Joe figure. The thicker pegs and knee pad really shows up here compared to the Showdown Captain America, and there will be no worry about floppy ankles with the Joe ankle joint.

Along with the quality figure, Storm Shadow comes with some very high quality accessories as well.

The COBRA ninja's familiar backpack returns herre with lots of great added detail. The two swords fit into the sheaths quite nicely and the knife slides into the aforementioned sash. The bow doesn't really seem to fit anywhere in particular, but I like that it was included. If it had been able to hook onto the backpack as it did originally that would have been ideal, but it doesn't make or break anything. Overall a very useful, functional, and accurate representation of Storm Shadow's weapon compliment.

My only minor gripe might involve the rubbery material used for the swords but that is likely something out of Hasbro's control. The blades are a bit floppy (though honestly not that bad) but other than that, I really love all of this gear. 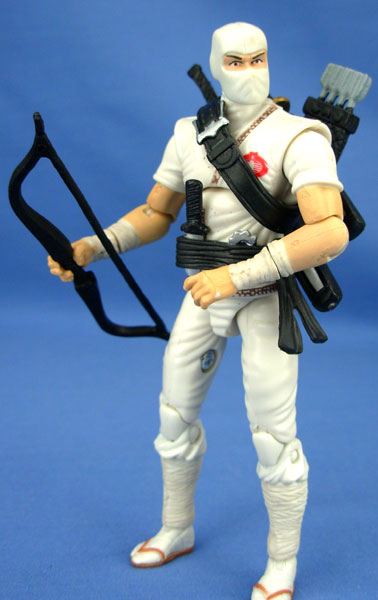 If you had told me Storm Shadow would be my favorite Anniversary figure back when they were all first revealed I would have told you you were crazy. But here as it stands, between his articulation, his appearence, and his accessories, the COBRA ninja hits on all cylinders. I really love this figure a lot, and it serves as a fantastic tribute to the chief representative of the Arashikage ninja clan. Nice work on this one, Hasbro. 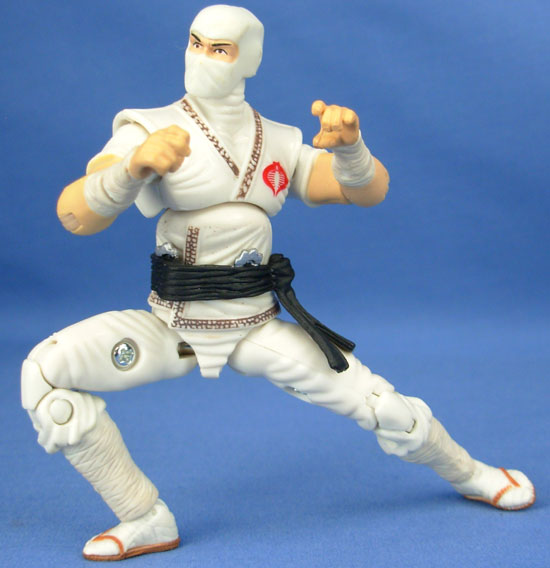 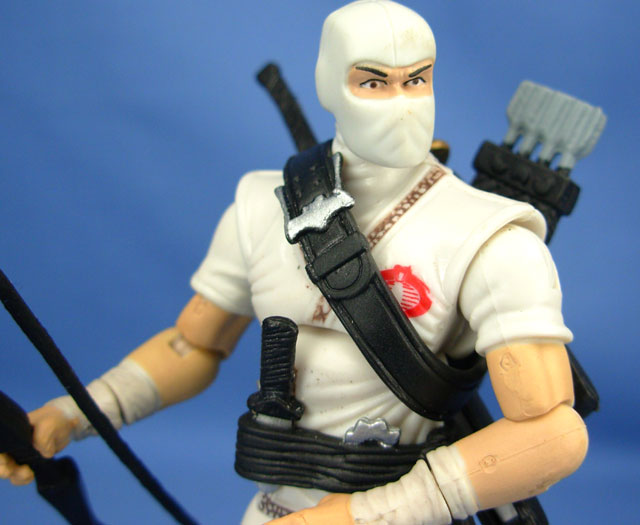 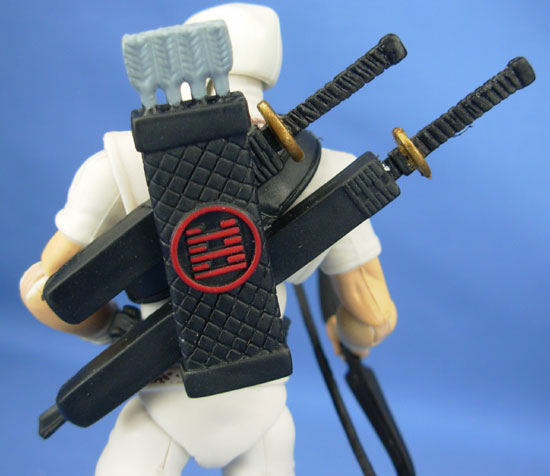 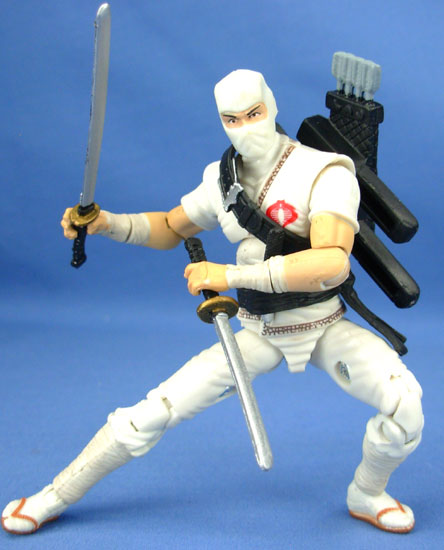 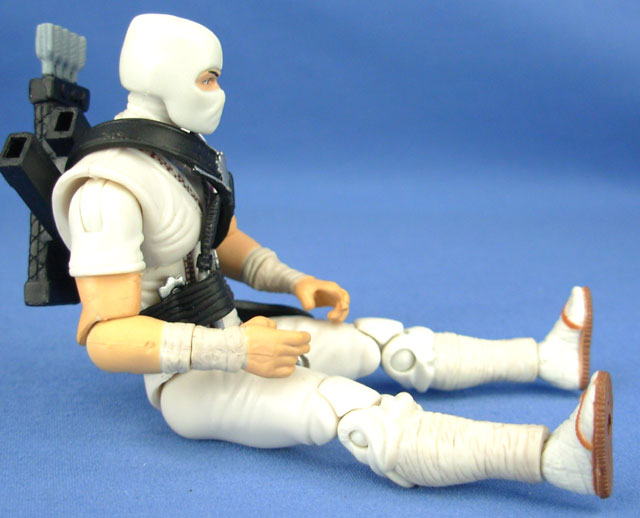 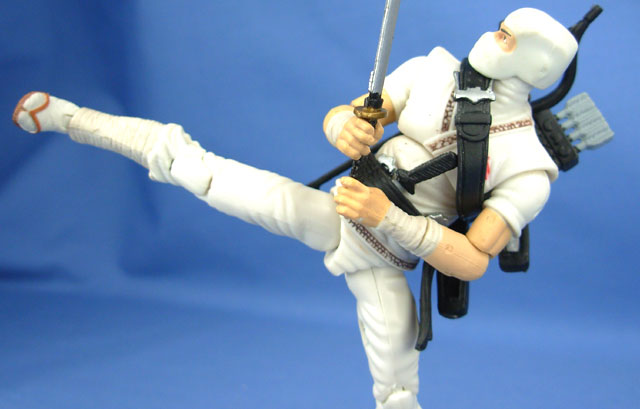 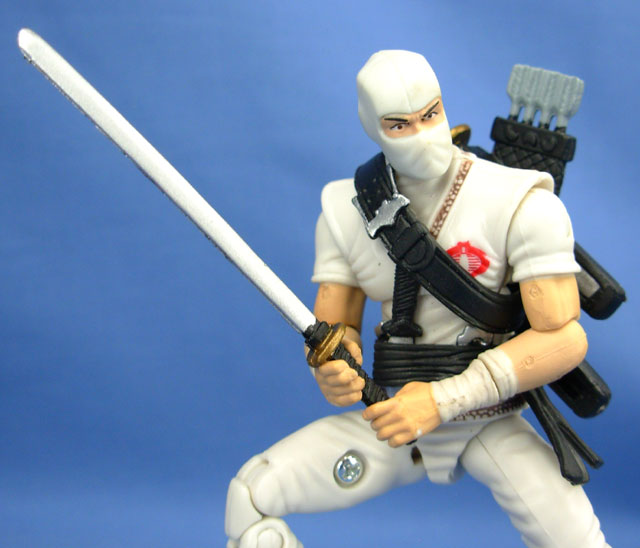 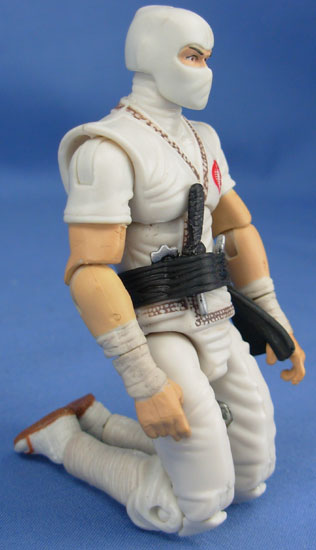