When we saw all of the figures originally, Roadblock was way up on the top of my list as one of my favorites, especially on the Joe side.  His original appearance has always been by far his most iconic look, but it’s been so undersized that it really didn’t portray the heavy machine gunner’s sheer size well enough.  Well, that’s no longer an issue.  This version of Roadblock is HUGE.

As with the other Anniversary figures, the detailing and sculpting on Roadblock is incredible.  His broad chest and well defined musculature immediately give him an imposing physique and impressive stature.  This is a guy that looks like he can tote around an M2 Browning. The simple sculpting of his camouflage tank top and khaki pants works very nicely, and I'm supremely impressed with the sheer numbers of paint applications he has for his camouflage. It looks quite authentic. That large pouch on his left thigh is a nice touch as well (though I'm not sure why his pistol isn't there). 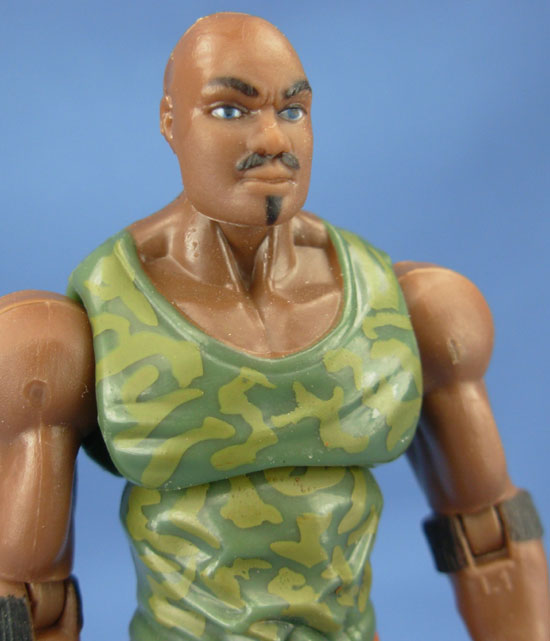 The sculpting isn't perfect, however. His head sculpt is a bit “baby faced” to be honest, and where most of the Anniversary figures are very well sculpted and nicely detailed throughout, I find a lot of details lacking here from the neck up. It's kind of "soft" and just doesn't really represent the character all that well. 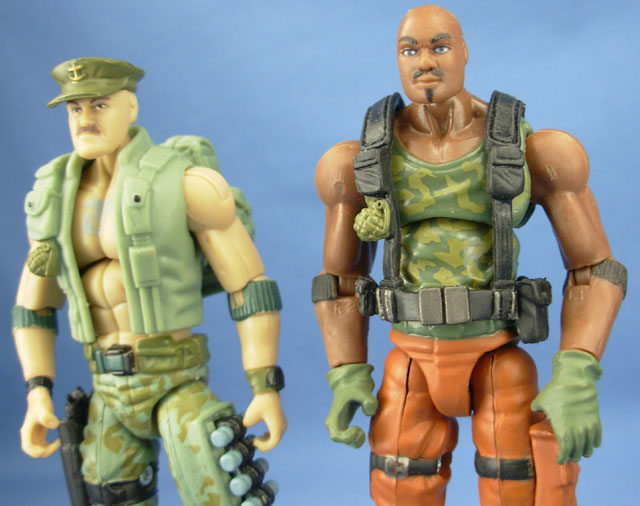 The torso and arms look great, just as Roadblocks should, and he’s got great articulation.  The mid-torso joint actually works very nicely in a figure of this increased size.  In fact, most of Roadblock is really pretty great.  However you do run into trouble when you look at his hands.  Roadblock’s hands are designed and sculpted to do one thing and one thing only…hold his weapon.  When he’s not holding his weapon, they just look kind of funny hanging there in those positions.  Not only that, but his right hand got a bit twisted in the package, so he doesn’t hold his weapon all that well either. While that isn't the fault of the designer, it is an unfortunate side effect of the softer plastic and dynamic posing in package.   It’s something easily fixed with some hot water, but I wish his hands had been sculpted in a more generic, natural pose.

Lastly, like Destro, this figure has no double knee articulation, which is a shame, and I’m not sure I understand the reasoning behind it. He does have the fully poseable hip sockets and joints which is definitely a very, VERY good thing, and gives me hope that maybe future figures will have it, but I'm not sure why Hasbro has the figures with the fully poseable hips with regular knee joints (instead of the double joints). I can't really figure it out. 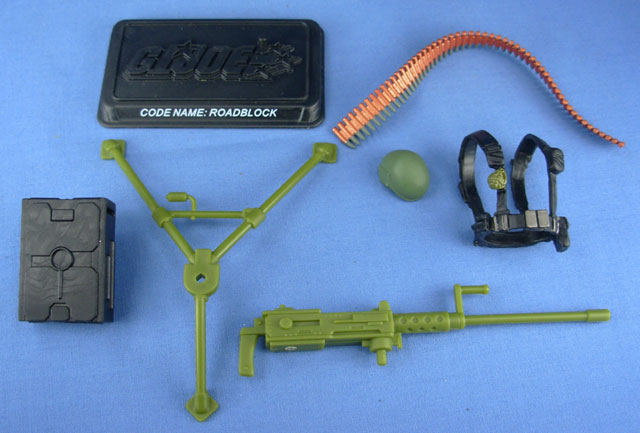 His weapons consist of his heavy machine gun, ammo pack backpack, machine gun belt, tripod and helmet.  Essentially exactly what the original came with (plus the machine gun belt).  All of the weapons are very nicely sculpted and work very well.  I do wish he held his weapon a little bit better, but the hands are so specifically sculpted that it becomes hard to have him hold it in any way except one very specific way, and even that one specific way doesn't work all that well. This could be due to the warping of the hand in the package, or because of the way the hands were sculpted in the first place, I'm not sure. Regardless, though, Roadblock's weapon is an essential component of the character, and it's a bit of a bummer that he has some troubles holding it well. 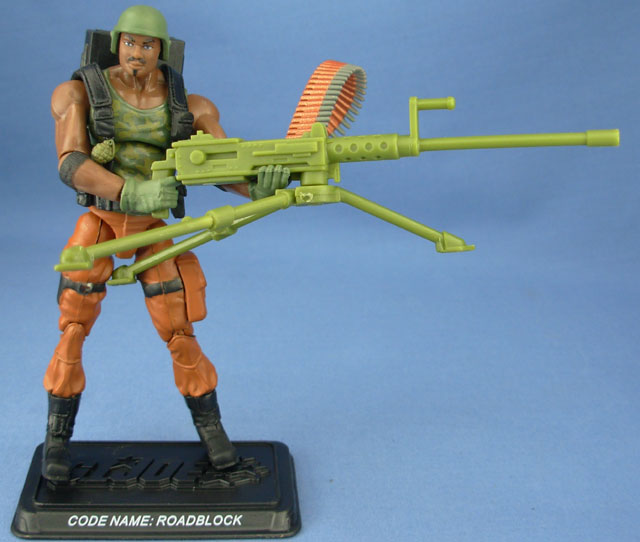 Roadblock was a figure I was extremely excited about, but my excitement has been tampered slightly by a few structural issues. I think with more generically sculpted hands, a bit more detail and strength in the head sculpt, and the double jointed knees, Roadblock would be fantastic. As it is, he is solidly sculpted all the way through, and for the most part looks quite impressive and imposing. But with some slight sculpting and posing issues here and there, it drops this Roadblock down a few notches. The increased hip articulation helps a ton, and the overall detailing is pretty great. It just could have been a bit better. 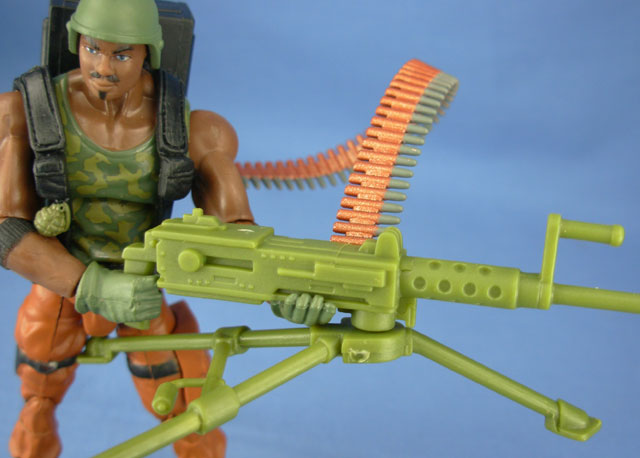 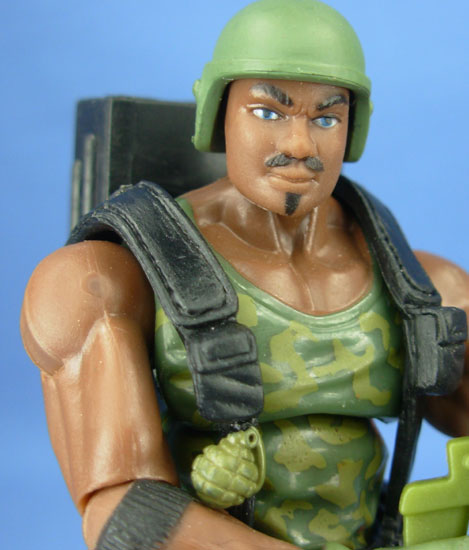 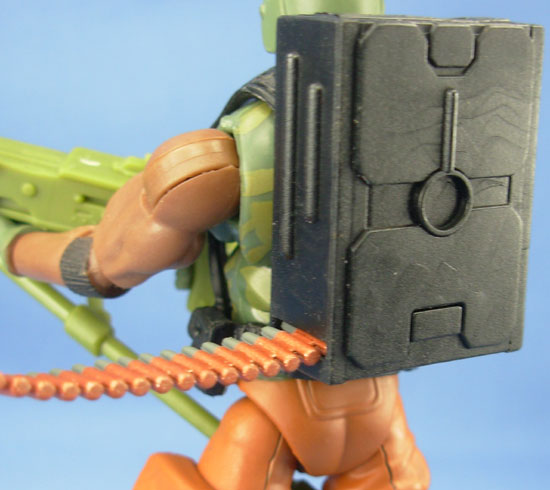 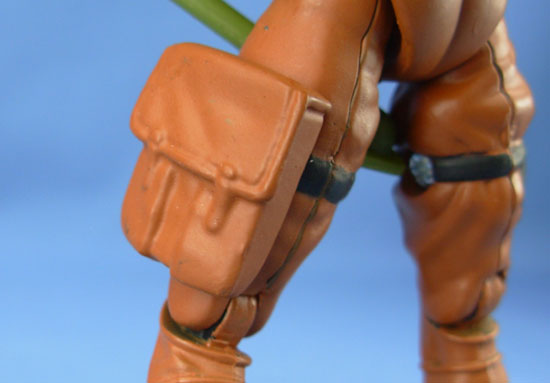 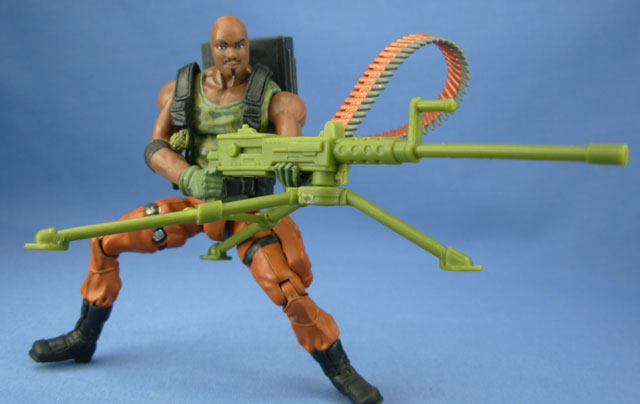 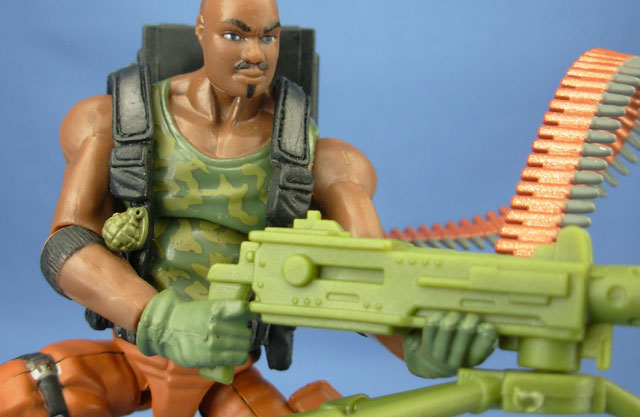 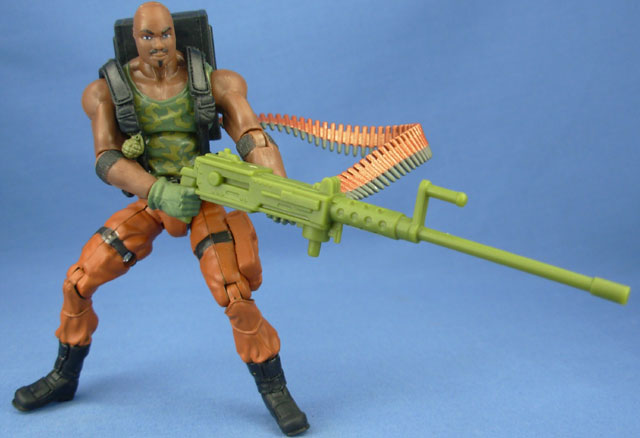 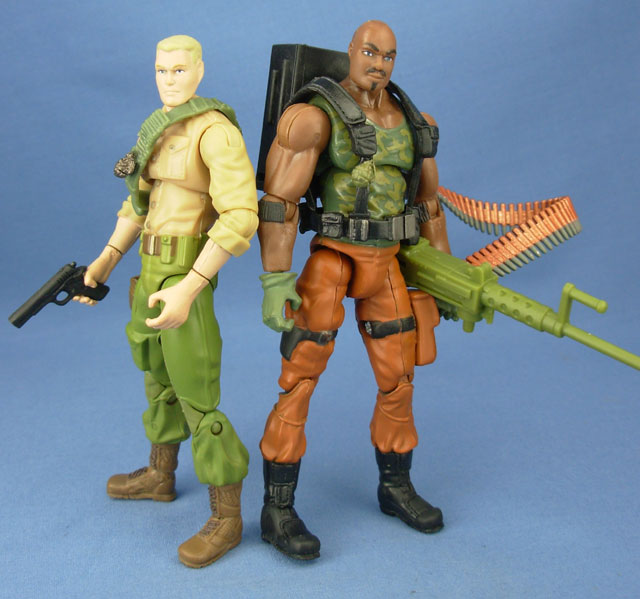 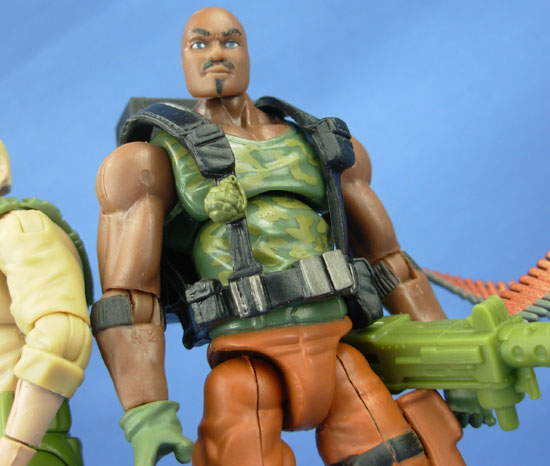 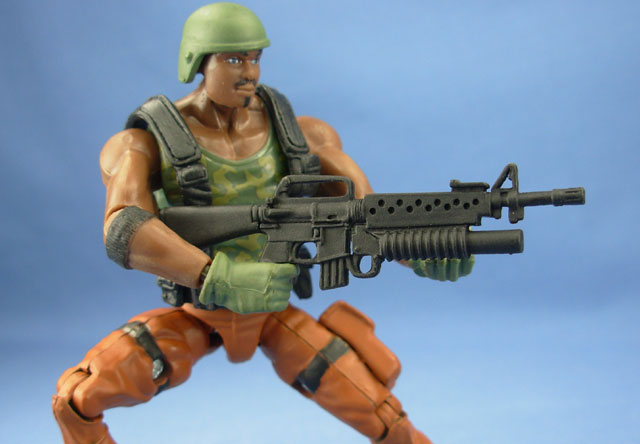 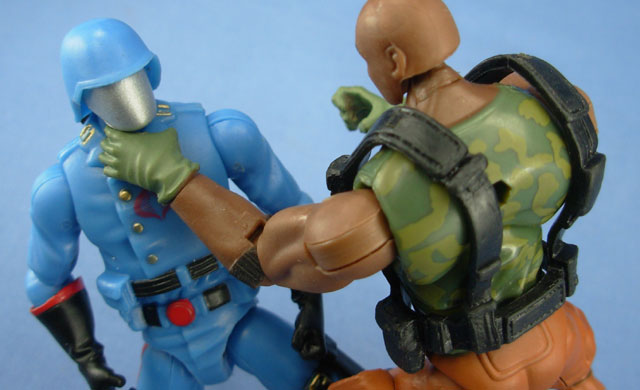 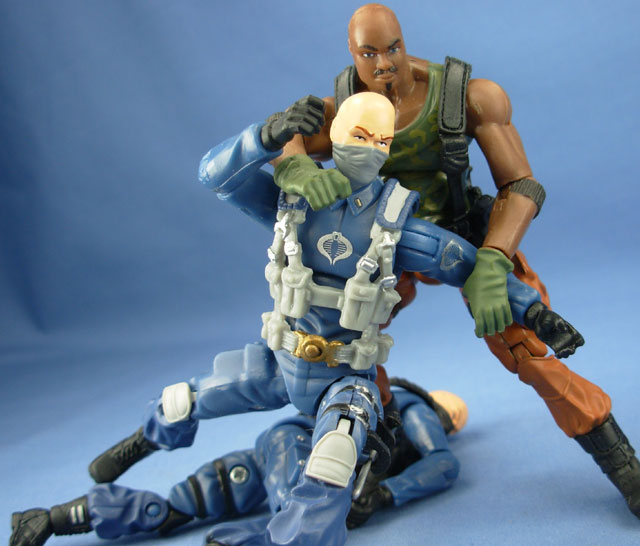 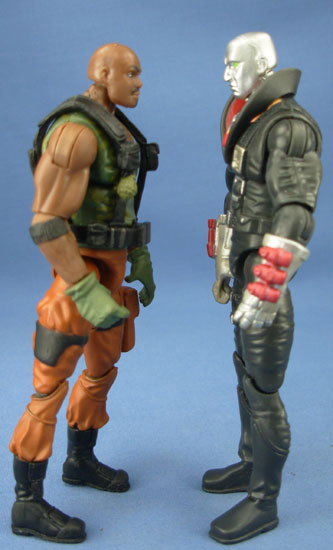 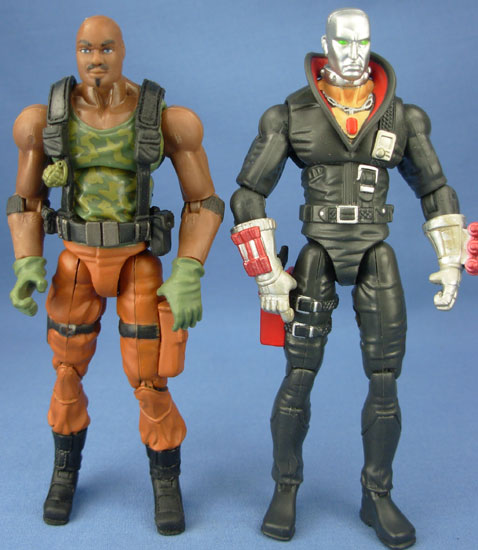 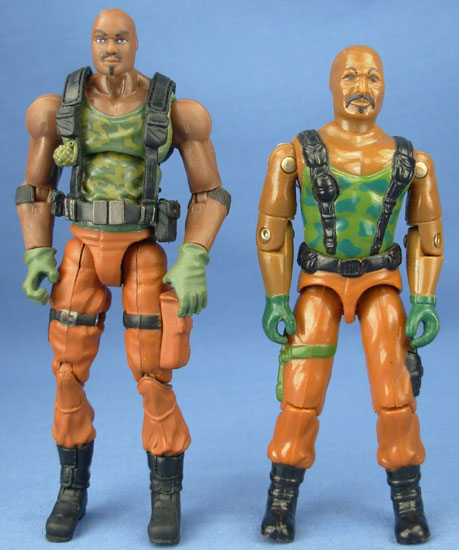