After I completed my reviews for the COBRA Battle Pack, I kind of sat back while I waited for my Joe pack to arrive.  I started reading reviews that came up and became a bit disconcerted.

First of all, a lot of folks were noticing faults with the figures that I hadn’t experienced…certain problems and structural issues that didn’t seem to be an issue to me, and at first I couldn’t really figure it out.  Elbows that weren’t free moving?  Gimpy hands (other than Destro)?  Can’t hold their weapons with two hands?  What?  Were these the same toys?

Well, when I finally did get my Joe 5-Pack in the mail, things started to become a little bit clearer.  Standing back and looking at things, it almost seems as if the two 5-Packs came at totally different times in the production cycle.  While the COBRA figures, by and large, really impressed me and made me happy (with the exception of 1 of Destro’s hands and the limited articulation in the hips) the Joe set left be a bit colder, at least from a "play" point of view.   Perhaps it’s because I’ve seen input from other folks that kind of made me look at things a bit differently, or perhaps it’s really because the Joe set is at a different point, quality wise, but whatever the case is, I found some issues with these figures that I didn’t really find with the COBRA’s.  The problems aren’t with every figure, by any means, and I actually find myself really loving a few of the Joes here, too.  However, there are some issues that should be pointed out.

One question that comes to mind, though...should these be considered "issues"? Are the restrictions mentioned here something Hasbro should be chided for, or have they simply made a certain decision regarding these toys? A decision that may end up making a lot of hardcore Joe fans angry, but a decision that may end up broadening the appeal of the line to a larger group of people in general. That decision has definitely been made, and while that may earn Hasbro a few negative marks on the minds of Joe collectors, it's a good possibility that the mainstream collector crowd will be more interested in the line because of it. Judging by reactions from many fans online who have gotten their hands on these already, it even seems as if a lot of the Joe collectors are pretty okay with the changes, too. 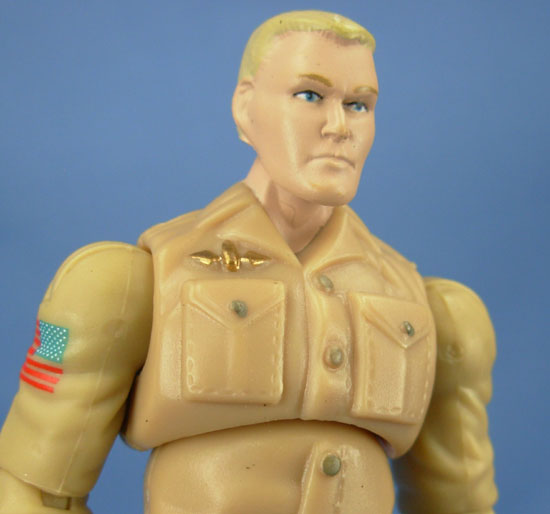 The first figure I messed with a bit was Duke. Upon first pose, the restricted motion of his arms is immediately evident, and quite unfortunate in my book, especially when he comes with a great new sculpt machine gun that he can’t really hold realistically.  From what I can tell, it’s the bunched up sleeves on his arm that kind of restrict movement and don’t allow the arms to bend more than 45 degrees.  Duke seems to be the only figure that it impacts this heavily (though Gung Ho isn’t perfect either), which at least is a good thing. This does, however, lead us to my previous thought, which involves certain decisions Hasbro is making with this line going forward. To me, and to most Joefans reading this review, limited articulation in the arm is a pretty big deal. He can't pose fully, he can't hold his weapon well, and he isn't very versatile. However to a great number of collectors out there, this isn't an oversight, it's a focus on aesthetics, which isn't necessarily a bad thing.

Since McFarlane toys started focusing on aesthetic over functionality, toys have more and more relied heavily on accuracy of image and somewhat less on how the toy actually moves. Marvel Legends (and G.I. Joe) have been a refreshing breath of fresh air, still striving to make toys that are as fully poseable as possible. Recently Star Wars has also started doing a lot more with articulation, but never at the sacrifice of how the toy LOOKS. It could be argued in the past that G.I. Joe sacrificed a lot of aesthetic qualities for the increased articulation. For something like the 25th Anniversary, which is being conceived of for a large number of collectors who are reminiscent of the 80's and are looking for ways to relive that, I think making certain changes to appeal to a broader crowd is a good thing. In most of these figures Hasbro does a pretty great job walking that line between aesthetics and articulation. In Duke's case they lean a bit too much towards the look and sacrifice a bit too much in the articulation department for my liking. And really, the argument could be made that increasing movement in his elbows (and hips) would not sacrifice that much aesthetically, but I can at least see where they were coming from. I should note, though, that when I say the toy loses "function" I don't mean from a durability standpoint, I mean from a movement standpoint. The toy can't move quite as much, so it loses some of it's appeal to the Joe crowd, but one great thing is that these figures retain alot of the toughness and durability, which is something a lot of other figures in this scale have problems with (namely Toy Biz's Marvel Legends Showdown line).

Duke’s head sculpt is very good, really capturing his character pretty well, and the detailing throughout the figure is pretty darn nice.  The tooling of his torso gives you a very authentic khaki shirt look, with his familiar airborne medal and rolled up sleeves.  I’m still not quite sure why the decision was made to put that swivel joint in the middle of his bare forearm, which ends up kind of sacrificing some structural solidity there, but beyond that, at least from a detail and sculpting standpoint, things look really good.  The only hitching point is the torso joint, which does give him kind of a disjointed look. The mid-torso joint is not a bad articulation point at all in my book, and I actually like it. However, it does take a bit away from the smoothness of the figure...this is a perfect example, though, of what aesthetic qualities Hasbro did sacrifice in order to maintain some nice articulation. It has mixed success, but ultimately I much prefer the articulation point there over not having it there at all. 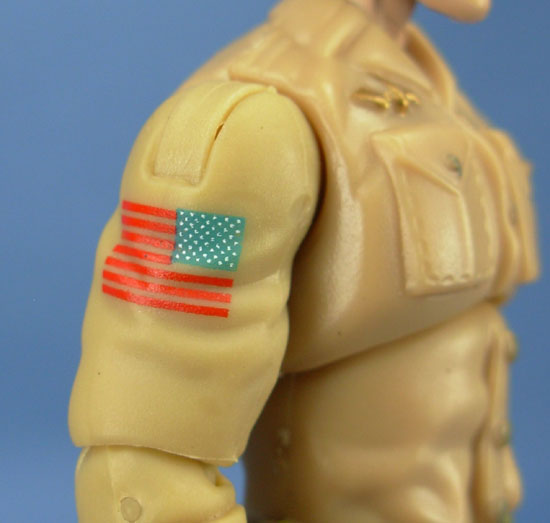 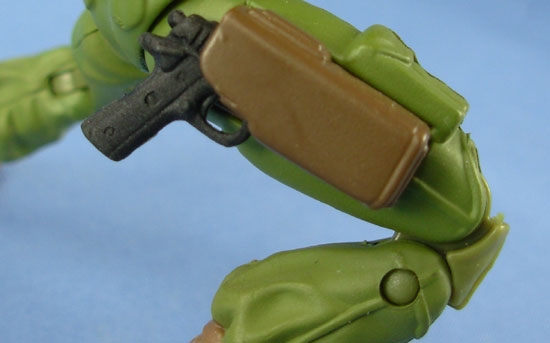 The rest of the figure keeps up that standard as well, with the great double-jointed knees and detailing throughout his legs and boots.  From a color perspective, the 25th Anniversary version is consistent with the Duke design we’re all familiar with, his tan dress shirt and light green pants. He's got a fantastic functional holster on his right leg, and from a sculpting standpoint, the entire Duke figure is simply impressive. Seams, wrinkles, pockets are all sculpted in meticulous detail and from a "looks" point of view, you can't help but be impressed. The lack of certain movement in the elbows and the hips is a drawback for sure, but the figure at least looks great solo, or in a group of others. 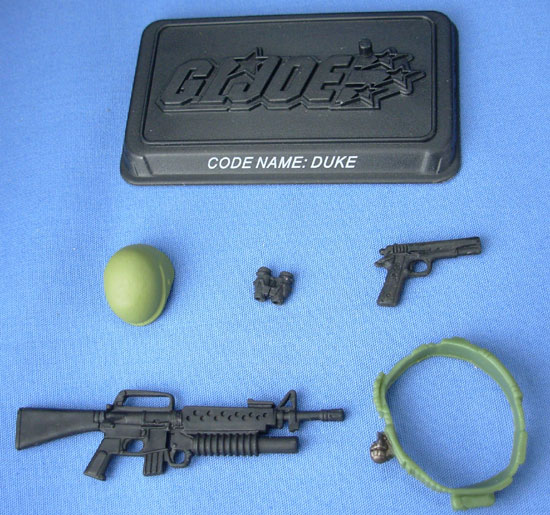 Duke’s accessories aren’t too shabby, with his newly sculpted machine gun, a pistol (that fits quite nicely in his holster), a helmet (that fits remarkably well on his head), a small pair of binoculars, and of course his trusty bandolier.  All of the sculpting and detail work on this gear is done pretty well, though the goggles are very small.  Every weapon fits where it’s supposed to (except in his hands...go figure). 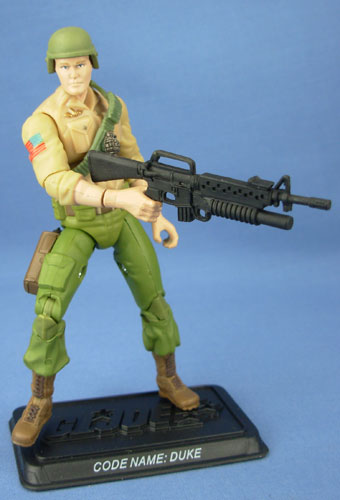 Duke kind of defines the thought process of the Anniversary line in general. Hasbro looked like they really focused hard on the detail work and sculpting involved on these new figures…and don’t get me wrong, that is very much appreciated.  Duke LOOKS great.  He looks like he was pulled straight from the cartoon or comic book.  However, Joe fans are more discriminating than relying just on how things “look”.  We like our toys to play well, too, and unfortunately Duke does not in some key areas.  He’s got that somewhat restrictive movement in his hip joints, and even more restrictive movement in the elbows, too.  I’m sure it’s something I can fix with an exacto-knife in about ten minutes, but I’d love these to be great out of the box.  Duke is not.  That doesn’t mean I won’t give it my best shot to make him better, I just wish I didn’t have to.

Where that leaves us, though, is how the rest of the general collector fandom will embrace these toys.  There are thousands of collectors out there who much prefer form over function and don’t necessarily care how much their figures move.  For years Star Wars has had a fraction of the poseability that the Joes have (until some recent figures) yet they are constantly lauded for looking so authentic.  For so closely resembling their on screen personas.  Well, it looks like that was priority number 1 here, design a toy that closely resembles an on screen (or on page) persona, and then work in articulation where you can and where it works.  While that may not mix well with us Joefans, time will tell how that goes with the more general collecting populace.  Let’s hope it leads to good things.  The more money these make, the better chance we see some tooling and articulation adjustments down the line. Luckily, I'd say Duke probably represents the worst of the Anniversary items for the articulation problems (though the females have their own issues, too) so we can only go up from here. And even as bad as some of the restrictions in movement are, the sculpting detail is still pretty fantastic. 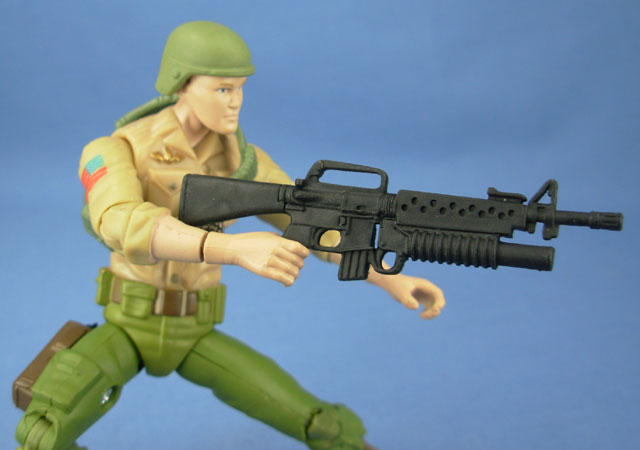 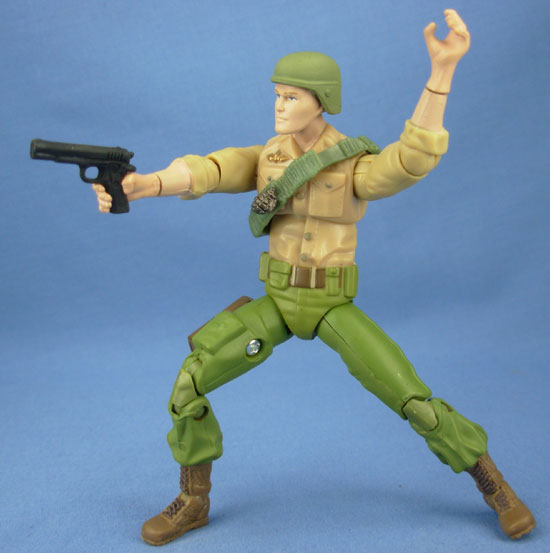 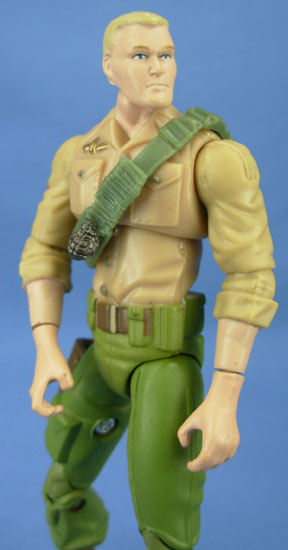 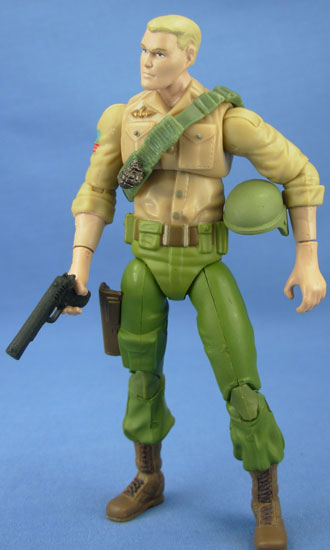 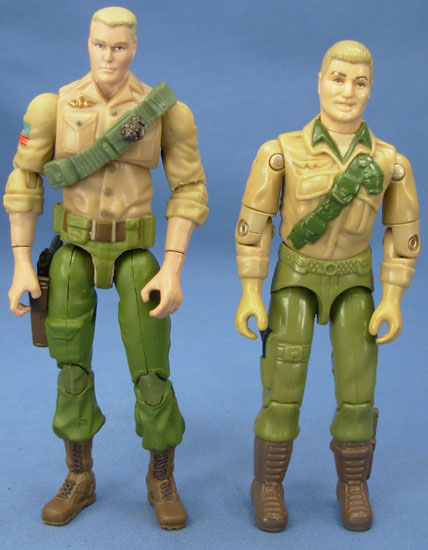 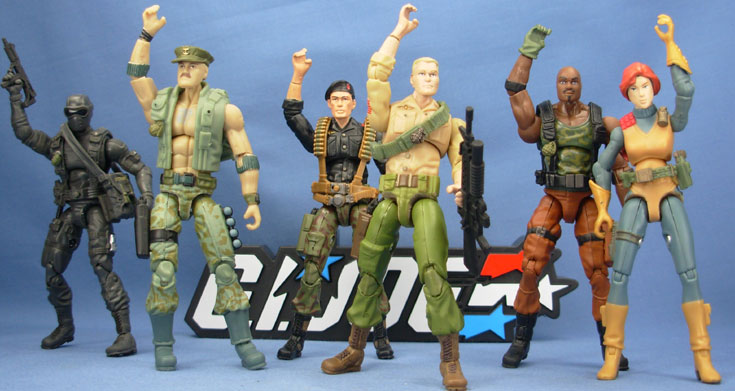 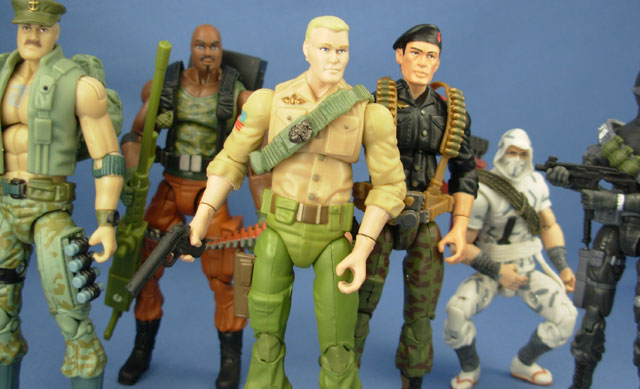 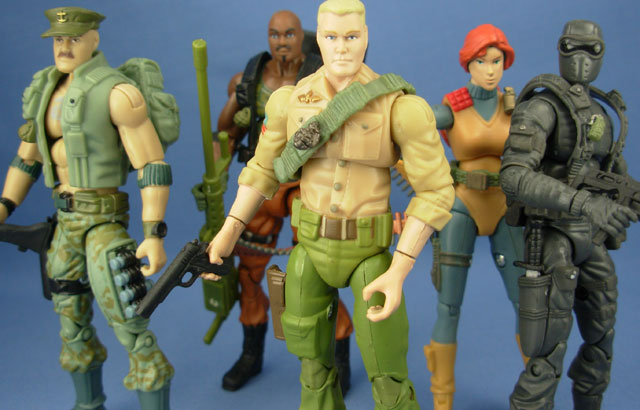 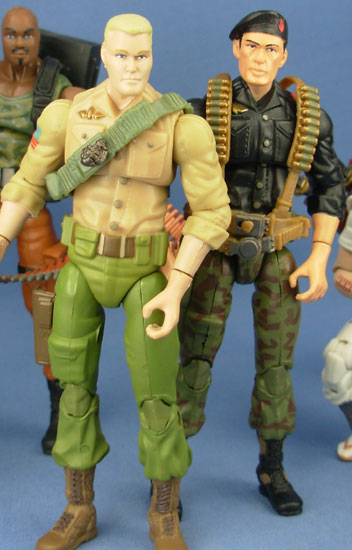 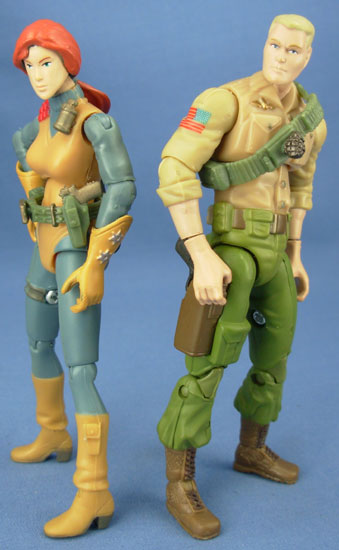 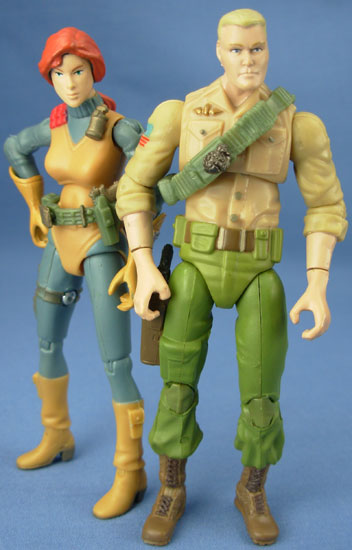 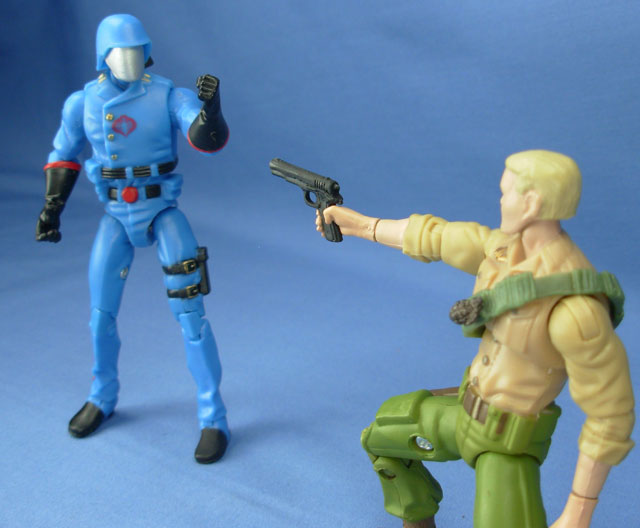 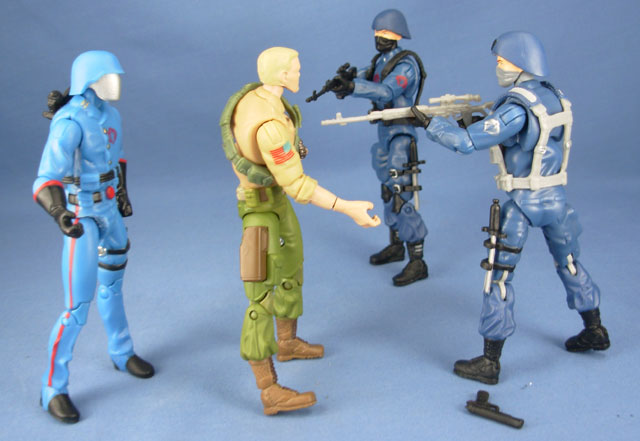 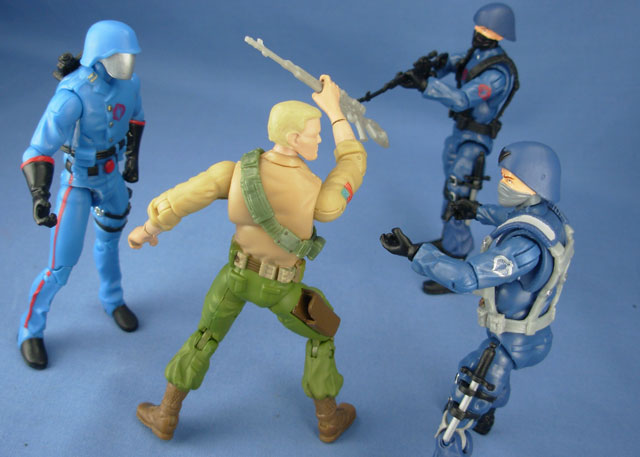 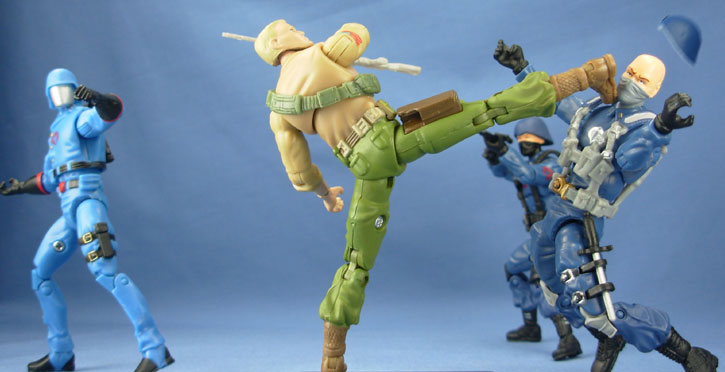 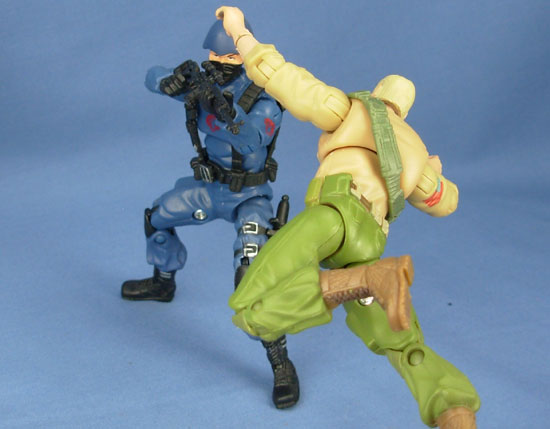 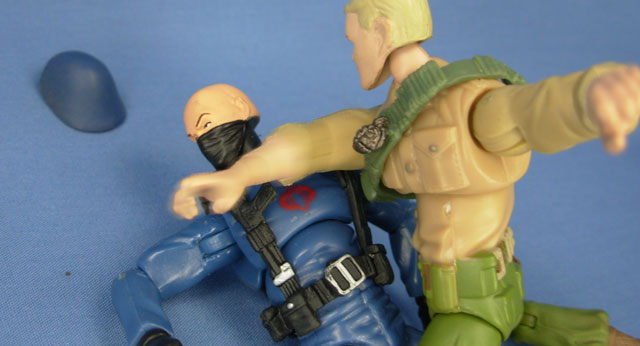 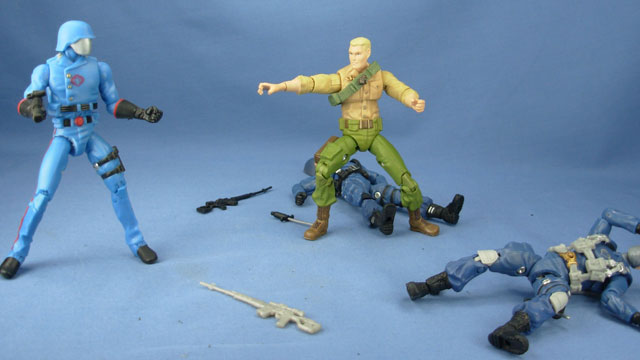