So it seems like forever since the Anniversary figures were first announced, and I'm sure it seems like it's going to take forever to see stuff from Wave 2...but finally the first batch of Anniversary figures are starting to hit. As usual when G.I. Joe tries to reinvent itself, there are conflicting opinions, and it's sometimes hard to stay neutral when everyone with a computer can tell the world what they think (including me!). Many folks would probably ask why G.I. Joe needs to reinvent itself, and truthfully I'm not certain, but I find some solace in the fact that at least this time around they really know their source material, and Hasbro is going to great lengths to try and appeal to the longtime fans of the property and present a toyline that is a terrific homage to what made A Real American Hero what it was back in the day.

Conceptually, I think Hasbro is hitting on all cylinders with this reinvention. As far as the execution goes, I do think we're seeing some growing pains and a bit of a learning curve, but Hasbro is still doing some awesome things with this line, and I think it has the potential to be incredible for long time fans, and also to fringe fans who aren't necessarily G.I. Joe diehards. If the property is going to be successful, it needs to grow, and Hasbro is doing a lot of things right to try and make it grow beyond the core fans. 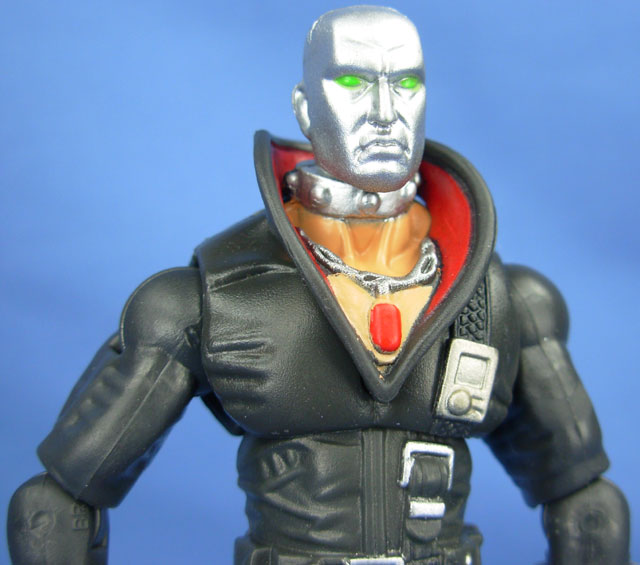 Destro is an icon to say the least, with his metal mask, tall red collar, and traditional black leather bodysuit. Still, as cool as the figure was when it first came out back in 1983, he never quite meshed with Destro's appearences in the cartoon and comic book. It seemed like he was always taller in stature, had a larger collar...was more imposing. Well "imposing" is this Destro's middle name, and I think Hasbro has done some great things here.

First of all, the plain-featured battle mask looks very, VERY nice. I really wish they had gone with the vac-metal chrome finish, I think that would have made a huge difference, but as it is, with the grimacing features, the green eyes, and the stern glare, this looks like Destro. His collar is sort of an amalgamation of how it appeared in various media, being nice and tall like the cartoon, but being thinner and more ridgid like the comic book. However they did it, I like the end result a lot, especially coupled with the metal bolts on his neck and the familiar medallian.

The textured strap over his shoulder, the walkie talkie on the chest, and the leather jacket stretched over Destro's musculature are all great little details that give the figure even more character, and help lend some credence to his intimidating frame. 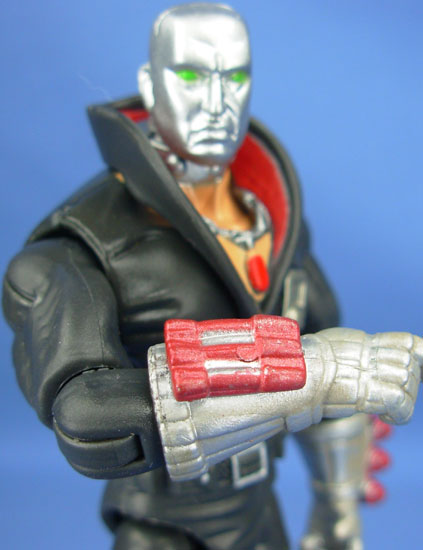 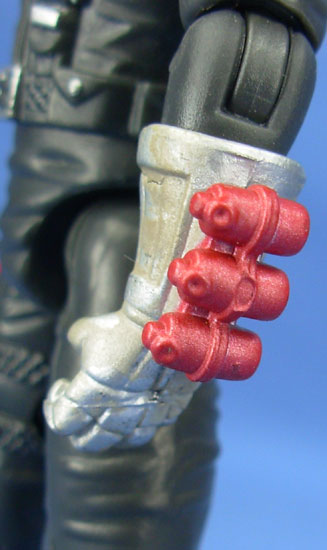 Two of Destro's most notorious features back in the day were his gauntlets, and again, it was something that was always better detailed in the comic and cartoon than it was in toy form, but that's changed now. The long, thick, armored gauntlets are very nicely sculpted and come complete with the wrist rockets and arm-mounted grenades, two necessary components to an accurate Destro homage. 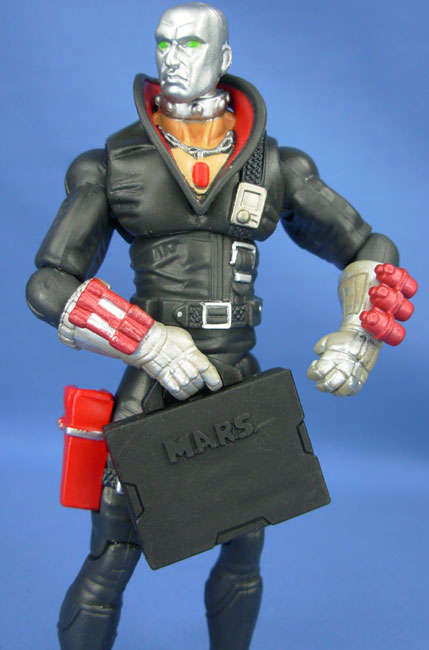 The same leathery texture covers the rest of Destro's body, and the belts and straps that are scattered about further match the strap on his chest, which brings everything together nicely. His boots are heavy and solid, and the red holster on his leg works well, just make sure you use it for the larger of the two pistols, as the smaller "stubbier" one doesn't fit.

For the most part, Destro is a very nicely sculpted figure. He retains all of the character from his previous incarnations, yet is translated pretty flawlessly to a newer "style". It's not a better style, just a different style, and one that plays to the nostalgic sensibilities of a large number of collectors inside and outside of the hardcore Joe fandom. The one downside to Destro would have to come with his left hand. It would appear as if that hand was sculpted to hold the briefcase he comes with, however at some point in the tooling process, the fingers sort of got fused to the hand. The result is a pretty tightly closed grip which unfortunately doesn't not prove very useful. At some point I may consider taking an exacto knife to the fingers, just to see if I can make it work, but at this point, regretably, it cannot really do what it's supposed to. This is likely one of those infamous factory issues that comes up and shows itself too late for any tooling changes to take place.

From an articulation standpoint, Destro works quite well. G.I. Joe has always been well known for producing figures that move and pose like normal human beings, and Destro definitely does. For some reason he does not come with the double-jointed knees that many of the figures do, however I'm happy to report that the deeper hip sockets he comes with at least allows him to move his legs into pretty much any pose the vintage figures can. This is sort of a sore spot with me with some of these figures, so I'm thrilled that Destro does not have this drawback.

His arms swivel at the gauntlets, and the rest of your standard articulation is there...he is fully poseable and a very fun figure. 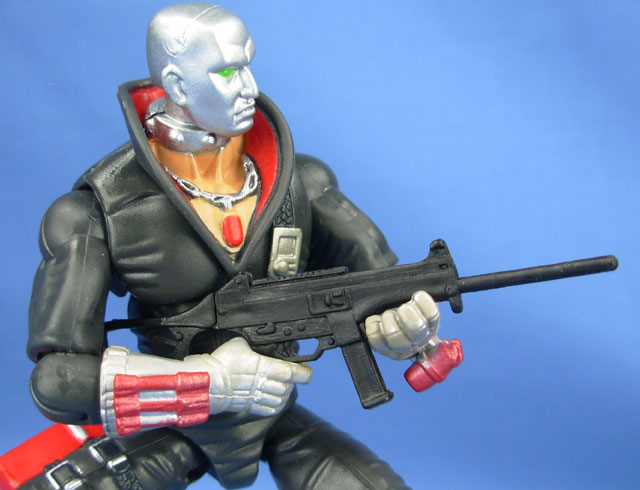 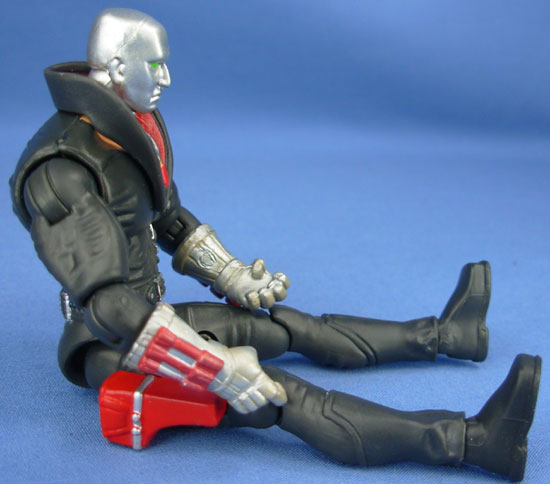 Being an arms dealer, I think it's critical that Destro gets accessorized with the right weapons, and for the most part Hasbro has done a great job giving Destro the gear he needs to do his work. 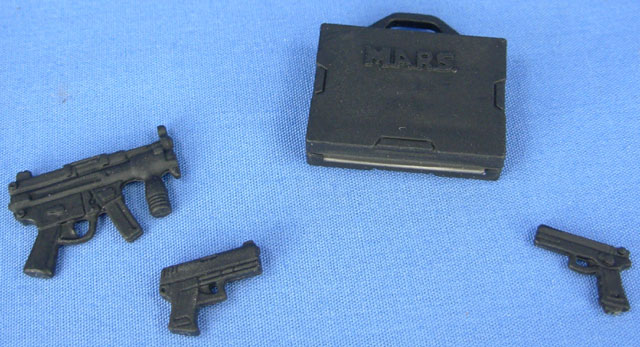 Coming with an MP5 (previously produced for the Valor Vs. Venom line in 2004) and two pistols, Destro already has plenty of firepower at his disposal. But for those times when he needs a special something to get out of a jam, the awesome M.A.R.S. briefcase he comes with holds a special surprise: 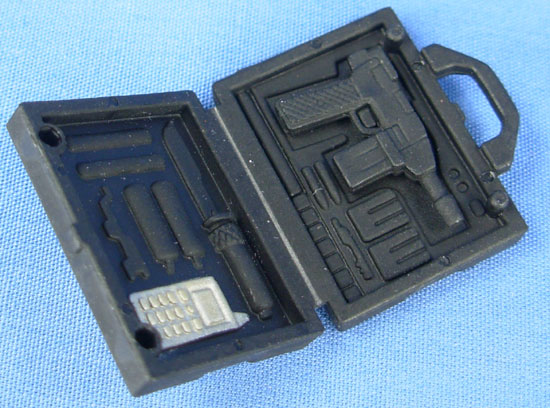 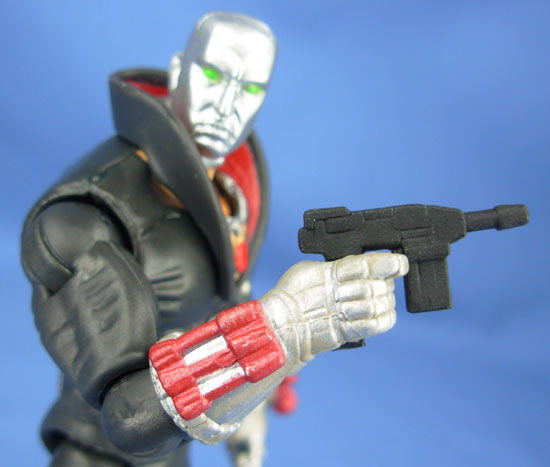 Yes, Destro's briefcase opens and it contains a removable pistol which is a pretty nice update from the original one he came with back in the day. It's a bit souped up, but the resemblance is definitely there and I love this little touch...it really adds another level of depth to the figure.

So far, so good...Destro is the first figure I've reviewed from the 25th Anniversary line (unless you count the pre-production Scarlett) and from an articulation and sculpt standpoint I'm very pleased with what I've got here. This figure is media-accurate, fully poseable, and comes with a wealth of play features that not only make him a great collectible, but make him a fun toy.

Now, there's been ongoing discussion all across the 'net about where these anniversary figures stand in regard to the new sculpts or vintage line...I think the answer is obvious. These are meant to represent our favorite toys from our youth. They are built from a desire for nostalgia, and a strong tie to the characters and mythos that we've loved for twenty-five years. Hasbro has no intention of producing a toy that will replace our wonderful vintage sculpts, but they have provided a very fitting tribute to the characters behind those sculpts. Tributes that will hopefully appeal to more than just us hardcore fans. Will these Anniversary figures blend seamlessly with the toys we already own? No, honestly they will not. The scale on these figures is a touch bigger (though I think in any sort of action oriented display, the difference will not be noticable) and the detail on them is quite different. However you decide to display, pose, or play with these figures, though, I do think they are an excellent homage to the spirit of A Real American Hero, and I think most fans will find a high level of enjoyment in that fact. Vintage purists may be put off a bit (which is understandable) but I do think these toys have certain elements that can appeal to collectors of all makes and models, which is what will eventually get the Joe line back into the mainstream and at that point, it becomes much more possible that we will get a lot of what we want.

My own personal opinion? I really enjoy these figures, from what I've seen so far. Certain things have room for improvement (like the hip articulation on a few of the figures) but there is a solid, strong foundation here, with lots of room to grow and potential for greatness. The most important thing is that these are obviously being produced by a team of individuals with a strong connection to the past, a very high level of knowledge about the brand's history, and with a powerful grip on what collectors want to see in their toyline. To me, the concept alone shows a HUGE step in the right direction for G.I. Joe in the 3 3/4" scale, and I couldn't be more excited to see what's on the horizon. Yo Joe! 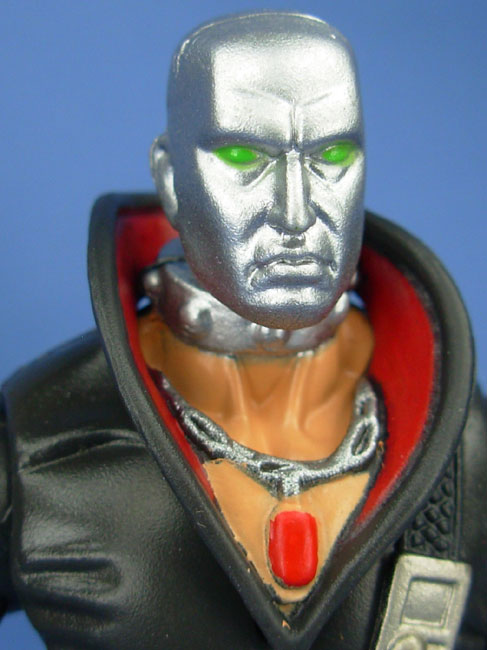 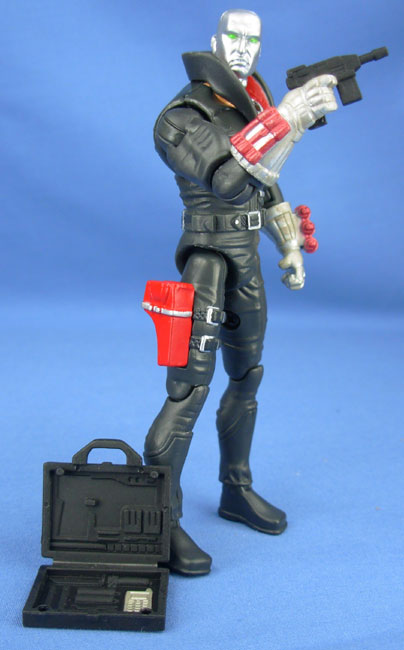 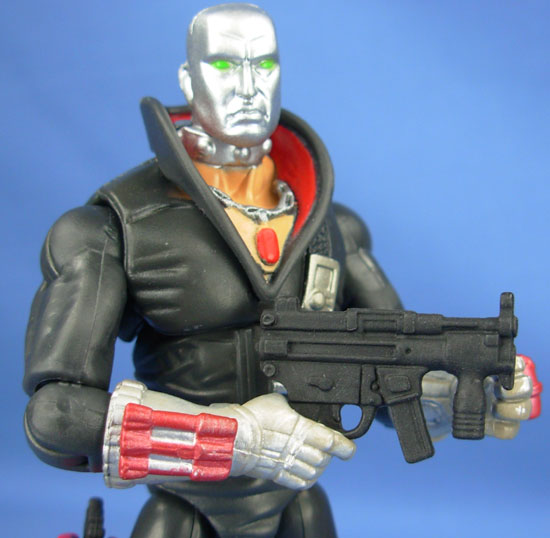 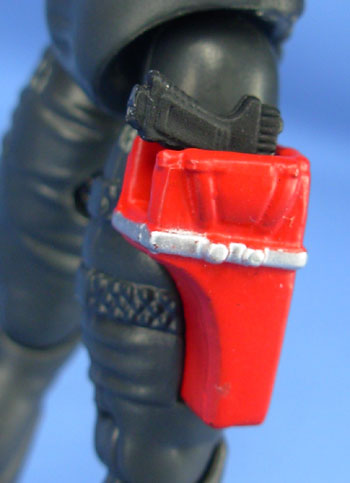 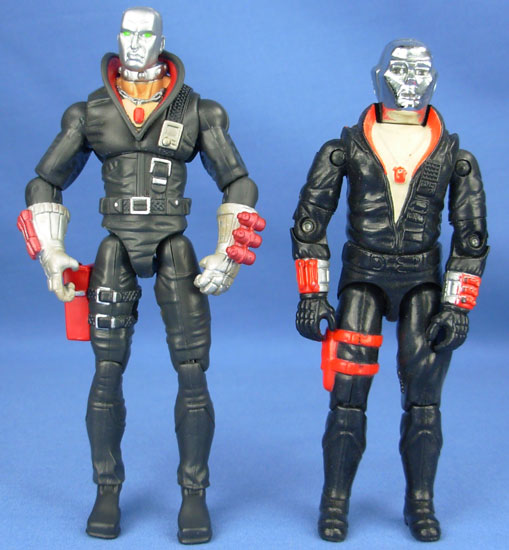 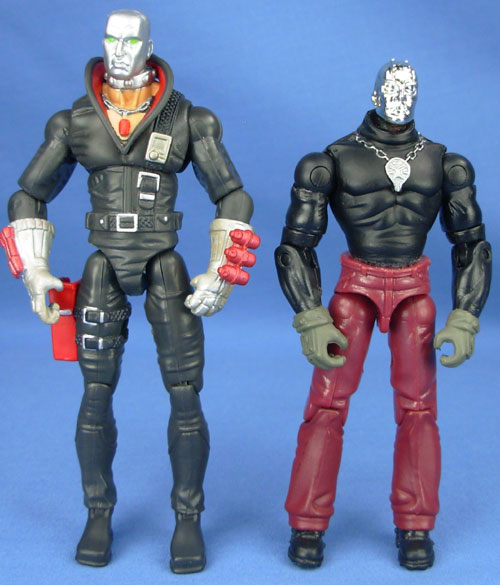 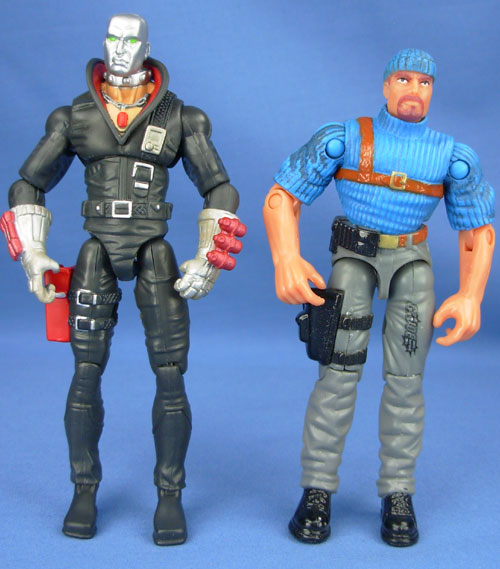 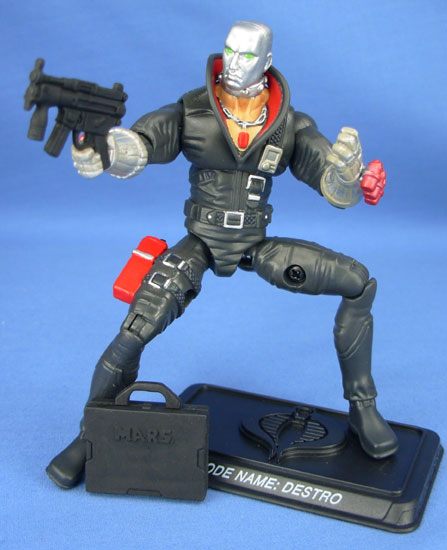 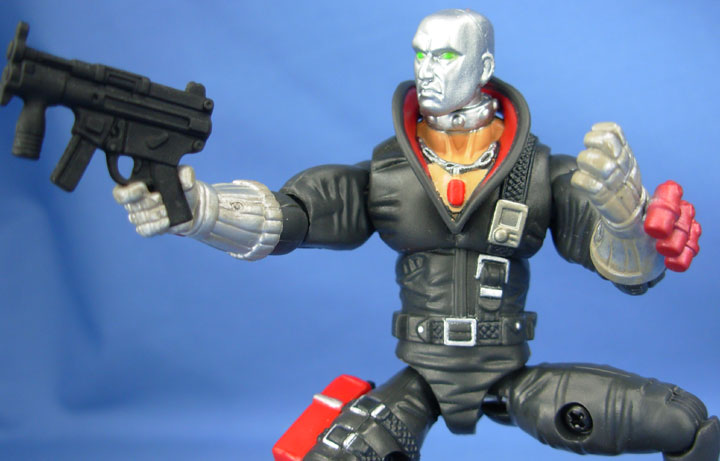 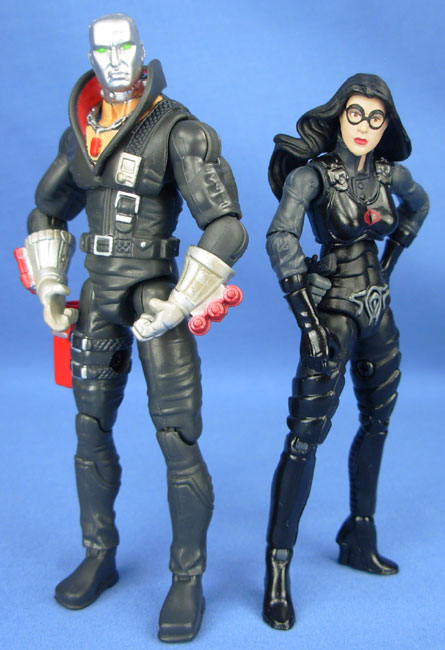 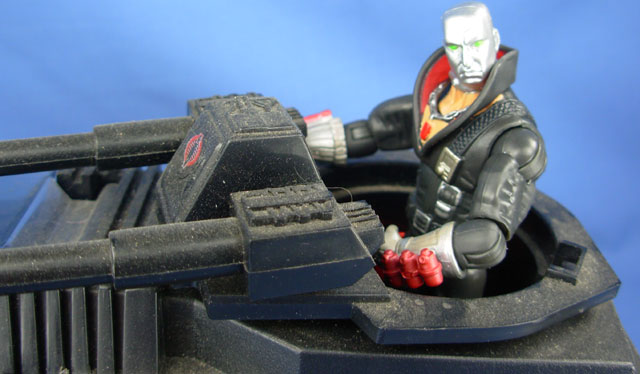