Originally simply called "COBRA: The Enemy" these nameless, faceless terrorist entities were the backbone of the COBRA forces. Cannon fodder, infiltrators and weapons specialists, they lived only to do COBRA Commander's bidding. As the years wore on, they sort of faded into obscurity as every COBRA trooper had a specialty, and the Infantry quickly became the COBRA Vipers. Still, these familiar "blueshirts" have a strong fan following and have some character all their own, and I'm happy to see them getting some 25th Anniversary treatment. 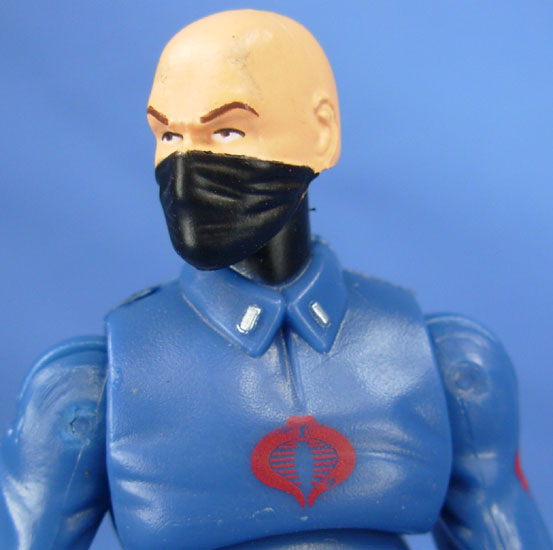 The first thing I had to do once I got my hands on the Trooper was to take off his helmet and see what was cooking underneath...as with the COBRA Officer, the Trooper is stark bald under the helmet, which leaves his head at somewhat of an odd shape. While some hair would have been nice, I don't mind the chrome dome too much, as my Trooper will be wearing his helmet most of the time. The detailing on his mask is nice and the helmet stays on his head perfectly, so while hair would be cool, this formula works to near perfection, so I wouldn't want them to mess with it too much. 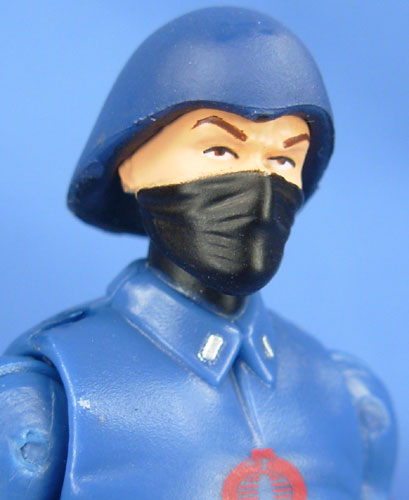 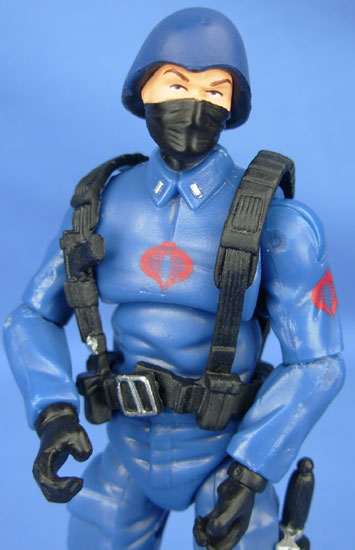 COBRA ends up with some mixed results as we look at the rest of his tooling, however. First of all, the mid-torso joint, while being terrific in the articulation department, also has an affect on the aesthetics of the figure overall. He has a somewhat unnatural "break" to his torso. Thankfully in most cases, the webgear or straps conceal this pretty well, and that is also the case here with the Trooper. However, his webgear is somewhat sparse, so that leaves some empty real estate between the neck and the waist, which in turn reveals a bit of that torso joint. Joe collectors have never been ones to sacrifice articulation for looks, though, so ultimately I really like how the torso joint works, even if it makes the Trooper look a bit funky without his gear on.

The Trooper is given swivel wrists, which is a very important new articulation point and one that allows for lots of new range of motion. His gloves are nicely detailed and mesh excellently with the patterned, somewhat baggy sleeves. As with many other Anniversary figures, the Trooper has a somewhat new style of elbow joint which does seem to limit a bit of the motion, but it's nothing critical. It ends up being very similar to the later Valor Vs. Venom figures, which means the arm can't quite get the 90 degree angle, but it still moves and poses relatively well.

One minor complaint I have in regards to the empty space on the torso as well is that the COBRA sigil is too small. If they enlarged it a bit...perhaps even doubled it in size, I think it would be great and might draw some attention away from the mid-joint. As it is, though, the small size of the symbol almost gets lost and doesn't quite have the impact that it could. Perhaps if we see more of these figures in later releases we might get a symbol that is a bit larger and more threatening.

The legs provide a lot of great added detail to the figure as well, immediately resembling a more military COBRA than we got back in the day. Baggy pants with pronounced pouches, elaborate kneepads, and well detailed combat boots all serve to give you a COBRA Trooper that is well equipped for field combat, not just for sneaking around and blowing stuff up. His hook-style sheath on his right leg accomodates his knife perfectly and rounds off the lower half of the figure well.

Unfortunately the Trooper suffers from the same articulation related shortcomings as many of his cohorts in this first assortment. He has a somewhat "V-style" hip joint, which again limits to front-to-back motion of his legs. For a figure that should be spending lots of time in the field, this is somewhat of a drawback. Granted, I sat down with a hobby knife for about 5 minutes and was able to fix this issue quite easily...still, it would be nice if it was this way straight out of the box. I'm happy to report that even if there are limitations in the hip-joint, the double knee joint is alive and works VERY well with the Trooper. He can bend quite far, and the joint is solid, sturdy, and quite durable. 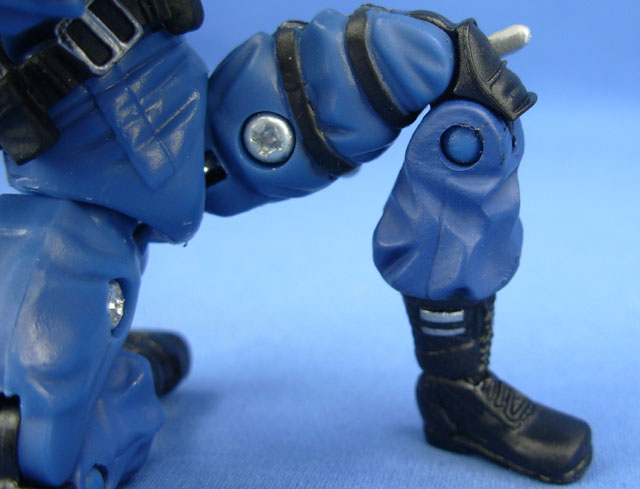 The rifle is a touch on the small size, and is somewhat rubbery material, which is unfortunate, but it's not as terrible as many accessories I've seen. The type of weapon it is allows for some nice poses from the figure, and once fully equipped, the COBRA Trooper is a force to be reckoned with. I continue to wonder why the Troopers come with a sniper rifle and would love to see some Troopers in the future with some more standard frontline weaponry. At this point, though, the gun choice is accurate to the original, and for the most part I dig the accessories. The knife is a bit too bulky and round for my tastes, but fits the sheath well, and it's a minor point all told. 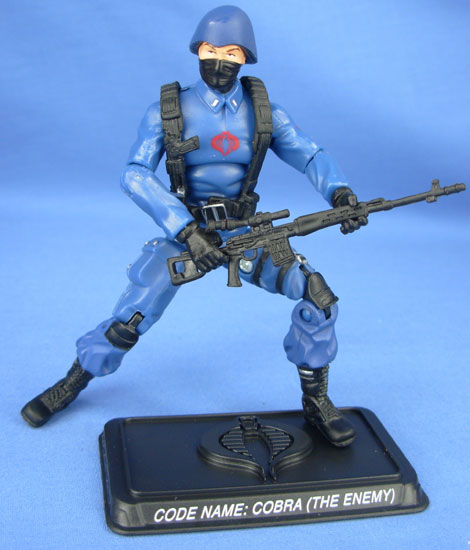 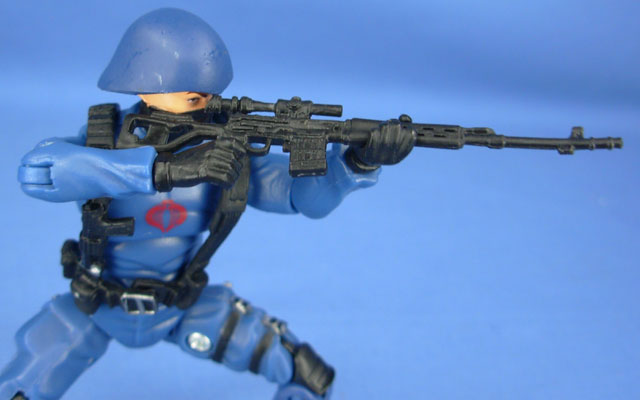 With some of the same downsides as the Officer and COBRA Commander, the Trooper isn't the perfect replacement for your standard blueshirts, but I don't think he's meant to be. He is a very nice tribute to the COBRA grunts who did the dirty work back then and with some slight adjustments to his hip sockets, this can be a very fun figure to pose and display. Even without the modified joints, he can achieve many different poses (in fact, none of the pictures here are with the modified joints...he can achieve all poses pictured in this review straight out of the box). With his increased upper body and arm articulation, though, there are poses he can get into that not even the vintage Joes can.

As a figure line to replace the vintage stuff? No way. As a fitting tribute to the spirit of the Real American Hero mythos? Absolutely. Great detail, decent articlation, and fun accessories all add up to a nice addition to the 25th Anniversary line up. 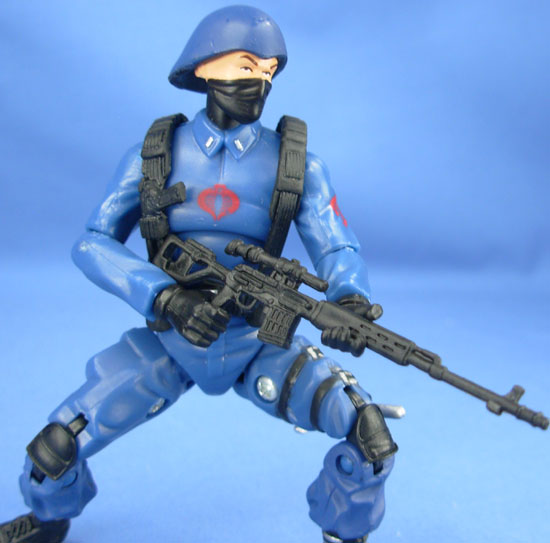 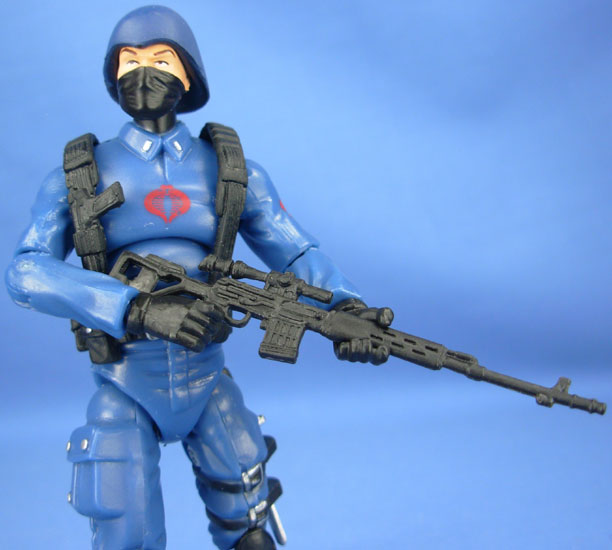 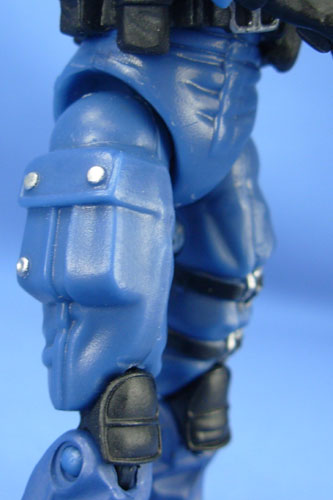 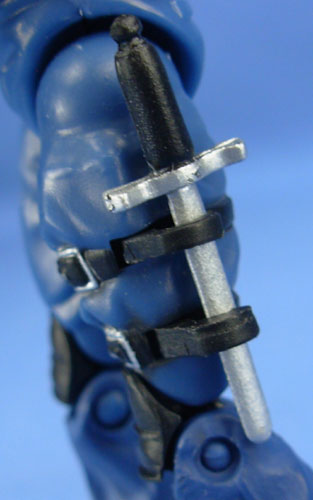 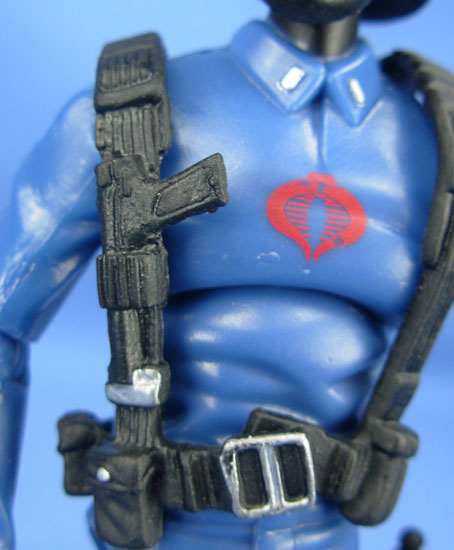 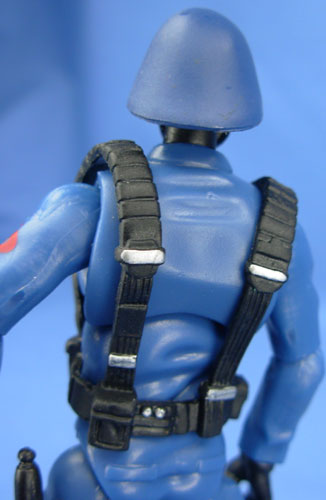 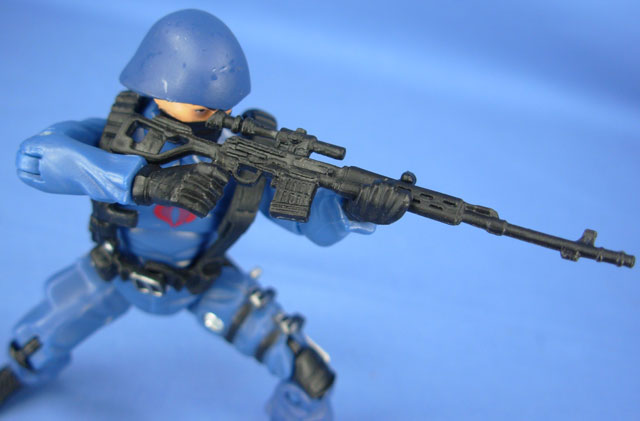 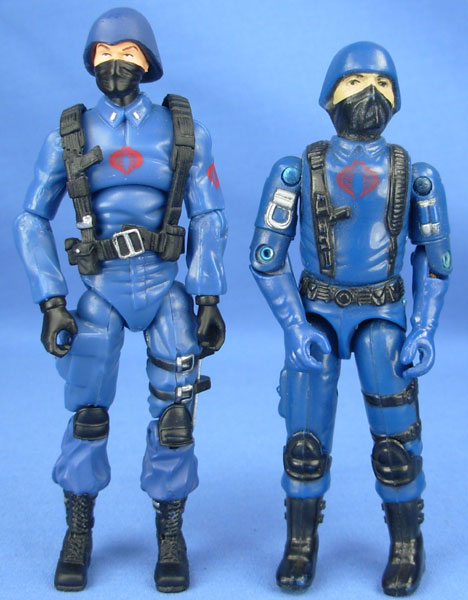 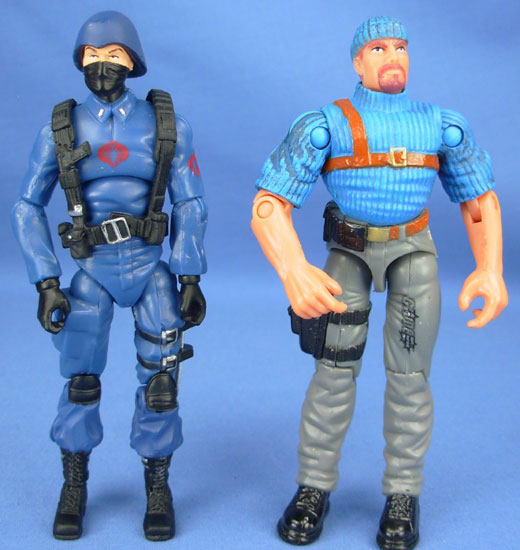 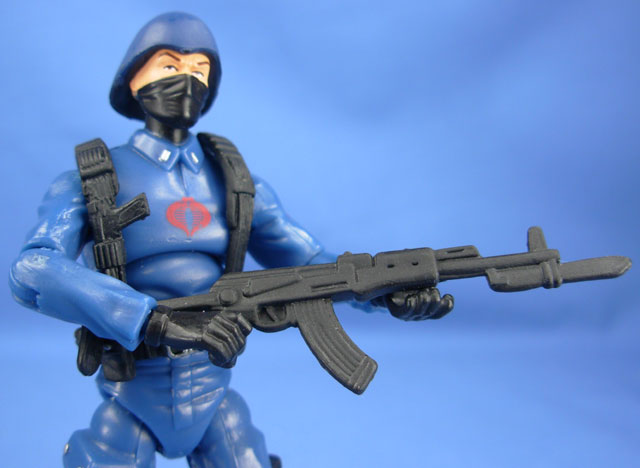