You'd be hard pressed to find a single guy in his 30's who doesn't instantly know who COBRA Commander is merely by looking at him or even hearing his trademark cartoon voice. Whether you're a fan of the evil, menacing, conniving COBRA Commander from the comics, or the bumbling, near-incompetant "retreat" uttering Commander from the cartoon, you cannot argue that he is COBRA, and getting him right in the 25th Anniversary line is extremely important. Well, Hasbro did good, and got him pretty right. Not perfect, but pretty good, anyway. 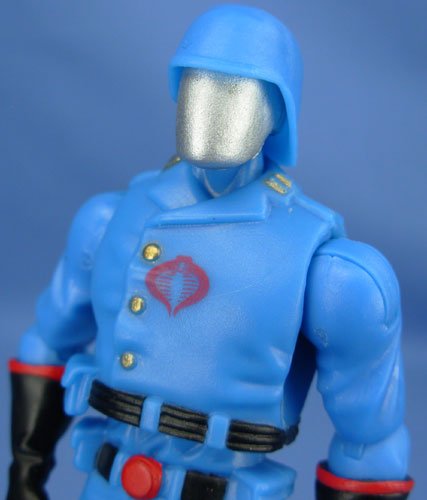 The first thing you might notice is that COBRA Commander's head sculpt is quite small, which is too bad. It's not deal-breaking, but yeah, his head is small. Regardless of that, though, Hasbro was able to really add some new dimension to the figure by giving him a removable helmet, and actually detailing some of his trademark explosives within the mask! A very cool touch indeed. Thankfully the helmet stays on quite firmly, too, so no worries about it popping off in the middle of battle. 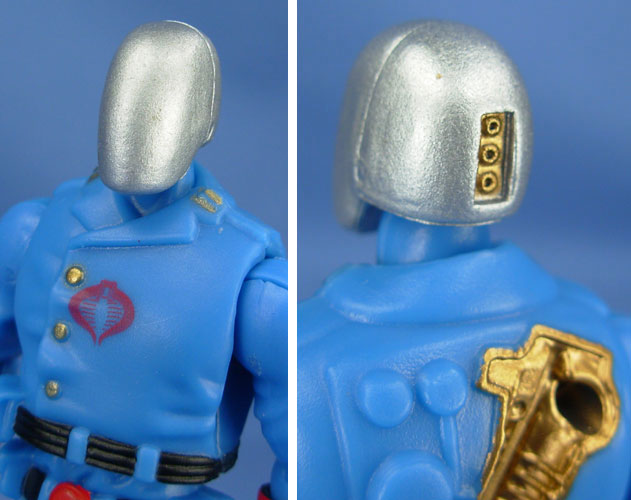 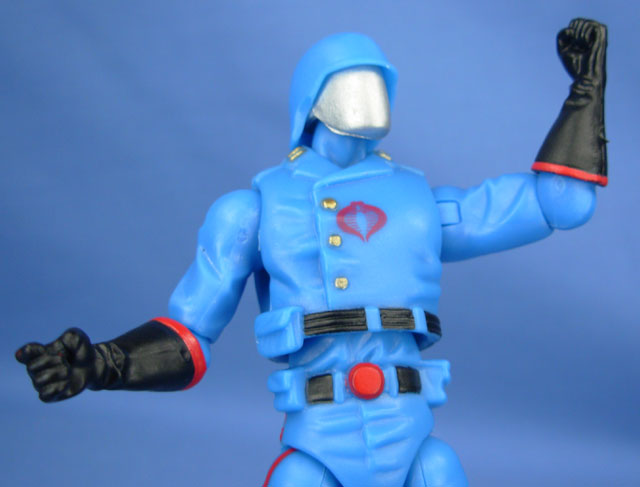 Beyond the head sculpt and helmet, COBRA Commander looks very, very nice. He's got that familiar "dictator-type" jacket and pants, the uniform that really identified him back in the old days (before he wore battle armor, red faceplates, or a Star Brigade outfit) and they reproduce it here in pretty exacting detail. The clips on the collar, the trio of small gold buttons, even the textured belt and simple red circle belt buckle are all very familiar trademarks and look excellent.

Where Hasbro really made a great decision here, though, was with the mid-torso joint. I don't think anyone can argue that if COBRA Commander was given a true mid-torso joint, it would have looked...well...horrible. Hasbro managed to work the joint in between his two belts just above the waist, and he still maintains every bit of articulation, even with the joint placed in a much more aesthetically pleasing location. It's a small thing, but it does wonders for his overall appearance. Rounding off the upper body tooling, the Commander also has elbow-length black gloves, which really harken back to the cartoon and comic, since he always had long sleeves and short gloves in the figure form. Speaking of gloves, I have heard some concerns and complaints regarding his closed fist on his left hand. Really, I thought I might be bothered as well, but when posing him I find the fisted hand a lot more fun to use as a dramatic posing mechanism than being concerned about it taking away from the functionality of the figure. It really does add a nice dynamic to the way you can pose the Commander, and I didn't end up getting as bothered by it as I thought I might.

The colors used throughout this version of the Commander are spot on as well, from the light blues to the blacks, right to the red trim. It all looks nice and vibrant and almost "animated". Great work from a paint standpoint, though I do kind of wish the COBRA logo was quite a bit bigger. A somewhat minor point there, though. 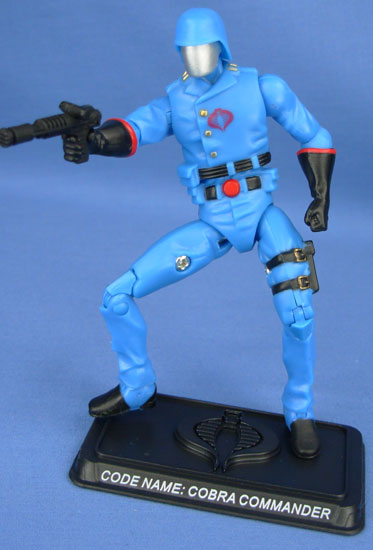 The rest of the figure continues the excellent sculpting and media-accurate representation of COBRA Commander, from the pants going just over the boots (and the blue straps underneath) all the way to the red stripe going up both outer legs. All of these touches work about as good as you can expect. Again, the one limitation here is the hip-socket articulation. Like the COBRA Trooper and COBRA Officer, the Commander is somewhat limited with his front-to-back movement of his hips. It's a bit better here than in the case of Scarlett and Baroness, but still it limits him enough that there are some poses he cannot achieve. When the figure looks this great and is this close to being fantastic, a major thing like that can drop some points away.

From an aesthetic standpoint, though, I can honestly say I've never seen a COBRA Commander figure more cartoon and comic book accurate than this one is.

His double-jointed knees are also extremely durable and well designed, giving him an extra edge in the knee-articulation, even though he's got some troubles in the hip joints. I was pretty concerned about how well these joints would work and am quite pleased to see that they are terrific. Great range of motion, not at all flimsy...excellent. 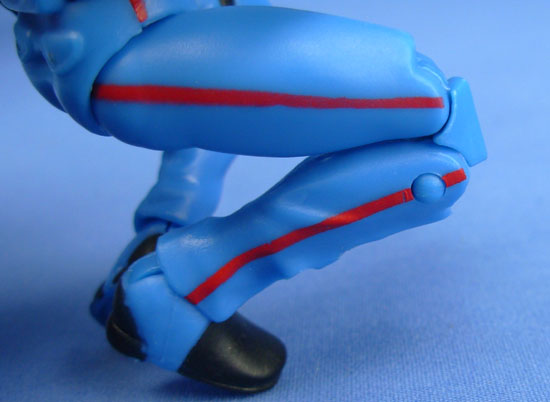 COBRA Commander comes with the bare minimum of accessories, which is really fine, because he's not really a "gear" kind of guy. He lets his underlings do the fighting for him.

His familiar Venom pistol is the obvious inclusion, and again is nicely reminiscent of his classic weapon. It even fits into the socket on his back like it did back in "the day" as well! 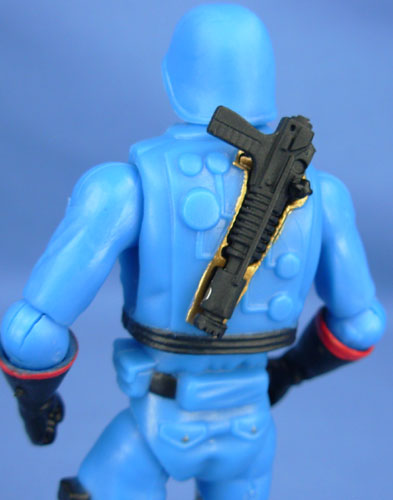 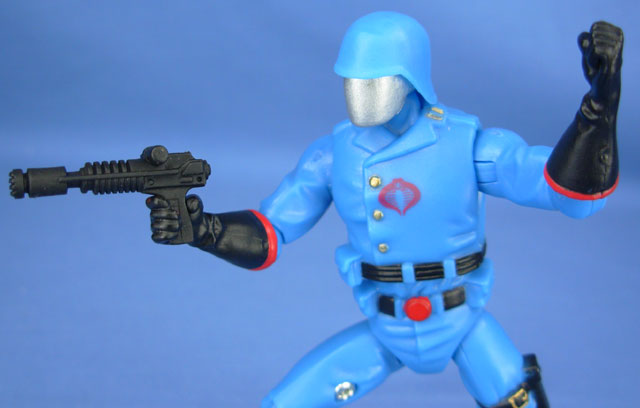 His legs are a touch too long, his head is a bit too small, and he's got a permenantly closed left fist, but from a display and aesthetic standpoint, this COBRA Commander is pretty darn cool. He'll look great leading your COBRA armies, and looks imposing in pretty much any pose you can get him into. Hasbro did a pretty great job on this figure (and his Hooded version as well) and this is pretty much the essence of what makes the Anniversary figures cool. 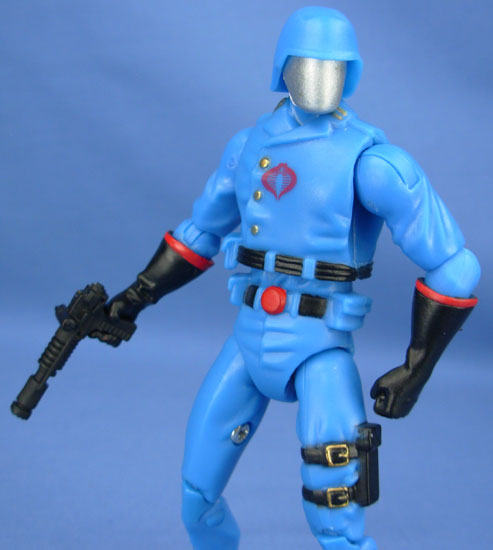 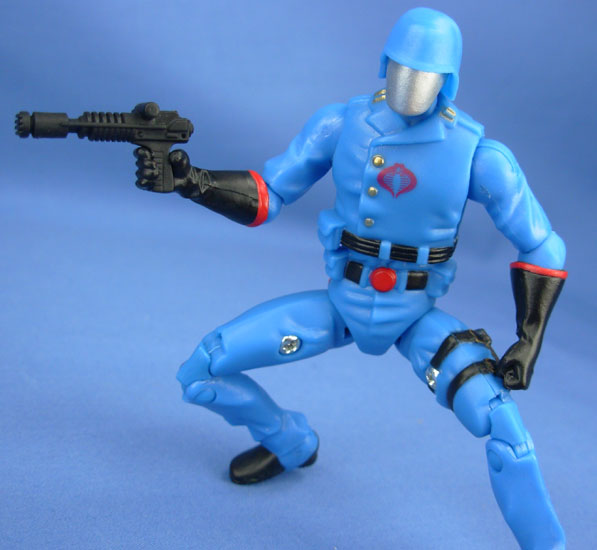 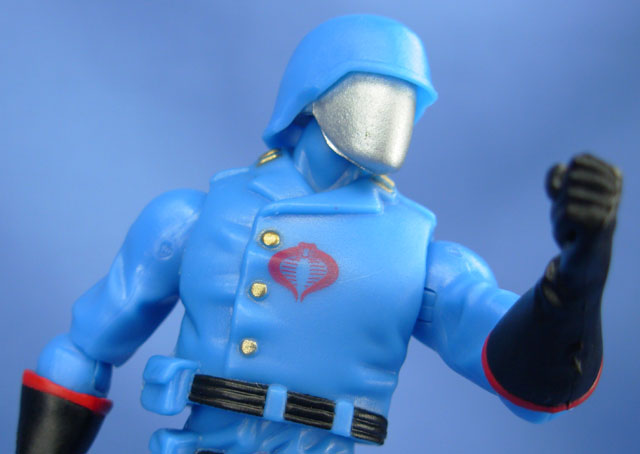 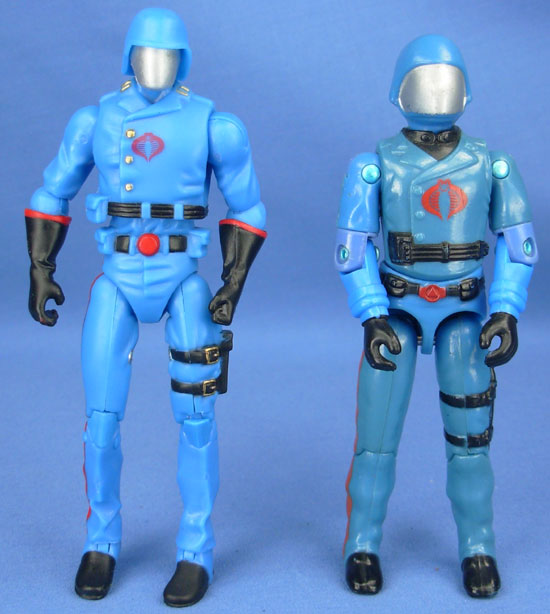 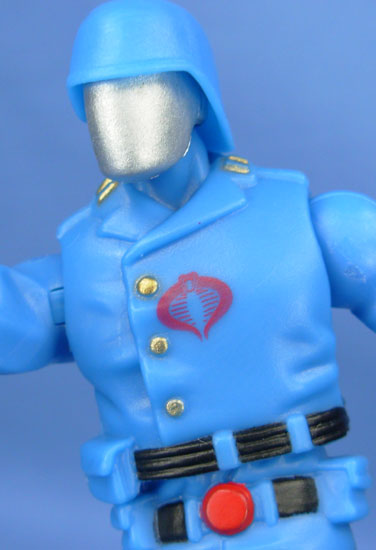 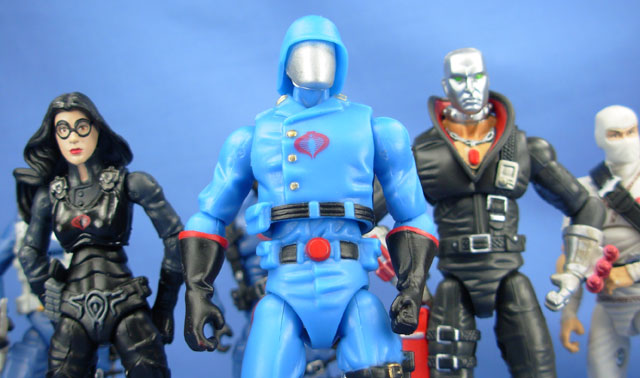 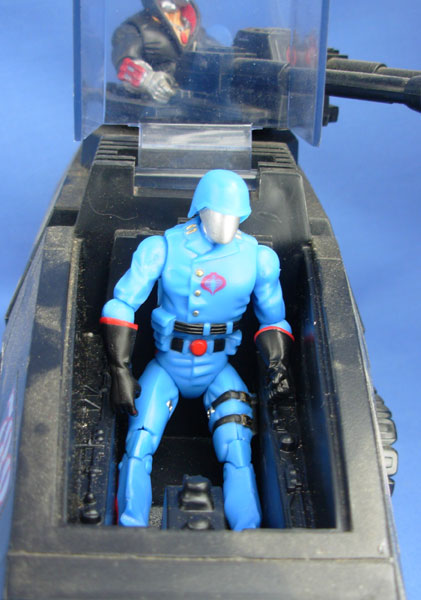