It's amazing to me that even though we got so few female figures in the Joe line over it's rich twelve year history, that the few females we did get have such a strong personality and strong following. To this day some of the most popular G.I. Joe and COBRA characters are the females, and the fact that woman figures make up 3 out of the first twenty slots of "iconic" characters is proof of their place in the G.I. Joe mythos. The Baroness, as the "first lady" of COBRA has been going strong for all twenty-five of the years that A Real American Hero lore has been in existence, and while her allegiances have sometimes changed, she appears here as she first did in 1984 (in toy form, anyway). 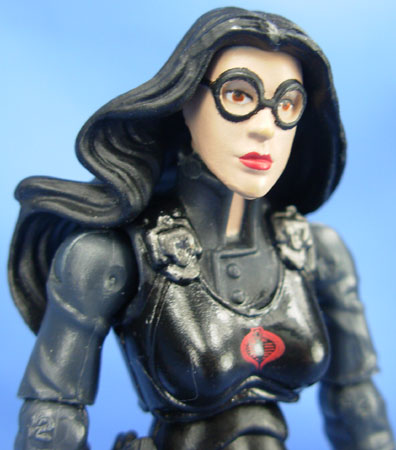 From a sculpting standpoint, I have to say with some regret, that from the neck up, Baroness leaves me with some mixed feelings. Her windswept hair is very accurate to the cardart and lends the figure it some very dramatic poses, but ultimately if she's just standing still, it looks a tad out of place. Not a huge deal, just a little thing. Personally, I think the sculpting on the hair looks great, just unsure about it's functionality. From the standpoint of sculpting on the head itself, Baroness and Scarlett seem to both have an issue with being somewhat "overanimated". I'm not sure if it's a desire to make the faces slimmer and "softer" but the end result is a sort of cartoony look. Again, not a big deal, but just a very minor nitpick. I've heard some complaints about the glasses, but truthfully, I think they look fine, and I can only imagine just how tough it is to accurately sculpt and tool glasses on a face of that size. Taking that into consideration, I think she looks good.

From the side both figures also have a very distinct angular profile which some folks do not like, though it doesn't bother me much personally.

Beyond the head and hair sculpting, the Baroness looks remarkably nice sculpted in this new style. 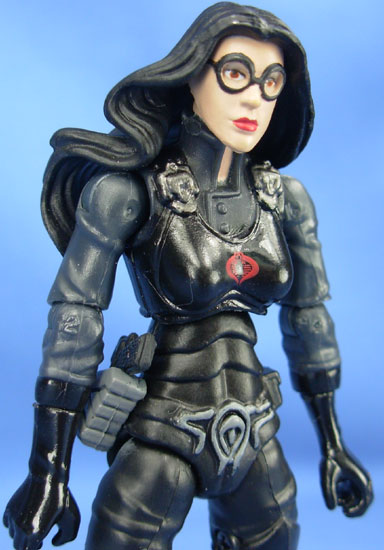 She has a slender overall frame, but there is a wealth of detail sculpted into her layered body armor and even into the uniform she wears beneath it. The slightly wrinkled cloth, the tall collar at the neck, the long gloves and buttons all add a sense of depth to her uniform, and you can really tell that she's got this armor plating over a regular suit underneath. The buckles and polished look to her protective armor are all very nice touches, and he has the familiar ridged pattern throughout the plates that protect her.

At her right hip is a very cool little gray holster that holds a small pistol, which is unfortunately not removable, but it's a very cool little element of the figure, I must say. Ultimately, from a detail standpoint, Baroness looks pretty nice, with some elaborate sculpting and well conceived updates to her design. 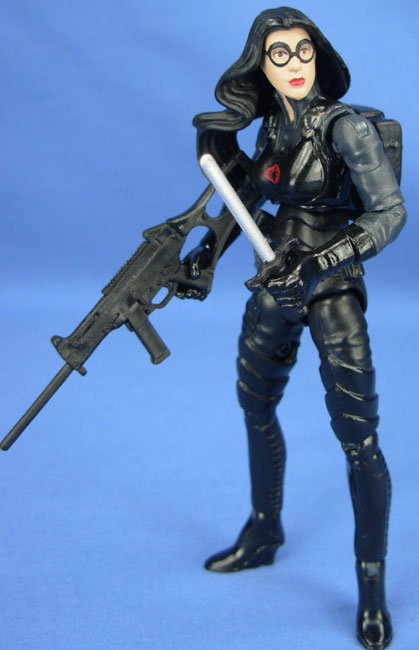 Structurally, however, I do have a few issues. Because of her slender frame, the figure feels quite a bit more fragile than the others, especially at the joints. While I haven't had any breakage at all yet, it almost seems like she could warp or break at any moment, and I feel like I have to be abnormally careful with the figure as I pose her. The combination of softer plastic and slimmer limbs combines to give you a figure that just doesn't feel quite as "tough" as her counterparts, though that could just be my own misconceptions. Her joints move fine, and she's got great range of motion from her waist and up, so no complaints there.

However, like Scarlett, from the hips down, she has almost no front-to-back movement of her legs at all. For what I can only imagine are aesthetic reasons, they sculpted her lower torso to barely retain any hip sockets really, so even though she has ball joints there, they can really only move side-to-side. I fully plan on doing some alterations to Baroness (as I did to Scarlett) but for now she remains a bit less poseable than I'd like. Her knees and ankles are all nice and flexible, and truthfully, she can still maintain a nice variety of standing poses, but that one limitation in the hip joints does detract a bit from what could have been an even better figure. 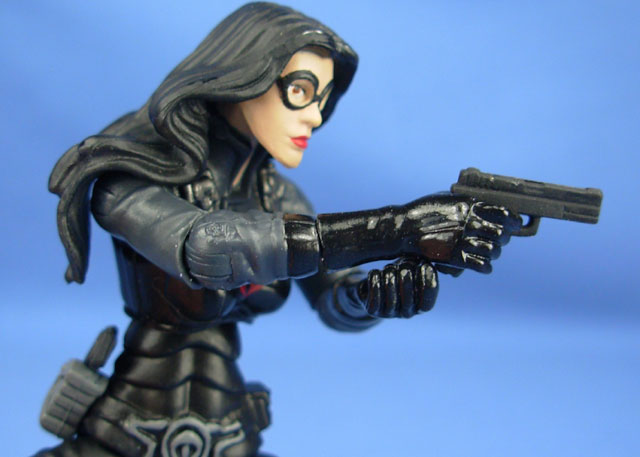 Accessories, as always, are a vital part of what makes a G.I. Joe figure cool, and Baroness does come with some neat ones.

The machine gun was originally made for Bombstrike in the Valor Vs. Venom line, but translates to Baroness very well, and it's a great weapon to boot, so it gets full props from me on that, regardless of the fact that it's been utilized before. Her knife is okay (and it's the same knife that comes with the COBRA Trooper and Officer) although she doesn't appear to have a place to put it, so I'm not sure why it got included. Interestingly, Baroness also comes with a newly sculpted backpack. Somewhat reminiscent of her older COBRA-themed backpack, Baroness sports a new look here, which plugs into her back using a smaller octagon-shaped hole that does not appear to be compatible with the existing backpack format. This backpack is obviously also part of the reason why Baroness' hair is swept to the side as it is as well. 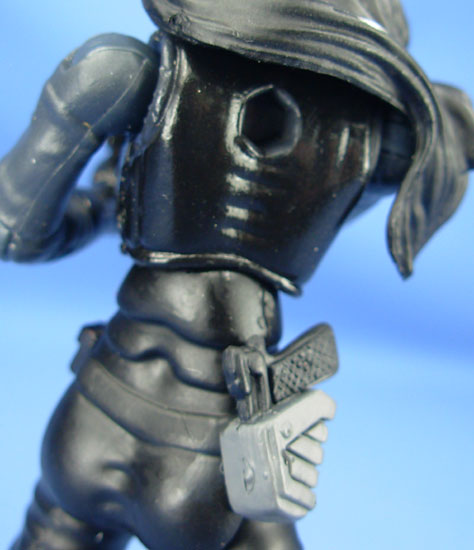 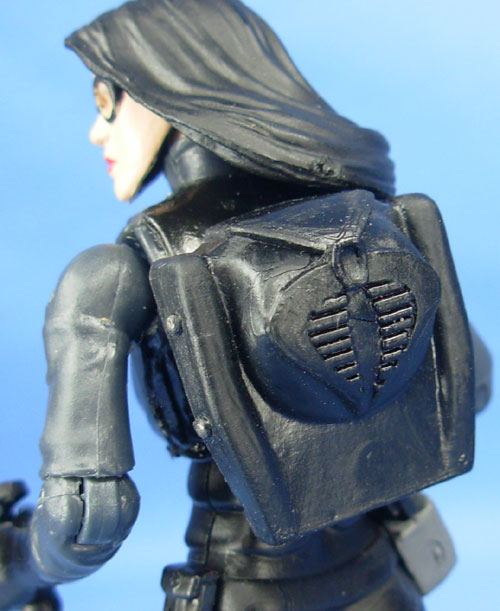 From top to bottom there are elements of Baroness that I really like and some elements that I'm not quite sold on yet. Her articulation has some limitations, but the overall design of the figure is a nice tribute to the classic look of the Baroness, and she blends with Destro very nicely. The dramatic sculpting incorporated into this Anniversary line has some pluses and minuses, but for an interesting display piece, Baroness works well and helps round off your COBRA hierarchy. When it comes down to shooting dio-stories or "playtime" though, the limits in movement do take some points away, though. She can hold some great gun-firing poses like Scarlett could, which is great, but there are certain things I like the figures to be able to do, and some of these poses just can't be done. For a toyline that is so dependent on figures that move as naturally as humans do, I hope this is something that gets looked at and potentially improved down the line, as this could make what is a pretty darn good new series of toys into something really, really special. 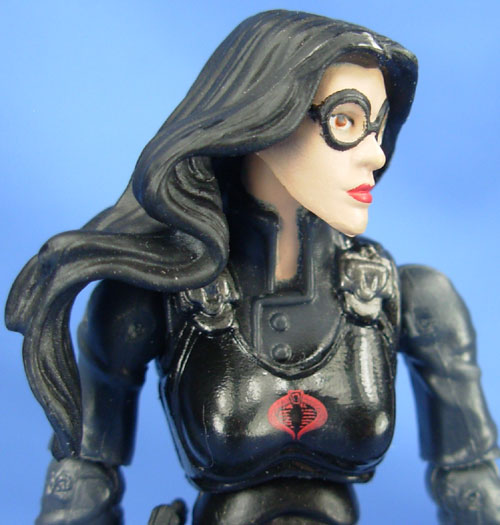 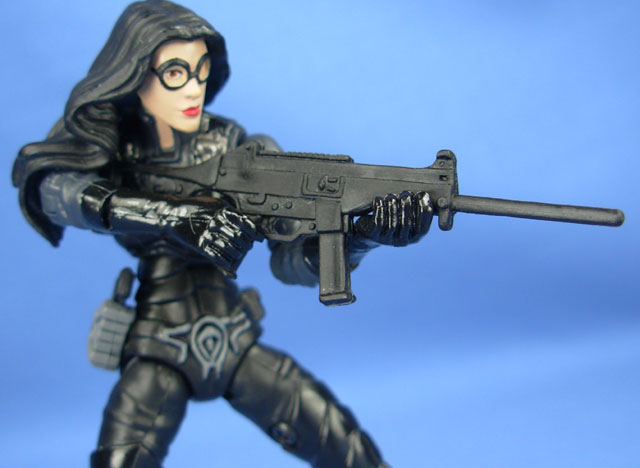 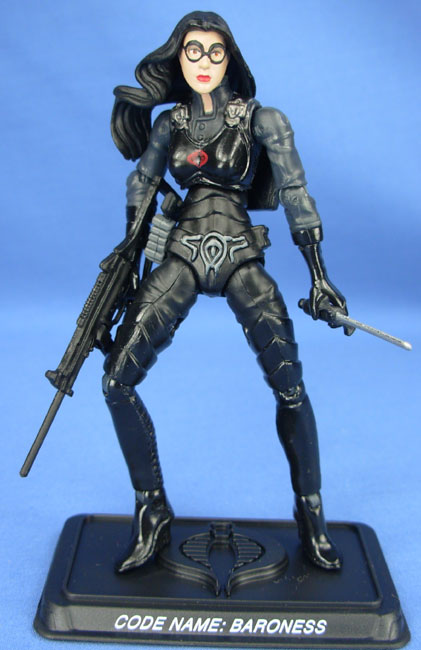 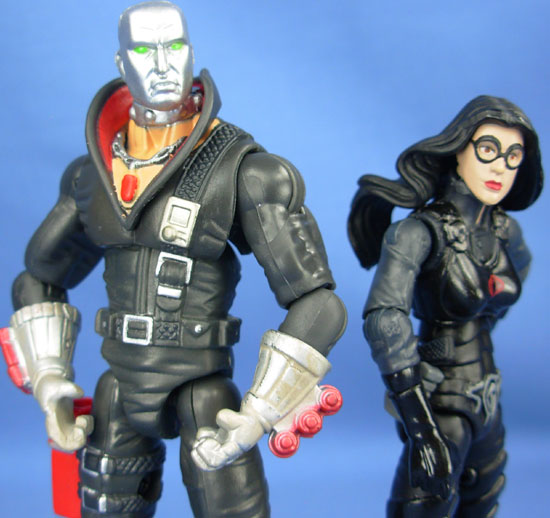 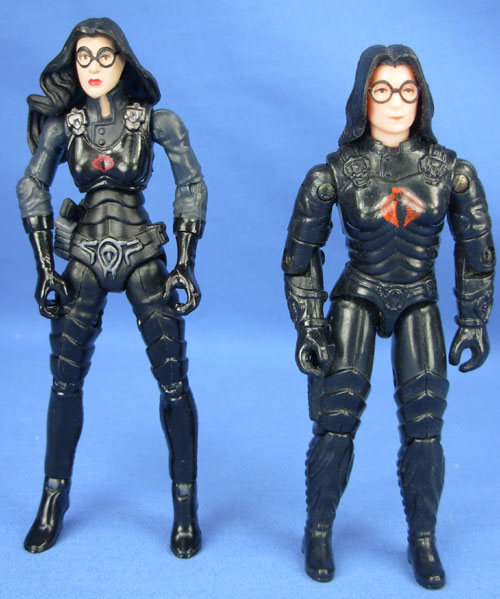