Like the HISS IV we first saw this prototype quite a while ago (just before Toy Fair in February, if I recall...) and to be honest, I didn't know what the heck to make of this thing. Cast in all tan, it just looked like a bunch of wheels and guns and I was certain that this would end up as a forgettable vehicle.

However, it would just happen to occur that the Sand Razor ended up being the exact polar opposite of the Cobra HISS IV. While I greatly looked forward to the Cobra vehicle and was more than a little disappointed, I was dreading the release of this vehicle and ended up very pleasently surprised!

I had even heard reviews from within the Joe community pretty much saying that this thing was just so much wasted plastic, that I had relegated it as being such. I figured I would pick it up for posterity and promptly forget about it...instead, I see myself using this thing quite a bit!

The vehicle is a little larger than it originally appeared to me, and has some GREAT huge tires with which to traverse many different types of terrain. These large tires just look really, REALLY cool to me and I think they had some nice touches to this vehicle. There is a single drivers seat with a steering wheel and gearshift, with sound attack slots scattered about allowing for some flexibility with weapon placement. The turret is huge and imposing (almost too big...it sometimes pops off of it's mount due to it's own weight!) as opposed to the HISS IV and can seat two Joes comfortably. There is a neat little slide out platform for an extra passenger and if you tilt the seat a rocket pod pops out on the other side. Add these already impressive weapons to the always cool gatling gun on the front of the buggy and this thing is ready to rock!

The Desert camo motif looks good on this thing as well, and this vehicle really looks like it thrives in sand dunes. I can see a whole squad of these things speeding over the rolling dunes, firing into the night and sending Desert Scorpions and Desert C.L.A.W.S. scattering!

But how about a breakdown?


Display: Like the HISS, I'm not wild about the open display here either. I do agree that it does display the actual toy better, which can be a good thing, but I really miss the prominant box art.


Assembly: N/A. Again, completely prebuilt w/ not even a sticker...


Playability: This vehicle would appear VERY playable to me! Those tires roll very well over lots of different terrain, and while the turret does pop off at the drop of a hat, it seems pretty cool to play with. It's very poseable and moves 360 degrees, and even has a trio of spring loaded missile launchers crammed in there. A very cool, playable toy!


Durability: A little iffy here. The vehicle itself seems quite tough for even the most rugged of play, but the turret does fly off at even the slightest bump. Granted, that's better than BREAKING off, but still, I could see this thing suffering some blows with just a couple well placed "wall crashes".


Colors: Cool colors! Nice desert color style, and some cool camo action. The touches of green are in all the right places and add, not take away, from the overall look. Nice paint apps, for certain!


So, basically, I was really looking forward to the HISS and was pretty disappointed by the result. The Sand Razor I was not looking forward to at all, and found an awesome vehicle that I think I will use very often. You can never tell with these Joe toys until you get them in your own hands, and I think that's part of the fun! 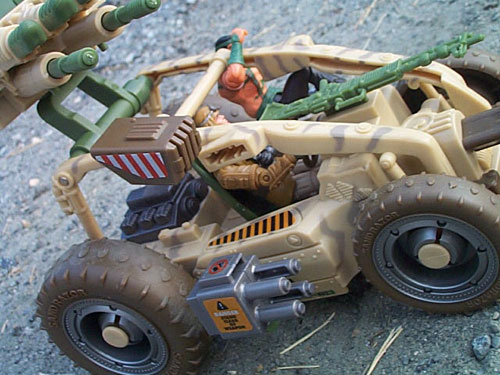 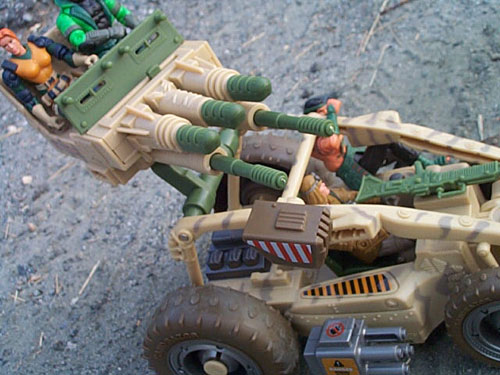 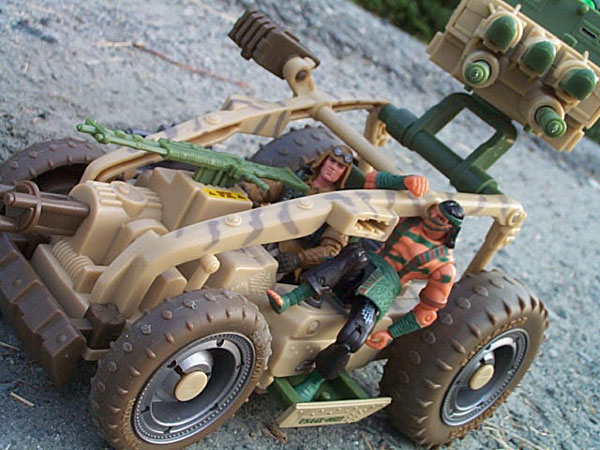