Even before the release of Wave 1, we saw preliminary prototype molds of what was then known as the Strike H.I.S.S., not in color and with few details able to be made out in the first few pictures. It had the familiar triangle tread and a cool snake motif and seemed like a pretty wild update to a Cobra Standard vehicle. I was immediately intrigued by the look of the thing and thought that it might be a neat way to update the classic Cobra HISS.

Between then and now, things changed a little bit. Now that I own the HISS, I have to say, it does not impress me much, to be honest. The color scheme is nice. A cool reddish tinge with some nice rattlesnake pattern camouflage bring everything together pretty nicely. I even really dig the snake-type canopy. It makes it very identifiable with the Cobra Team and makes the tank really look menacing. I like that a lot.

But that's unfortunately where the likes about end. The main armamant on this thing is non-existant. It does have a reasonably cool little gun turret, but it's not something that instills fear in the enemy. It leaves the gunner pretty open and leaves the vehicle without much in the way of defense. The "troop carrier" capabilities of this thing are fairly minimal. A single driver in the cockpit, a single gunner, and two troops in the back. Big deal...the original HISS held that many, while the HISS II (still by far the best version of this tank) held even more.

As for the attack feature, well, it's kind of neat the way the head swings up to strike, but doesn't make a whole lot of sense in the midst of battle. It completely blocks the top gunner and leaves the underside of the tank wide open for enemy fire. Plus, as a result of this play feature, it is impossible for my HISS IV to rest it's "head" in a locked down position. It stays down, but is very wobbly and is always crooked, and just doesn't look right. Overall, I was pretty excited about this vehicle, but am left somewhat let down by the final result. It had the potential to be very cool! If anyone can figure out how to customize this thing to swap the Sand Razor Turret with this one, and to lock down the front cockpit, I think I would really love this vehicle. As it is, it appears a little less than I was expecting.

But still, let's break things down a little:


Display: While the toy companies probably think that an open box encourages sales (and it just might...) I'm not crazy about this method of packaging. The box art is minimized and hard to see, and what could be a very cool, presentable box, becomes so much recycling fodder after attempting to open the thing. I'm glad that I'm not a box collector, or heaven forbid a MIB collector, or this might end my collecting right then and there! :)


Assembly: N/A. The thing was prebuilt, which is cool in some ways, but the kid in me always loved putting my Joe vehicles together...not even any stickers. :(


Playability: The thing does earn some higher marks here. As a kid, I can see them loving this. The striking head, the firing missiles and sound attack effects would all be pretty enticing to the younger generation. There are lots of opening doors and plenty of interactivity, so I have to say that there is some playability here.


Durability: This seems like it should get somewhat high marks, too, as the thing seems relatively strong. However, the turret mount already had white stressmarks when I bought it, and the striking head seems somewhat flimsy. In a household of...ambitious children, I could see this thing being a casualty fairly quickly. Perhaps in ten years there will be a score of rare headless HISS IV tanks on eBay... :)


Colors: More decent marks here. The different shades of red, brown, and black were all well used and nicely applied. The colors are appealing and "snakelike" and I think this thing could blend in pretty well. Very nice colors indeed.

To sum up, I really think my discouragement lies with expectations. I was expecting a very cool new vehicle, and got only a mediocre one. As such, I was slightly disappointed, which can lend to some hard criticism. This thing did have a lot of decent potential, but just seems to fall short in enough different categories to make this vehicle only semi-interesting. And to those fans of military realism...forget it! 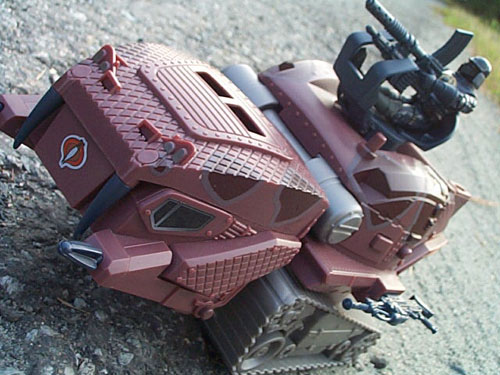 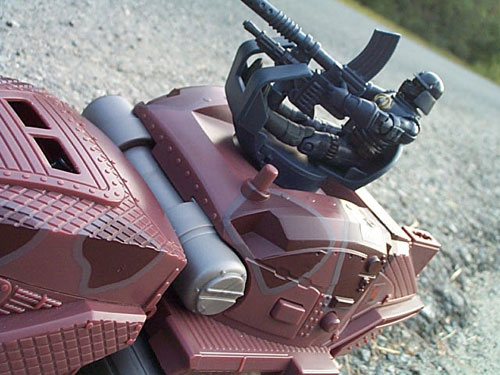 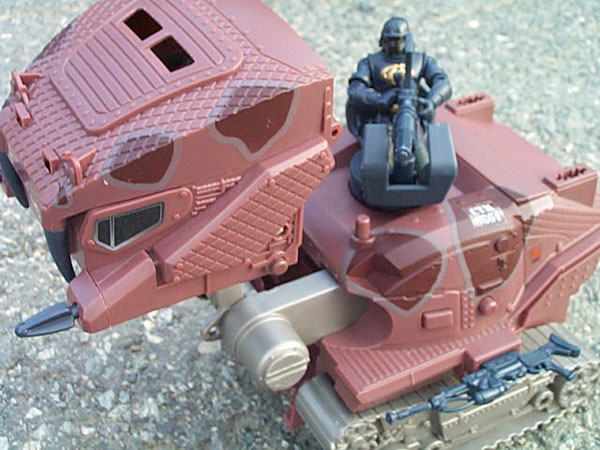 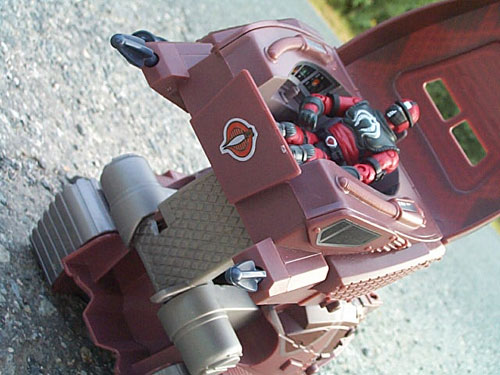 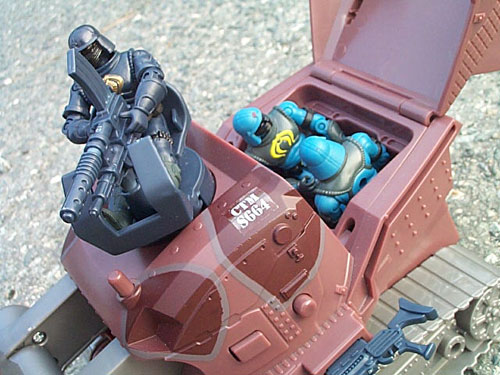