Let me start out this review with a statement of disbelief. After almost half a decade of stopping by my local K-Mart during my routine toy runs, always prepared to find NOTHING new, this fine afternoon, I was shocked! They had new Joe stuff! Who would have thought it?

At any rate, a few minutes and $19.98 later, I walked out with a brand new G.I. Joe Rockslide, and this vehicle, the Cobra Mantis. They are a pair of nice small vehicles, at decent enough price points, but just how do they weigh up?

While the Rockslide didn’t really blow me away, The Mantis is quite another matter. For a vehicle adapted from the Jonny Quest toyline, this Cobra sub fits in perfectly and really works as a Cobra vehicle!

The whole design scheme is fantastic, from the slim, almost reptilian shape, to the cool stabilizers and the great oversized propulsion unit in the back. It all adds up to a nice little Cobra Sub.

Display: It should go without saying that the boxart really draws your eyes to the box. Like every other new vehicle, it looks beautiful and should entice people to purchase.


Assembly: Nothing to mention here. A handful of small accessories to snap on here and there, but very quick and very painless. Within five minutes, it was all together and all stickers were on, and it was ready for action!!


Playability: The Mantis is a neat little vehicle to say the least! Being a sub unfortunately takes away some of the play value, but I’m toying with the idea of making it an all purpose vehicle. It has wheels for rolling on the bottom and almost has a flight pod look to it, so I’m hoping I might be able to get away with making this thing a water/air/land hybrid vehicle. That’s pretty much the only way it would get a lot of use in my universe, but I’m willing to stretch to include this nice little vehicle.

This thing also has some other great play features included. The little claw on the starboard side is pretty cool. Also, the fan in back has a windup feature which spins it around and acts like a real propulsion device. I have yet to stick it in some water and see if it really works, I may have to "playtest" it at some point!

Possibly one of the coolest features of this vehicle, though, was a simple little surprise. I opened to cockpit to see how Moray fit inside, and to my pleasant surprise it’s a two seater!! Yup, two Cobra underwater operatives can fit inside this streamlined little boat.


Durability: Like it’s brethren (and 90% of other Joe vehicles) this thing does seem designed for rugged play. It does have some somewhat flimsy attachments which could potentially be taken off by rough play, but overall the sub feels pretty nice and solid.


Colors: Another bonus to The Mantis. This thing has a COOL color scheme!! That sharp blue and red and silver paint job just screams Cobra. The blue meshes perfectly with the blue of the Moray pilot (as well as the ’00 Undertow, for that matter) and brings the Cobra underwater squad together nicely. The black attachments are nice compliments to the blue and overall, this is a superb looking little vehicle.


Unlike it’s compatriot, The Rockslide, I think the Mantis will become an integral part of my G.I. Joe world. If I can get away with using it in other environments I will, but if there’s a water adventure, you can bet this sweet little Cobra submarine will be in the thick of it! 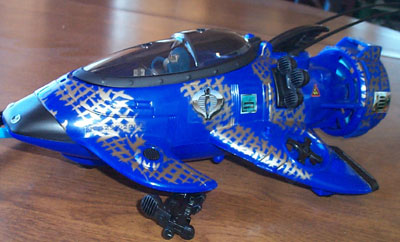 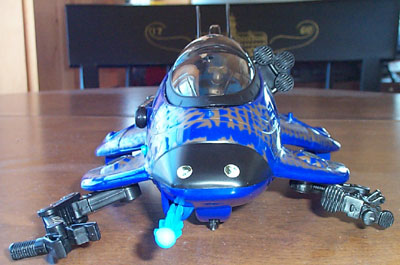 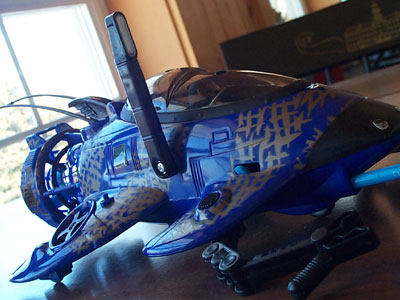 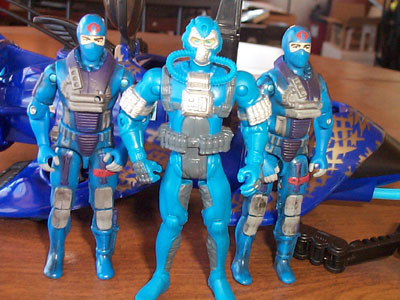 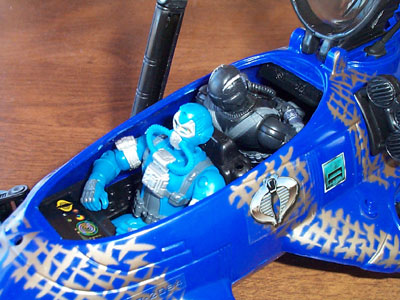 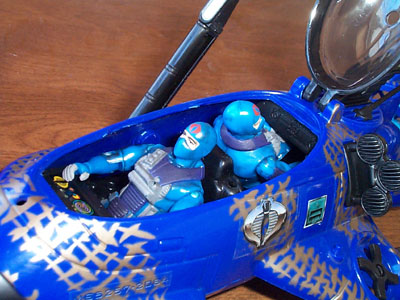