Let me start out this review with a statement of disbelief. After almost half a decade of stopping by my local K-Mart during my routine toy runs, always prepared to find NOTHING new, this fine afternoon, I was shocked! They had new Joe stuff! Who would have thought it?

At any rate, a few minutes and $19.98 later, I walked out with a brand new Mantis Cobra Sub, and this vehicle, the Rockslide. They are a pair of nice small vehicles, at decent enough price points, but just how do they weigh up?

The Rockslide…well, it’s a little iffy. I liked the Battle Bear as a kid, played with it constantly in a sandbox in my backyard. I think I’ve been through three of them, only having one remaining, and while it’s a nice enough little vehicle, it’s not one that sees much use in my Joe world. I fear the Rockslide might have the same fate. Granted, it’s not a bad vehicle by any means, it improves on the Battle Bear in certain areas, but I just don’t think I’ll use it a whole lot. Still, let’s cover all bases:


Display: Another superb display box from the design whizzes at Hasbro! This boxart, like all of the 2002 stuff is absolutely smoking. The black box with the logo and the tearing picture of the Rockslide on the front all comes together perfectly. Add to that, the kicking look of that Frostbite version (that unfortunately didn’t translate quite as swiftly into plastic) and the box is just plain cool. Nice job!


Assembly: Pretty much null and void…the only real assembly points were snapping on the launching assembly and putting on the missiles and stickers. A quick, painless task which gets the Rockslide out and rolling quickly. Bonus points for Hasbro here.


Playability: Well, it does have an element of playability. It slides well, and is small and light so it moves well. The strafing machine guns are still cool even after all these years. The massive launching system is cumbersome, but as a gatling gun, it adds some much needed assault capabilities to the snowmobile. I pretty much keep the missiles out, seeing as how they are obnoxiously colored blue and would pretty much smoke whoever is in the driver’s seat. Also, the CGI commercial used them as a gatling gun and used them well, so I became enamored of the idea. Two more arctic troops can fit on the back and the whole thing is generally a nice package.


Durability: The vehicle seems pretty tough as far as I can tell. The front skis were unfortunately tipped upward at an odd angle, and as I attempted to lower them, white stress marks immediately appeared. I halted and left the skis as they were, which kind of sucks, since they restrict the vehicle from sitting flush on a surface. Not a major complaint, but one nonetheless.


Colors: The colors are very nicely done on the Rockslide, and an improvement over the original Battle Bear. Rather than stick with the plain white, they added some very cool gray camouflage, which really shows off the vehicle well. It is separated nicely from it’s older brother in that regard. The launcher looks cool as well, being a nice, dark black, but the missiles are a little bright for my tastes. That’s really okay, though, since I don’t use them much anyway.


All in all, the Rockslide is a nice little vehicle, but nothing to write home about. Considering you could pretty much have bought the HISS III or the AWE Striker for the same price, I’m not sure it’s worth it. The figure inside draws that value down even more, taking a moderately neat version of Frostbite, and adding some unneeded brightness to him with patches of yellow. Really, this vehicle is okay, but next to something like the Night Rhino it kind of pales in comparison. 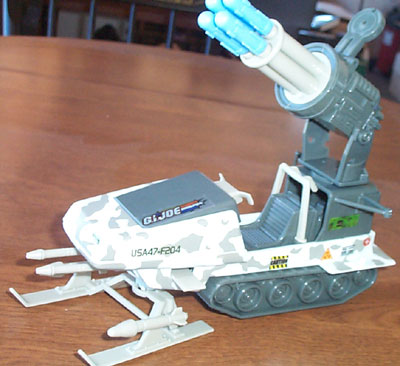 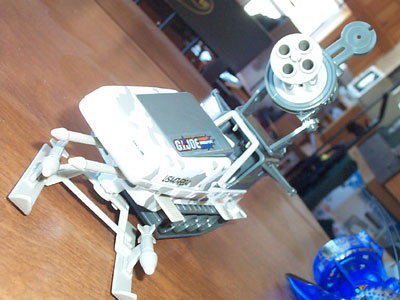 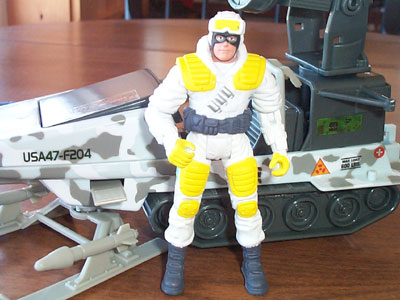 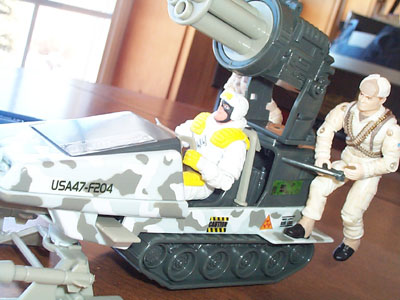