When I first saw the prototype of this vehicle at the now famous San Diego Comics Convention, where the 2002 stuff was first revealed, a smile immediately came to my face. I’ve always thought that both the figures and the vehicles from the early 90’s were greatly overlooked, and was happy to see one of the best, The Hammer, get it’s due.

Back in the day, The Hammer was the closest thing to a real Hummer that the Joe team got. It served its purpose well, being a transport and attack vehicle both, with plenty of accessories and even more weaponry. The Brawler takes this theory and expands it even more.

A few months later I think it was when I first saw colored pictures of The Brawler, and again, I smiled. The kickin green/gray camo scheme just plain blew me away! But, there was the fact of the rather large, obtrusive launcher stuck onto the roof where the machine gun used to be. It was a turn off at first, but I’ve grown to appreciate it as I do the rest of this fine vehicle. But, let’s break it down:

Display: Like The Dominator, The Brawler has an absolutely ROCKIN box. The art on the front is large and streamlined to look sharp and sweet. The colors are terrific and the art style just blows me away. Side by side with The Dominator, these two vehicles pretty much leap off of the shelves!


Assembly: While slightly more complicated than The Dominator, The Brawler still went together very quickly and easily. Everything snapped nicely, nothing broke or didn’t fit. Even the stickers seemed well thought out and well organized, and within minutes The Brawler was just how I wanted it.


Playability: This is another vehicle with some terrific play value. It is solid and tough, with TONS of extra weapons and things to fool with. Yes, the top rocket launcher is large and somewhat excessive, but I think it fits well with the rest of the package and in truth, I really think it works with the rest of the jeep. Hasbro was able to blend it well enough with the overall vehicle and really made it work. This thing is like a Hummer on steroids! You can shove it along the ground, kids can crash it into things, and the weapons are all fully functional…overall, a terrific addition to any G.I. Joe Army.


Durability: This ties in pretty closely with playability really…the whole frame is solid and all parts fit nicely. I have twisted and turned all cannons, with no fear of breakage, and even if this thing slammed into a brick wall, I think it would come out okay. All hinges move freely and easily (most even better than the original Hammer!) and all in all, this is a vehicle that can be comfortably played with, with no fear of harming it.


Colors: This is where this baby really shines! Yeah, the original Hammer was really nice, with all of the cool features this one has. But this new version…WOW. That camo and silver scheme really makes this thing stand out in a crowd, and yet seems functional as well. It would fit in well in an Urban Environment, and the colors are very nicely used.


All in all, this thing is nice. A great choice for an original vehicle mold, with some great colors and lots of play value. It’s unfortunate that the figure included was a 2002 style figure and such a minor repaint at that. That hurts the value a little bit, but over all, this thing is a great all purpose jeep. 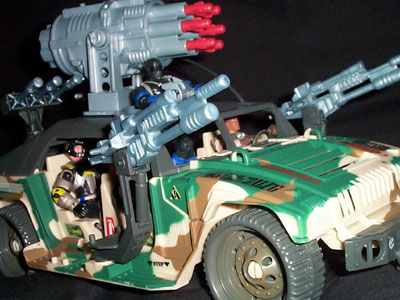 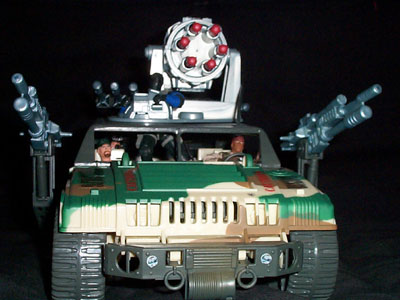 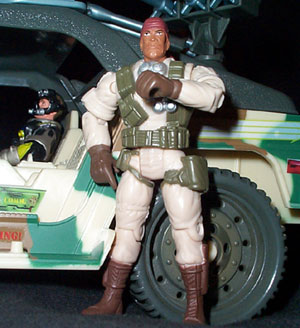