Even back as a kid, I was a huge Iron Grenadier fan. Destro was always super-cool to me and when he got his own legions to control, I thought that was great. Sure, some characters were a little strange, and the vehicles were WAY out there, but I still loved them.

And guess what? I still do.

I was quite excited when I saw that "Destro’s Dominator" was among the new vehicle releases coming this year from Hasbro. I hoped that it was the same as it’s old school namesake, and not a rename of a different vehicle. How happy I was when I finally saw some pictures and got my wish!

Now, the Dominator goes right in line with the other Iron Grenadier concepts. Completely removed from realism, and yet very cool as it stands. While my favorite IG vehicles will probably always be the Razorback, DEMON, and Despoiler, the Dominator fits well into Destro’s super-technological army, and I think fits right in with the new G.I. Joe VS. Cobra theme as well. Let’s see how it shapes up, though…


Display: A big deal on the toy shelves, and man oh man, does this vehicle have this in spades! I have spoken with a number of people already who say they want this vehicle for the box art alone!! I heartily welcome the return of the box art, especially when greeted by the look of this on the shelf. The colors are fantastic, the art itself is styling, and the overall presentation just rocks. A GREAT job Hasbro, making people want to buy this product!


Assembly: Very, very simple. Easy snap together construction, and a very limited amount of pieces add up to an easy to assemble and fun to use vehicle. Add to that, the return of the classic style blueprints, and this thing gets high marks for this as well!


Playability: Another big mark here. This thing is fun as heck to play with. Granted, it is not the most solid of vehicle, being mostly a hollow shell. Still, it has a LOT of fun factor, based on it’s usablity and on it’s action features, which normally, in my mind, draw AWAY from the toy’s playability.

The transforming feature is simple, yet functional. Going from a heavily armed tank to a sleek and dangerous looking helicopter, the Dominator can fill any position in the Cobra arsenal. They can swoop in in an air formation, then drop in the middle and transform, and suddenly a platoon of tanks is in the middle of the enemy’s ranks! A GREAT, GREAT idea and execution!

However, there are a couple downsides here, too…first of all, the helicopter blades are very, very loose. Keeping the vehicle in helicopter mode is sometimes an exercise in futility when the propellers keep on flopping around. Also, in tank mode, there is really no place for the helicopter blades to go. Personally, I stuff them underneath the tailfins of the copter, but this can bend the blades. Quite honestly, though, these are two very minor complaints with an otherwise very fun to play with vehicle.

Colors: This is an unfortunate downside. Hasbro has done such a GREAT job with color schemes throughout the 2000-2002 line, but they falter slightly here. The black and copper make an awesome combination, but I really have no idea where that yellow came from. Such nice, muted tones are really thrown out of whack by the bright trim of the weapons and the propellers. Still, though, altogether, as funky as it looks, the vehicle is still very, very cool.

Overall, this thing has stayed right along with most of the other stuff coming from Hasbro these days. A great vehicle choice, some good playability and neat extras. This is a cool addition to some terrific vehicles, and gives Cobra some much needed air support. It is saddled, though, to come with a very mediocre figure. Even if he didn’t suffer from the 2002 construction/articulation problems, the new Destro figure is still not an impressive one. I thought in his red trim here, he would grow on me, but the olive drab just is not him. Not a great figure, but that’s okay, because the normal Joes and Cobras fit in here, too. 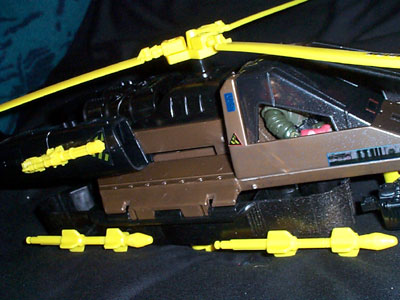 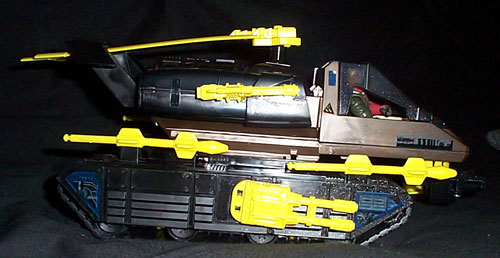 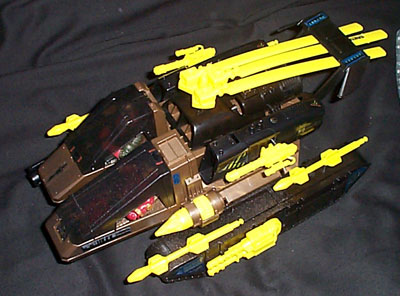 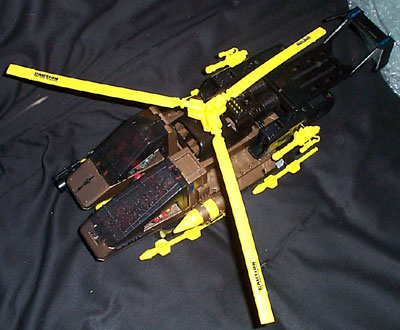 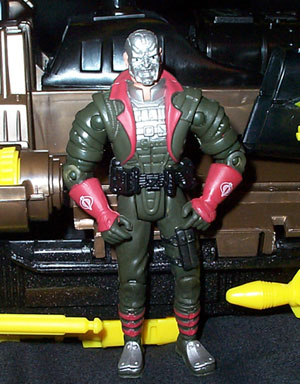