Figures, doesn't it? We've been clamoring for a decent revival of a COBRA Storm Shadow figure for neigh on 20 years, and it has always just seemed to elude our grasp. Anything from '92-'04 so far has been fraught with limited articulation, bland color schemes and downright scary molds...we got so close in VvV Wave 1, and made a huge stink...now, about 10 months later, within a week of each other, I have TWO O-ring Storm Shadows that are terrific figures, and yet a third on the way in this winter's Ninja Battles set. Granted, they're three different figures based on the same mold, but in all honesty, when it comes to this version of Storm Shadow, I say buy 'em all, because they're all pretty damn cool.

It's going to be tough to come up with new words to describe this excellent mold, since I just did a write up on it less than two weeks ago, but I'm going to give it my best shot.

As I said then, this is far and away the best mold for everyone's favorite COBRA Ninja that we've gotten since...well, probably since 1984. Nearly everything that all versions of this character did wrong throughout the years since has been done right with this version.

His head sculpt is the best place to start, I'd say, and it is an excellent one. The shape and design of the ninja mask is flawless, with the very cool COBRA sigil carved into it, and molded in a way to even LOOK oriental. It's just terrific. The rest of the mold is sculpted in a very asian style, but with enough elaborate trimming to make it even cooler. The wrap-around tunic on his chest is adorned with nicely sculpted straps, fully equpped with shuriken and small, elaborate pouches. The v-neck trimming is done in different molding and combines with the straps wonderfully. The shoulder pads are cool ornaments, yet not so oversized that they restrict articulation, and you're left with a figure with pretty close to full range of motion. His arms and legs are covered with baggy fabric, still sculpted consistently well, and trimmed with wrapped bandage on the arms and lower legs to even further accentuate the martial arts flair. All of these touches are not only conceived of well, but they're executed to near-perfection and bring us a terrific rendition of Storm Shadow...terrific enough that I don't need to keep wondering when the REAL version is going to come...it's here!

However, this version of Storm Shadow does have some inconsistencies that hurt this figure in ways that the other figure isn't affected as well. I'm not sure if it's the actual sculpting, or because of those pesky little rubber bands, but my Storm Shadow's hands are pretty warped from holding on to those motorcycle handles. Warped to the point where they have a hard time holding weapons. I think it's a combination of an altered mold and the rubber bands, and saw the same effect with the Ninja Lightning Snake Eyes as well. It's a minor thing, but another slight notch in the negative column for this version of the figure.

This figure differs slightly from the Wave 4 version in this way...some ways in good, some ways in bad. Where the Wave 4 Storm Shadow is alive with color, with red dragons, red trim and the like swirling and coasting all over the figure, this version seems almost like a "black and white" version. The trim and dragons are done in a dull, dark gray over the white base, and really doesn't look too bad. But me, I'm a color guy, and will always prefer to see some splashes of color here and there, as long as they make sense...the red dragons on Stormy make sense.

Another thing that's a slight drawback is the lack of detailing on the dragon on Stormy's back. The silver of the Wave 4 version looks really nice while the plain white one here just doesn't add anything. It doesn't really take away, but it doesn't add either, just kind of sitting there.

Overall, the paint apps here are less successful than they were for the Wave 4 version.

Here's where this version gets the brownie points, although there are a few negatives to mention as well. Let's start with the bad news first- he does not come with the Wave 4 Storm Shadow's super-cool backpack/swords/bo staff combination. Instead he comes with the same old generic sheath and sword and the two-club version of the '89 Snake Eyes' nunchaku. Bo-ring. Thankfully, this is more than made up for with the very cool white Ninja Lightning cycle.

Personally, I really love these little bikes! Again, they're not militarily realistic, but they look so darn cool! Nicely detailed, but not overly so, they are slim and streamlined and look like they could soar at a crazy rate of speed. Snake Eyes' version is jet black and red, while Storm Shadow has a pearl white w/ silver trim. I LOVE the color of Storm Shadow's bike, too. It fits the character perfectly. As with Snake Eyes, the handlebars and footpegs allow the figures to fit on the bike well and position themselves as if they're actually riding, which is terrific. It's a big added bonus to a G.I. Joe figure, which is actually equipped with the proper articulation for this sort of thing, where other figure lines fall way short.

The bike is GREAT and more than makes up for the other pseudo-subpar parts of this set. Now Stormy and Snake Eyes can face off on their Ninja Lightning cycles as they should be!

There are a couple very minor things, though...I'm not wild about the missile launching capabilities, but it is so far out of the way, that it's really not even an issue. Also, since the Snake Eyes bike had the Joe logo on it, I was kind of hoping Stormy would have the COBRA logo on his...again, not a big deal, just a little something.

While the figure itself falls somewhat short of the Wave 4 version in a few different ways, I dig the bike enough to recommend a purchase. If anything, you get another version of a great COBRA ninja, and a very cool little motorcycle with which to face off against the Joes.

There are enough bonuses to this figure to warrant a purchase, I think, even if you already own the original. If you DON'T own the original, pick this one up for sure, although I would not recommend foresaking the Wave 4 version for this one, as it is better over all, I think. 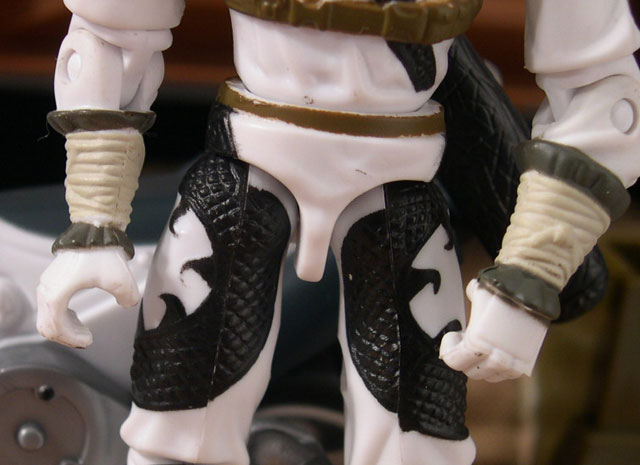 His hands are, unfortunately, somewhat malformed from being tied down to the motorcycle handles with rubber bands... 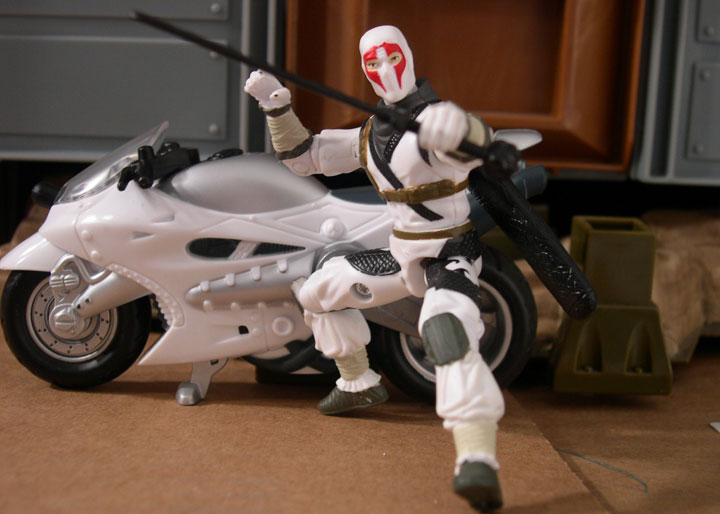