The evolution of this storm Shadow is almost as storied as the history of the character itself in the comic legend. It started almost two years ago, if I remember correctly, when some ceremonial Storm Shadow artwork leaked onto the internet. No one knew what figure it was for or where it came from, but everyone hoped that it had some ties to a 3 3/4" Storm Shadow figure perhaps in the works. It was, but not in the way anyone had hoped.

Fast forward to the 2003 Convention, where again the art was shown, this time along with a presentation from Hasbro promising big things in the future and confirming that the art was for a new Storm Shadow figure, arriving in the first wave of the next theme of figures, January, 2004. Everyone was ecstatic. Surely, Hasbro had turned things around and was finally seeing the light! An excellet COBRA-oriented Storm Shadow was finally in the wings...just a matter of time.

Fall, 2003 grew near and a local friend of mine got the email he'd been waiting for...prototype pictures of some of the new figures that would end up being part of Valor Vs. Venom, the new series from Hasbro. Storm Shadow was included, and he enthusiastically forwarded me the email proclaiming it one of the best figures made. I quickly agreed, looking at the picture briefly, rubber, ceremonial skirt and all. But upon closer inspection I saw something...something that looked like...a swivel hip? Not the typical ball and socket hip that us rabid Joefans are used to. Something foreign...something...evil.

I tried to find some answers, but my friends' source was not real well-informed, and we all had to wait until pictures were unofficially revealed...on eBay, as they so often were. My fears were confirmed--Storm Shadow did not have an o-ring, and now had spring-loaded "action attack" to boot. The internet Joefandom exploded.

Promises from Hasbro came slowly, but they swore any action attack figures would be re-released with o-rings somewhere down the line...we all wanted to believe, but after the original Wave 1 non-o-ring debacle, and now this? Well, fans had their doubts. Somehow I knew Hasbro would come through. I am no fan of Action Attack, believe me...but in speaking with the guys on the design team, their desire to put out a good product is very strong. They are unfortunately tied to the retailers and corporate whims, but want, in essence, to put out a line of action figures that kicks ass. They have to do what they do to make others happy, but in the end, they have a way of coming through...and now, finally, we have the Storm Shadow we've all been waiting for since early 2003. Was it worth the wait? Yeah...yeah, it was.

Absolutely fantastic is really all I can think of to say. The proportions are, happily, right as they should be...the head sculpt ninja mask is downright flawless. The overall sculpting is very detailed with nicely placed wrinkles in the uniform, and actual sculpted dragon patterns throughout, which look amazing. Most of the uniform is baggy, but pulled tight in the wrists and shins with excellently sculpted bandage wrap, really shining back to Storm Shadow's martial arts roots. His shoulders are slim, and his joints are nice and poseable, even with his ceremonial garb. The way the rubber "skirt" hangs only in front and back leaves pretty much the full range of movement for his ball-joint hips, which is terrific. I can't think of a better looking ninja figure that I've seen in G.I. Joe's twenty-plus year history.

I just can't get enough of this figure, either. So far it's a tie between him and Venomous Maximus as to who I've had the most impromptu "battles" with. The movement of his joints are fluid and free, and you can put him in all sorts of fighting poses, which is just as it should be with a ninja figure. The red cross trim on his uniform just adds even more sculpting detail to what would have already been a great mold, and the dragon on his back looks impressive as well. Heck, everything looks impressive on this figure!

Equally fantastic. Storm Shadow's uniform is a white base, as it should be. His deep red COBRA motif symbol on his face looks great, along with the greenish shade scattered throughout. The bandages are a slightly different color white, looking just as they should for bandages, and each color has it's place and fits in with the others to near-perfection. This figure IS Storm Shadow.

Do you notice a pattern here? Storm Shadow's accessories are just as great as the figure itself. He's got a martial arts oriented backpack with a bo staff that breaks apart and fits into notches on the side. Then his twin hook-swords also slide into notches on the backpack, and then come off so he can hold them and hack up Joes with them. Excellent accessory compliment, indeed.

What else is there to say? This figure has caused a lot of anguish to a lot of fans, but I'm hoping now that it's released, it will cause an equal amount of pleasure (although some how I doubt it). This figure is a great rendition of Storm Shadow, a fantastic foil for the VvV Snake Eyes and finally gives Storm Shadow the street cred he hasn't had since the mid-80's. Storm Shadow's loyalties seem to change like the caliber of his toys do...hopefully he's a constant now as a COBRA, and as a great action figure. 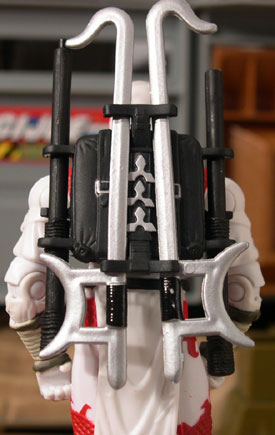 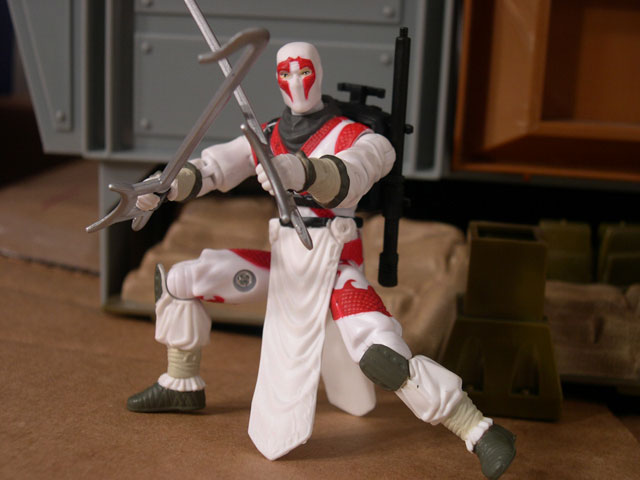 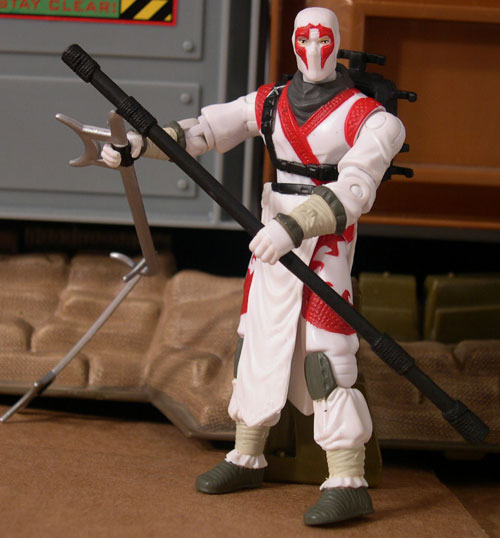 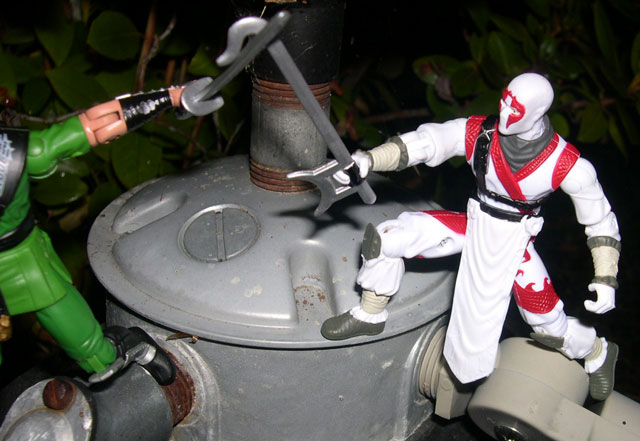 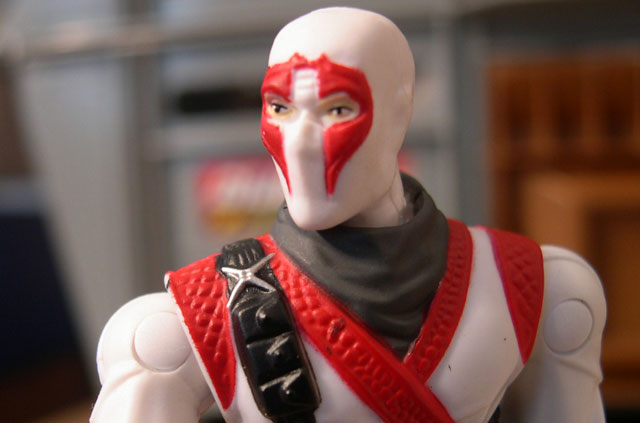