When Razorclaw first appeared, it suddenly became evident that Hasbro was indeed going in a different direction with the G.I. Joe line. Ever since they altered the packaging on Wave 1 back in 2002, they've been leaning further and further away from COBRA being a "terrorist" force, and now it seems they've gone completely the "Super Villain" route.

This, of course, would draw mixed reactions from pretty much everyone, except for the simple fact that there's nothing saying that you have to go by what Hasbro dictates. Myself...well, I prefer the terrorist angle, of course, but understand Hasbro's rationale (especially in light of recent world events) and done correctly, there's nothing wrong with a Super Villain team.

But is Razor Trooper "doing it correctly"? Well, I get kind of a mixed vibe off of him.

Again, like Neurotoxin, Hasbro is taking a more unique approach to their repaint/rerelease strategy, which is fine by me. Only in this case, the mold is altered as well as the paint scheme, and while I like this new different headsculpt, the mold itself is still pretty distinctive and I'm not sure it lends itself to a trooper necessarily.

The unusual design of the chest armor and trimmings suited Razorclaw pretty well as an expensive Venom-subject who they wanted to pool some serious resources into. Seeing a score of other troopers running around with this same equipment just doesn't really work.

The mold itself is still interesting. It's slim and proportionate, with some cool pouches, straps that are different, but effective, and some unusual, almost futuristic trappings that look pretty neat, but don't really fit. Like Sand Scorpion and Neurotoxin, Hasbro has gone the embossed route with the COBRA sigil instead of the painted route, and it works, I think. This almost seems to be a staple for the V-Troops, in that they get a molded COBRA somewhere instead of the mere painted application.

Of course, the big difference here is the head sculpt. I actually like the sculpt a lot, and it is effective in turning Razorclaw's helmet into a faceless trooper-mask. The faceplate is different and looks cool. Different from the standard Viper-type mask, but still anonymous enough to work as a trooper.

I enjoy bright colors and some different approaches to the typical color pallets, and Razor Trooper definitely delivers. His base uniform color is a lighter red/orange hue, but not too light to look rediculous. His chest plate and helmet have a nice deep red color to them as well, which breaks up the rest of the pallet nicely and compliments the rest of the uniform well. The black trim is effective where it is, as is the light gray. It is definitely reminiscent of Razorclaw, yet changed enough to look different and interesting.

Well, not much to talk about here. The only accessories that really count are his claws, which are unfortunately not nearly as effective in execution as they are in theory. Both Razorclaw and Razor Trooper have very loose claws that just pretty much flop around and don't seem useful enough to really work.

I'm not wild about the troopers all having claws either. This seemed like something that made Razorclaw special...but now COBRA has a whole squadron of Razorclaws...so what makes him so different?

Besides the claws he comes with Leatherneck's M16203 rifle/grenade launcher, which is a nice gun as well. A nice little bonus for the figure.

As I'm sure you can tell, my feelings on Razor Trooper are pretty mixed. It was neat having a cool single character in COBRA again, but now it seems every single character that appears in COBRA has to have his own group of troopers. What's next- Ghost Bear-Vipers? I really saw Razorclaw as the overall V-Troop commander, but now with the coming of Neurotoxin and Razor Trooper, he pretty much becomes another face in the crowd. He's not a bad figure, really, but like any repaint/remold, he just isn't all that exciting. 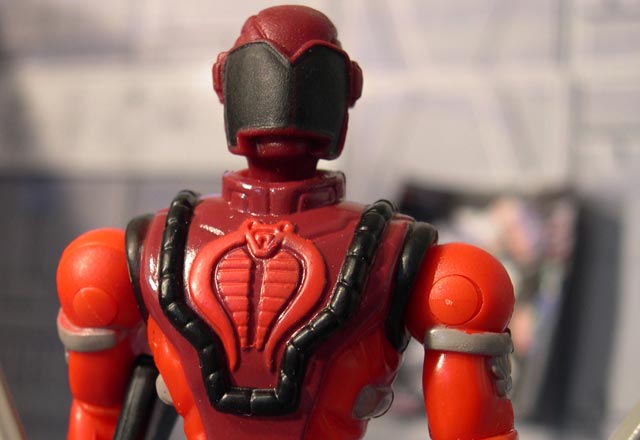 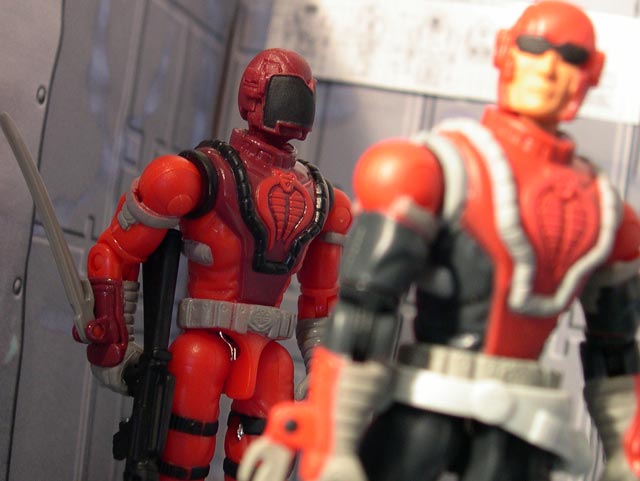 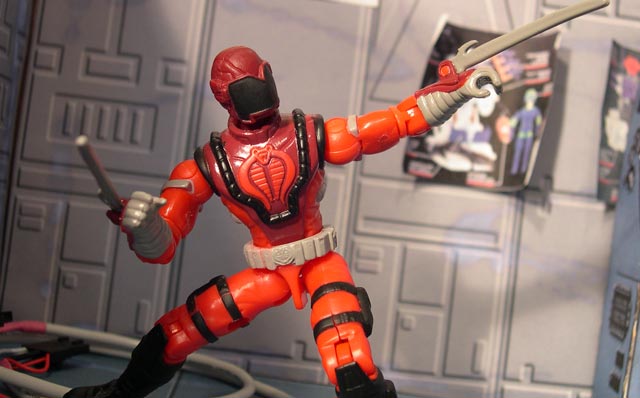