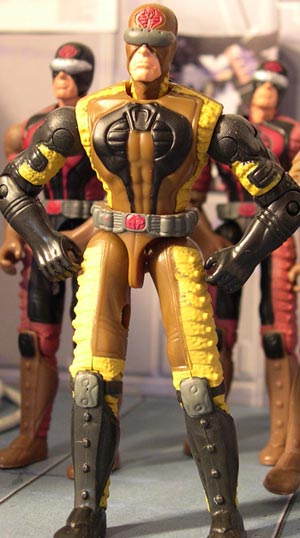 So, the Valor Vs. Venom storyline continues in spite of some fan backlash, and general concern over a storyline more science fiction than military.

The Sand Scorpions were really our first introduction to the mysterious Venom serum (along with Razorclaw),,,Sand Vipers whose DNA is combined with scorpions to create a more powerful, more deadly desert trooper.

Well, now the Sand Scorpions get a leader.

When the name first appeared on Hasbro wave lists, there was general confusion (as usual). People wondering if it was a G.I. Joe toxic specialist (maybe even a replacement for Airtight?) or would it be another double troop builder pack like the Alley-Viper/Viper pack? Well, the answer is somewhere in between.

Neurotoxin is not a Joe, nor is he a trooper. Hasbro's gotten a little more creative with their repaints and now has themselves a Sand Scorpion Leader. So, how does he work as the Venomized Sand-Viper Commander?

I think he does his job, as much a repaint can.

I was a big fan of the Sand Scorpion mold when it first appeared in Wave 1. It was a slim, proportional body, looking decently muscular, but not overly so. The ridged surface added a lot of interesting texture, and I really dug the emboess COBRA logo on his chest. Obviously, none of that has changed, since this figure is, in essence, the same mold. His sleek, almost metallic patterned arms mesh surprisingly well with the more organic textured armor plating and all combine together into a pretty interesting figure mold, made even more so by the color choices.

Other cool little touches include the metal shinguards with the small knobs, all with the cool open-mouth facemask and slim goggles. Overall, a pretty effective future-tense organic COBRA trooper that works for those folks who want a "Venomized" COBRA army, but could also work as someone in some advanced body armor as well.

Obviously with this being a repaint, this is where this figure review might differ from the original. Where the Sand Scorpion was brown and clay, and very Earth-tone, this figure uses much of the same color bases, but takes it in different, but equally effective, directions. Instead of dark brown, deep red, and touches of black, we have a light brown, tan figure, still with a touch of black here and there. The colors are nicely different from the Sand Scorpion, yet still maintain a very "Earthy" desert-trooper type color scheme. His colors also designate him nicely as a leader, being a brighter and almost more regal looking Sand Scorpion, which makes sense, given his position.

I like the brighter colors, and in general, prefer the color scheme of this figure to the original. It's interesting and different, yet still not too out there, and makes sense.

Accessories are a mixed bag here. He comes with the same Scorpion drone that the original came with, only in much more appealing colors: 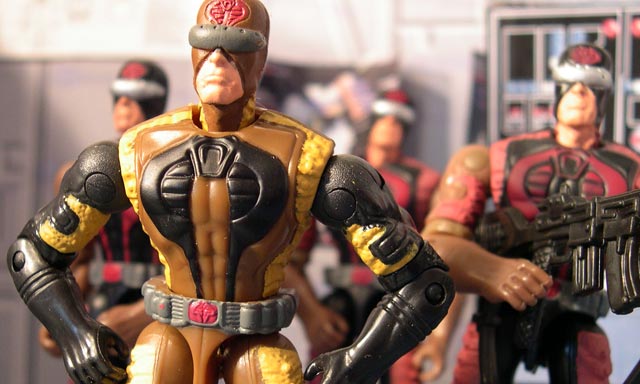 It's a pretty neat and different color pattern, making this one cooler than the original, yet still not necessarily anything I see myself equipping COBRA troopers with. Hasbro does do a good job of giving the V-Troops accessories that let them become their animal-selves, yet still making certain that the accessories are optional for those folks who don't want to use them. Besides this Scorpion, he comes with a large black Spearhead rifle, and it's pretty much disposable.

I enjoy the Sand Scorpions, and the V-Troops in general, much unlike the bulk of Joe fandom out there. I kind of dig the unusual storylines and don't need 100% military authenticity in my Joeverse, so I can see guys like this existing in it. Neurotoxin is a welcome addition to the Sand Scorpion squad, and I think the figure is nice and different, even for a repaint. The same downfalls that the original suffers from are still prevelant here--his organic look might be a turnoff for a lot of people, and as far as desert troops go, I still greatly prefer the Sand Vipers. He's not hugely desirable, and I'm not sure he'll find a big place in the spotlight for me, but for a repaint, he's at least interesting and serves a purpose. Not a bad figure, but nothing to write home about...I can't find anything seriously wrong with him, yet he doesn't jump out either. He's just kind of there. 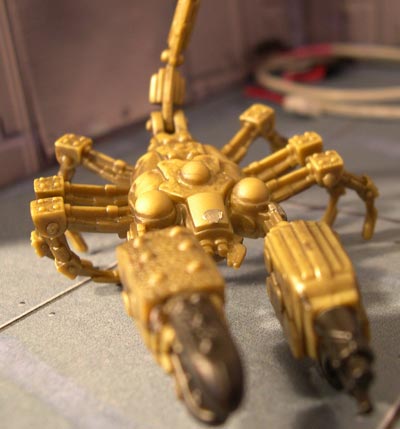