The Toyfare exclusives had always seemed very cool to me when I was younger. As a younger person collecting the Toy Biz figures, the mag always seemed to have a cool exclusive you couldn't find anywhere else...Shadowcat...Bullseye. All sorts of cool figures basically made from existing molds, but in such a way that it was a completely new character. Since then, things have grown more and more collector-oriented, but with still a cool twist. Most recently the Masters of the Universe Faker was offered, something that I immediately jumped on! And of course, the First Couple of G.I. Joe was offered as well...the always popular Snake Eyes and Scarlett.

To be honest, I wasn't really knocked out by this particular Toyfare offering when I first saw it...I mean, it looked interesting, but the figures were molds over twenty years old, and the paint schemes did not look that much different from their earlier versions. Still, the rabid collector and figure completist that I am, I sent my order form in promptly.

It took a few months, but they eventually showed up on my doorstep (on the same day that my Faker arrived!!) and immediately I was impressed.

The packaging was very nicely done and quite reminiscent of the excellently packaged Toys R Us Tiger Force set. Cool box design, with a great window looking in on the figures. The box was small and sturdy, yet very eye-catching and showed off the figures inside very well.

Now, I do have to say, that these figures are probably figures that I will never use...I bought them purely for the collection and for display purposes...and for this purpose they are great! My earlier opinion that the figures were merely rehashes of already existing figures was somewhat off the mark I soon found out. These figures were meant to be very similar to the originals, only improved in almost every way. Instead of the plain, flat black shades of the original Snake Eyes, this version is almost alive with color. Sure, his black base is still there, but all straps are dull brown, looking like a very cool, authentic leather. His chest straps have cool silver and dull gray highlights in the right spots, and his grenade is actually green and silver. The paint masks here went all out, I have to say and they really bring this figure even more alive!

The same can be said for his pack-in partner as well. Scarlett looks as she always has, but her colors are a lot more interesting. Instead of the ole tan and olive drab, she's got a much brighter shirt and gloves, almost an off-white. Her green parts are replaced by an extremely cool deep, dark purple which make her much different from the original, yet a still very cool color. Her stars, pistol, and knife are all accurately shaded, and her red hair maintains a much more realistic shade.

However, the figures were not perfect unfortunately...at least not in my pack. Snake Eyes came right out of the box with a warped T-Bar, meaning his legs could not be placed close together without one of them springing out. Very annoying. Not only that, but Scarlett's knee joint was so loose on her right knee, that she can barely stand. This turned me off somewhat, but I only hope those issues are limited and are not widespread.

Besides these minor gripes, these figures are very nice homages to their original forms, yet different enough to still remain interesting. The figures look neat, their weapon compliment is terrific, and I loved the packaging! All in all, while new sculpt fans may not care so much, long-time collectors and fans of the old sculpt should definitely try to find these, especially if you don't own the original versions. I'm glad Toyfare came out with these and hope they plan on doing many more in the future! 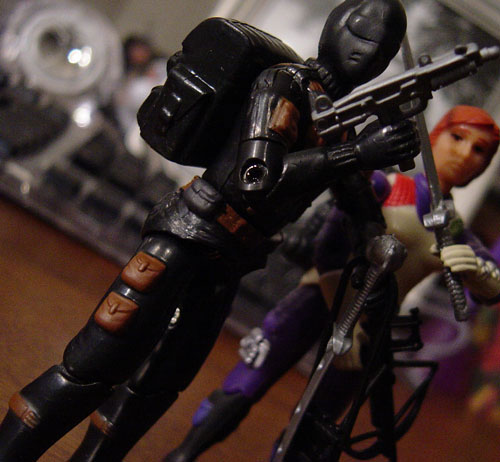 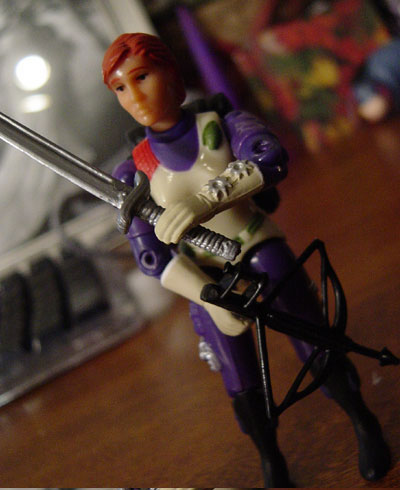 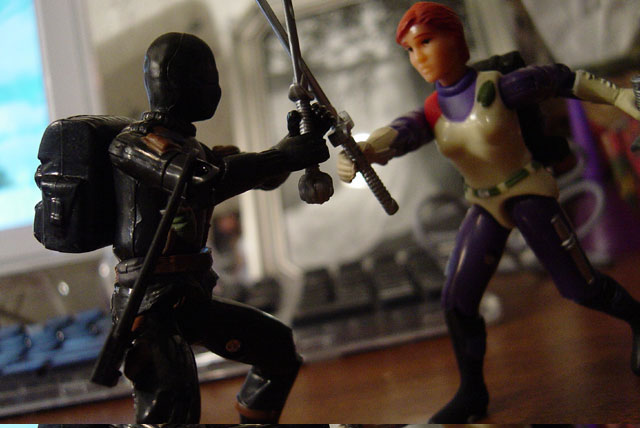 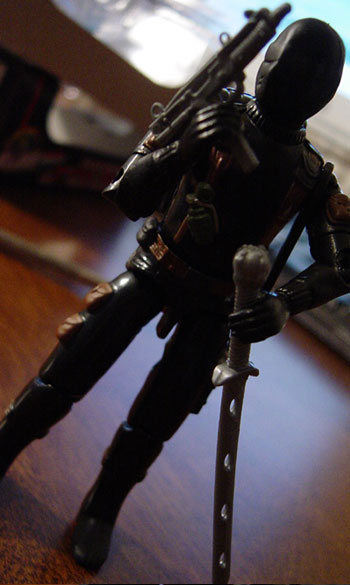 Back to the Spy Troops Exclusives