Once again with this Anniversary line, Hasbro seems to be reading my mind or somehow pulling my collection experiences from my head.  Of course, my personal experiences are probably pretty similar to countless other 80’s children out there, so I’m sure it’s mere coincidence that the RAM and VAMP were the first two vehicles I owned as a kid, and they definitely get the best treatment out of these first re-issued vehicles.

As I mentioned, the RAM was an early favorite of mine.  I used that vehicle until it absolutely couldn’t be used any more…it became the default ride for my first custom character “Mad Dog”, and even better, it became “Street Hawk” when I was infatuated with that show earlier in my life.  Ironic that it was later repainted in India to actually be Street Hawk.  Even as a kid I didn’t really understand the handlebars (or lack thereof), though sliding the hands deep under that front console gave them a very cool streamlined look.  But Hasbro manages to improve the RAM in almost every way, as cool as it was twenty-six years ago. 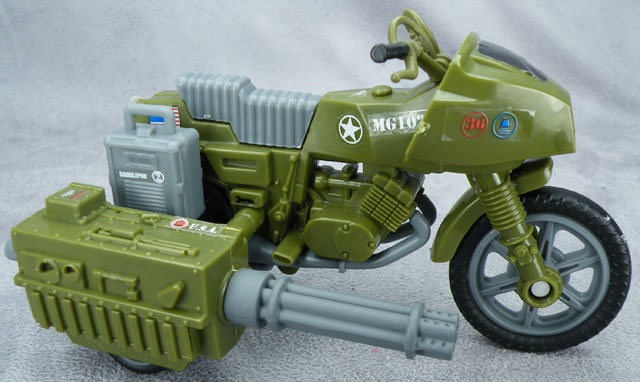 First of all, we get new handlebars that are considerably less ambiguous and more easily held.  While that means the figure sits up straighter and doesn’t look as dramatic, it makes the figure stay on the bike quite a bit better.  The sidecar cannon looks to be nicely retooled as well with a bit more detail as well as an actual rotating gun barrel.

Hasbro also added some saddlebags that actually open with small items that can fit inside.  All of the changes are relatively minor, but make a huge difference, all told. 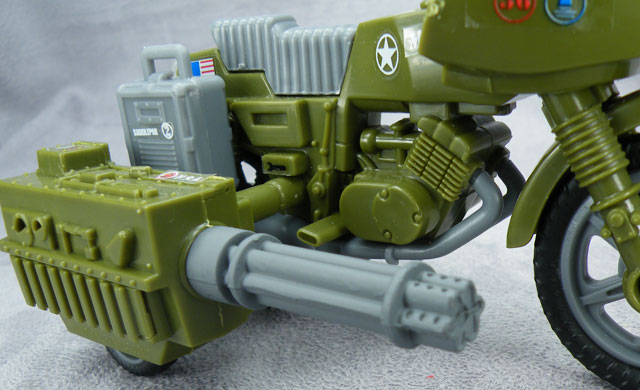 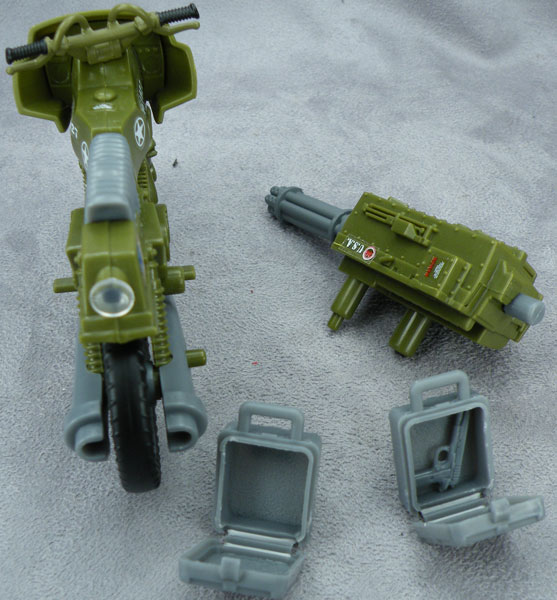 The coloring is also a significant improvement, even though it’s a minor change.  Greens are darkened slightly, grays are lightened, and the whole vehicle is just recolored a little bit, but that little bit makes a  HUGE difference, and the RAM ends up standing out quite nicely amongst its vintage counterpart.  The color pallet is a lot more vibrant overall, and all of the small changes make for almost an entirely new vehicle experience. 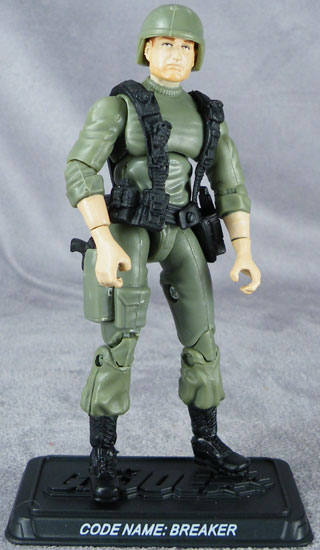 But what is new is old again, and this version of Breaker kind of redefines that term.  There is almost nothing new with this version of Breaker, and in fact he comes with considerably less gear than the comic pack version did.  There are barely any cosmetic changes, the same oversized, ugly looking melon, and really not a whole lot to be excited about.  I would have really loved to have seen Rock n Roll, considering he was shown on the bike the most, but since Breaker is on the box, I can see why they chose him.  They just managed to take the worst of the updated Original 13 and keep him that way. 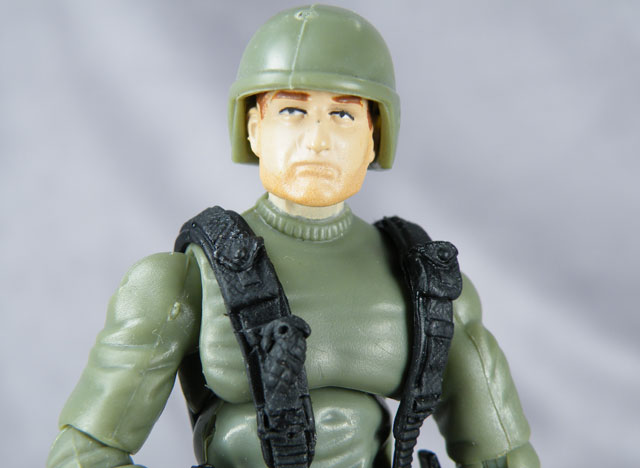 All in all, the RAM is a terrific example of what differences some minor changes can make, even though Breaker is a boring addition that adds nothing new to the table. 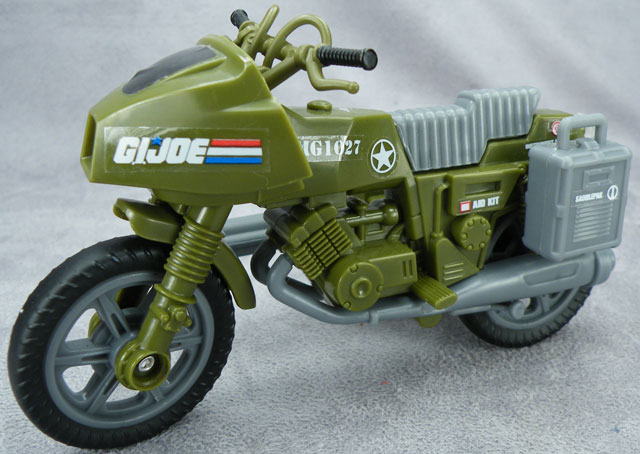 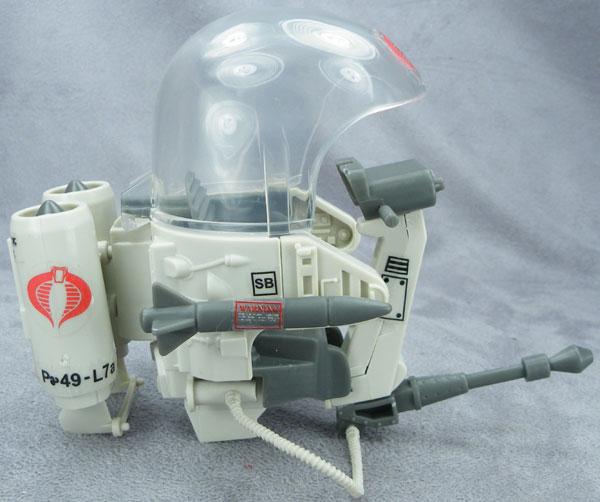 I was a late bloomer when it came to the Trubble Bubble Flight Pod.  I somehow missed it when it first got released in 1985 and even though it was a staple of the COBRA Air Force, I didn’t own one until I bought the Viper/Trubble Bubble pack in 1997.  I instantly fell in love with the small vehicle, and tracked down a classic one.  I’ve been a huge fan ever since.  While I love the gray camouflage version far more than I appreciate the plain jane white version, I understand why they went with the classic look here, and like the RAM and VAMP they have improved the vehicle in nearly every single way possible. 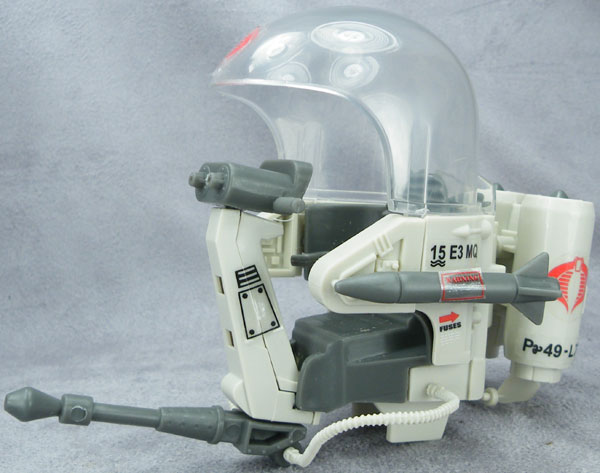 The overall look of the pod is obviously the same as it was, with the familiar shape, clear dome, twin turbines, and weapon compliment.  There is minor retooling throughout, most notably the ammo hoses connecting to that front gun barrel and the twin pegs that now hold on the engines instead of the simple straight “slot” which is barely functional.  Both of those changes are big improvements over the original design, and increase the functionality, realism, and design aesthetic.  I love those changes.
Another change is the seat “hook” which replaces the backpeg configuration that the originals had.  Obviously the Anniversary back holes are quite a bit different than the vintage ones, but the best part here is that by using the hook, this new Flight Pod can accommodate either the new style figures or the vintage style.  They don’t alienate either one, and that rocks.  Often times the changes made end up forcing the vehicle into one mode or the other, I’m psyched that the Flight Pod can exist seamlessly as both vintage or 25th.

The color scheme here is pretty much spot on with the vintage version, and I’m glad to see that, even with my love of the camouflage.  It’s stark white with great stickers and just the right amount of gray trim.  It blends in perfectly with the vintage COBRA air arsenal and makes a great backbone of the current force, too.  Fantastic. 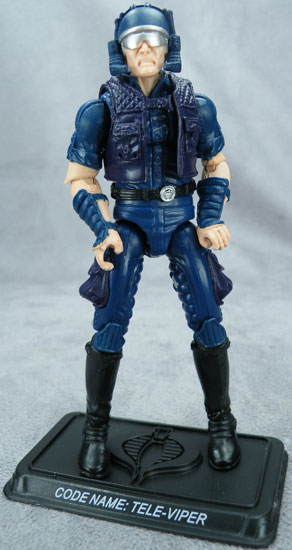 This figure immediately gives us an idea of what Hasbro is trying to do with these vehicle packs.  Using some minor new tooling, and often using new heads, they are really working to include a lot of the more minor characters and creating whole new troopers or Joes with some small changes.  Tele-Viper is a perfect example of some great retooling, even though he suffers greatly from the faults of the original tooling that was chosen.

I really love the idea of using the standard Viper as the backbone of the Tele-Viper, considering they’re sort of part of the same cadre.  It really makes sense, and even though the Viper parts look a lot different than the vintage Tele-Viper parts, with the new vest and new head, everything blends to near perfection.  I love the detail on the new head sculpt, and the vest works excellently as well.  No complaints at all there.

Of course underneath the new tooling you still have the bizarre sculpted arms of the Viper as well as the funky ankle joints, which affects the Tele-Viper in a negative light just as it does for the Viper, which is a shame.  The hands do end up fitting the controls of the Flight Pod pretty well in that strange bent-wrist contortion, but that’s about the only thing they do well.

From the new tooling and the color scheme, the Tele-Viper is absolutely great!  Awesome detail on the head sculpt, great new vest, and an accurate color scheme gives us a great start to COBRA’s infamous communications trooper, even though the wrists and ankles detract from the overall package.  Great potential, but ultimately potential that went somewhat unrealized. 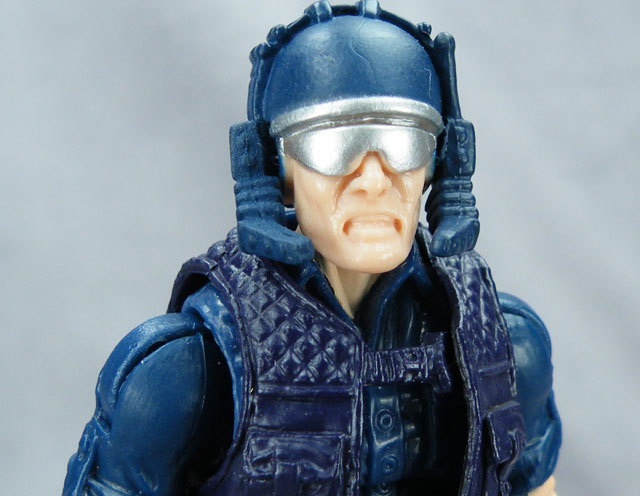 The Flight Pod is a great addition to the 25th Anniversary line that also manages to fit in very well with your vintage collection, too, and Tele-Viper is a nice COBRA Trooper that fills in a great niche.  There are some unfortunate side effects of the reused tooling, but ultimately I appreciate Hasbro’s choices here, and the overall package is full of good things.

From an all around perspective, this two-pack is a great jumping off point to the 25th Anniversary vehicle line, and a great example of how much fun Hasbro can package into one 2-Pack.  Two small, but versatile mini-vehicles that are improvements over the originals and work great with all eras of a Real American Hero.  So much better than the Armadillo and Air Chariot, and if this is a sign of things to come, vehicle lovers should start rejoicing now 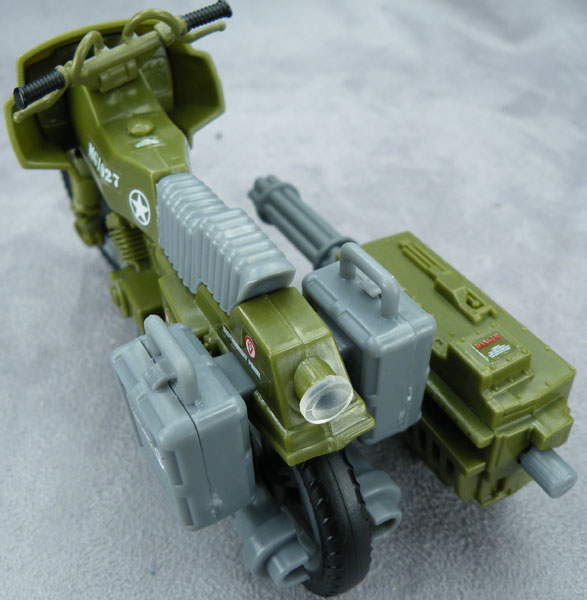 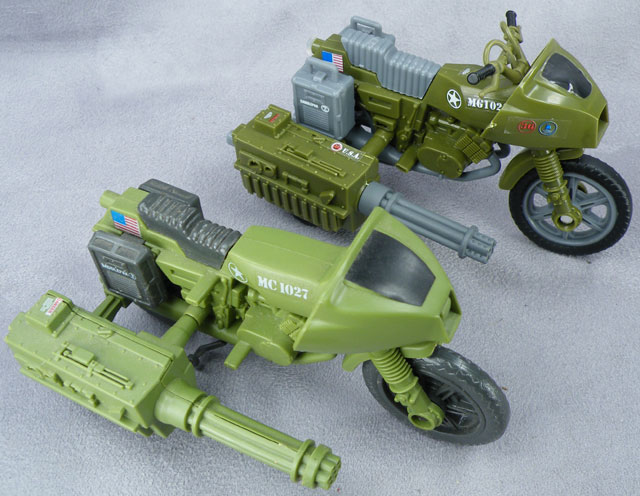 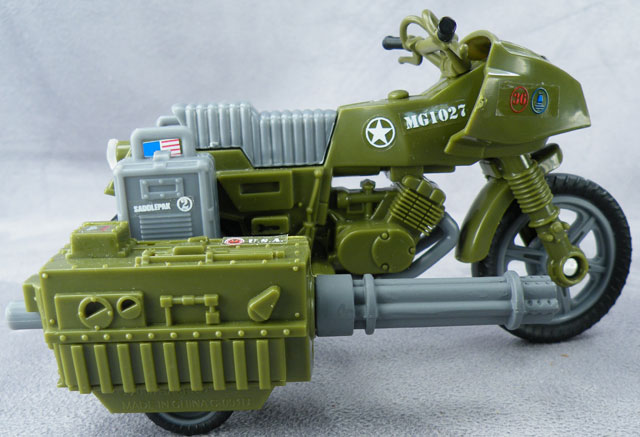 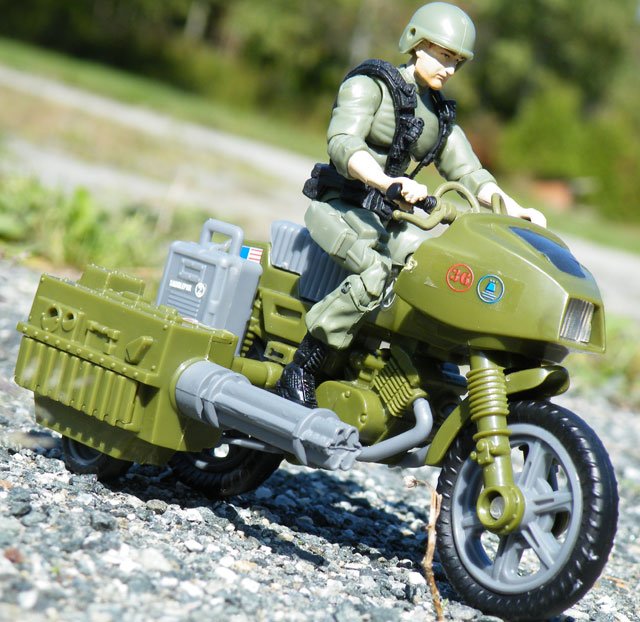 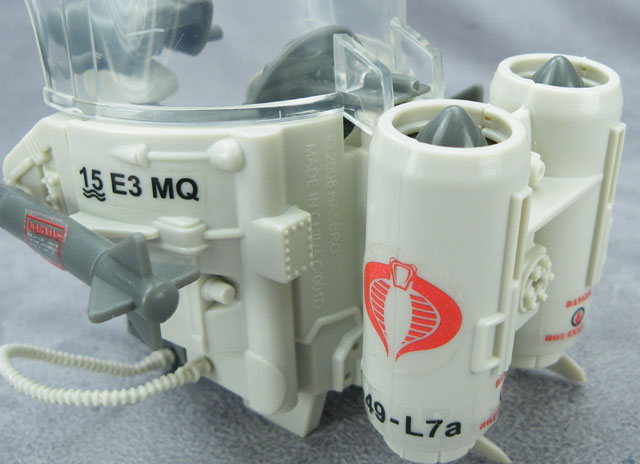 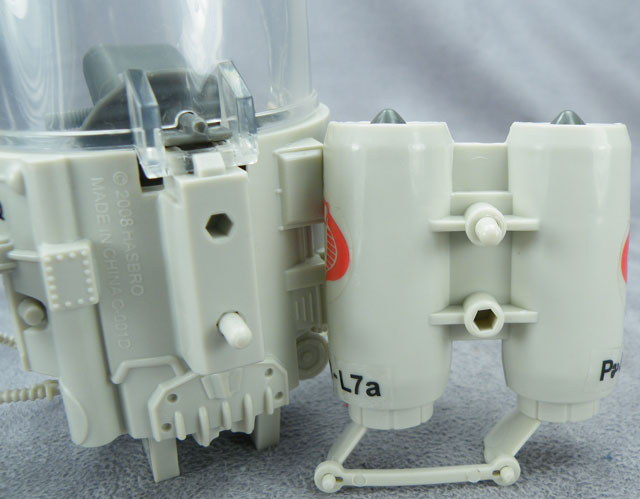 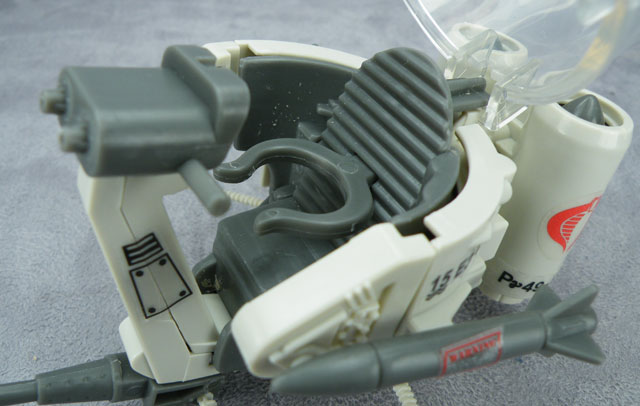 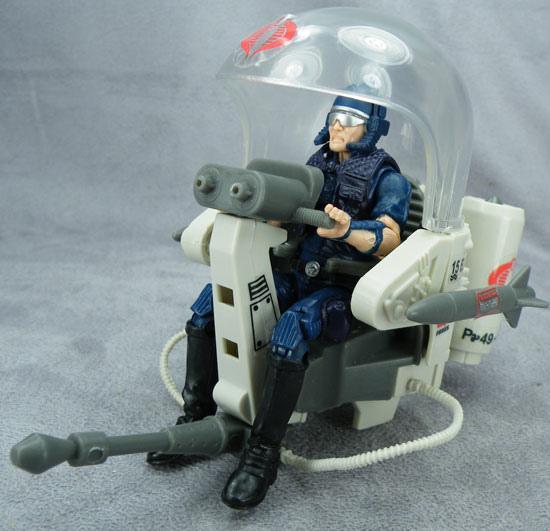 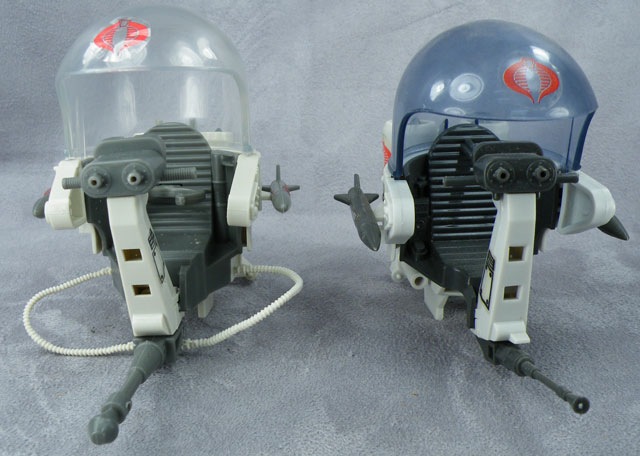 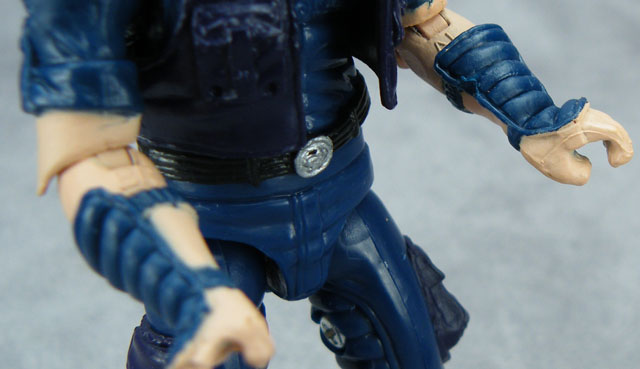 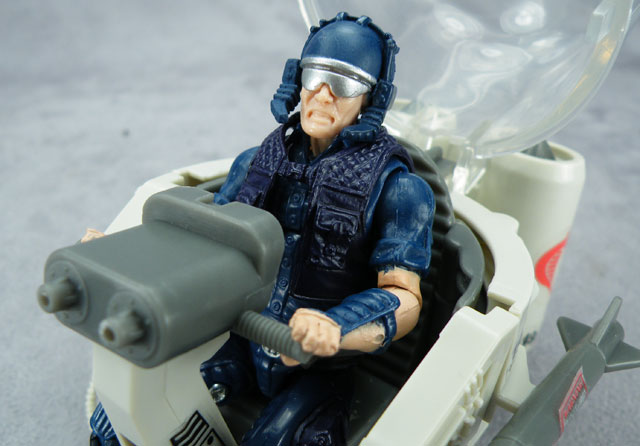