There has been much fan-based bruhaha over the past few years focusing on vehicles...all through 2007 while the Anniversary figures were just getting their legs under them, the fan outcry for vehicles was loud and clear, and Hasbro heard that call, giving us a selection of vehicles strongly based on the vintage style, though they also have some new bells and whistles. They're using a formula that's remarkably similar to the figures, and like the figures, it manages to work pretty well.

Ever since the Armadillo was the main focus of the cover to Issue #37 I've always had an affinity for it. See to me, back in the day, Flint was the man, and seeing him leaping from the helicopter with that tank in the frame was just the epitome of "cool" as a 10 year old kid. It was a small, streamlined, and aggressive tank and I love the fact that it got the early nod from Hasbro for re-release in 2008. 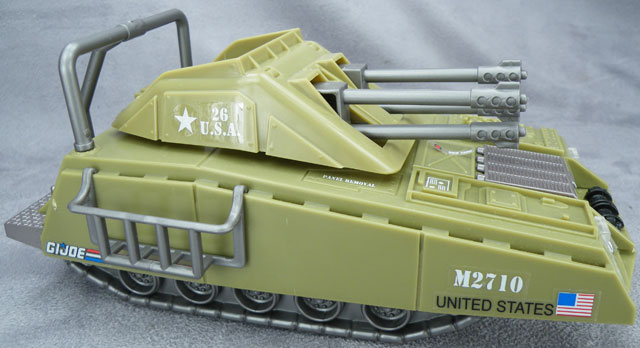 The overall frame of the tank looks very similar to the original, with the familiar sloped armor, empty interior, hold bars on the back and the quartet of cannons. But it's the small changes throughout the vehicle that make it stand a bit separate from the original, and make it an upgrade in almost every way.

As we can expect, the footpegs on the back have been retooled to fit the Anniversary figures, which does make sense, but is a bit of a bummer for folks that would like to replace their classic vehicle with this one. The small vent holes all up and down the surface of the Armadillo now serve a purpose, offering a spot to hang a saddle bag or rack, both of which come with the vehicle. It's those little changes that make this a pretty cool updated version of the classic, though I've got to admit my favorite change is with the gun barrels.

It's a fairly minor change, but those angled gun barrels just make me love this vehicle all the more. I'm not sure what purpose they serve other than aesthetics, but whatever the reason, it's a neat alteration that gives the tank a bit more "oomph" and a lot more cool-factor, at least in my opinion. Maybe it's a silly thing to get excited about, but it's those little changes that I like. 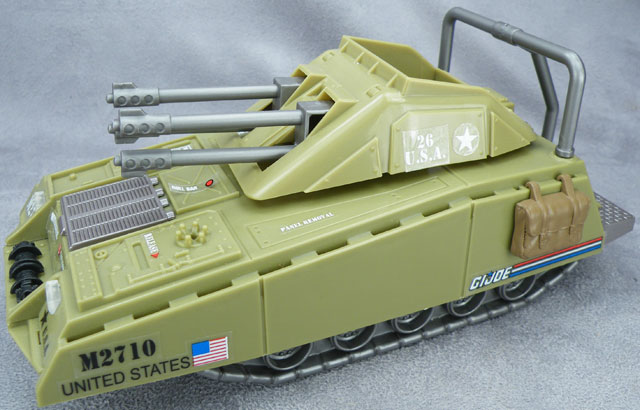 Another nice change is the shade of green they used on this new rendition of the vehicle as well as the different applications of silver, brown, and black. These minor color differences and additions go a long way to making this older vehicle feel very new again and it really has some new life. I like it a lot. 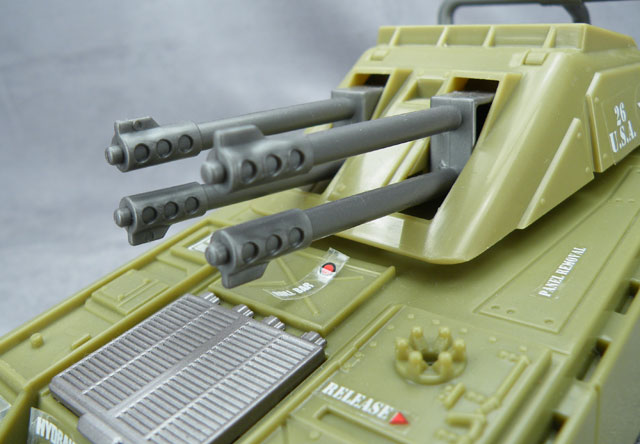 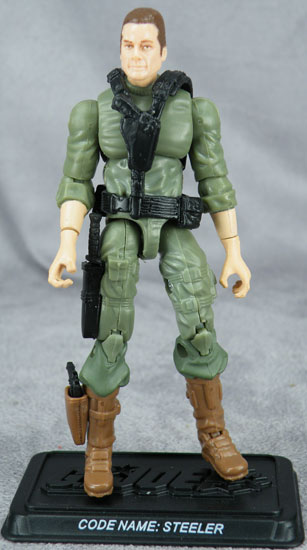 As for Steeler, he doesn't offer the same excitement as the tank itself in my mind. The figure is exceedingly bland and really does not resemble the vintage version very much. I kind of see where they were going with it, but I would have at least like to have seen the helmet/visor combination rather than just a plain green helmet that doesn't even fit his head that well.

The webgear and the head are new (as are the legs, which are excellent ), but they don't really offer enough new elements to really draw me in. I understand that they want to get the Original 13 worked into the line in any way they possibly can, but Steeler just misses on almost every level. Boring colors, mixed parts choices (including the new tooling), and a lack of critical accessories that make the character really leave me with a sour taste in my mouth. 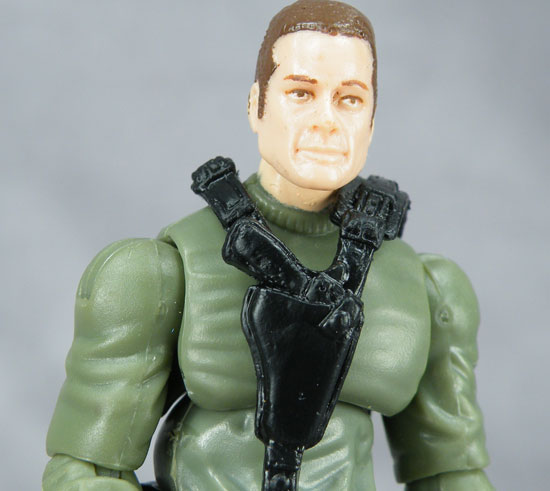 As a kid I was never wild about the character of Serpentor once he appeared on the Sunbow cartoon...I loved the idea of COBRA genetically engineering a super soldier, but once he became an obnoxious dictator and usurped COBRA Commander as the COBRA leader, I quickly lost interest in him. To me, COBRA Commander had the "street cred" and I didn't like this deux ex machina coming in and suddenly being the leader. I think Larry Hama handled it about as well as he possibly could in the comic, and made me care of the character far more than the cartoon possibly could, and the whole end of the Serpentor mythos was about as vintage Larry Hama as it gets. Spectacular. 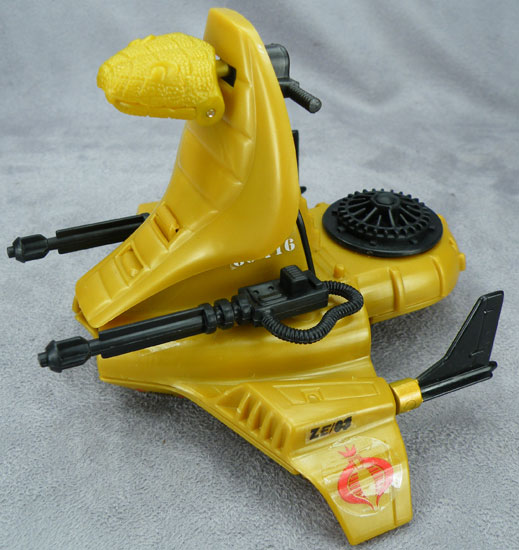 However...as much as I didn't like the character, I absolutely LOVED the toy. Back in 1986 there was no internet, no email, no nothing, and I lived in the boondocks (much like I do now). So imagine the surprise on my 12-year old face when I walked into a Ben Franklin's craft store on a trip to Maine and found this bad boy on the store shelf. In toy form, Serpentor WAS Cobra. The fantastic sculpting, the elaborate body armor and shiney cape...everything about this figure was absolutely AWESOME (which made it all the more painful when the character was so butchered by Sunbow). A big part of what I loved about the character was his Air Chariot. 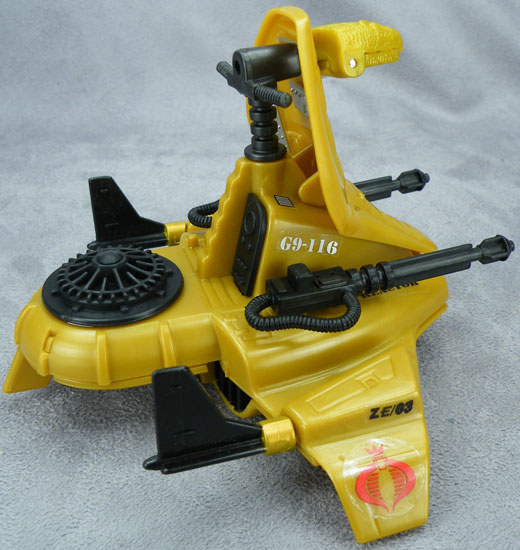 Part Roman chariot, part soaring jetpack, the Air Chariot was an awesome piece of machinery that really displayed Serpentor's air of superiority. Coasting above the unwashed masses or soaring behind enemy lines, Serpentor wasn't afraid to tackle the enemy head on and unload his mounted lasers.

This new Air Chariot appears to be pretty much the same as the vintage, only it's slightly misassembled and a few retooled parts. For whatever reason, Hasbro assembled the fan on TOP of the chariot instead of inside it like it's supposed to. I could take it apart and put it back in (and I likely will) but for review purposes I wanted to tackle it as it is out of the box. Of course, putting the turbine back in isn't quite as straight forward as it seems, as there are numerous structural differences between the two. There is actually a longer post, so it will not physically even fit inside the body instead of the outside.

I do like the retooled parts as well...actually, from the looks of things nearly the entire Chariot was retooled, but certain parts were modified. The lasers now have power hoses attached, which is a very cool touch, and the snake head now opens and closes, which adds a little flash to what could be a somewhat dull vehicle. Now the vehicle itself looks pretty neat, and it pretty much straight from the vintage line, but there are some vehicles that don't translate perfectly from vintage to modern, and I think this is one of them. From a size perspective, it's just ugly. Serpentor is absolutely huge standing on the Chariot and totally does not fit...in fact he can barely touch the handlebars. It really looks awful. I think the Chariot would actually blend in seamlessly with the vintage line, but the footpeg doesn't fit, so that limits its uses there as well.

One unintended side bonus of this Air Chariot, though, is that I actually really like how well it blends with the Comic Pack Serpentor from a couple of years ago. The gold color of the original Chariot didn't really blend with the flat green and yellow of the Comic Pack version, but this more non-metallic shade actually looks very cool with the comic pack Serps, which is a very cool bonus, considering I really love that version of the character. 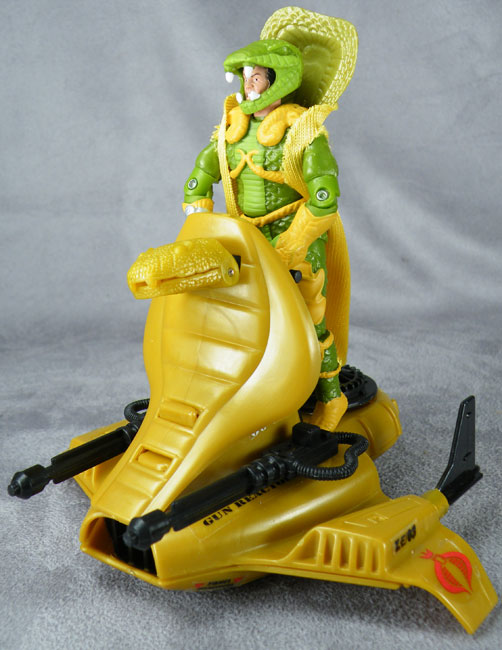 In short, I like the Air Chariot, but it just doesn't work in the scope of the Anniversary line at all, and I've kind of got to question why the choice was made to include it. I can think of a number of small vehicles that could have been retooled and used before this one. 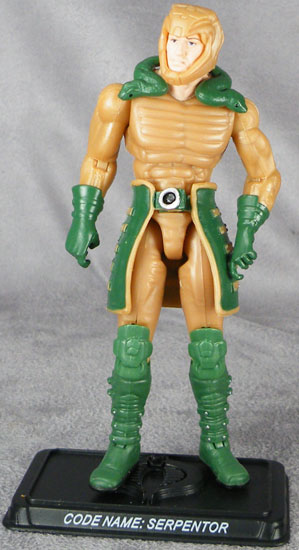 Now sometimes the figure will make up for the shortcomings of the vehicle, but that is definitely not the case here. As lackluster as the original Anniversary Serpentor figure, this figure manages to be even more so. It has all of the faults of the original but none of the charm, with a boring, non-descript color scheme and really nothing to separate it at all. I can think of no reason to really recommend the Air Chariot or Serpentor...it's too bad that the Armadillo is so great, otherwise I would tell you to just skip this set altogether. As it is, you do at least get a great version of the Armadillo, and a founding member of G.I. Joe, though there really isn't anything else to get excited about. 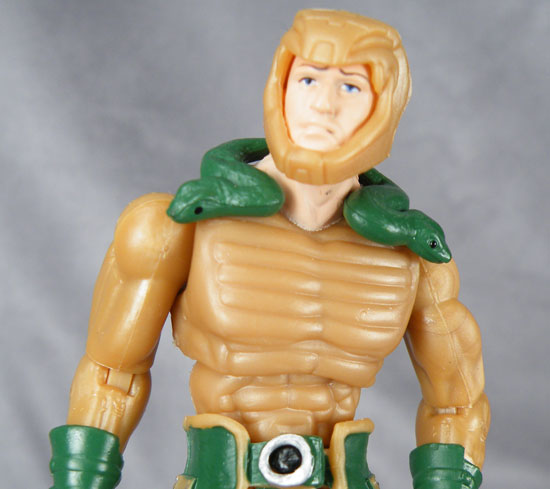 All told, Hasbro did a pretty good job with their first run of vehicles, though this set is definitely the low man on the totem pole. The Armadillo itself is quite cool, but both figures leave something to be desired, and the Air Chariot is incredibly forgettible, giving you a mixed bag all in one $14.99 box. Buyer beware on this one. Not sure what the Armadillo would fetch by itself on eBay, but that might be my recommendation, unless you really need Steeler for your Original 13. 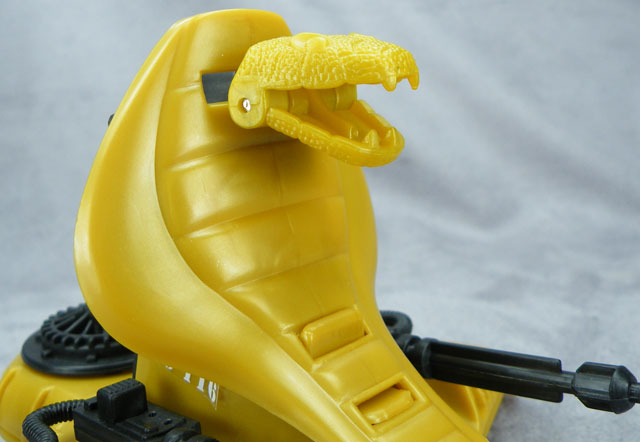 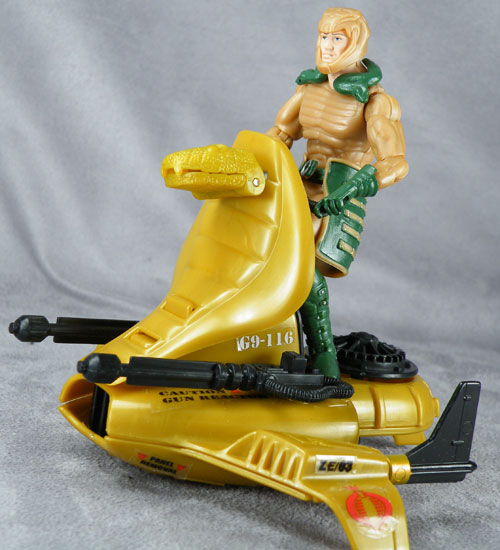 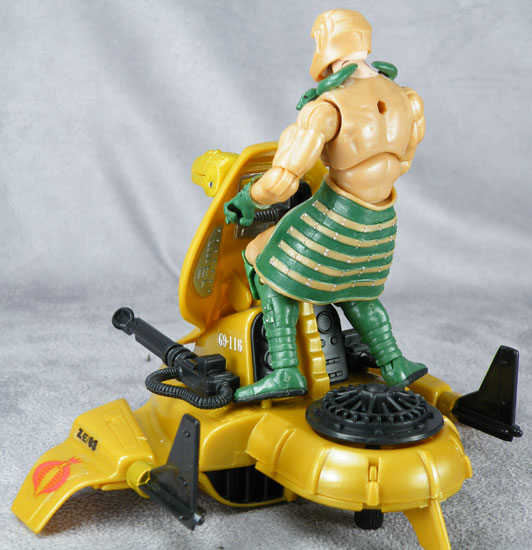 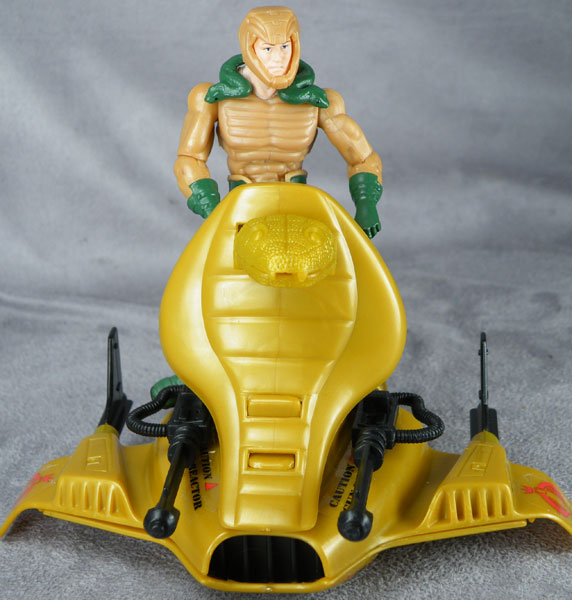 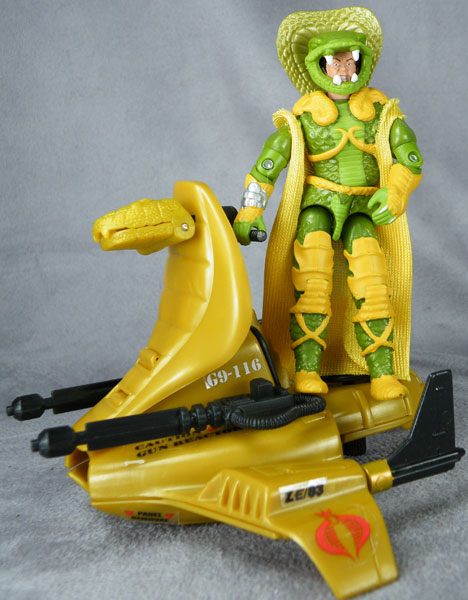 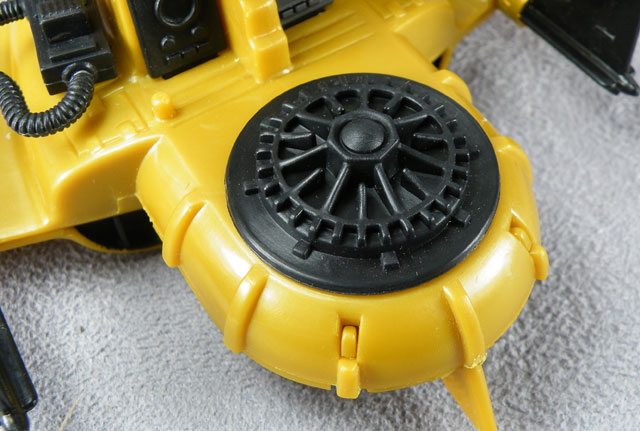 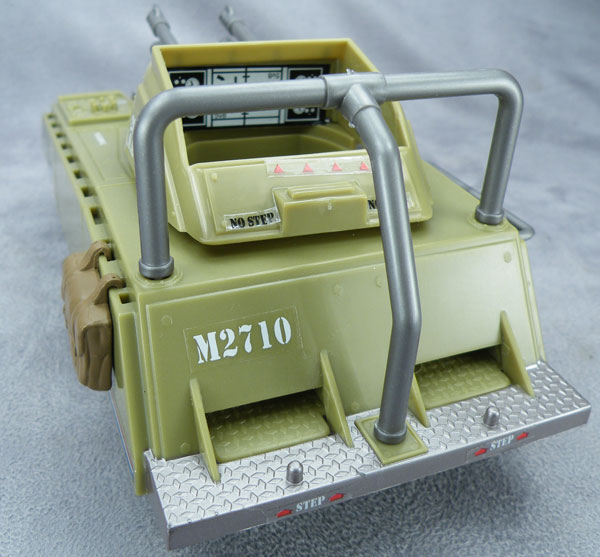 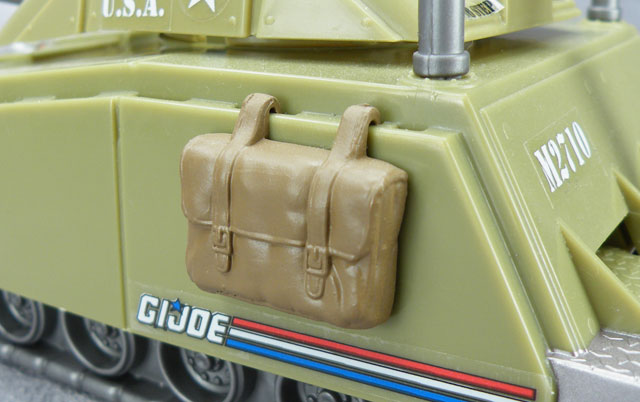 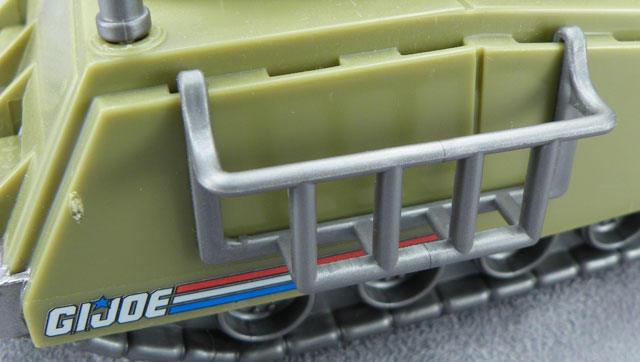 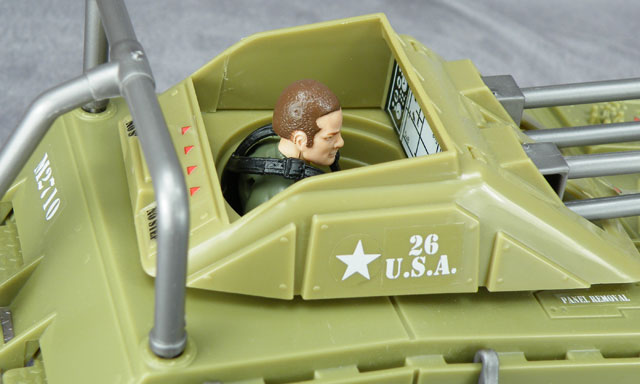 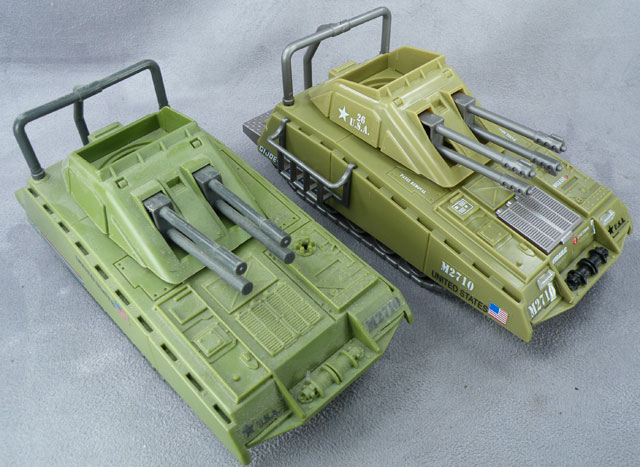 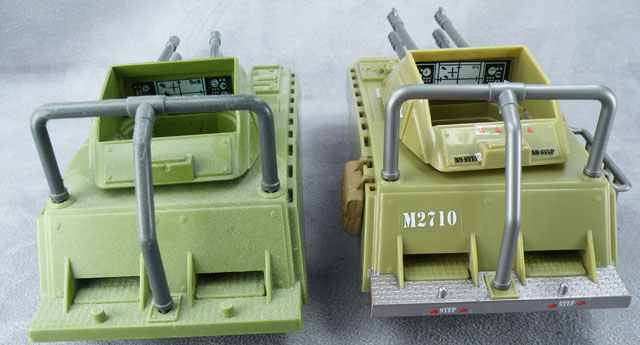 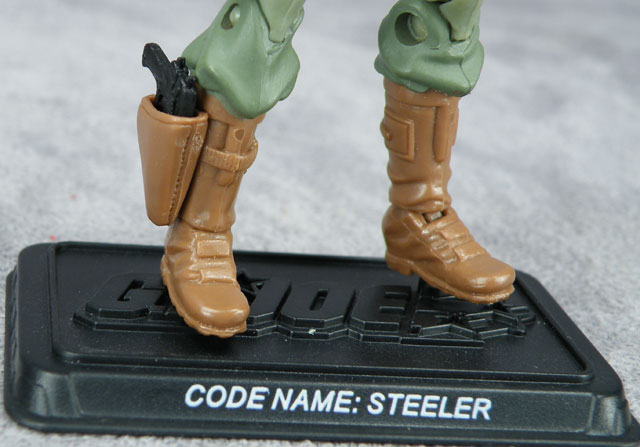 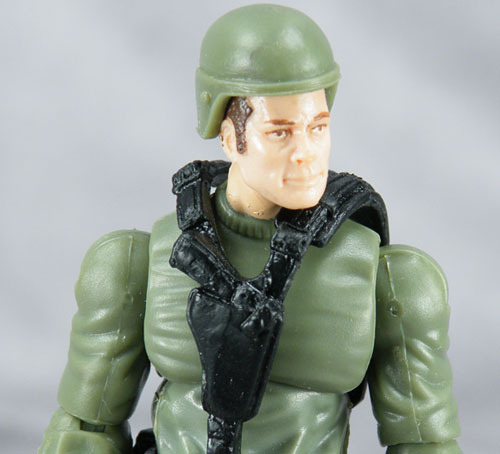 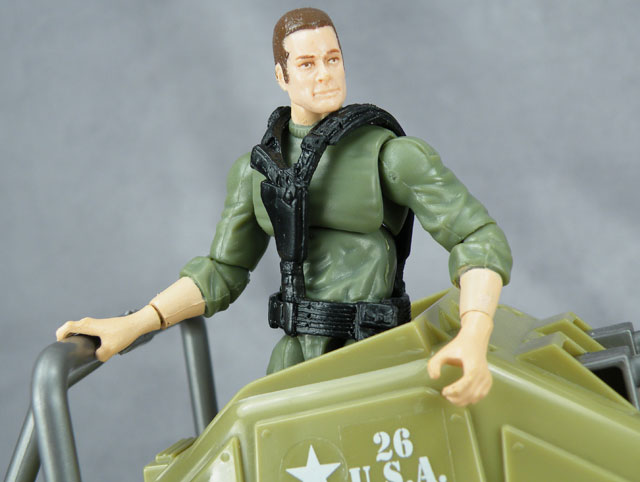