I can say without hesitation that the first Snake Eyes was by far my favorite figure of the first Anniversary run. From the overall style of the figure to the articulation and accessories, he was just a great example of what this Anniversary line could be. But a lot of folks had some minor issues with him, some of them his "gray" color, and other folks complained about the articulation in his hips. Well, I'm happy to report that with this re-release, both of those issues are fixed. Of course, that doesn't change the fact that this is yet another Snake Eyes figure already early in this Anniversary run, but as a Sigma 6 fan, this is something I've come to expect, and as long as improvements are being made, there really isn't a whole lot I can complain about. 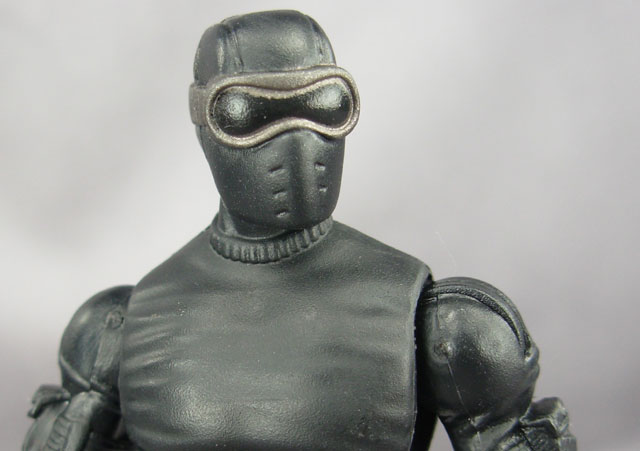 We know how cool this figure is from the first time he was released in the first Battle Pack a few months ago, and then we saw the body used again in Snake Eyes v.2...it's a tactic we should get used to, and is one that actually makes a lot of sense, thanks to the removable webgear that helps make the figures at least somewhat unique. Add some color and you have Stalker and Colonel Hawk as well, which will be coming soon.

From head to toe, this is the "Commando" Snake Eyes that many Joe fans covet. Before all of the ninja madness and convoluted history there was the nasty Joe Commando who weilded an uzi and had an affinity for spike-knuckled trench knives. This figure definitely represents the character from that era. The skin tight mask and goggles, nicely textured commando shirt, and baggy military pants with combat boots, this is the essence of the original Joe "Commando".

Proportions are pretty spot on with this figure, and the detailing throughout is terrific, really showing just how many strides have been made in the past two decades of toy design. A very nice looking figure from a sculpting perspective. From the sculpting detail in the pants, to the great holster and knife sheath, this figure is detailed to the hilt and looks great. It almost makes you overlook the fact that this figure has been released three times already. Almost. ;) 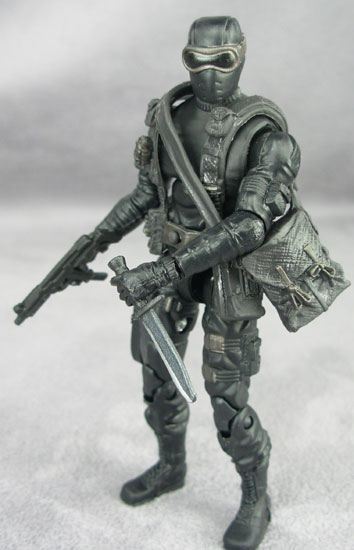 This version of Snake Eyes has the great articulation of the original, and then some. Ball-jointed shoulders, swivel wrists to go along with the typical jointed elbows. That mid-torso joint that causes some folks issues works very well here, especially hidden behind the webgear. Double-jointed knees, swivel calves and ankle joints round off the range of articulation nicely. This version of Snake Eyes, though, has his hip sockets adjusted more widely so his legs have a much greater range of motion than the original had. An improvement in every way. I'm amazed by how much difference a little bit more space in the hip sockets makes, giving the legs a lot more range of motion and more flexibility.

Snake Eyes is loaded with lots of functional accessories that all work very, very well. The awesome removable webgear with a holster, pistol, knife, and the immortal Uzi that has become Snake Eyes' trademark. All of them are here in great detail and the figure looks fantastic all geared up. Great choices. 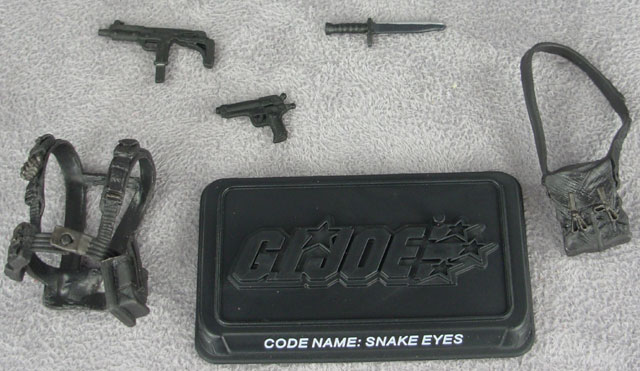 There's not a whole lot I can say about this figure that I didn't say the first time around, since it's essentially the same toy we got. I like the darker colors, I like the increased articulation, and everything else retains the coolness of the original. Would love to see more characters out there, but I've come to expect and accept the numerous Snake Eyes and Dukes that we're likely to get, so as long as there are some improvements, I can go with it.

The straight-up G.I. Joe Commando looks nice and covert ops style in his dark colors and intricate accessories. If you don't have the 5-pack yet, you'll definitely want to invest in this figure and the upcoming Wave 4 single packs. If you do have the 5-Pack, these figures with the increased articulation almost make you willing to drop the additional green on them, but ultimately I'm not sure I can give Snake Eyes a 100% recommendation. Yeah, his legs move a little bit more, and he's a bit darker in color, but he is essentially the same figure we got in the 5-Pack. But if you do end up with him in a case or something, I don't think there's anything to be overly disappointed about. Still a cool figure. 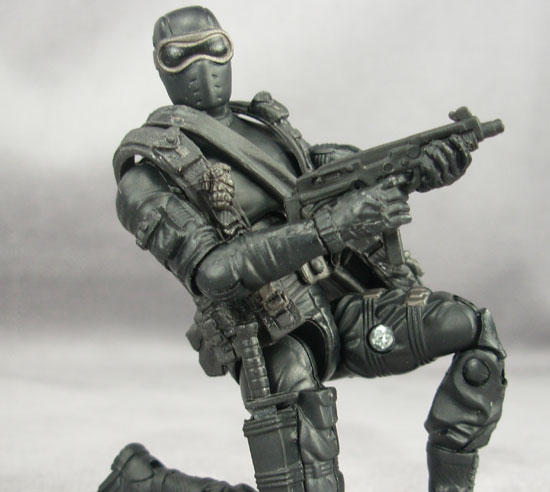 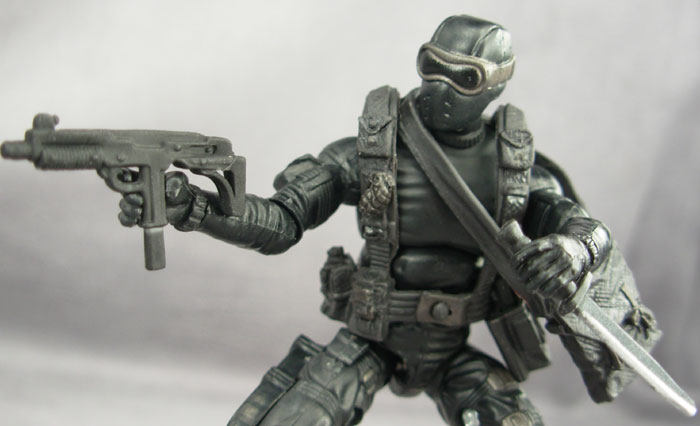 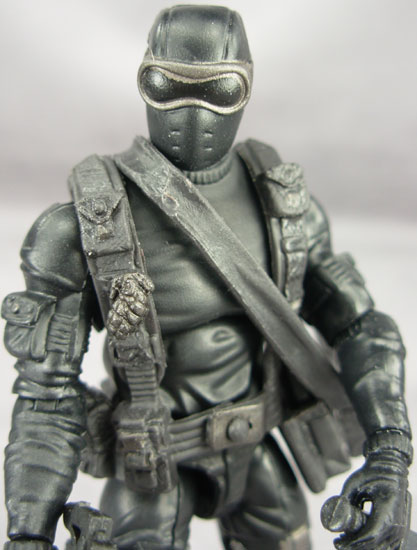 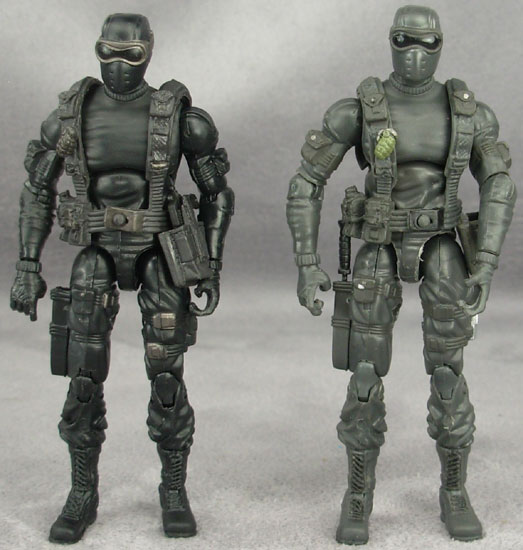 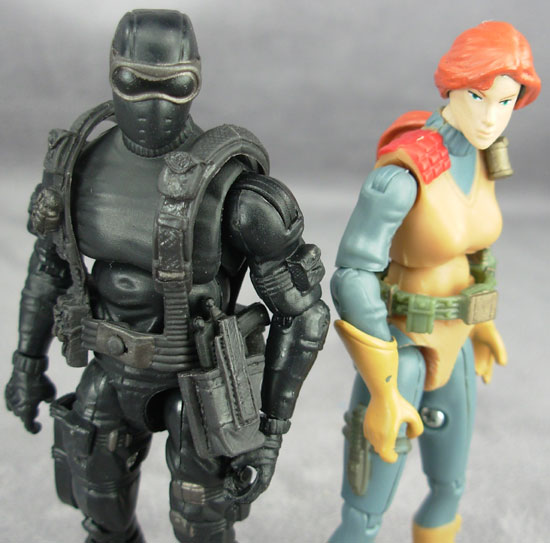 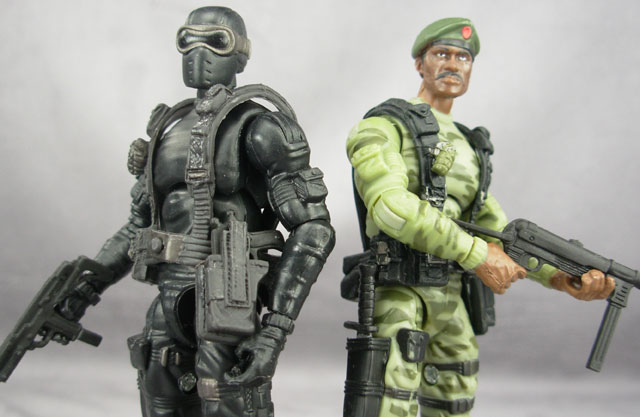