So as we near the end of G.I. Joe's 3 3/4" retail career for the second time now, it seems only fitting that Hasbro take a little break on me with these reviews. In this set, I really only have one figure to review, and in the Heavy Assault Set, I might as well just cut and paste my reviews from the Anti-Venom Set, Desert Ops Set, and Greenshirts Set. :/

Usually I have a pretty firm grasp on where I want to start with most of these reviews even before I get the product in hand. I start formulating an opinion based on pictures and random thoughts that zip through my head and jot down some notes to start off with. Sometimes I stick with my original opinions, and sometimes having the product in my hand really sparks some new visions and ideas. The Shadow Guard? Well, I'm still in the same place I was when I first saw them...they look pretty neat, but I've got no real clue what to do with them. They're non-Crimson Crimson Guards. Sure we've gotten plenty of Crimson non-Crimson troops (does that make any sense?!?!) but this is one of the first non-Crimson Crimson Guards. The CGI that came with the K-B Exclusive tank was another one, but I thought of a backstory for him pretty quick. These guys are a lot tougher.

It's for that reason that I think I'm really influenced by Fred Meyers' excellent review of these troops (found here) which really opened my eyes and made me rethink the purpose of these troops a little bit. It's always been a little silly to assume that troops dressed in the uniform that the CG's are dressed in would be in man-on-man combat. I mean, they're in fancy-trim dress uniforms...they're not going to be out in the dirt and mud shooting at people, plain and simple. Even though I've used them for this in the past (and will again in the near future), it doesn't really suit them. And as such, these figures don't seem to really belong to a "night ops" Crimson Guard kind of team. But the "Shadow Guard" has such a menacing sound to it, that these guys just have to find a place somewhere. Which is where Fred comes in. Apparently in his little Joeverse, these guys are a COBRA security team. They are a branch of the Crimson Guard, but act more like COBRA Commander's personal security force and "morale busters" so to speak, and I kinda like that plan. Teaming up with the Interrogator is a great idea, and I love the concept of them being his personal minions. Pretty cool concept. 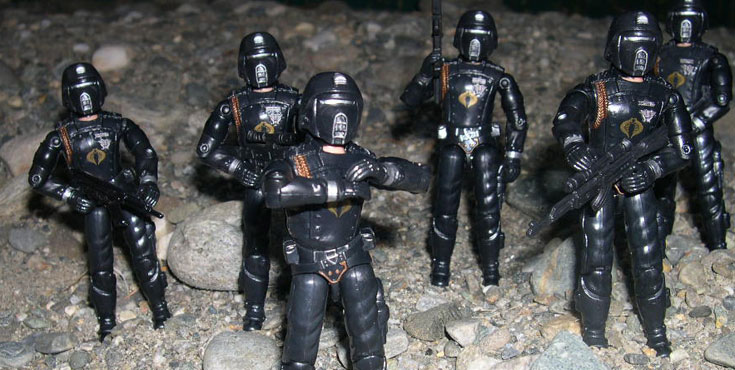 The figure molds themselves are as successful as Crimson Guard molds have a tendancy to be. Great proportions, very nice detailing and sculpting. Surprisingly the regal look of the uniforms really lends itself to the stark black coloring of this new paint scheme. The gold braid trim on the shoulder stands out nicely against the black uniform and almost looks better than it does in comparison to the red color of the uniform previously. Silver medals and wrist cuffs also mesh with the black color near perfectly, and even though there is only a very few base colors that Hasbro works with, they compliment the mold in such a way to look pretty nice.

I like the almost "beefier" appearence of these Crimson Guards, too, with the bulkier arms and heavy set overall mold...and yes, slowly but surely I find myself warming up to the oversized removable helmets. It's what's under the helmet that is the most pleasent, though, as these new head sculpts never seem to get old. The mean, menacing stare of the face underneath, with the nicely detailed mask wrapped around their face makes a cool face sculpt look terrific, and it suits the Shadow Guard perfectly. 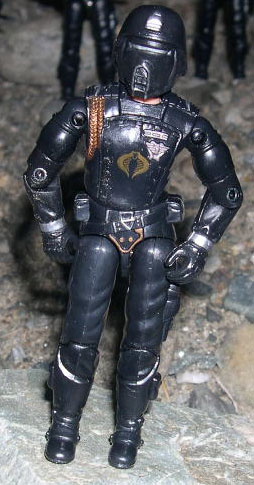 As I mentioned above, the colors are pretty nicely applied. The selected hues are pretty uninspired, with only black, gold, and silver used, but even uninspired in concept can look cool in execution...and these figures look pretty cool regardless of the blandness of the concept. If you had told me that this set was merely six black Crimson Guards, I would have rolled my eyes...and you know what? Even now that I've seen the set I wish Hasbro had done something different. Really, we've gotten enough of these Crimson Guards to choke a few dozen horses, we have no need for more. But with the understanding that they need to produce a couple more sets for Toys R Us, and that they're focus is really on the far superiour Direct To Consumer sets, I'm kind of giving these last sets a pass. If I thought stuff like this was going to really be our only option, I'd be a lot more irritated and a lot less forgiving. But based upon the BAT Attacks set and the COBRA Night Watch set, this doesn't sting quite so badly. It's still pretty "phoned in" conceptually, but I can't argue that at least the end product looks pretty neat.

I really cannot fathom an excuse for the weapons assortment however. There is absolutely no reason given as to why these figures all come with silent "ninja weapons" and as far as I'm concerned, they won't even use them. The Crimson Guard are best suited with guns in their hands, and that's what mine will have.

So, based on concept and thought, this set really gets failing marks. They didn't put any real effort into it beyond slapping some black paint on and calling it good. But, I still think the end product looks pretty neat for what it is, and that these figures are at least somewhat interesting. Do I think you need to heavily army build these? No way. Really, you're not missing anything big if you DON'T get these, but they're neat enough, and if you're a big fan of the Crimson Guard mold like I am, these will still provide you with some enjoyment. 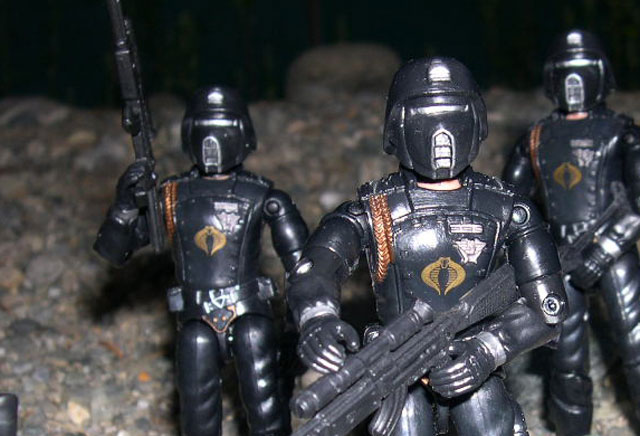 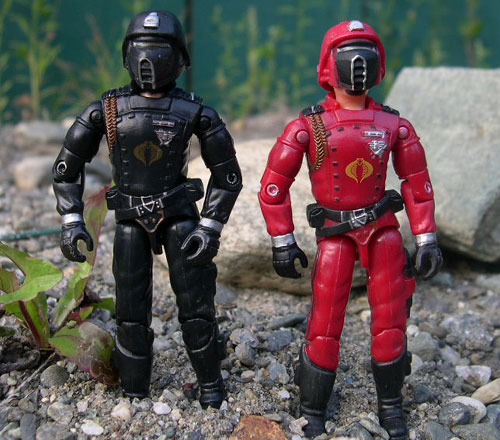