I've loved G.I. Joe from day one because of the way the toys are designed and the way the figures are made. Figure design, molding, paint schemes, and implementation are definitely reasons why I love this toyline just as much over twenty years later.

But I wouldn't retain this much enthusiasm if those reasons were the only ones that drew me in. At its core, the reason I love this line so much, is simply because of the characters. Even during those "dark years" where no new Joe toys were being produced, I was still a Joe fan. The characters have that kind of impact. Even without new toys, Duke, Snake Eyes, Zartan and Destro are very much alive and really make you a part of the Joe mythos.

This was something that seemed a little lacking in the Joe Vs. Cobra line. Each figure was either a new version of an established character, or the character seemed a cardboard cut out...a generic person who didn't really serve too many purposes, except for filling a uniform. When Spy Troops arrived, this really seemed to change. Hacker was the first one to jump off the page at me. He had some kind of character that really appealed to me. He was cool. Then there was Barrel Roll. I have no idea why, but this character really made an impression. Something about him made me think he was someone important. A character who really had some depth and someone who a story could be built upon.

Still, nothing really progressive developed as far as storylines go...until this figure came out. Blackout just seemed like another Cobra just a few months ago, until it was revealed that he was Barrel Roll's brother! For some reason, this little tidbit of information made a world of difference to me. Blackout was somebody real now...he had a history and a purpose. There was a reason behind his madness and he was a character who really, again, jumped out at me. Blackout immediately became flesh and bone.

But Joe toys are not based on character alone either. As important as characterization is, the toyline wouldn't exist without decently done figures and nicely sculpted molds to back up these characters. From what I'd seen of Blackout, he looked neat...but nothing really cool. But, when I actually got the figure, my mood changed.

Blackout's mold is very cool, in my book. It's a perfect blend of cloth and armor plating with metallic armor on just about any part of his body that it will go. His tunic fits together perfectly and the mold is as intricate as I've seen. Twin grenades (painted green!), buckles, assorted pouches and a knife bring this all together great. His arms are somewhat plain, except for the wicked looking forearm armor proudly emblazoned with a metallic Cobra elbow pad. His legs are fairly nondescriptive, with just the right touches of metal here and there. His head sculpt is cool as well...his hair style is different, and his face looks fairly normal, which is unusual for a Cobra figure (but a welcome change). His arms/hands threatened to have the "CLAWS Commander/Dr. Mindbender" Syndrome, but actually end up a lot more functional than the other two. His weapons can be held just fine, and he doesn't look awkward at all.

Possibly one of the finer points of this mold, I'd have to say, is the molded rubber belt. Hasbro has been tinkering with this idea to varying degrees of success, and this one is the most successful I've seen. Just the right amount of pouches and straps topped off by an awesome working holster!! Blackout even comes with a great new pistol that fits in perfectly. Well, almost perfectly, anyway... :)

The colors on Blackout are great as well, and fit his namesake. His uniform is primarily black, as it should be, but is adorned with some great silver highlights and armored pieces that all compliment each other. Add the right touches of brown and those cool twin green grenades, and the figure ends up great.

As I mentioned while talking about the molds, Blackout's accessories come together nicely as well. His new pistol rocks, but is plain enough to work for everyone. His rifle is awesome as well, and even though it appears somewhat out of scale, the weapon itself is a great one and one I can see Blackout using. Even better are his infrared goggles...Hasbro's managed to make a pair of goggles to the correct scale and it works great on him. And I'm very glad he's got these goggles, too, because without them, unfortunately, our new Cobra...well...he's kinda cross-eyed. :( Actually, he's quite cross-eyed. I'm sure this was some error on Hasbro's part, and I'm really hoping for a running change that will fix the issue, because this small glitch really takes away from the figure. As soon as I get a few extra minutes, I fully plan on repainting the eyes, and I hope we get a straight eyed Blackout in an assortment soon.

Besides this minor issue, this new Cobra figure really clicks on all cylinders. He's a figure that should be proudly featured in Cobra armies everywhere, and he will be appearing in my Dio-Stories quite soon and probably fairly frequently. 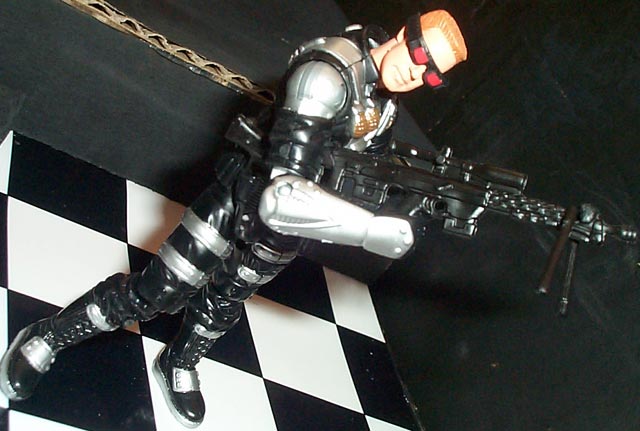 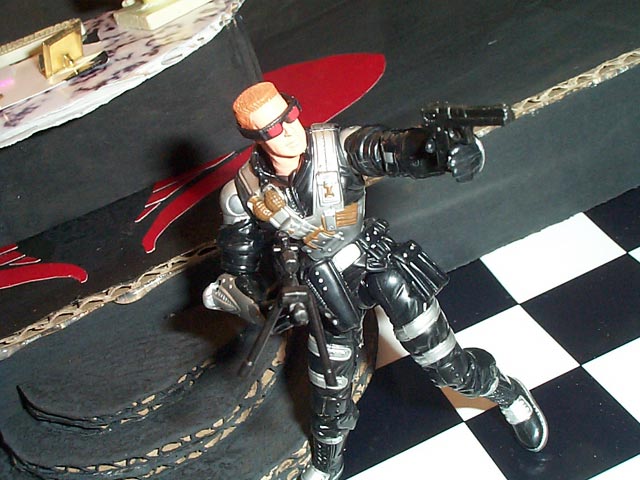 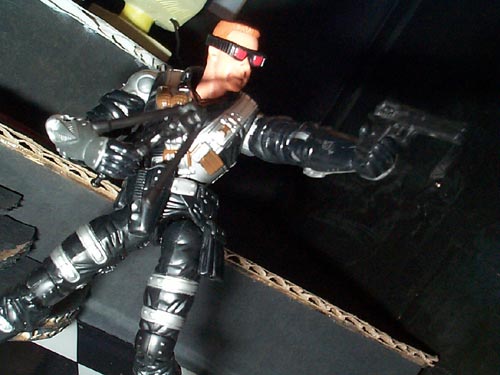 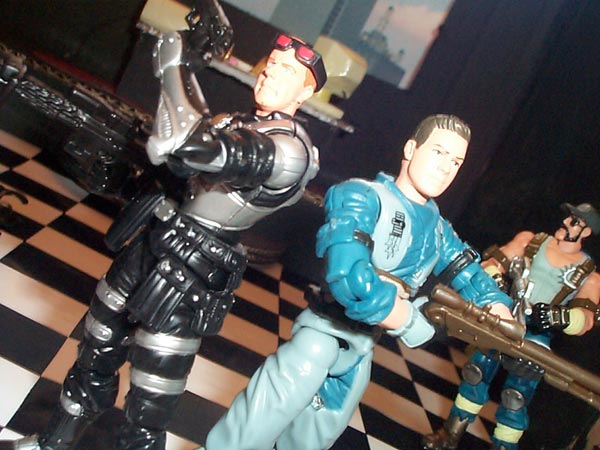 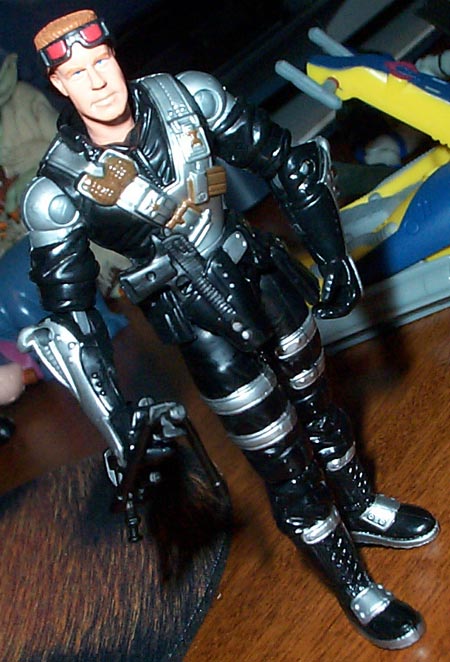 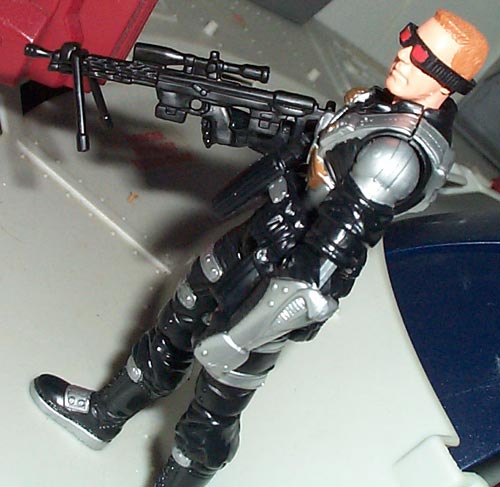