When the infamous American Dream Comics first got prototype pictures up, I was pretty certain this guy was Recondo. As it stands, I think this figure would make a very cool Recondo...but, he makes a pretty neat Crosshair as well. This figure is a G.I. Joe fan's dream, in my mind. Realistic military paint scheme...great weapons, TONS of cool gear...in Wave 5, Crosshair is the man!

This figure may very well be the pinnacle of what Hasbro is capable of. I think even die-hard classic sculpt fans would have a hard time finding fault with this figure. Sure, his shoulders are a little broad...he has the dreaded paint wipes spread throughout the figure...but man. This figure is just darn near perfect.

Crosshair was an unknown when Wave 5's lineup was first announced. No one knew if he was a Sniper or exactly what purpose he'd serve...I personally forgot about him on several occasions and he really wasn't the focus of Wave 5 at that point. That has all changed by now, without a doubt. I have a feeling people will be talking about this figure for a long time...Hasbro has done an incredible job with Crosshair, I just hope they can keep it up! :)

His facial sculpt is simple, yet very effective...he has an immediate personality as soon as you see him. His face is stern and serious, and his mold is just plain amazing. First, let me say, for whatever reason, I LOVE the quilted-shirt look on an action figure. I don't know why, but I just think it looks great. Crosshair is no different. But take that quilted shirt and cover it with a baggy half-shirt with 2 grenades at the right chest pocket and you have a really cool look. The way the two patterns mesh together is just great. The pants are the familiar baggy army greens, with twin brown kneepads, a pistol in it's holster on one thigh and a canteen on the other. Then you've got the little touches like the dogtags, scarf around his neck, and his fingerless gloves, and suddenly, this figure just all comes together. Absolutely amazing sculpting job whoever put this gem together.

...not only that, but the paint job is practically a work of art. Anybody who loves paint wipes need only look at this figure to explain why. The green shirt and pants just come alive with the liberal application of dark wipes over the lighter green clothes. I mean it adds so much depth and detail I can't even imagine what this figure would look like without them! Combine those obvious points with the little touches of gray on the boots and gloves...the silver pistol and canteen and the gold grenades. Absolutely beautiful paint apps, that is for sure.

But then you get to the point where this guy really shines. His accessories. Wow. I have never seen a set of accessories bring a figure alive this much before. Not in 1982, not in 1990, definitely not in 2002...with his accessories, this figure gets even better, if you can believe that. First, the removable boonie cap. Something the Joe line has been needing for 20 years and we finally have...then, the rubberized web gear. Again, wow. Outback's gear was pretty close to this cool, but add in the belt, the hat, and the amazing sniper rifle, and I'm sorry, but Crosshair reigns supreme.

But of course, that leads me to my problem...how to use him? I think that this figure will be on the top of a lot of people's favorites list for some time to come, which means, I may try to steer away from using him too much. I like my characters obscure, but this guy is almost too cool not to use. It'll be a tough call, but I'm sure he'll see some action in Joe stories to come, from me and from a lot of other people out there, too. In one 2 pack you get Crosshair and Cobra CLAWS Commander...if you see this pack, absolutely pick it up! Crosshair is a figure that you can just sit and stare at...excellent work, Hasbro, let's keep going uphill from here! 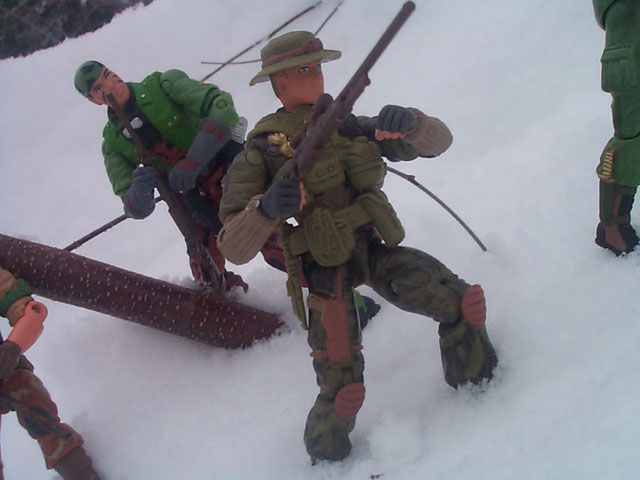 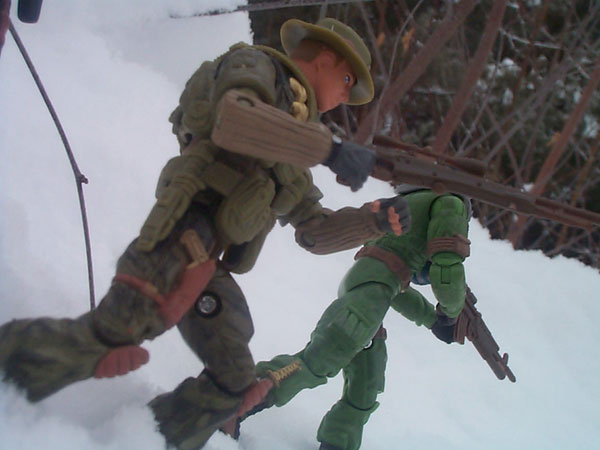 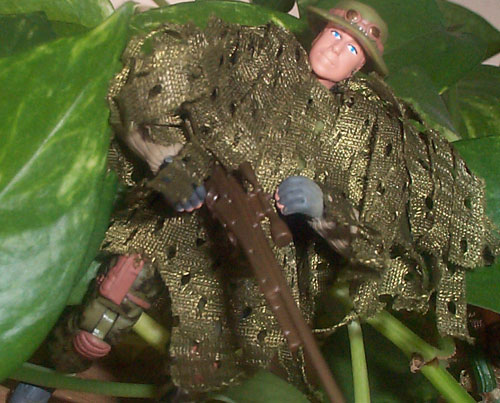 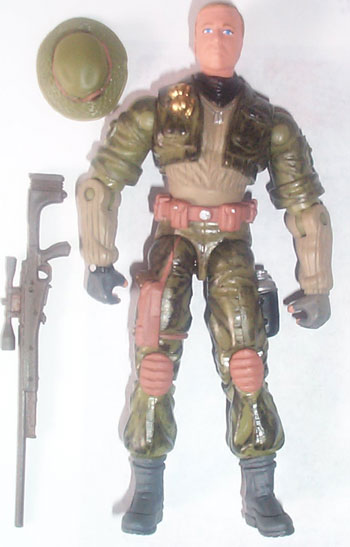 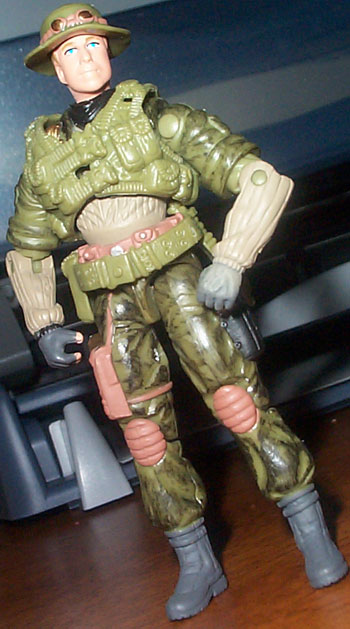