Ever since I was young, I was very enamored of the Crimson Guard concept and the figures and everything to go along with it. The idea of covert Cobra Agents, incredibly intelligent, skilled and dangerous ingrained within the fabric of the community, working from within just seemed like a very cool concept.

Not only that, but the figures rocked as well! The Silver and Red shades just really brought them out amongst the Phalanx of other Cobra Troopers and heck, even their "Crimson" namesake made them very cool.

When I heard that they were releasing a new "Crimson Strike Team" as an exclusive for the next G.I. Joe Convention, I was both thrilled and upset at the same time. Thrilled because there appeared to be an excellent army building set of my favorite branch of Cobra coming, but upset that it appeared to be a Convention-only piece. However, thanks to the folks at MasterCollector, there was another way to this fine piece! As soon as I could, I faxed them all appropriate information so that I could own this beautiful set of possibly great figures.

That was in February. Here, five or six months later, finally, I have the Crimson Strike Team in my possession! Was it worth the expense and wait? Read on to find out! J

This first review will be the Crimson Twins, Tomax and Xamot. Since 1985 they have been the Crimson Guard Commanders, so it is only fitting that they fill that role here as well. But looking at the filecards, it appears that this Crimson Team is NOT the Crimson Guard we all know and love…it is something far more sinister. The way I see it is as a branch of the Crimson Guard on the surface…but these particular troops are blindingly loyal to The Baroness and the Twins, 100% controlled only by them, and willing to bend to their will even before they bend to Cobra Commander's. This alone makes them somewhat separate from the standard CG's, who are devoted and blindly loyal to CC himself and none other. That is why this Strike Team consists of Crimson Vipers, and NOT Crimson Guards…the Guards just wouldn't do it…they'd die rather than betray the Commander. Still, these Vipers are very cool…I highly recommend you go to YoJoe's Filecard Section and check out all of the filecards, listed under "miscellaneous". They are very well written, and I think they show some very cool aspects of this Crimson Strike Team.

But, back to the review… 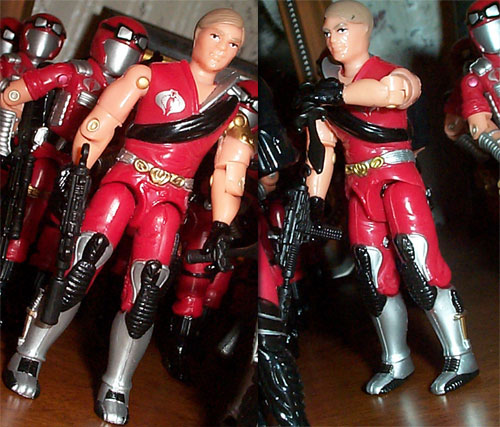 At face value, I'm not too sure where I stand on the Twins. They do look very cool in red, silver, and black, but it's hard to see past their classic blue and red looks. I have not yet done a head swap to see what these figures look like with darker hair, but I think that might improve my opinions on them. As it stands, they are cool figures, retain their classic molds, and the new paint update is new and different and very cool. I LOVE silver Cobra symbols…I'm not sure why, I just think they rock, and on these figures they look even cooler. They definitely still maintain their leadership roles, yet still have a cool, newer image that really brings some depth to the characters. I think once I can do some quick head swaps, these figures will completely rock to me, although I may still use their older versions from time to time. 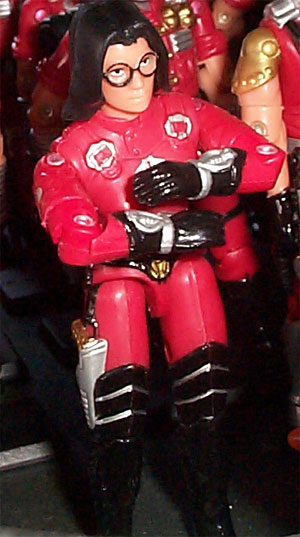 Next, we have the infamous Baroness. It looks like Hasbro finally got the copyright back, and it's none too soon, as she fits the perfect role here. In all of G.I. Joe history, The Baroness has always been a power hungry woman, and her role matches that perfectly here. Her filecard really shows her true colors and makes her out to be the menace that she should be, and I have a new respect for her as a credible villain.

Her colors suit her particularly well, too. Although she's always been depicted in darker colors like Black and Deep Blue, this lighter red is a sharp shade and I think it looks fantastic on The Baroness. As always, the silver Cobra symbol is extremely cool, and she has THREE of them, one on the chest, and one on each shoulder. This shows her as the real leader of the Crimson Strike Team, which is as it should be. She is the CST Commander, while the twins are the squad leaders, each one commanding their respective troops.

Her jet black hair and high boots contrast fantastically with the red shade of her uniform, and the overall package is very, very nicely done. The crimson shade is also very nicely done. While brighter than the original Crimson Guard and certainly brighter than the Crimson Guard Immortal, it is still a great shade of red, menacing, and yet pleasantly bright at the same time.

This definitely brings the menacing evil back into The Baroness that really shouldn't have left in the first place, and I can see this whole Crimson thing as a great three-way inner conflict within the Cobra organization.

But really, what is a Cobra team like this without it's venerable troopers? I would definitely have to say the drawing point of this set was the fact that in one fell swoop, you were guaranteed 12 Troopers. With one swipe of the credit card, you had an instant pseudo-army. Combine that with the fact that you could purchase a second set for considerably less money, and BAM! All of a sudden, there are 24 Crimson Cobra Vipers at your beck and call. So were these red-hued Cobra instruments of destruction all they were cracked up to be?

I say definitely. While I will always be partial to blue on a Cobra Viper (and cannot WAIT to see the Wave 2 Vipers!!) I think the red hue really shows these guys off. They go from faceless Cobra minions to dangerous infiltrators in no time flat, and immediately have a sense of regalness about them. These guys are the personal troopers of Cobra high brass, and no matter what, you don't mess with them.

The red again, is a little on the bright side, but still very nice and subdued. Match that with the silver highlights on the vest, Cobra Sigil, faceplate and gloves, and this figure just shines. Yet still, Hasbro took it upon themselves to add the right touches of black and gold in just the right places and you end up with a fantastic edition to the Cobra Force. Heck, you end up with 2 dozen of 'em! :)

The paint apps seem very nicely done on these figures, even better than the regular line, and the filecards are MILES beyond the stuff on the backs of the store-bought packages.

The very notion that these top secret Cobra Troops must be "written off as casualties of war" before joining the Crimson Strike Team is just way too cool for words. It adds a whole new dimension to these figures.

Not only that, but the weapons are out of this world as well. They keep their traditional Viper backpack, and get Red Star's very capable AK-47 w/ scope, a great Cobra weapon and a nice one to feature with these figures. As a matter of fact, every weapon included with the Crimson Strike Team is a nice one…Hasbro went above and beyond here.

Makes you kind of wonder what's up with some of those new figures…if Hasbro is capable of this kind of quality, why have we gotten poorly written filecards, seemingly sloppy paint jobs and odd accessory choices over the past few months? I'm really not sure, but seeing this set makes me optimistic about the future, that's for sure. It's evident to me that this may be a sign of good things to come.

It's just a shame that these great figures and this great set couldn't be more widely accessible. It's an expensive set (I paid nearly $300 for my two sets) and while it only breaks down to about $10 a figure, it's still a lot of money to sink into something all at once. I had to go on an eBay selling spree before I could even THINK about it!

But I think the real shame is that some really hardcore Joe collectors may end up without this set because the price tag is a little scary. It's too bad that more people won't be able to enjoy this, it's really a nice piece. I only hope that Hasbro wakes up to the whole Army Building phenomenon and starts either releasing more Army Building sets or starts packing more trooper packs in a case…maybe the success of this set will show them the error of their ways…

Meanwhile, here are some more pictures to whet your appetite: 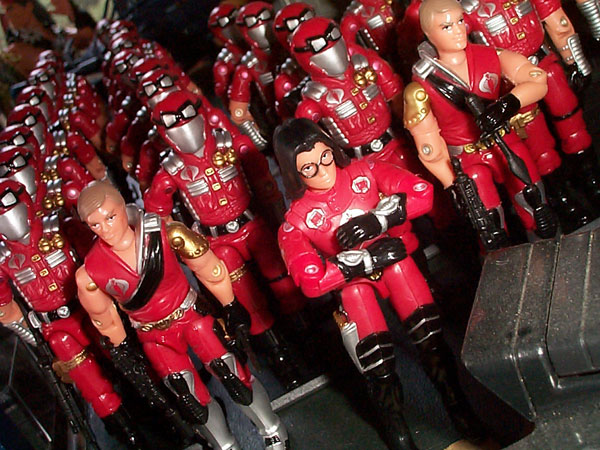 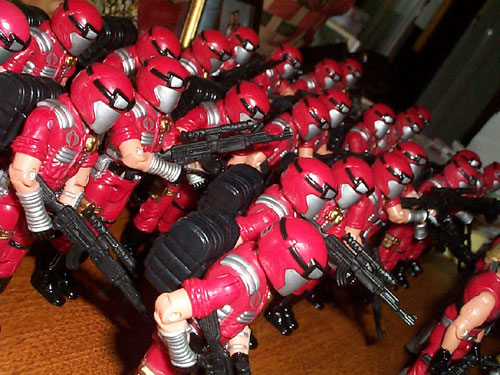 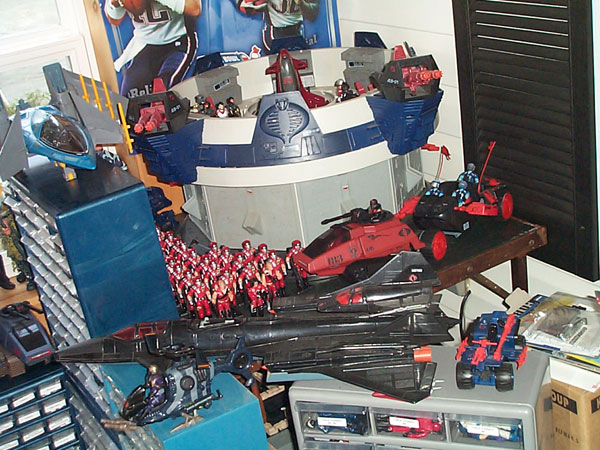 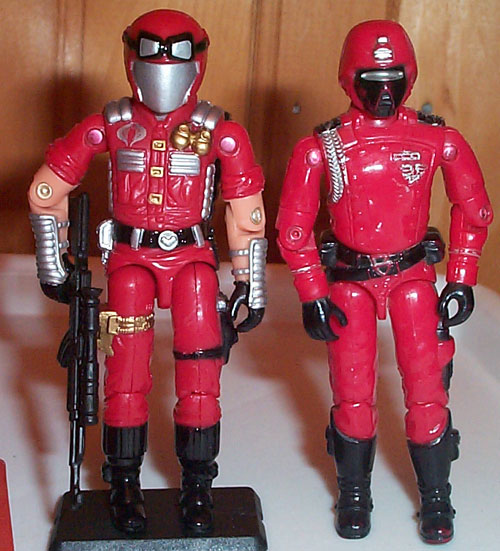 Back to the GvC Exclusives