You'd think in the current "know everything" internet climate that there would be very few surprises in the collecting world when it comes to DTC releases. You'd think that we'd know everything ahead of time and would have dug up all information humanly possible weeks before new product just seemingly appears out of thin air. And for the most part, we do. Collectors' conventions, Toy Fairs, eBay auctions, and infamous "insider information" all provide glimpses behind the scenes and usually give us a really good idea at upcoming releases...enough so that we're all usually griping if new toys aren't showing up as quickly as anticipated.

So when we saw the Ice Sabre listed on Hasbro Toy Shop, no one was really especially surprised...and since it was a great vehicle and one that had been somewhat hard to find in the past, quite a few people ordered it. Then it started arriving in a DTC box...and the paint apps were different! What we had here was a new DTC release vehicle that no one had known about. How did that happen?!

Well, it doesn't really matter how it happened, I for one am kind of happy to see surprises here and there. Of course the mad rush for this new deco Ice Sabre drove stock out of HTS quicker than the blink of an eye and lots of folks (myself included) were somewhat dismayed that they had missed their chance. The chance returned, and as luck would have it, Hasbro was running a special discount at the time...w00t!

So, I added a new Ice Sabre to my ranks, and to be honest as cool as the original one was, this one tops it in pretty much every way. It has all of the great points of the original, none of the drawbacks, and I highly recommend you try to pick one up.

It continues to amaze me that this is the same Hasbro that was producing vehicles for the first two or so years of the new sculpt life. The first offerings we received in the vehicle arena left a whole lot to be desired, but you could almost see a solid progression with every year's releases. Eventually, in 2005, Hasbro seemed to reach the pinnacle of their vehicle sculpting ability with absolutely flawless designs like the R.H.I.N.O., H.I.S.S., and R.O.C.C. While the original Ice Sabre came a year before, in 2004, it was absolutely ahead of its time and gave us some insight in what was to come.

First of all, the vehicle is sleek and angular both at the same time...something that not many vehicles are, especially the new sculpt stuff. Its front is slightly sloped and rounded, giving it a very fast appearence...the minute you look at it, you can immediately get a sense that this thing is capable of just humming along the frozen tundra, kicking up dirt and snow, speeding right along. It just looks FAST. However, speed means nothing without armor to go along with it, and once you get past the thin cockpit, you immediately feel like there's some solid bulk to the vehicle as well, and that it'll take more than a lucky shot to take it out of the fight.

The rear of the Ice Sabre continues the sloping, but it evens out into a narrow streak, but the design of the armor plating near the rear of the vehicle breaks up the mold a little bit and makes it feel like it can take some hits.

Weapons are also nicely applied and nicely sculpted here as well, and I am very happy to report that Hasbro must have retooled the front machine gun somehow, because it is MUCH harder to get out of it's mount. On the first Ice Sabre, after playing with it for a little bit, the mount got kind of loose...on this new one, I've put it through some paces already, and so far, so good. 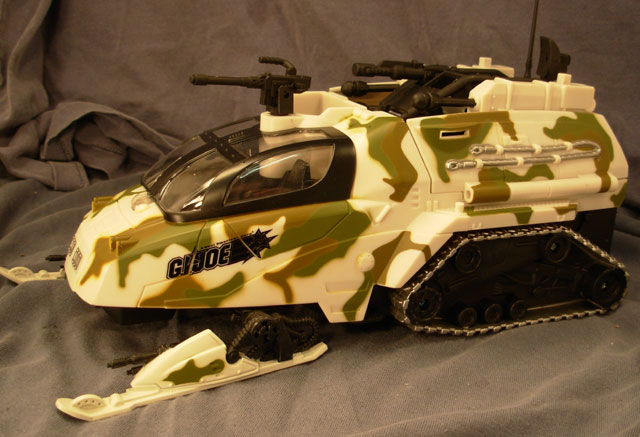 Just like the original Ice Sabre, the missile launcher pops out of the rear of the vehicle to give it some instant punch. It slides in smoothly and looks great when it's not deployed, adding to the Ice Sabre's quickness, but when needed, it pops up fluidly and has the very cool cage gunnest system intact. One minor complaint is that it seems like the rear doors are a little looser on this model than my first one...sometimes if you bump the Ice Sabre the wrong way, the doors pop down, but it might just be my toy, and I think it will be easy to remedy.

Of course the main draw to this new Ice Sabre is the paint differences. Instead of your pretty standard white and gray camouflage, Hasbro has added a wealth of green and black to this new version, giving it a very cool new design. It's a lot more colorful than the original, which makes me very happy, and even though it may be a little less strict arctic in deco, the increase of color just makes the vehicle look better.

All playability is intact with this new version as well, with the spring-loaded rear missile launcher, the easy-access gun turret, fully movable front ski's, and even the hidden rear hatch (and slide-out side peg for passengers to ride). There's a lot of overt play features and hidden gems in this vehicle, and it's just plain fun to own and fool with. 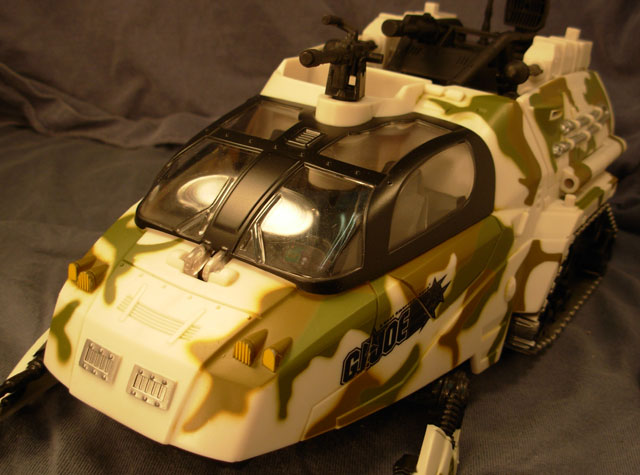 Frostbite is also changed pretty nicely from previous versions. He is definitely much improved from the original Ice Sabre driver (who was mostly off white and light blue) but is still not quite as cool as the Frostbite we got in Wave 6 Valor. Vs. Venom. The proportions are pretty decent with this figure, although he looks somewhat short, and the sculpting is top knotch. From the great hat/goggles/facemask to the intricately sculpted fur-lined collar, all the way to the almost comic-book like tunic design, this figure has a lot of sculpting intricacies and is a pretty exciting figure to look at and use.

His elbow joints are almost like the ones you get with the BTR figures, but have a great range of motion, and the padding throughout the figure is effective and welcome. His colors strike a similar balance as the vehicle itself does, with a mostly white base with touches of dark green and black. The driver does indeed match the vehicle in this particular case, and the largely increased color pallet on both ends up being very nicely applied. If you had a hard time getting Wave 6, like a lot of people did, this version of the figure is a great one to get instead of the other one...it's not quite as cool, but it's much better than the previous version that came with the original Ice Sabre. 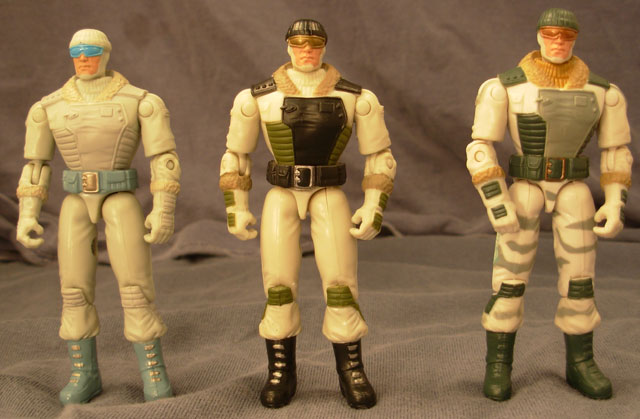 At the core, this vehicle is still an arctic vehicle, which limits functionality slightly, but it still has a fantastic design and a whole TON of play value. The figure is great, and Hasbro has taken an already near-flawless vehicle and made it even more so. While I got a great deal on this vehicle when I bought it, I can heartily recommend a purchase here, even at full price. This is a great addition to the DTC motor pool, and even as just a repaint, is really worth picking up. 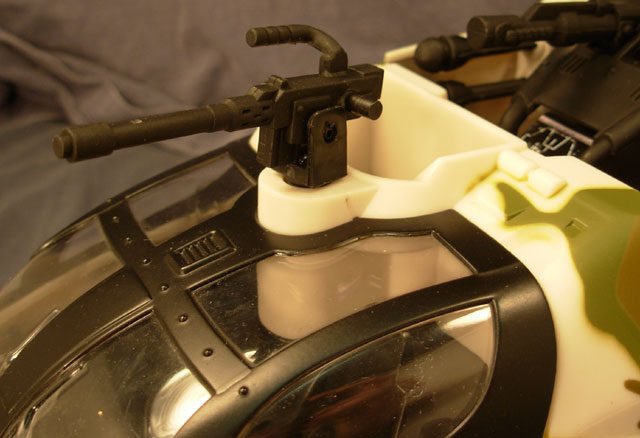 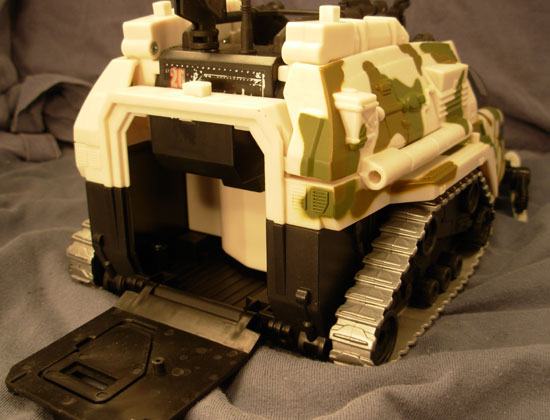 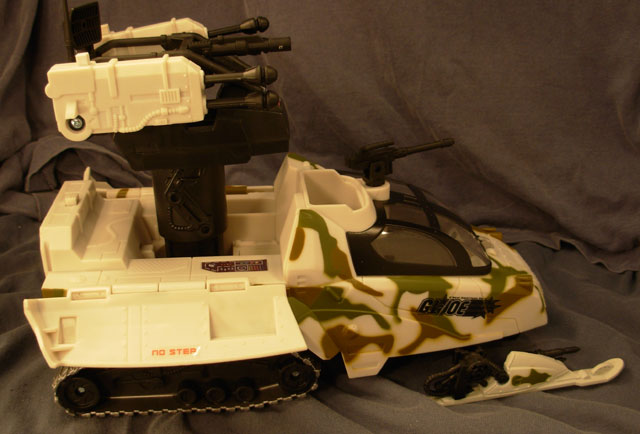 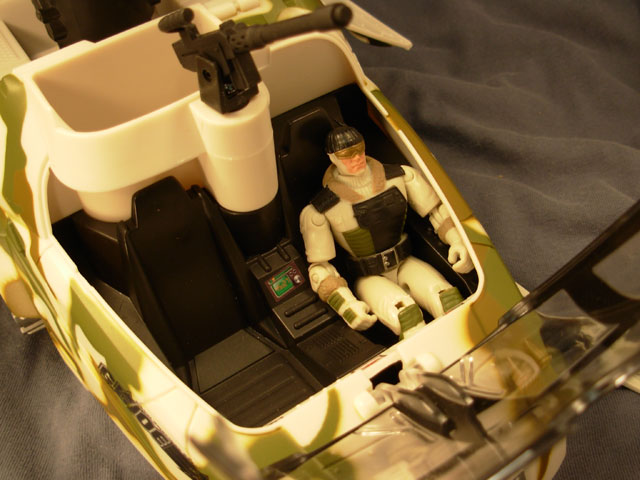 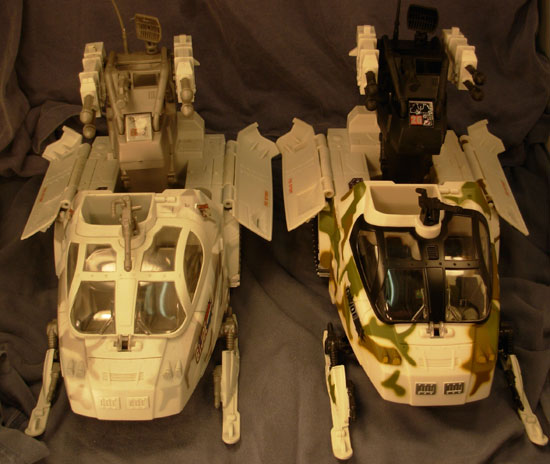 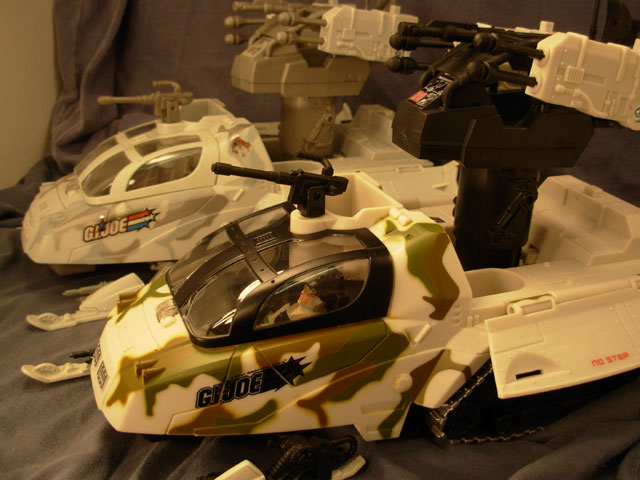 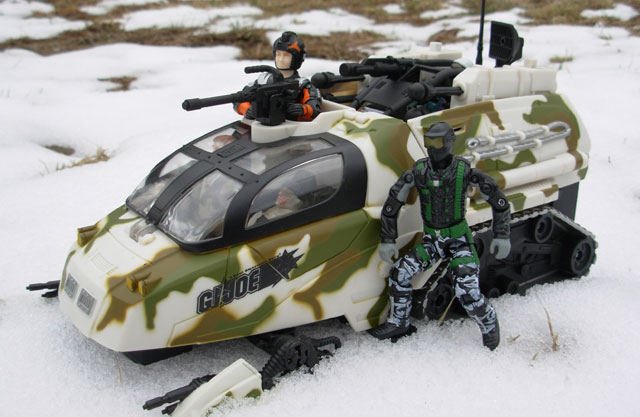 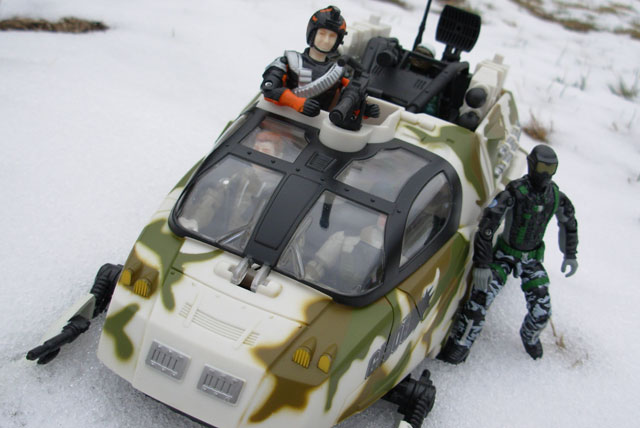 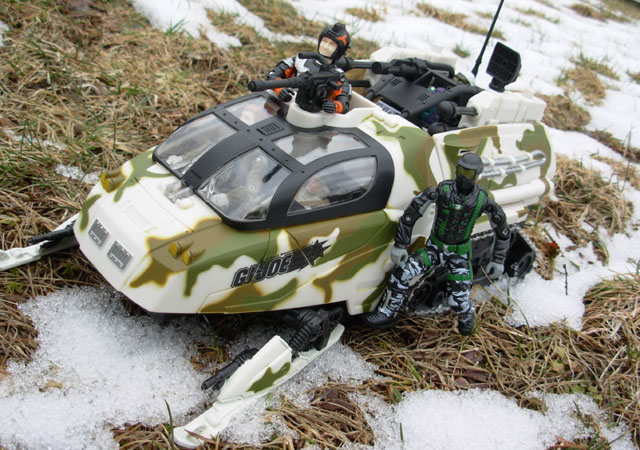