Every year the G.I. Joe Collectors' Club offers up a free figure to everyone who is a current member as of the February/March cut off date. The figures to this point have been new sculpt repaints, and were somewhat of a mixed bag, in my opinion.

While the clear Zartan was a neat novelty, he didn't seem all that useful...and as cool as it was to finally get a "Jungle Viper" figure, I wasn't sure how wild I was about the parts chosen to put it together. It was neat enough, just nothing amazing.

And as mixed as the first two figures were, the minute I saw Nullifier I thought he would be the worst of the bunch. Well, thankfully, my initial reaction was off base, and now that I have the figure I have a better appreciation for it. Considering the original Nullifier is one of my favorite figures of the line, though, this guy has large shoes to fill, and doesn't quite do it.

The origin of the figure's sculpt here is mainly with the Spy Troops Wave 8 Heavy Duty. That's where the legs and arms come from, and the choice of that mold makes some sort of sense because he came with Nullifier Spy Troops armor, which left the arms and legs exposed...so at least in some form he would fit in here.

The only issue is that this was during a period of time when legs were being sculpted four feet long, and torsos were being sculpted at about half a normal person's size. So here you get some real long legs, some big clunky boots, and a little tiny chest/stomach. The torso sculpt is from the Valor Vs. Venom Zartan, which also has these proportion troubles. While that works here because it mixes with the rest of the parts well, the result is a pretty freakish looking figure, all around. But even though he looks abnormally large, that almost fits, considering the Nullifier has always been presented as a pretty massive Iron Grenadier support force.

But beyond the proportion problems, the figure sculpt itself is actually pretty neat. The mixed cloth and padding of the legs is quite effective and gives a nice layered look, something the Nullifier has had as one of his trademarks. Armored gold gauntlets add some bulk and defense to the figure, and the Zartan torso has a terrific looking chest pad. It's slim and form-fitting, but has a very cool angular design and is really striking.

Of course you can't talk about the sculpt without talking about the fantastic Devils' Due style COBRA trooper ridged face mask. They could use this head sculpt for every enemy trooper and I wouldn't complain. It's flat out perfect. You end up, even with some proportion problems, with a figure that is nicely stylized, large and beefy, and quite imposing.

This is where the figure really, really shines. The old Iron Grenadiers seemed somewhat patchwork...there weren't many unifying features about them. Some of them were black and gold, some were orange and purple, and you had the Nullifiers which were tan with pink highlights. It seemed pretty random (almost like the wide range of colors on the regular COBRA troops of the time). But now, it seems as if the Collectors' Club is taking pains to match this current crop of IG's with very similar paint schemes, and very cool ones at that. The colors of the Nullifier match PERFECTLY with the rest of the IG's from last year's Convention set. I mean perfectly. 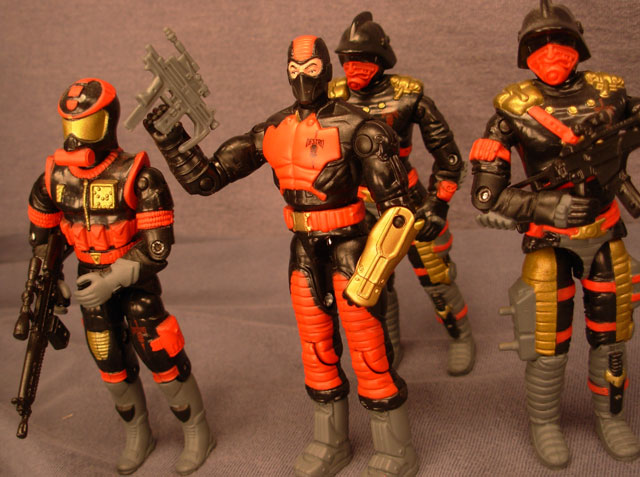 As you can see, color-wise, the figure fits right in with the others. From the gray to the red and gold, the Collectors' Club used the exact same color pallet, and it really, really works. It actually almost saves this figure completely. It takes what could have been a somewhat goofy mold and really turns the figure nice with a terrifically applied paint scheme. Add to that the great paint apps on the armor, and the Destro symbol on the chest, and the figure is rounded off perfectly.

It's not often that you can say accessories almost ruin a figure...but this is almost one of those times. The only thing that saves the armor here is the fact that you can remove it. In fact, the figure first being shown only with armor I think might have cost some memberships to be brutally honest. I HATED the look of the figure originally. That armor is blocky, immobile, and downright ugly, and I was pretty afraid that the figure underneath would just be Heavy Duty. Thankfully the Club mixed things up a little bit, and you end up with a decent figure, but it was scary there for a minute. That chest armor is just bad. It looks pretty imposing, truthfully...very large, bulky shoulder pads...but the fact that his arms can barely move when he's wearing it, just takes too much away. 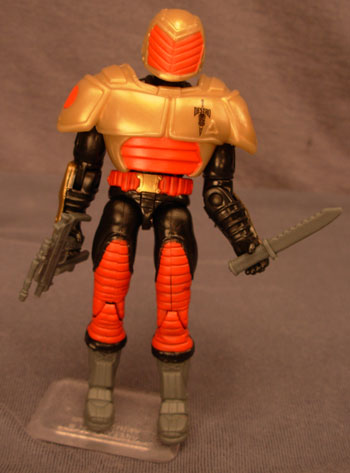 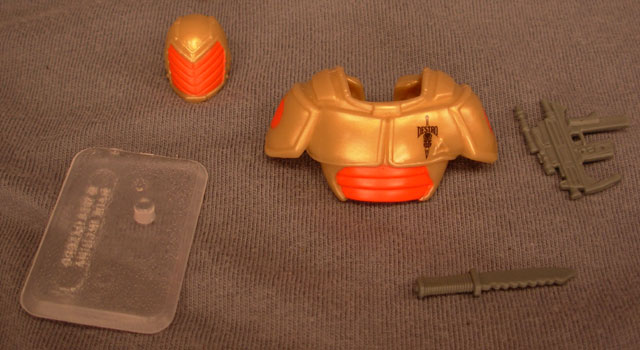 Fortunately the helmet is actually pretty cool. It is somewhat reminiscent of the original Nullifier, but streamlined nicely. The helmet is almost a tad too large on the head, but not so much that you'd notice, you can just tell it doesn't slide down and stick. It seems to stay relatively stable, though, so I cannot complain too much. The machine pistol, knife, and battle stand are all nice compliments, so really I can't complain about the accessories TOO much. The armor itself almost ruined it for me, but the rest of them are really pretty nice.

Not too bad at all. I started out hating the figure when I saw it all geared up in the first pictures, but once I saw that the torso and head sculpt were different, it added a LOT to the figure. It's not often that I like a figure much more without his accessories than I do WITH them, but Nullifier gets that dubious honor.

I would have preferred some sort of classic sculpt figure, just so it would fit in with the other IG's a little bit better, but besides that and some minor proportion issues, I really find myself liking this figure quite a bit. He makes for a decent addition to the Grenadier ranks, and if cost were not an obstacle, I'd probably buy a few of them. I'm only going to equip mine with his helmet (no chest armor) and gun, and in that combination it's very cool. I was pretty surprised to see that even with his armor the figure fits in the AGP nicely, if you take that armor off, he looks even better.

A nice figure, when all is said and done. Considering the price you pay if you're a member (which is zero) he's a very cool figure to score. I can't say I heartily recommend dropping twenty-five bones on extras...I don't think he's worth that. But for members who got one for free, he's terrific, and if the club starts closing him out at a cheaper price, I think you should jump on it. He is without a doubt the best free promo figure the Club has come up with yet. A world better than Zartan, and yeah, a lot better than the Jungle Viper as well.

EDIT - Of course Lance Spudnick, as observant as he is, pointed out that I completely forgot about the Glow in the Dark Heavy Water! Zoinks. I actually really love that figure, too, so he's probably a dead even tie with this one for my favorite MC promo figure so far... 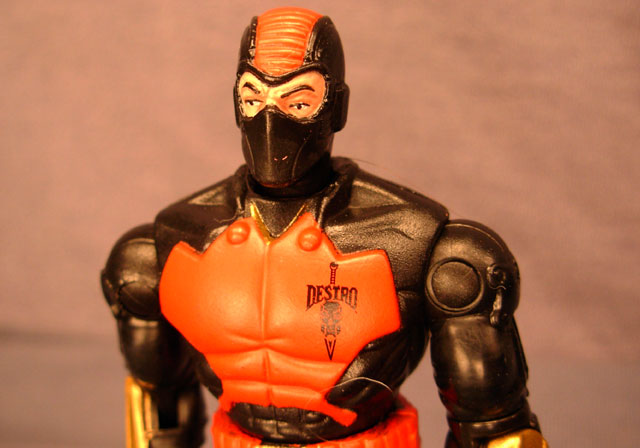 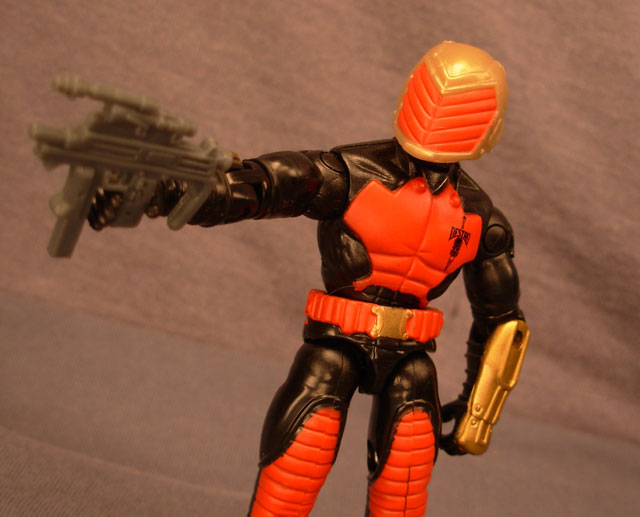 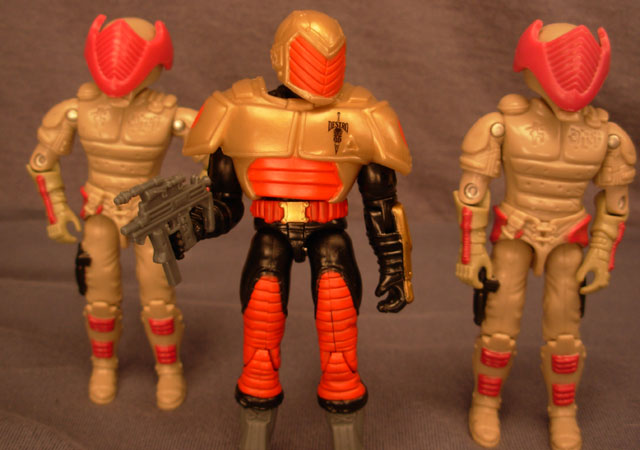 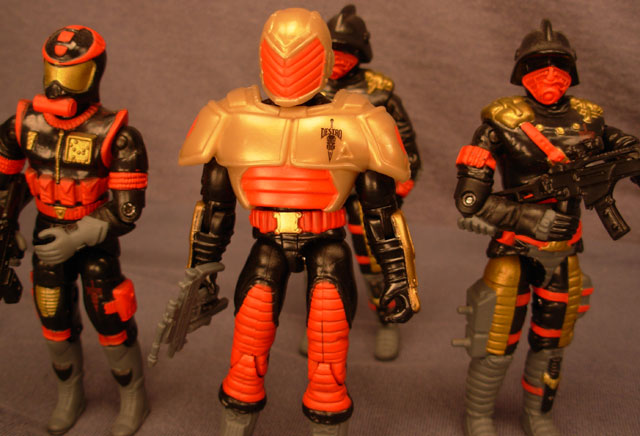 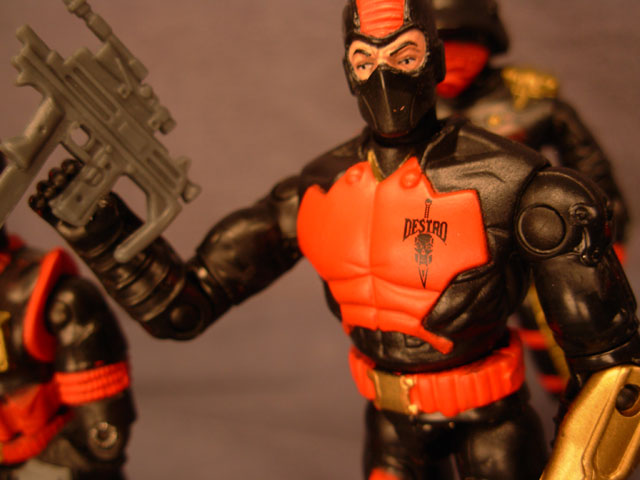 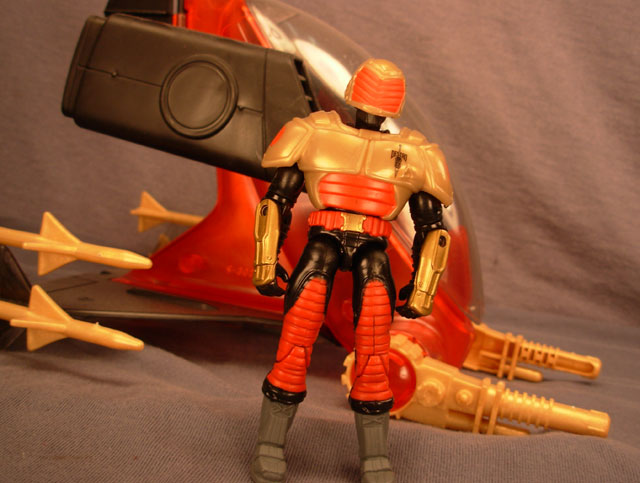 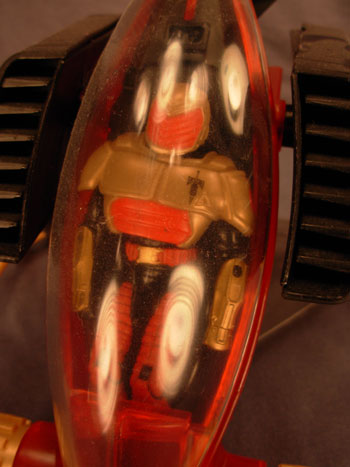 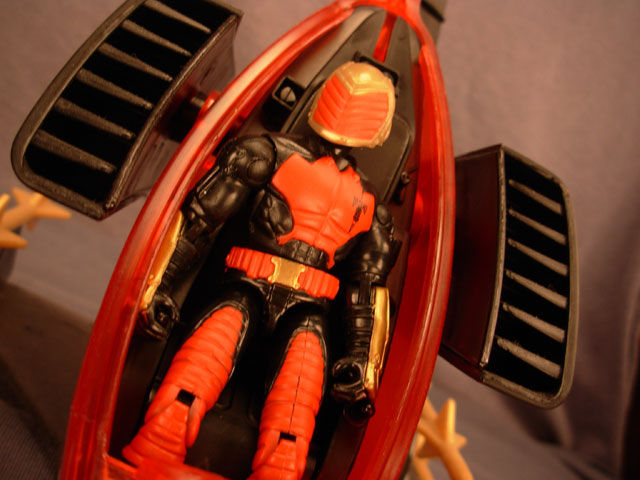 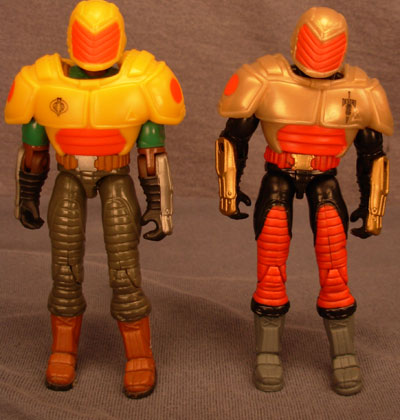 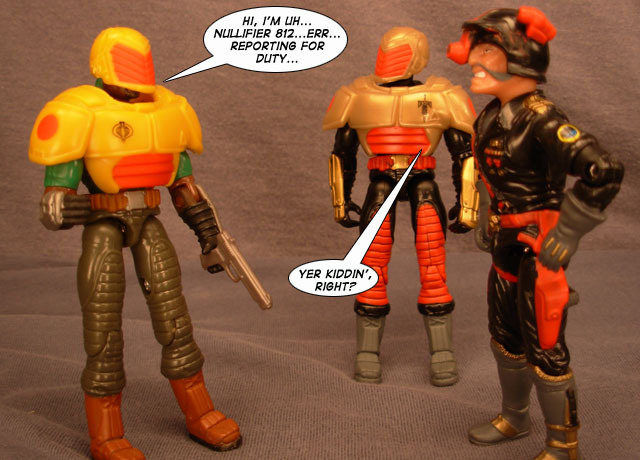