Some strange things have happened to certain figures over the years, production-wise. As we got more and more classic sculpt re-issues, tight o-rings, mold creases, mold flashing, and parts mixing caused all sorts of strange side effects to once reliable figures known for their versatility. Alley-Viper legs would spontaneously fly out and kick the guy next to them...some heads wouldn't retain their full range of motion (or even be able to move side-to-side). Just some quirky things that make Joe figures just a little less fun to pose and play with.

Here are my thoughts.

Hasbro has been wildly inconsistent with their 6-Packs over the years, going from absolutely incredible offerings like the Python Patrol, to completely mind-numbing selections like the Heavy Assault Squad. Since the line moved to DTC, it seems as if Hasbro has a completely different team working on the 6-Packs, and it really shows. Quality is pretty steady, and most importantly they have these great themes and storylines that come alive through the presentation of the pack. The Night Watch, B.A.T. Attack, Viper Lockdown, and Plague Trooper/Steel Brigade sets all had some real personality to them, and that goes a loooong way in my opinion to making a successful toyline.

The Viper Pit tries to continue this tradition, by introducing the mysterious "Viper Pit" training center. The storyline isn't as captivating as some previous ones, but Hasbro doesn't need to focus on that. This set is made purely on the troop builder concept, so I at least admire the fact that Hasbro at least continues the story theory on a set that really doesn't need it. 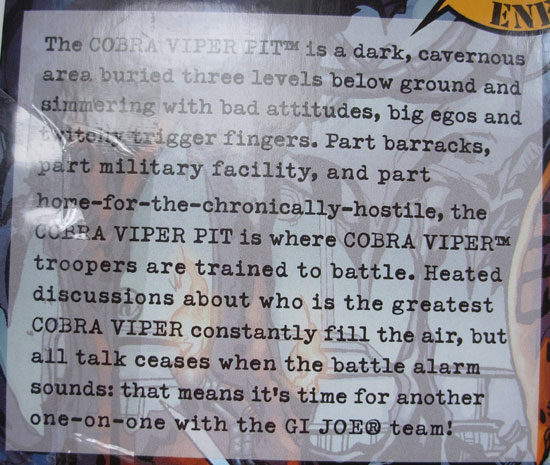 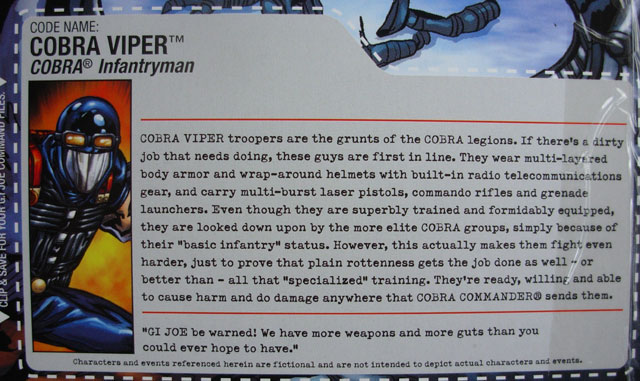 The figure layout in this set is pretty straight forward. Six Viper figures...one has a more copper-colored faceplate mask, the other five are all silver. I'm not real sure if the copper color is meant to signify some kind of leadership role or not, the package does not say specifically, which is actually kind of nice, since it leaves it up to the individual. This copper color was used on several facemasks throughout the new Viper releases in the past few years, so it helps integrate this set with those others.

Right off the bat, you can see what Hasbro's goal is with this set. A 6-Pack of Vipers designed to be as close to the originals as possible, without being exact duplicates. They are somewhat successful, but not entirely. 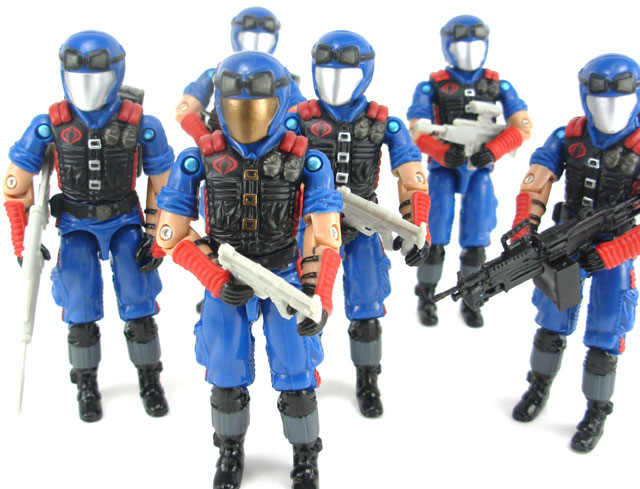 First of all, the Viper sculpt has become one of the most famous and desirable sculpts in the entire line, and these troopers are the focal point of many collections. From a design standpoint, Hasbro does a pretty darn nice job of immitating the overall look of the Vipers, with the same old head, torso, and arms as they've had access to since 1997. It is nice to see that Hasbro went to some great lengths to either locate the upper legs, or retool the upper legs so that the Viper doesn't simply use the same old B.A.T. waist and legs that they've used for 9 years. However, the result ends up a little mixed.

As I've said, from a design standpoint, these figures look fantastic...they blend in nearly perfectly with the classics. But from an actual production standpoint, there is something left to be desired.

First of all, the Viper upper legs look fantastic! But they are even larger than the B.A.T. legs, and end up fitting VERY snugly into the waist. Combine that with a slightly overtight o-ring, and the legs lose some range of motion, which is unfortunate. It's not a total loss, since you can still force the legs into realistic positions, but it is considerably harder, and it's very tricky to get them to hold that pose. For someone like me, who really uses these figures in a "posing" environment, this can hurt my love for a set.

Also, these Vipers retain the same neck-joint problems that they've had since '97 as well. Damage in either the neckball itself, or the neckhole in the torso, means that the head is perpetually "drooping". There is some sort of tab and retooled neckball that really affect how the head can be posed, and while the problem is fixable, it takes some serious dremel work, which is kind of disappointing. I would almost rather Hasbro put the money into retooling the neck/head, and just gave us the same old B.A.T. legs rather than give us new upper legs and push forward the same old "droopy head" problem all past Vipers since the 90's have had.

So, from a sculpt standpoint, these new Vipers LOOK great...but they really don't PLAY great. This might not be an issue for many of you, but it is for me. 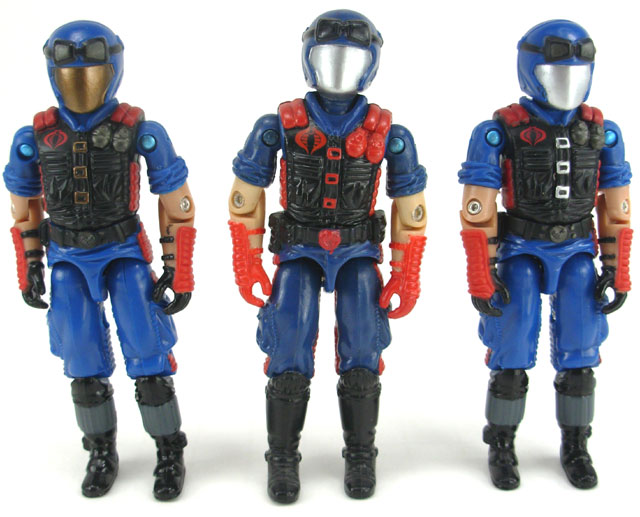 From a paint applications point of view, though, without a doubt this set is actually BETTER than what we got back in 1986 if that's even possible. Hasbro goes through great effort to make the figure as close as possible to the original paint-wise, but they make some very nice improvements. The mixture of red and black on his forearm pads/gloves is a GREAT improvement over the flat wash of red on the original. A nice metallic shade also makes the goggles and grenades 100% more realistic and fun. Instead of red buckles, we have silver here, and even the belt buckle looks more real.

I'm not sold on the gray striping around the legs personally...that does seem like an odd decision.

The blue color is a touch lighter on the new guys than the classic, but not enough to be obvious, and the figures blend in remarkably well with the classic version. Big kudos to Hasbro for using the '86 version to perfection, but making just the right adjustments to make this new version better, and more appealing to the eye.

Another little negative point against this set also has to be the accessories. I can kind of appreciate what Hasbro is trying to do here, but quite honestly they really miss the boat. 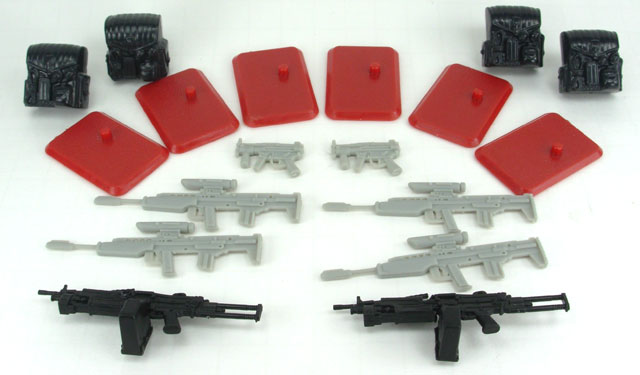 First of all, Hasbro is obviously using the colors of the original weapon as template for the colors on these, and it really doesn't work. The gray matches nicely, but I personally cannot STAND the Ambush rifle. The thin barrel seems constantly bent, the weapon design is boring, and the gray color just makes it look unrealistic. I do really like the MP-5, but it doesn't suit the Vipers well, and again, the gray color doesn't really work for me. I do like the two SAW's packaged with the set...it does make sense for a Viper squad to have a couple of heavy machine gunners. The four backpacks match the old Viper packs to a certain degree, and I don't have many complaints on those. I'm not really sure where Hasbro is going with the red battle stands, but they look fine, no major complaints there either.

All in all, the accessories really leave me cold. If Hasbro had only gone with one of their typical AK-47 sculpts or some other more basic machine guns, I think folks would be a lot happier. As it is, I will likely be visiting Marauder, Inc. to equip my Vipers. Anyone who has some ideas about weapons for these guys should definitely hit the Marauder site and drop John a line, too. He's going to be producing a "Save the Viper Pit" weapons pack and is looking for some input on weapon selection! Let him know what you want to see, and you could get some free sets out of it! 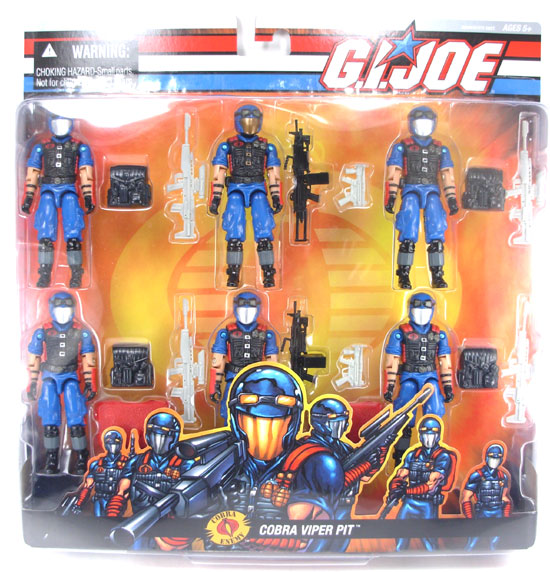 From an actual design standpoint, I can definitely see where Hasbro is going and what their goals were, and honestly, I think it will be met positively by a bunch of fans out there who want to build their armies cheaply.

However, I'm much more about new concepts, new stories, and interesting new characters, and the Viper Pit set provides none of that. Seeing a 6-Pack of Vipers that look nearly identical to the ones I've owned for twenty years holds very little appeal to me (at least the COBRA Infantry troopers were improved in many ways sculpt-wise) and I don't see myself buying many of this 6-Pack at all. I know fans are always clamoring for more ways to build their armies, so this will end up being a very desirable piece for almost all of you, just don't count me in on that list.

Combine the twenty-year old concept with the substandard tooling production problems, and I unfortunately can't find a whole lot to get real giddy about with this six-pack. I can completely understand people who are happy with it, and who will flock to it, I'm just not one of them. G.I. Joe captivated me in my younger years because it regularly introduced new characters, new story elements, and new concepts, which made the line continually interesting for decades to come. I think part of the problem with recent releases has been a glut of rehashed figures and product which only serve to re-visit the past instead of create new ideas for the future. If G.I. Joe as a concept is going to survive, it needs to become more than a simple nostalgia trip...more than a simple resculpting of the same old vintage figures ad infinitum, and it needs to start breaking new ground again. Will the 25th anniversary line do that? Only time will tell, I certainly hope so.

My personal feelings on this set from a concept standpoint aren't real positive, but I know Hasbro is catering to the fan majority, who want to stock up on these like canned goods after a nuclear winter...I can understand their points of view as well, it's just tough to get overly excited about a figure I was originally excited about two decades ago. 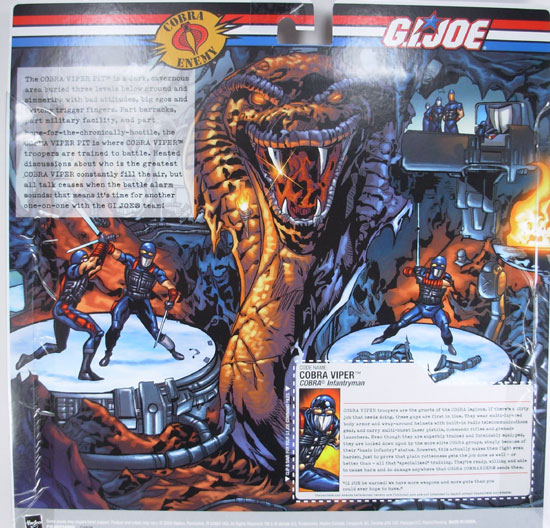 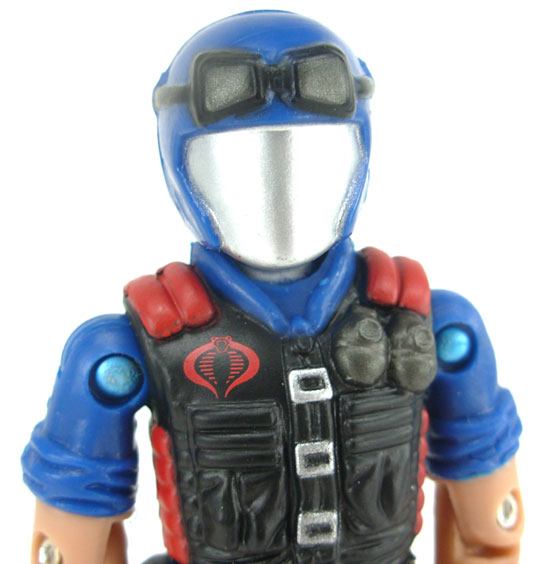 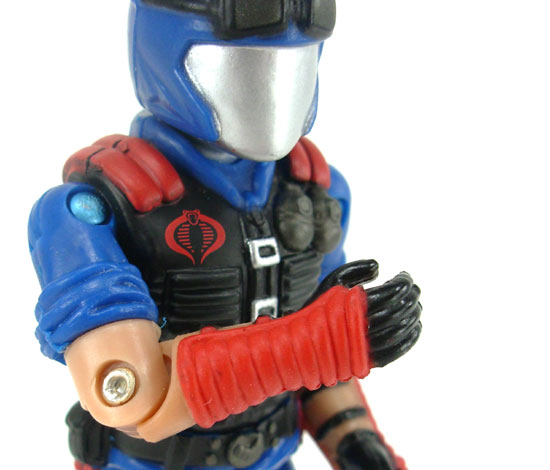 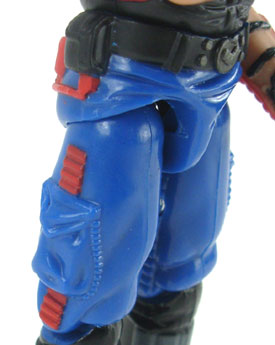 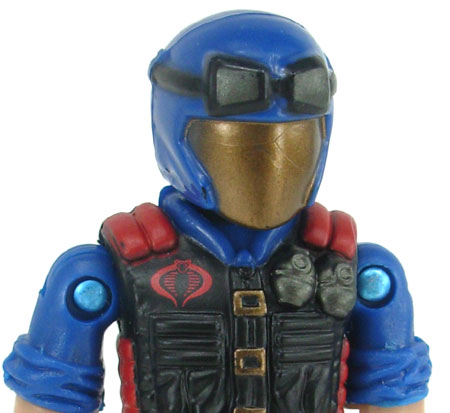 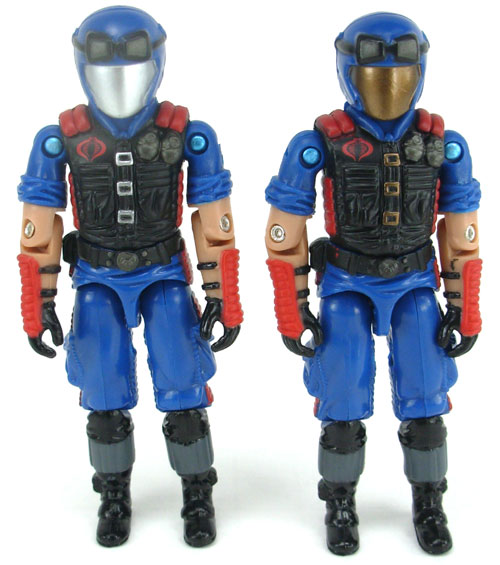 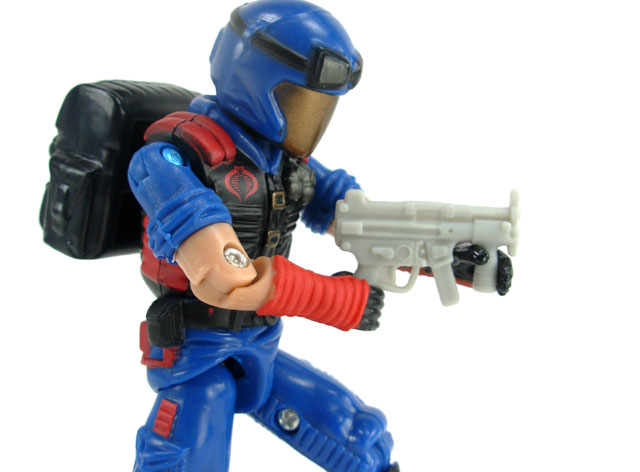 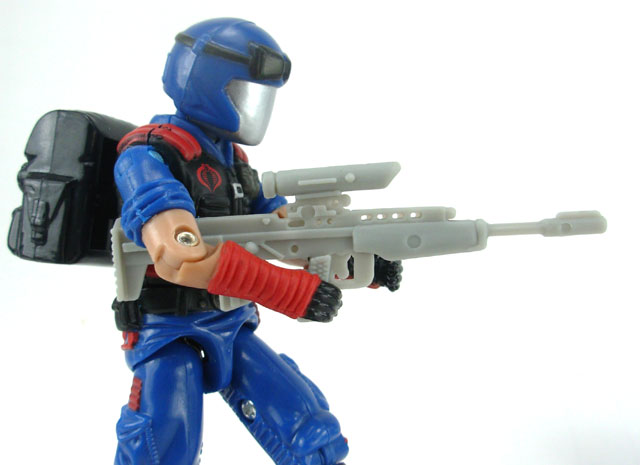 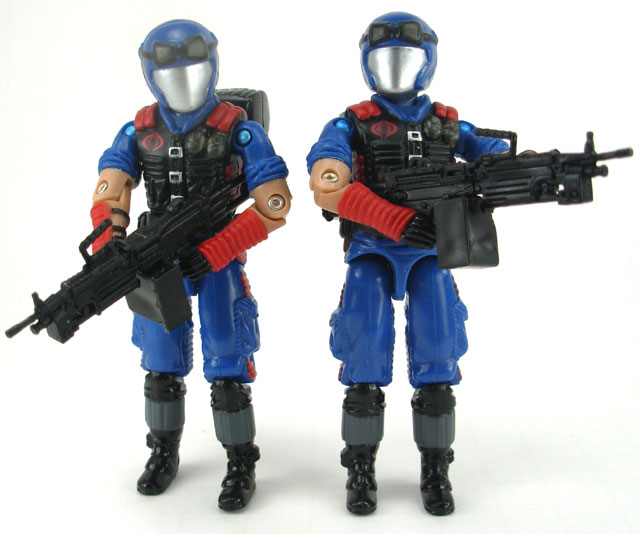 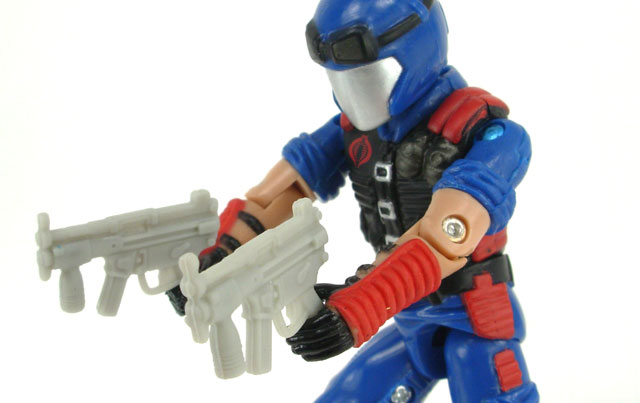 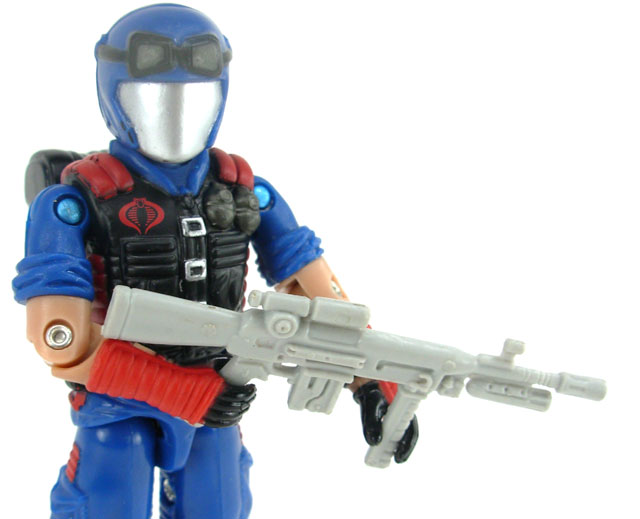 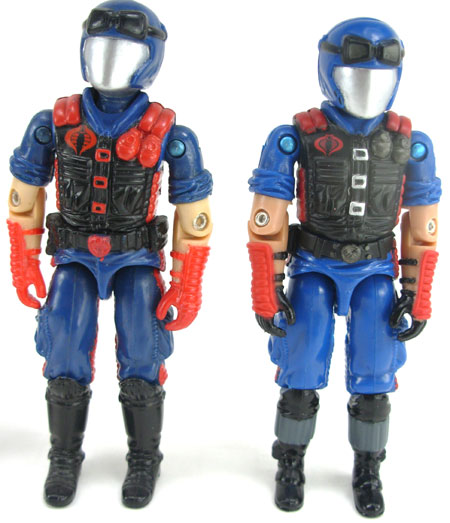 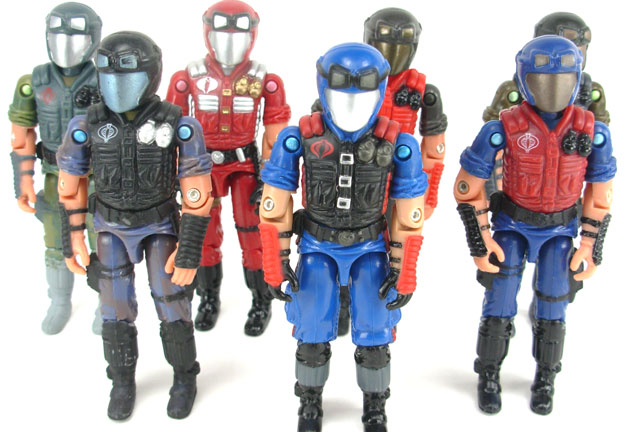 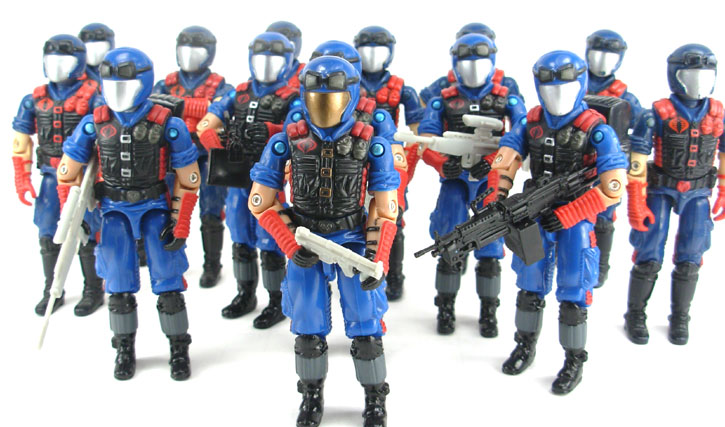 Just see how these guys look with some cool weapons from Marauder, Inc! 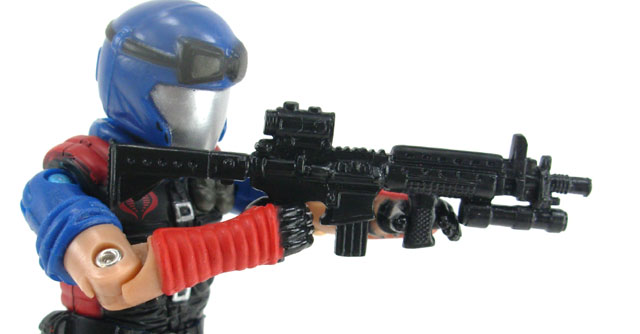 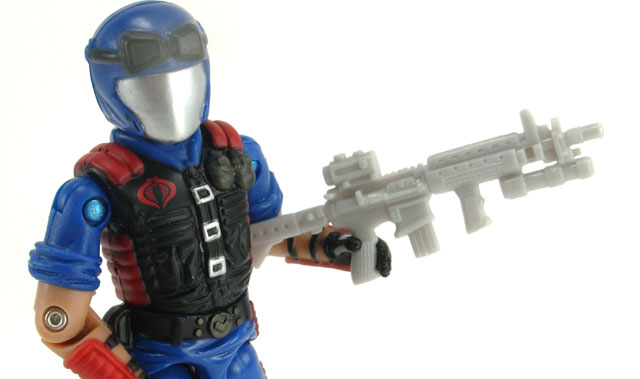 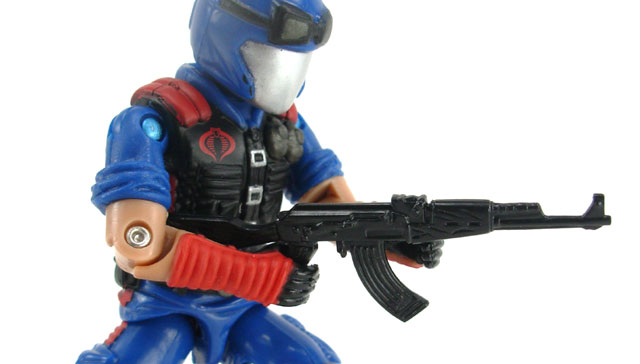 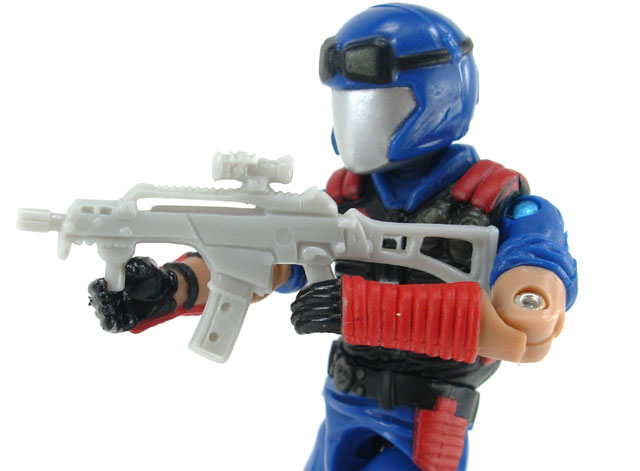 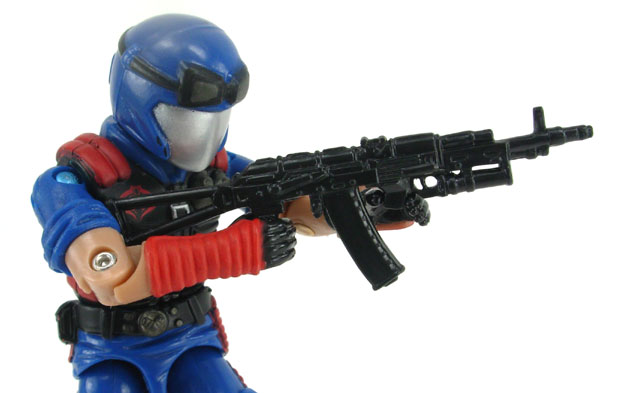 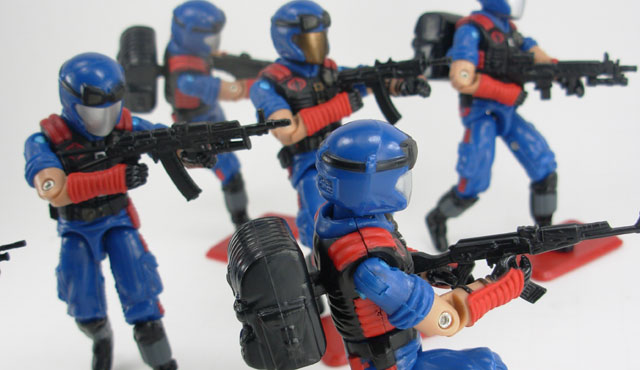