Now, this...THIS is what I like to see! If there has been something somewhat lacking in Hasbro's recent releases it's that little thing called creativity...but this set is creative! It uses recycled parts as per Hasbro's DTC business plan, but they really turn it up and add some great paint decos and some modified heads to really make some new stuff happen. Not only that, but they come up with a pretty cool story to add some depth to the set as well.

With some meager paint changes to Stalker, and a few minor changes to Bombstrike, you have two completely new looking renditions of some familiar (and welcome) characters in the Joe mythos. Not to mention the minor alterations they make to a DTC Crimson Guard to bring to life one of my favorite old school obscure COBRA characters. Throw a trio of some of the coolest new sculpt army builders, and you have yourself a great little 6-pack. Best one I've seen in a looong time, in fact. 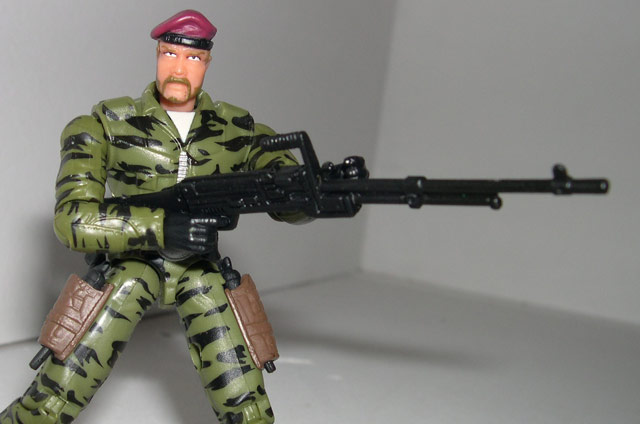 First lets look at G.I. Joe himself, Joe Colton. The "original G.I. Joe" was first available in 3 3/4" form in '94 as a mail in offer teamed up with a 12" version of the same character. The overall concept was that Joe Colton was the original 12" figure, and had a hand in creating the G.I. Joe team back in the 80's. This figure is a frankenstein from head to toe, using the Valor Vs. Venom Stalker's head, VvV Wild Bill's torso, waist, and legs, and the DTC Barrel Roll's arms. These parts all blend together very, VERY well and give you an excellent image of a standard military uniform. The generic pocket shirt, regular non-descript pants and regular looking arms all look like parts of a regular military outfit. A slight change in race to the head sculpt immediately makes this out to be a totally new character, which is great. Giving him a full beard is a nice homage to the original 12" rendition of the figure, and equipping him as an apparent Green Beret is another cool throwback to the original classic 12" line.

The mold happens to be pretty nicely proportioned, too...even though the Valor Vs. Venom Wild Bill does suffer somewhat from the torso/leg problems that some new sculpt figures are notorious for, it doesn't look that bad here. The longer DTC Barrel Roll arms also aid in this perception.

The paint applications here are very nice, too. Nothing especially elaborate, but the base green color with the nicely applied black stripes really go a long way to give a "tiger camouflage" appearence, even if the deco itself isn't really accurate. Just a couple of colors and some design work and it has a very nice impact. The silver zipper and other trimming along with the cool looking brown holsters all work together to give you a pretty realistic looking, nicely painted figure.

His weapons are all right, he comes with a heavy machine gun and Wild Bill's twin pistols, which work pretty well, even though they aren't really your typical Green Beret weapons. Still, it's nice to have pistols that fit into those holsters.

Overall, G.I. Joe Colton looks great and is quite successful, with some nice parts choices and great paint apps. 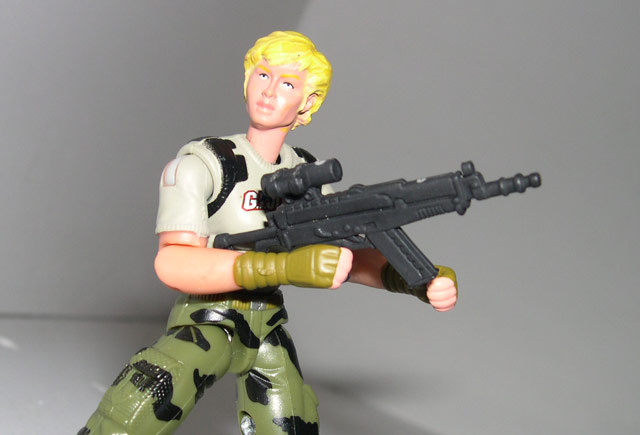 G.I. Jane originally gained notoriety as a 12" figure of a nurse, which ended up being quite rare back in the day. Back in the original Marvel run, Larry Hama integrated the character into the Real American Hero universe as modern day assistant to Joe Colton, and she got the nickname "G.I. Jane" (which was used by folks to refer to the original 12" figure as well). No longer a nurse, but now a research assistant, the two teamed together to create a pretty advanced weapons system for the government, and I really like how Hasbro integrates that into the backstory on this set. This figure seems to fit the character pretty well, too.

Most of this figure is Bombstrike, and there's nothing wrong with that, since it's an impressive female sculpt and makes for a very cool figure. She does have a new head sculpt, though, which is very cool, because it gives her a slightly more aged look and a different appearence than Bombstrike had, and it really works for this character. Her face has a lot of character and it looks great.

The body is a plain t-shirt and pants, which is awesome...looks great. Her shirt is an off-white instead of brown, still with the ever-present G.I. Joe logo on her chest, and her pants are now colored up in a terrific green/black camouflage scheme which nicely matches the colors that her partner G.I. Joe gets. The pattern itself is pretty different, but the similar colors really tie her in well to her male counterpart and make the pair a more cohesive unit overall.

Her weapons are also really cool, considering she isn't really meant to be a soldier as far as I know. She comes with a knife, a black version of Hacker and COBRA Commanders submachine gun (one of my favorite new sculpt weapons) and a small pistol. Jane really fills a nice hole in the Joe history roster, and is a pretty nice figure to boot. 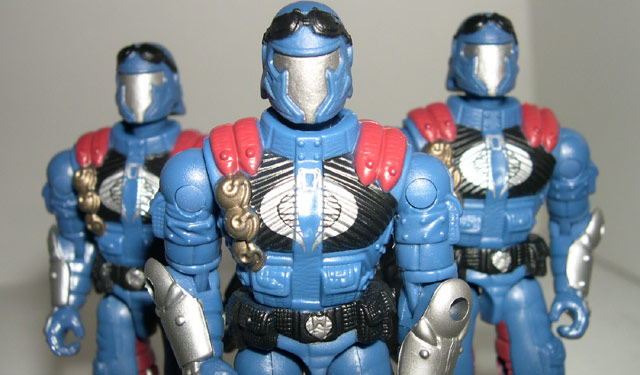 Let's cover the army builders next... I've gone on record as saying the new sculpt Viper mold is one of my all time favorite new sculpt trooper figures. The somewhat futuristic design of the helmet, the awesome integration of padded vest and well equipped uniform...the great way it draws on terrific classic elements and makes them current enough to work now. It really is a very nice figure, slight proportion issues aside. Hasbro takes that great figure and changes it perfectly in this set. They use a very similar blue base uniform color to match the Vipers available in Valor Vs. Venom Wave 7, but they use a darker red color for the pads and use a nice crisp silver for the logo and the forearm guards, indicating that these could be use as a "COBRA Officer" type of Viper, which is a cool homage to the classics.

Now, the Viper's legs are pretty long, and his arms are VERY short, which does take some points off the board for this figure, but still overall, the Viper comes together quite well, and looks great in this new paint scheme.

They also chose to equip the Vipers with some great weapons, the new sculpt AK-47, grenade launcher, and scorpion submachine gun. All of these weapons suit the Vipers well and are great choices for the trio of troop builders in this set. They all really work. 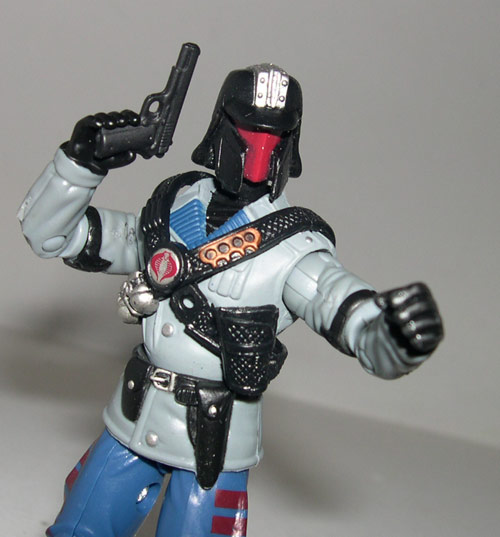 As cool as the rest of these figures are, though, the crowning achievement of this set is without a doubt the new sculpt Interrogator figure. As anyone who reads my dios knows, I am a big fan of the Interrogator, and I've seen several new sculpt customs that did an exceptional job capturing the feel of the character, and it would appear that Hasbro used some of those customs as inspiration in a terrific way. The result is a new sculpt Interrogator that looks pretty different from the original, but still has all of the critical elements that make the character shine, adding just enough modifications to really make this figure awesome. This is exactly what I want Hasbro to do...take cool, obscure characters and really come up with some imaginitive modifications to make cost-friendly updates and make the figure great. Using the CLAWS Commander/Crimson Guard base was a great idea, and even though some of the mold componants make the figure a little less poseable, for Interrogator that works. His European-styled collared jacket, flared pants, jackboots and such all come together to look like the malevolent European interrogator and torture expert that he really is.

But the standard repaint philosophy would not have worked if not for the little mods done to the figure, and those additions make a world of difference. Originally, I could have sworn that Hasbro used the Valor Vs. Venom Viper helmet as a base and just altered it to accomodate the helmeted appearence, but I am glad to see that is not the case. They went all out on this new sculpt head and it looks TERRIFIC!! Very dramatic, very detailed, very angular, with still a lot of homage to the original look of the character, but with a ton of new flair that really makes Interrogator look menacing. I LOVE that cross-chest strapping on the figure, too...it is almost an exact replica of the molded on straps from the original figure, but again is more functional (with a great working holster) and ultimately more detailed. The holster is a little loose, and the small pistol that comes with him doesn't stay in very well, but still, the holster is very cool and the removable straps are a nice touch.

The colors are , of course, based strongly on the colors of the original, and the gray/blue combination with the red squares on the pants and everything all look nice and work well, making this really look like the Interrogator we all know and love. He doesn't come with a wealth of accessories, but what he comes with looks great. First of all, the removable chest strap with working holster, a pistol, and a knife are all understated, but nice weapons and accessories, and they all add up to a great looking figure, who really doesn't need much.

All in all, the 6-packs seem to have come a real long way since we were seeing rehashed classic sculpt stuff with uninspired accessories and questionable character choices in our local Toys "R" Us's. With a nice ongoing storyline, some very unique and interesting character choices and great parts and paint apps, the Viper Lockdown set is one of the best 6 packs to come along in quite a while, and I recommend it highly. 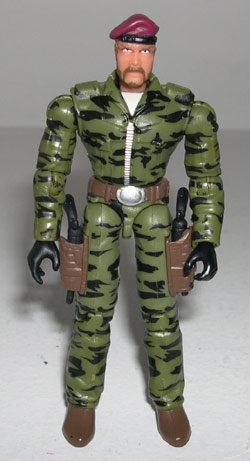 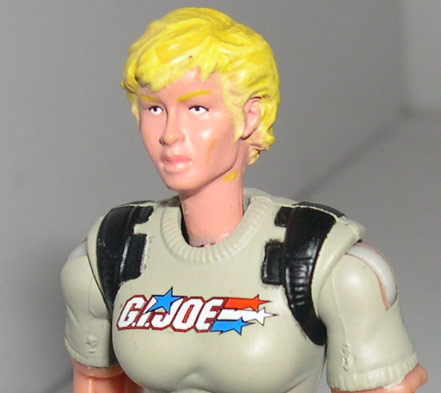 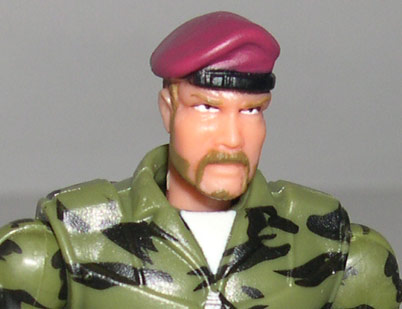 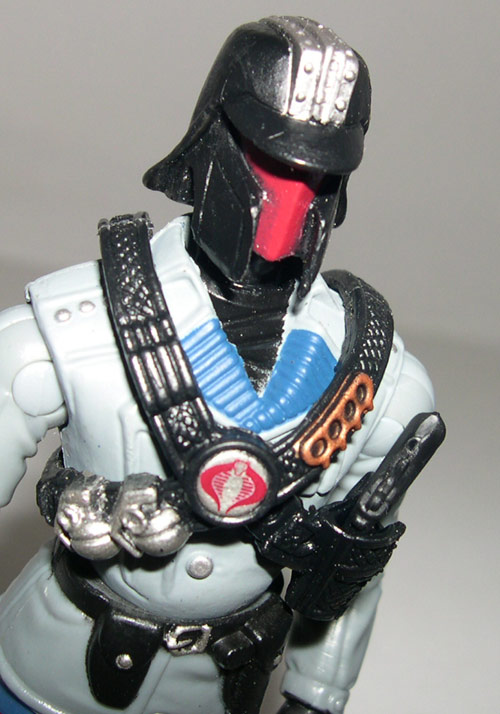 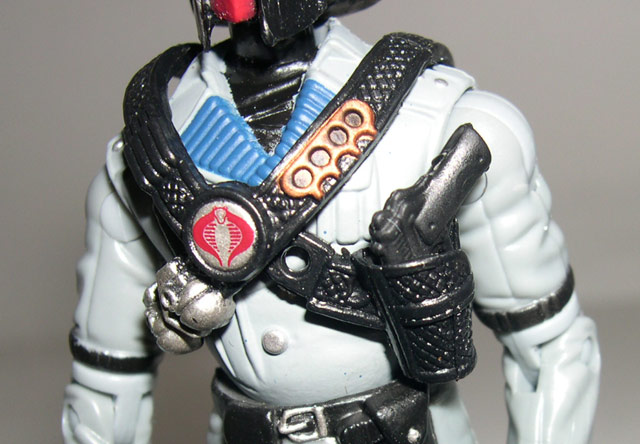 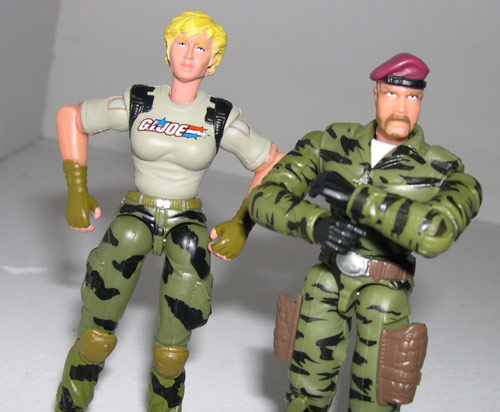 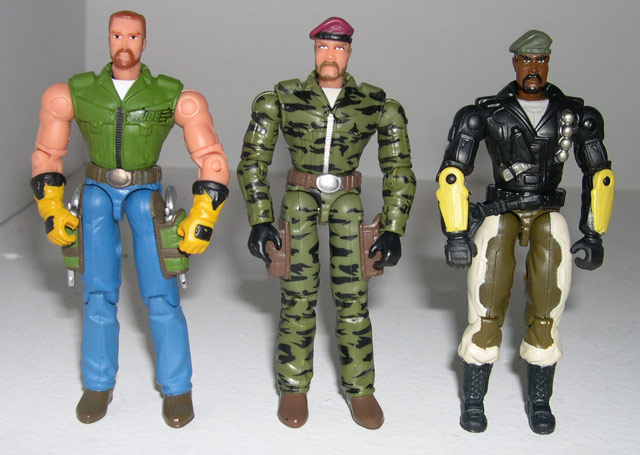 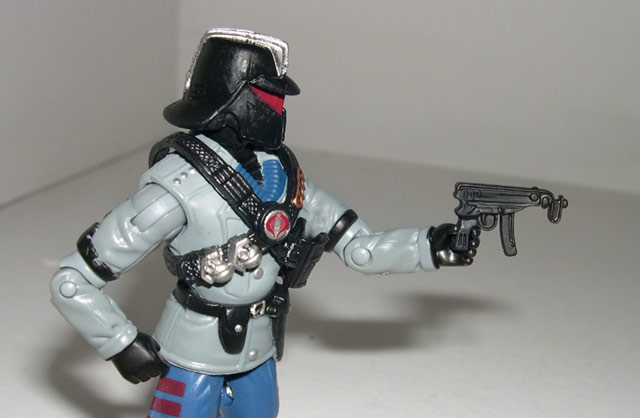 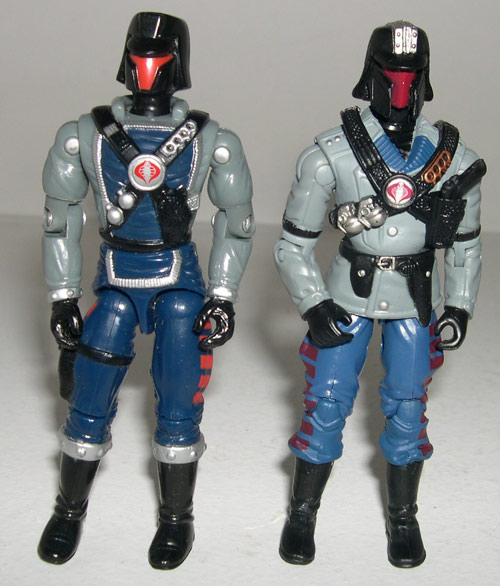 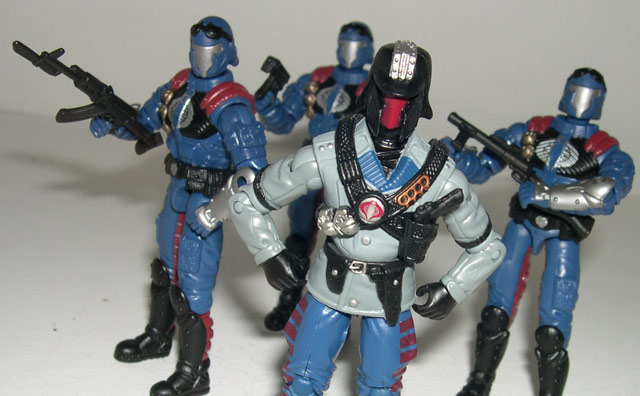 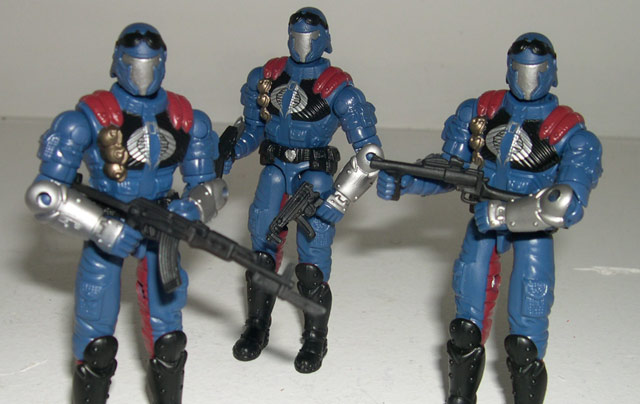 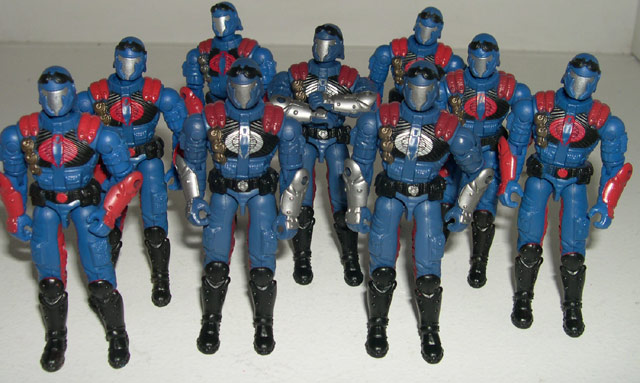 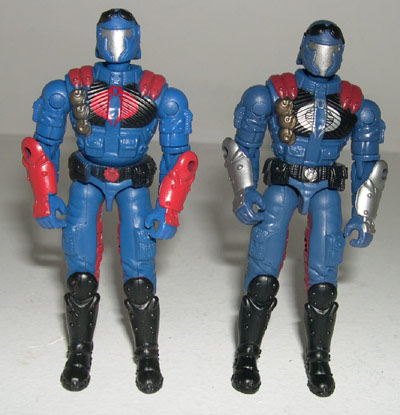 Check out my Lockdown Mini-Comic!