I feel like at least a portion of my G.I. Joe collecting life is complete.

I have a confession to make, first of all. Back in the day, I HATED the Oktober Guard. HATED THEM. It wasn't the communist background, it wasn't the characterization...it was quite simply the fact that there were no toys. If I couldn't play with the Oktober Guard, I didn't want anything to do with them, and in fact, I got somewhat irrate every time they made an appearence. I want to be able to reenact comic scenes with my figures, and this just wasn't cutting it. Red Star and Big Bear didn't make me feel any better about it, either. I wanted Brekhov, Horror Show, and Daina...I wanted Shrage, Dragonsky, and Stormavik. And no, by no means did that Toys "R" Us exclusive three-pack in 1998 even come CLOSE to giving me what I wanted.

And now...now I've got it. And I'm very happy. Not only did Hasbro give us some comic accurate Oktober Guard after all these years, but each figure is GREAT, each figure has a fantastic head sculpt, comes with great weapons, and perfectly resembles the character they're supposed to. With this pack, my Oktober Guard is complete, and I couldn't be more pleased with the overall impact of seeing these all displayed on a shelf together. 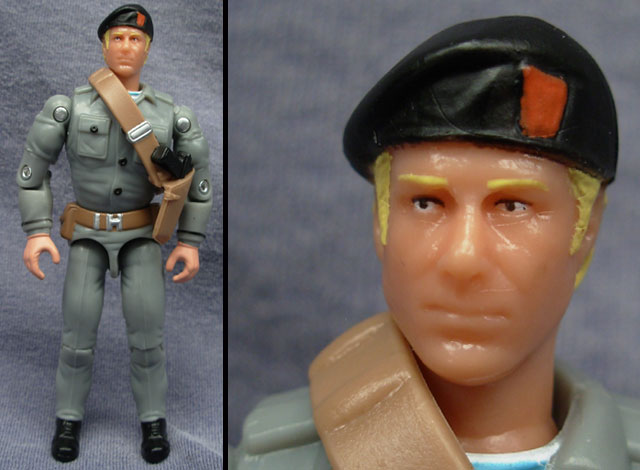 Lt. Gorky is the first figure I'll cover. He's had a mixed history in G.I. Joe land, both in toy form and in the comics. While his distinctive appearence in the Marvel series involved the beret you see here, for whatever reason Hasbro picked the Big Bear mold to represent him in toy form back in 1998. He went from a smooth and suave lady-killer in his little fancy beret to a large, scruffy Russian oaf which didn't suit his personality at all. If that weren't bad enough, Devil's Due then turned him into a pseudo-traitor in their comic book series, and killed him off rather unceremoniously.

It's really too bad, because out of the two new members, Gorky and Misha, Gorky was by far my favorite, and I always dug that Flint/Lady Jaye/Gorky dynamic when he appeared. It added some nice chemistry and character to him, and I love the fact that he's finally here in toy form as he should be.

His headsculpt looks great, as all comic pack head sculpts do. It's got that youthful look to it, and it closely resembles his appearence in the comic, which is always a plus. The beret is very nicely sculpted as well and he really looks how Gorky should look. Hasbro went with the "Action Soldier" body (last seen on the comic pack Grunt figure from Issue #4) and it works well, too, giving him a pretty plain military style, yet still different from the Red Star body that Brekhov and Stormavik got last time around. The body is beefy and large and fits in very well with the other Oktober Guard members...I cannot complain at all about this one. He does have a blasted "band hand" on his right hand, which kind of stinks, and is kind of weird, because there was no rubber band on his hand. Still, it was wrapped around the weapon, which warped it slightly.

His paint apps are curious...Gorky is much more often seen in a dark, dark gray or black uniform, but here he appears in a much lighter gray hue. Still, that gray color seems to fit in with his appearence in this comic, and his blue and white striped shirt underneath is pretty much his trademark. Overall, you get a figure that resembles his comic appearence very accurately and looks good.

Accessory-wise, he is nicely equipped with a familiar AK-47 w/ bayonet, small pistol, Beachhead's machine gun, and a strangely sculpted chest holster w/ strap. I find it odd that they sculpted this pretty minor part, and find it odder still that they didn't bother making the pistol removable...it is molded to the holster. Ultimately, though, these are all nicely Russian accessories and fit the character pretty well. 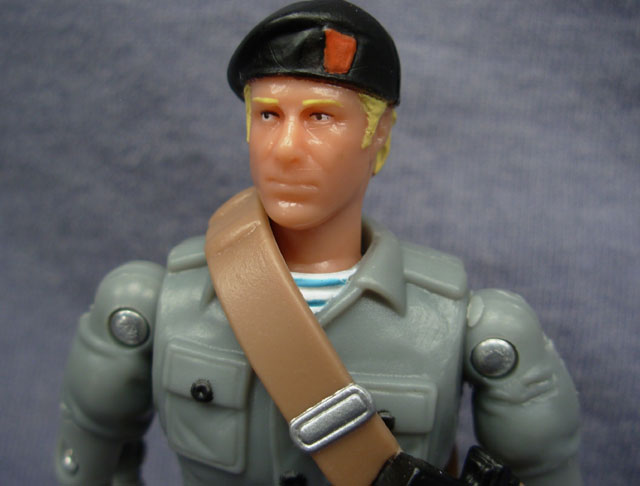 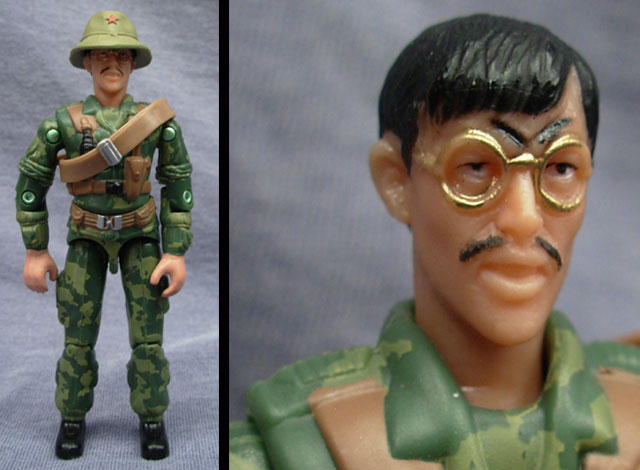 Sgt. Misha Zubenkov is the next figure in the line that I'm going to talk about, since he was the second new member to join in this issue. Misha always threw me for a little loop just because he looked so goofy. The large, coke-bottle glasses, that little moustache and goofy hat all just combined together to form a strange picture of someone I did not expect to be a highly trained Russian trooper. However you cannot argue that he has a great amount of character, and seems like a perfect candidate for the comic packs.

His head sculpt works very, VERY well with a comic-accurate look to his face and a greatly sculpted hat that looks as the hat should look, and while being removable, it also fits VERY snugly on his head. He's got those great, round glasses, the cool pencil-thin moustache and his face just looks perfect.

Misha does use the same familiar Red Star torso as two previous Oktober Guard members, but it makes sense and looks realistic. Oktober Guard isn't really known for their different uniforms as the Joes are, so seeing some consistent designs throughout the figures really makes sense, and it looks good here. Hasbro does change up the rest of the figure, though, using Snow Job's waist and legs, and what look to be Snow Job's forearms (though I'm not sure who's upper arms they are). What this does is make the figure look slimmer and different from the other two Oktober Guard members who have Red Star parts, and it also gives you a much "newer" feel to the figure. Like Gorky, he's got a little band hand problem, but ultimately that only takes away a little bit of my overall love for the figure.

The paint applications of this figure is also just flat out fantastic. They use different shades of green throughout the figure for an extremely elaborate camouflage pattern that just looks awesome. Very, VERY cool. Light brown straps and belts compliment the green with just the right amount of silver trim and black grenades...the colors all come together with perfection. It is terrific.

His weapons work well, too, giving you the same AK-47 that Gorky came with, a simple survival knife, and a newly sculpted strap that slides over his chest perfectly. These figures aren't overburdened with accessories, which is good in my mind. 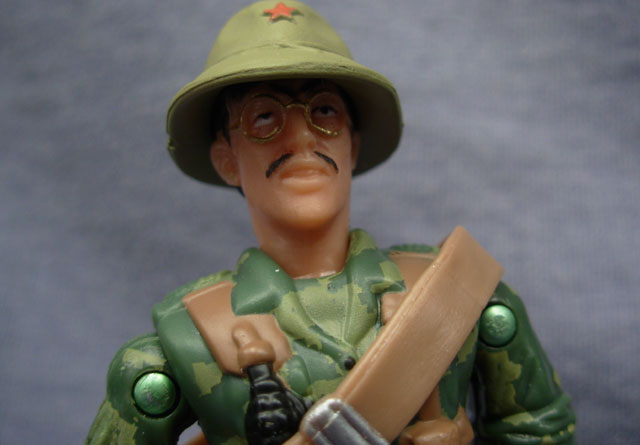 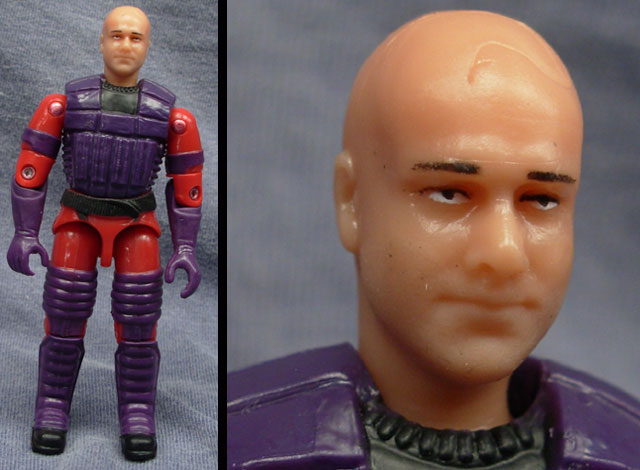 Dragonsky, ever since he was first seen in G.I. Joe Yearbook #2 has been a long-time fan favorite and someone that has been long desired. It's kind of odd, considering he's always been shown in a purple uniform and firing a flamethrower, two things that would normally turn off the adult fandom in general. But in Dragonsky's case, his appeal was not the least bit affected by this and he continued to top the list of characters fans wanted to see.

We got a little of what we asked for last year at the convention when he made a token appearence as part of the Steel Brigade set that came as one of the extras you could purchase in Minneapolis, and while that figure was excellently done, it didn't very accurately represent how he appeared in the comics. This version does a better job emulating Dragonsky's comic book look, and while figure-wise it isn't quite as nice as the Steel Brigade version, his more iconic look is a welcome change and something that will fit in well with the rest of the Oktober Guard.

Dragonsky's head sculpt is a pretty standardly sculpted bald head that looks very nice and very real-looking. You can never have enough bald heads for customization purposes, but even beyond that this head is great.

The body, like Misha, is a frankenstein with a number of different figures worked into one, and again, it's done to great success. Most obvious is the use of SAW-Viper's torso and arms...normally I do not like this figure at all, but in this combination it actually doesn't look that bad at all. Dragonsky has Ice Cream Soldier/Shock-Viper's waist and upper legs, and the D.E.F. Mutt's lower legs. These combinations of parts all fit together to give you a nicely bulky mold, and still closely resembles Dragonsky's comic book look.

His colors are also gorgeous, I think. The deep dark red base uniform looks great, and the purple shade is rich and dark, giving you a nicely different color pallet, while still keeping it at least somewhat muted. Pads throughout the legs hold the colors very well and each different color fits that portion of the uniform well.

One of the shortcomings of this figure would probably have to be the accessories. While the flamethrower is a great choice, I do wish he had come with his helmet, even if he doesn't wear one in this particular comic. Dragonsky's helmet is one of his trademarks, and I do miss it here...I'd even sacrifice the two new sculpt straps and holsters in this set if we could get a good looking helmet for Dragonsky, but that's a pretty minor complaint in the grand scheme of things. Beyond that minor issue, this figure looks terrific. 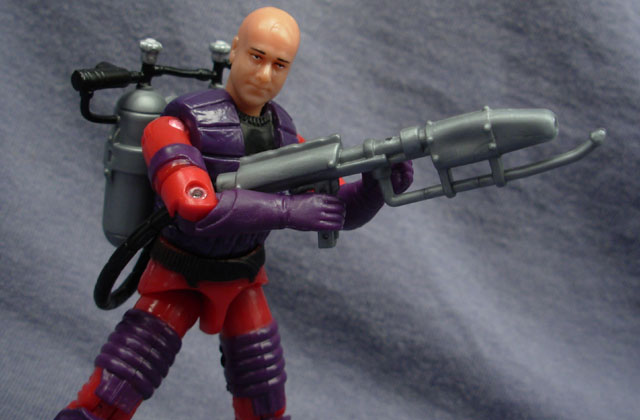 Now, THIS is a comic pack, and what comic packs were designed to do. Three characters we've never seen in mainstream figure form (at least how they should be represented). We've got a trio of great new head sculpts on top of some very nice franken-figures. It's great to see Hasbro use some creativity and get some use out of combining different figures to create some great new characters.

Finally my Oktober Guard is complete, and thanks to Hasbro for getting these packs out there and fulfilling some long-standing fan wishes. Kudos! 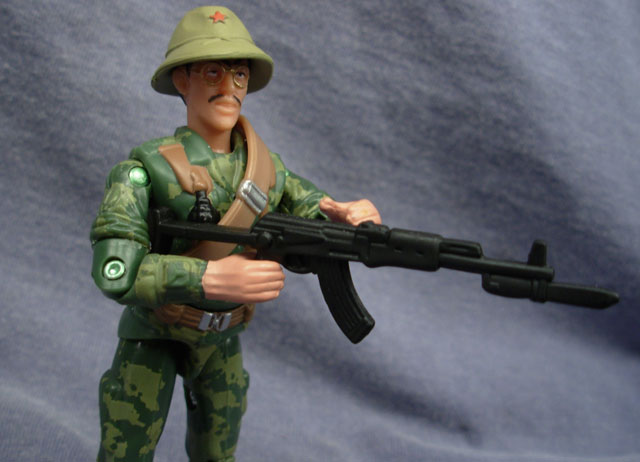 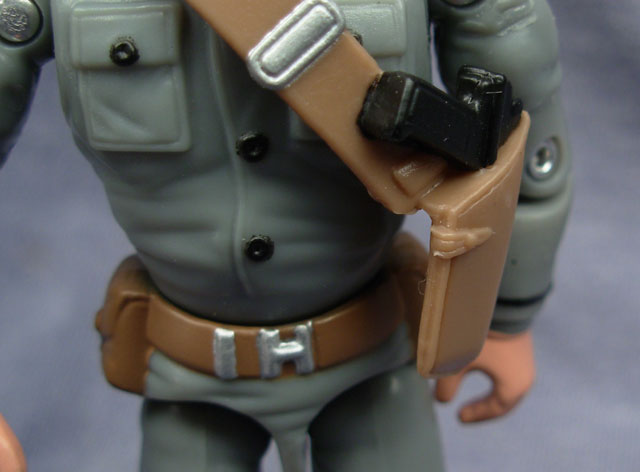 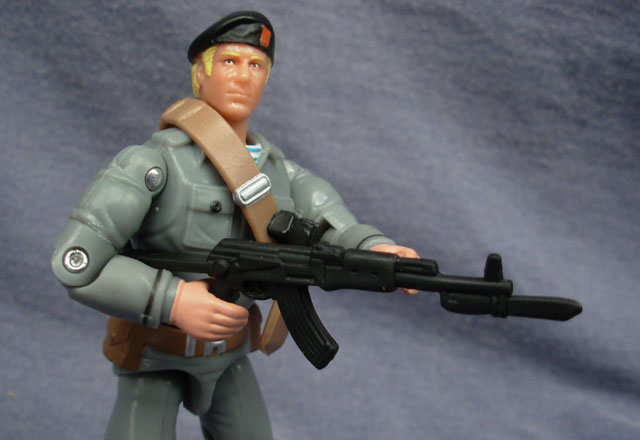 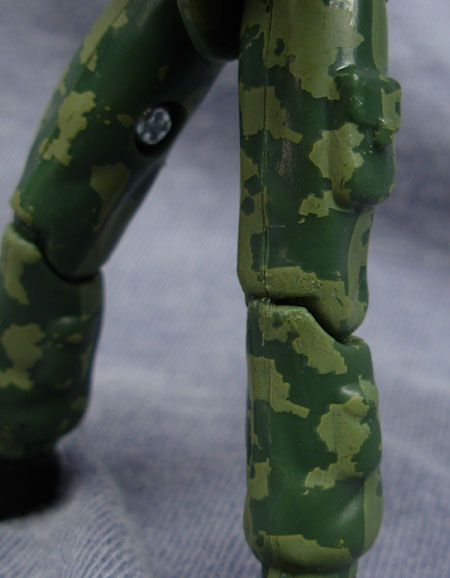 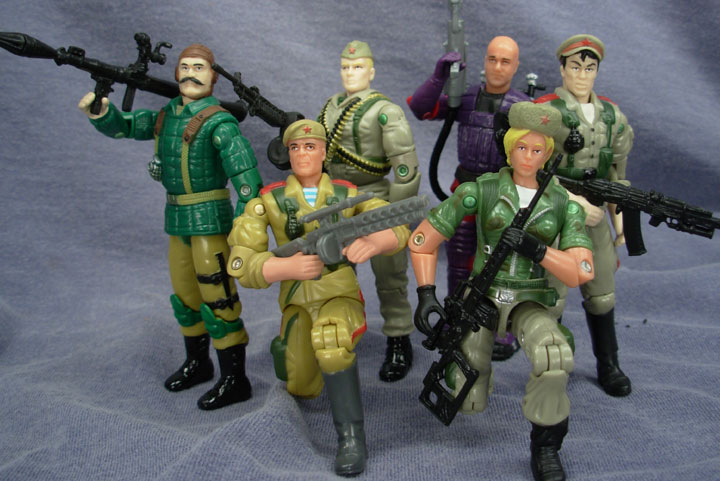 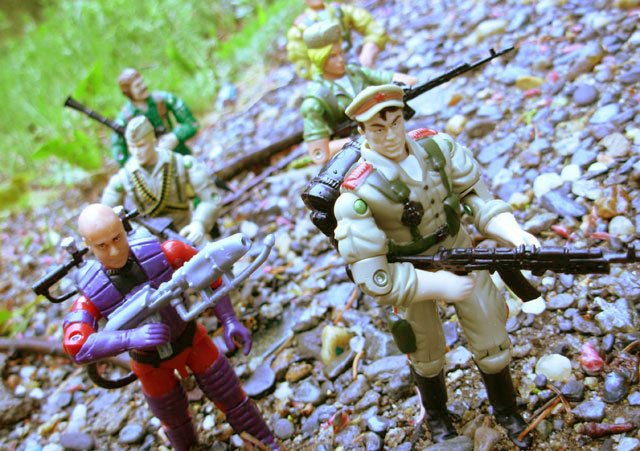 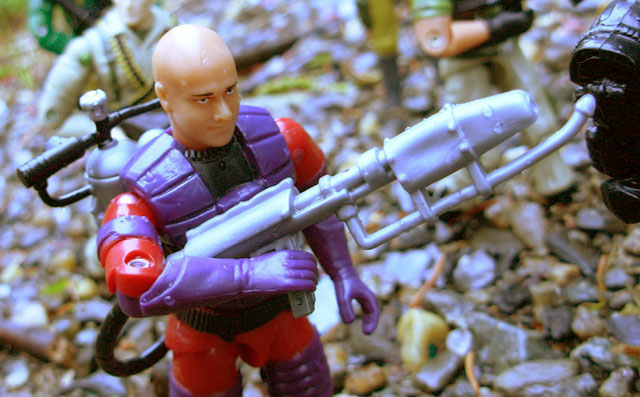 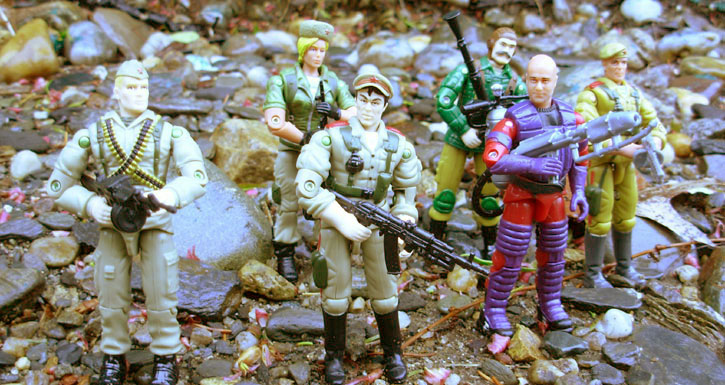 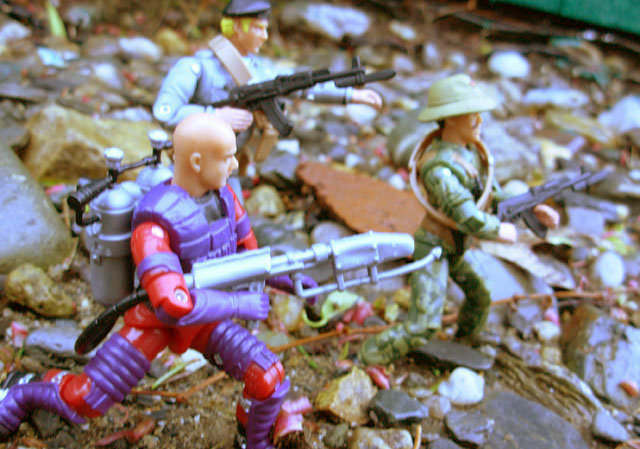 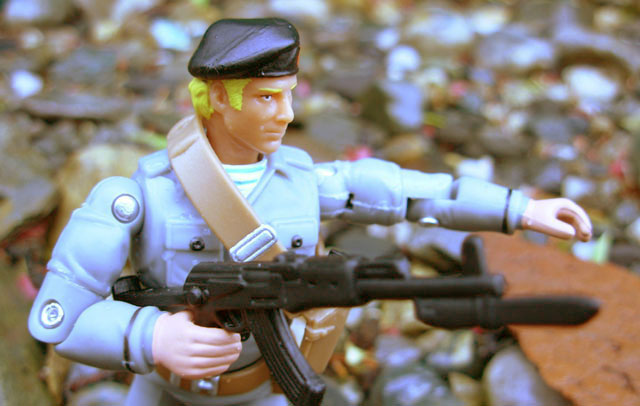 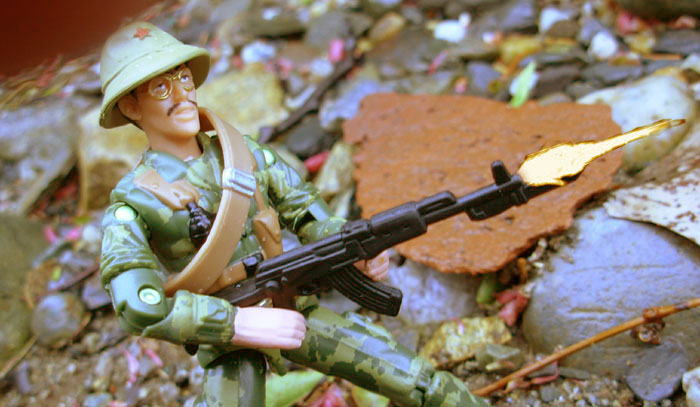 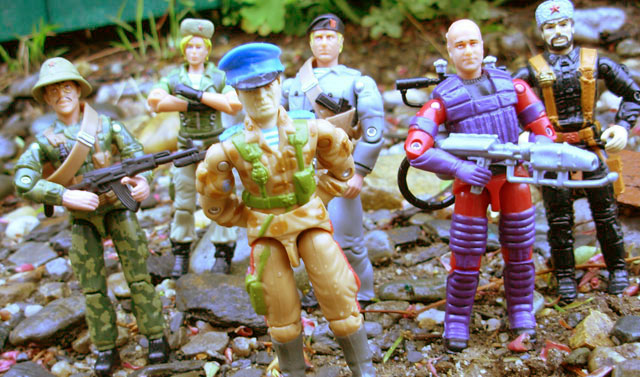 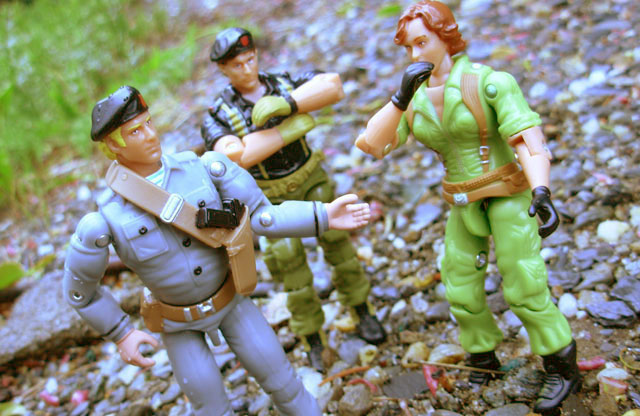