The Night Adder is just one of those vehicles that fans of the online Joe world either love or hate, plain and simple. Folks either really dig the whole snake motif and streamlined style, or they slam the unrealistic shape, ineffective combat design and strange aerodynamics.

Guess what side of the argument I'm on? ;)

Personally, as I've said time and time again, I'm a fan of the sci-fi edge. As long as something looks cool, I can overlook the stylistic and realistic shortcomings...never is that more true than with the Night Adder, a plane that, by all rights, shouldn't get airborne. Yet in the G.I. Joe/COBRA conflict it becomes a wicked rocket with cannons, deadly to all Joe aircraft in the air. I like it a lot.

Where the Desert Humvee is the epitome of super-realistic Joe vehicle design and implementation, the Night Adder is the exact opposite. It seems to be the pinnacle of pseudo-futuristic/sci fi schematics...a barely aerodynamic rocket wrapped around a weapons platform and thrust into the air by tiny jet engines. You know what, though? Just like the red/black predecessor, this version really works.

It only makes sense that COBRA posesses vehicles and weapons of an unknown origin and behaviour. With MARS on their side, and the wealth of secret scientists they have working for them, COBRA should have vehicles and equipment above and beyond what we know. It's their edge...while we launch frontal assaults with M1's, Humvees, and F-14s, they're zipping around in HISS tanks, Rages, and Firebats. To me, the Night Adder fits right into that mold, and most importantly, looks really cool doing it.

Immediately you're struck by the super slim, rounded styling of the fuselage, quite obviously sculpted with a snake in mind. A slightly broad body holds the pilot and gunner, and it slopes to a blunt nosepoint, it's eyes and teeth boring into the hapless pilot caught in its path. With a rippled snakeskin surface, this spooky plane only solidifies who's behind it's construction and deployment, and works as a calling card just as well as the familiar toothy logo of COBRA. Realistically you realize that in the real world, this thing wouldn't be flying...but we're not in the real world. The plane's design is helped by tiny wings that slide out to grow longer and a pair of powerful thrusters in the mid-rear, forcefully pushing it through the air. The stabilizers and wings, while somewhat stubby, still look very cool and all blend perfectly with the rest of the plane...but perhaps the coolest part of this attack craft is the entire weapons platform.

We start off with a mini-bubble up top that a gunner sits in to man the twin top cannons, able to spin and fire and anything in their way. But that's just a warm up to the powerful quad-cannons, each pair situated on their own side of this aircraft, capable of tearing anything out of the sky. These are all very cool aspects of the plane and really make it shine in my eyes. Now the difference between the original and this one, is obviously the color scheme. Where the first Night Adder was cast in deep red/black hues, this version goes the blue route, which works wonders. Blue is definitely a COBRA color and combined with the black body, it all works together to near-perfection, giving you a great update to an already cool plane. I'm not sure if there's even one color I like over the other, they both work in different ways, and both look equally nice.

However, I must admit, the Wild Weasel that comes with this jet does NOT look equally nice. Where the original was a great black leather and shiney red paint scheme, this one is just kind of a blue-gray and silver. The color scheme is interesting, but not nearly as striking as the first, in my opinion. Even though the combinations of colors all swirl together and work with each other nicely, the effect is just a little too bland compared to the black/red predecessor.

The Wild Weasel mold is still pretty nice, even though it does suffer from the obvious proportion problems, especially when compared to newer figures. The helmet design is still extremely cool, and I'm a big fan of the leather-like detailing of the uniform, with buckles and straps to spare, but this different color scheme just isn't quite as interesting to me.

Even harder to find than the Desert Humvee, the blue Night Adder is also much more worth the hunt. It's a very cool follow up to an already cool plane, and I think it fits in well with COBRA's new sculpt motor pool. It took Hasbro a long time to get the snakes a fighter jet, but I think the wait was worth it, and this is a very cool new plane. It's no Rattler or Hurricane, but it's got it's own bonuses and I think if you can find it, it's worth a pick up. 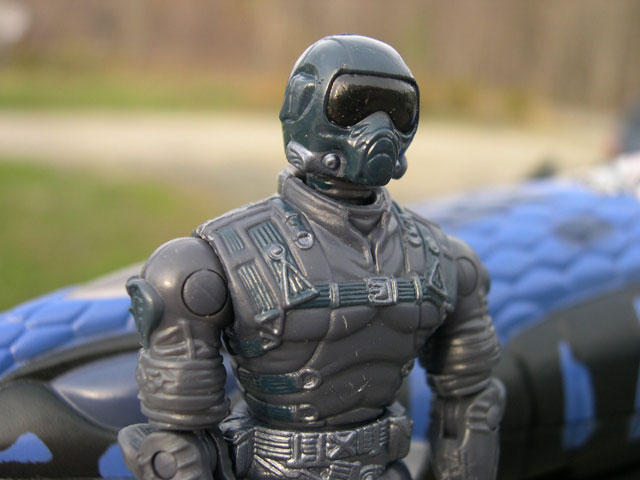 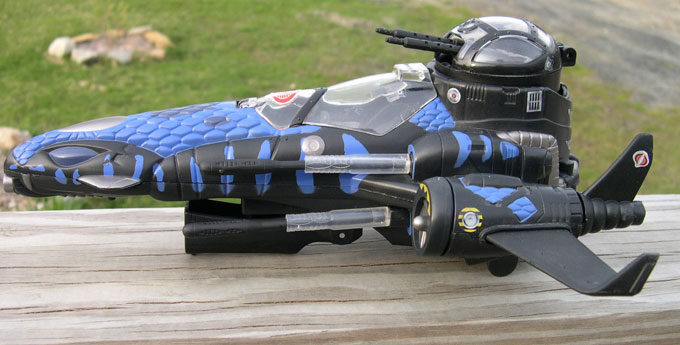 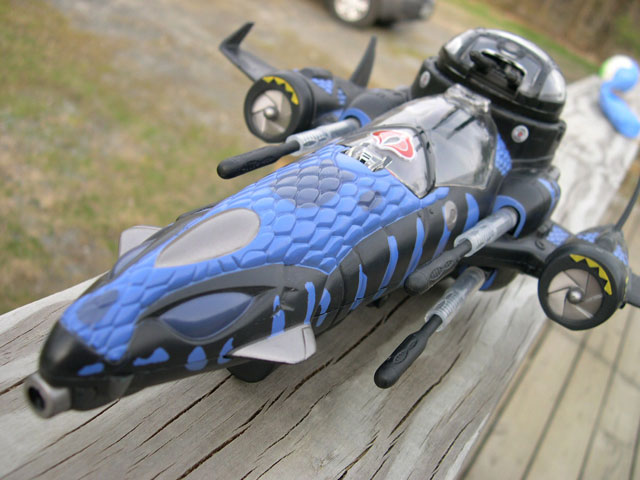 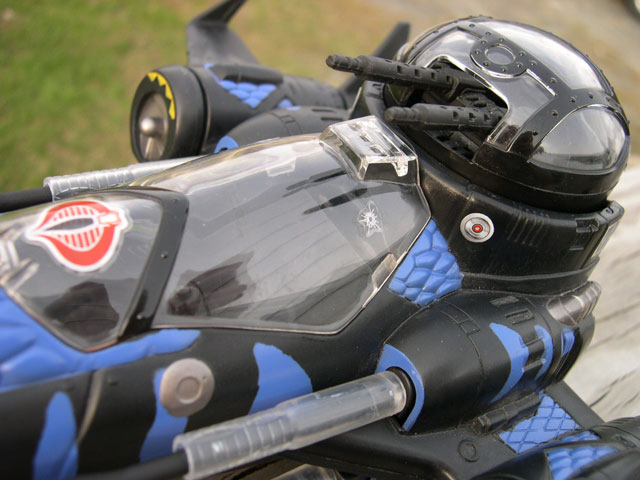 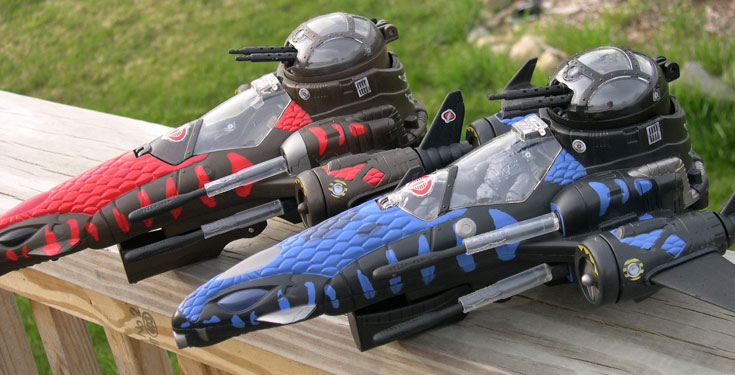 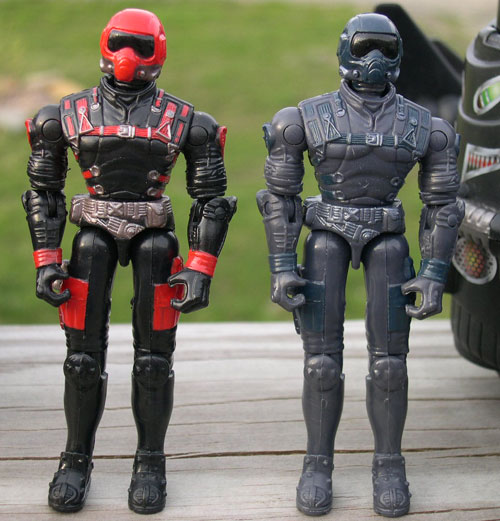