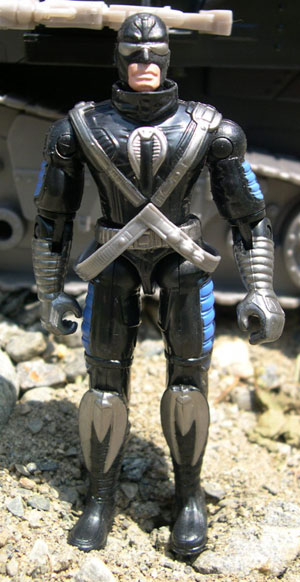 It would have been tough to tell fellow Joefans that here and now, in June, I'd still be doing G.I. Joe reviews even a month ago. It was the "deth of teh line"...Joe was going on hiatus, fans were certain "hiatus" meant "demise"...even publications like Toyfare ran with it without fully understanding the facts. Now, here we are, a few months after the supposed "hiatus" and new stuff continues to come out, and as we gear up for Convention time and July, promises appear on the horizon for newer and cooler collector-oriented single pack figures. It's a great time to be a Joe fan, and I only hope the sales of the Direct To Consumer stuff AND the Sigma Six stuff end up strong enough to support it. If not, well, at least it will go out with a bang, not a whimper.

Well, unless you look at this particular vehicle...it doesn't whimper, it whines and cries. :/

The HISS is the venerable COBRA vehicle. The backbone of all COBRA forces, and up to this point was a nice and simple, moderately stylized fast attack tank, as it should be. The first version was a great simple two-man assault vehicle. Nothing elaborate or complex...just sloped armor, a reinforced canopy, two sets of treads and a BFG up top. The second version of the HISS took everything that made the first one cool and improved on it, if you can believe that. The same wicked sloped armor, but with much more detailing and sculpting involved...a bigger, nastier cannon on top with twin support machine guns and twin missiles...heck, even a transport section for four troops in back. How can you get much cooler than that? Well, apparently you can't, because the HISS IV took a big step in the wrong direction.

Back when it first came out, it wasn't a BAD vehicle per se...after all, it was one of the first new sculpt vehicles we got. But now, when compared to how cool the stuff they release now is...well, this vehicle just doesn't compare, even with an updated color scheme and retooled top cannon.

I can see where Hasbro was coming from with this new design...they're trying to take the basic angular appearence of the HISS and really spike it up with a snake motif. The idea is nice...the execution, well it kinda works, but not really. Actually, the Snakehead cockpit is really my favorite part of this entire vehicle. The beady eyes, angular serpent features, and pronounced fangs are all really cool and have some great potential. But a couple of things hurt this vehicle overall. First of all, the more rounded than angular overall look of the vehicle severely affects it's cool factor, I think. One of the best things about the previous two HISS tanks was the solid intimidation of the angled armor...it just looked tough. This one just looks...well, not so tough. And I'll tell you, the single worst part of the vehicle, even with this updated version, is the top turret. This thing just looks horrible. 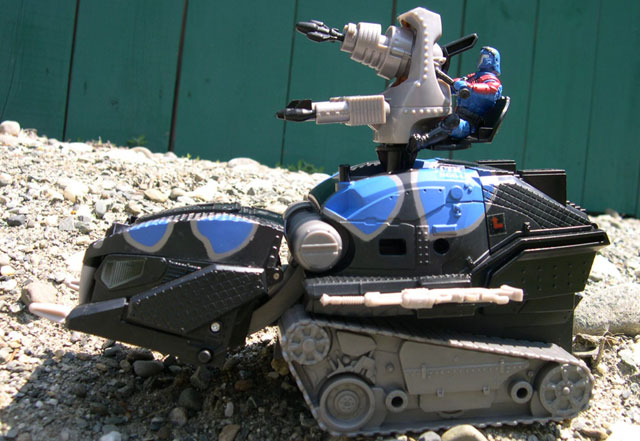 I know Hasbro took our queue from the first version when we said it lacked power...but I'll tell you, power is important...but look is even more important, I think. You could have just a single cannon on top...but it better be a sleek, streamlined, and punchy looking cannon. Both the original version and this version look rediculous with this strange, jutting obtrusion popping up out of the hunch back of the tank. It doesn't matter if it's a small cannon, or a trio of small missile launchers. The turret itself looks clumsy, awkward and useless. They tried to improve on it, but really, there is no improving it without chopping the whole thing off and trying again.

Then we have the whole play value of the raising cockpit...it's all right, I guess, but nothing terrific. I can imagine it would lift up like that to get a higher angle, and a better field of fire on incoming troops. The only problem is, the two missile launchers on the cockpit are tiny and ineffectual in appearence. They just don't seem that dangerous, so this feature seems useless to me. The two-man storage compartment in back is a nice concept, as is the entire vehicle...but again, it just doesn't execute well and doesn't add any real flair to the vehicle.

To be fair, the paint job here is a vast improvement over the original...so if you really need to own one of these HISS's, I heartely recommend this version. But the new black and blue paint apps aren't enough to really make this a desirable vehicle to me, as it still suffers from a lack of armament, and a non-threatening design. The concept is neat...the snakehead cockpit is pretty cool and inspired. But nothing else is, and the overall vehicle just falls flat. Aboslutely nothing compared to the two originals (especially the second one).

This is one upside, though. Ever since they first appeared, I've been a huge fan of the Pit-Vipers. The out of the ordinary uniform design really grabbed me from day one. I love the high collar, silver shades, open mouth face mask, and the combination super villain/snake themed uniform. The only thing about the first ones I wasn't wild about was the light tan trims on the uniform. The gray fit...that light color did not, and I couldn't really see how they wore those uniforms as "infiltration specialists".

But...this figure is a vast improvement on all fronts. The mold is proportional and the uniform design is fantastic. I love the padded armored uniform and the mask design. The COBRA theme throughout the figure is effective and well-executed and I just love the figure completely.

When you take the great mold of the original Pit-Viper, and now produce the figure in solid blacks, rich blues, and dramatic silvers, you really have a winner...this figure is a winner, completely. He is so cool, I am almost tempted to grab a few HISSes just to end up with a small squad of Pit-Vipers, but the HISSes are just bad enough that I just can't do it. Instead I'll use this Pit-Viper as a senior officer and single character. I think he works really well there, and the uniform design has enough personality that this can be a single character and really function as such. Great job on the figure, substandard job on the vehicle itself.

Upon first glance of this vehicle you can instantly see just how far Hasbro has come in a few short years. Vehicle designs these days are worlds better than they used to be, and unfortunately, this particular HISS just does not translate well into the current design scheme. I found this to be true of pretty much all of those vehicle prototypes that Hasbro showcased on their site a short while ago...the HISS was probably the best one of the bunch, and judging by the final execution, I think I'm glad they shelved the rest of them.

The figure is really very nice...but not really nice enough to warrant a $15 price tag. I don't see any reason really to recommend this vehicle at all...but if you know you love the HISS IV design, at least get this one instead of the original. If it were up to me, I'd say save your cash for the DTC launch and get some really cool stuff. 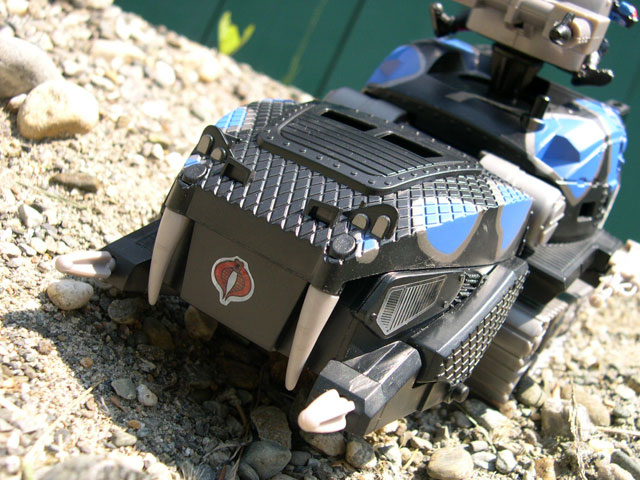 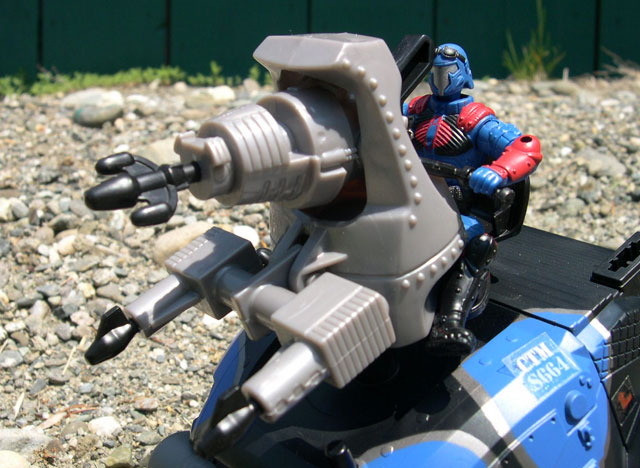 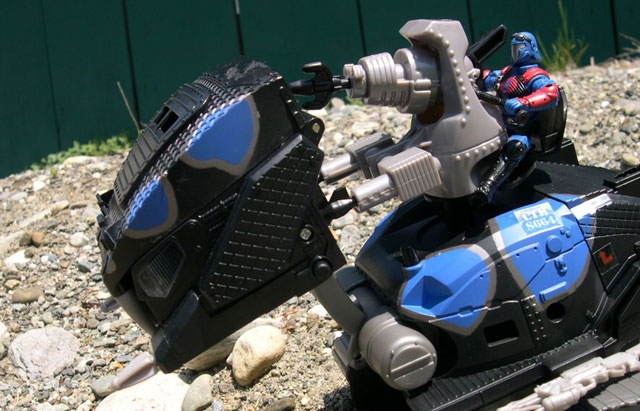 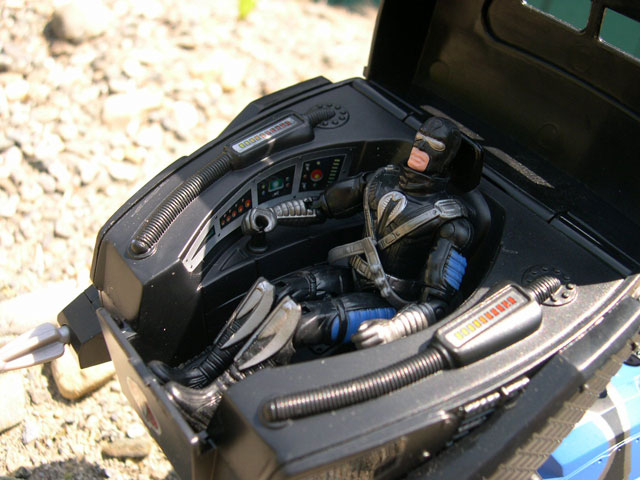 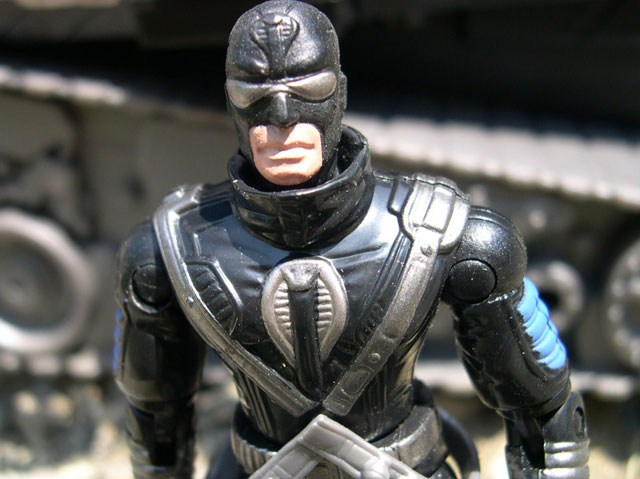 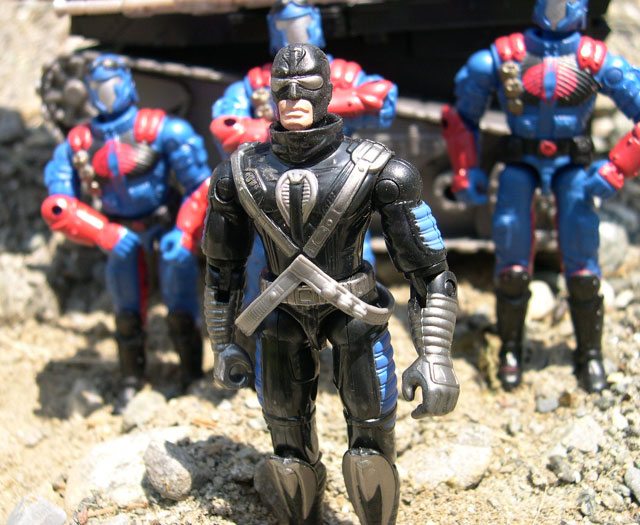