It seemed so long ago that the Alpha vehicles almost seemed like cast offs to Hasbro. Tiny, uninspired hunks of plastic that were merely slapped together and pegged with a figure to try and make some extra cash. Due to the limited size of the vehicle, Hasbro didn't seem to put much thought or effort into design or execution. They were either out of scale, blocky and ugly, or all of the above. Wow, how times have changed.

I think it was Valor Vs. Venom that actually brought about the change, although things started getting a little better towards the end of Spy Troops...almost like Hasbro just needed some practice. They started off with stuff like the Fang III and the ATV...moved on the monstrosities like the Battle Blitz and Road Rebel...but then started clicking. The Venom cycle was pretty nice, even if it was rediculously oversized, and I personally LOVE the Treadfire. But once VvV hit with the Tigerhawk especially, Hasbro cranked it up a couple of notches, for sure. Cramming loads of play features and cool design elements into a $10 mini vehicle isn't easy...but it looks like they've got the hang of it, just in time for the hiatus. ;)

I loved the Desert Coyote when it first came out. Sure, it has serious realism problems, but it's a sleek, speedy looking little dune buggy, and I really loved it. The paint apps were cool, the driver made a decent Clutch figure and it just rocked.

The new one rocks almost as much. It's not quite as cool as the original, but it makes up for it in other places and ends up being a pretty neat little land craft.

First of all, the overall design is the same as the original. Instead of round and blocky, Hasbro managed to make it slim and angular...it looks like it could really pick up some steam and tear through a line of COBRA's in a blur. The angled rollbars offer some protection for the driver, yet still look very neat, and I just love the looks of those little studded tires. Where some people had issues with the way the front cannons/handlebars are handled, I find myself really liking it. Combining an operation mechanism in with the firing method seems pretty smart...no more dividing your attention between one or the other. You can drive and steer, then merely pull a trigger to shoot ahead of you. I like it a lot.

There is a slight downside to this new version, though...one of my favorite parts of the original was the very cool dark green and black paint apps...I liked that look a lot, even if it didn't really fit the "Desert" Coyote very well. This current model was definitely designed with desert in mind, and personally, I prefer the darker, more versatile paint apps. The tan still looks nice and pretty realistic...I just personally like the old scheme better.

But then you have to add in the double fire power, and that puts this remake right back in the hunt! Where the original Coyote only had a single barrel gatling gun, this monster has twin gatlings on top! A small little adjustment, but a huge improvement in firepower and it looks GREAT. I can only imagine the kind of damage this little buggy would do, whipping through the COBRA ranks and tearing things up with the twin chainguns. Some very cool imagery! 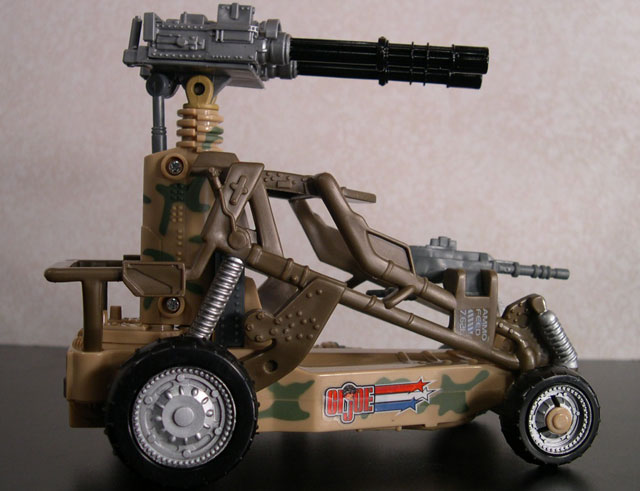 Then Hasbro polishes off this new little Alpha vehicle with a pretty nicely adjusted figure. We first saw this mold as Recondo back in Spy Troops, Wave 5, but pretty much everyone agreed that it really didn't look like the Recondo we all knew and loved. Well, that's all changed now. The figure retains all of the greatness of the original version...a nice, in proportion body sculpt (as all of Wave 5 was) starts it off. But this mold doesn't live on proportions alone. The armored vest is a great addition and meshes well with the baggy cloth uniform underneath. The rolled up sleeves come across pretty well, and make sense for a Jungle Trooper. His overall uniform design is very military, yet laced up enough to work in the pseudo-real universe of G.I. Joe. The large, clunky boots look great as always and mesh very nicely with the khaki style pants.

We do hit a few stumbling blocks with the paint apps, since Recondo is supposed to be a jungle trooper, yet is colored here in tans and browns, almost more indicative of a desert environment (supported by the fact that he comes with a desert-themed vehicle). However, it's hard to complain, since the original Recondo back in 1984 (a fantastic figure in it's own regard) is also mostly a tan and brown paint scheme.

Still, even with the desert apps, Recondo looks very nice. Add in his newly sculpted folded hat on his head (with little teeth around the border!!) and moustache, and you have a very, very nice rendition of the old jungle trooper that we love. These small changes really turn a figure that was questionable into one that actually resembles the character he was supposed to originally. The moustache is a little iffy, I'll be honest, simply because there is no sculpting underneath the paint. But there is some effort done there, and that makes a big difference to me.

All in all, I'm quite happy with this latest Joe Alpha vehicle, and it's nice to see it going out on a high note. These are pretty tough to find right now, but with no other new Joe product hitting for a while, I think given time, these will distribute more widely and be easier to find. If you do find it, I'd say definitely pick it up. 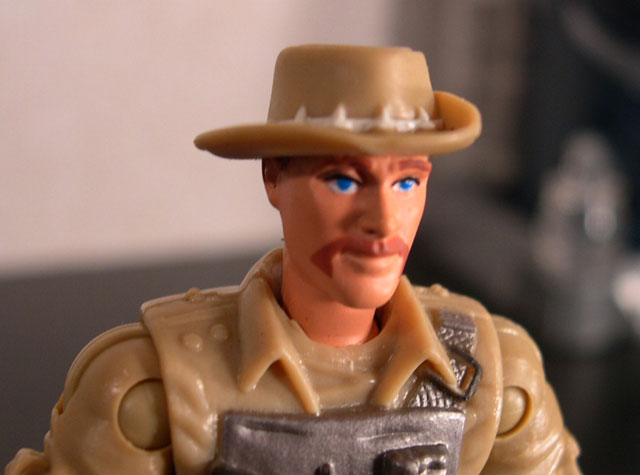 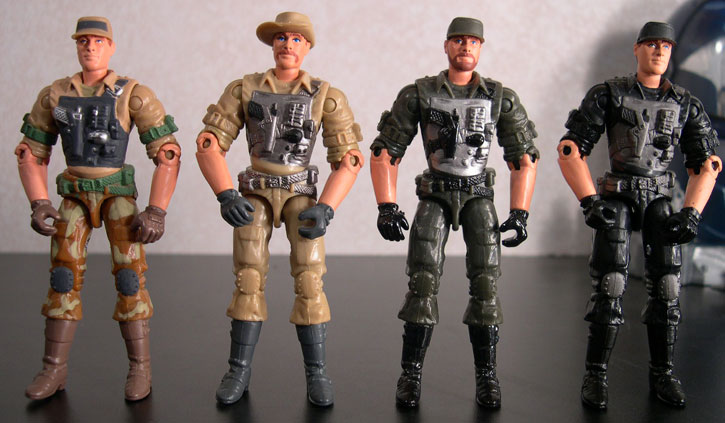 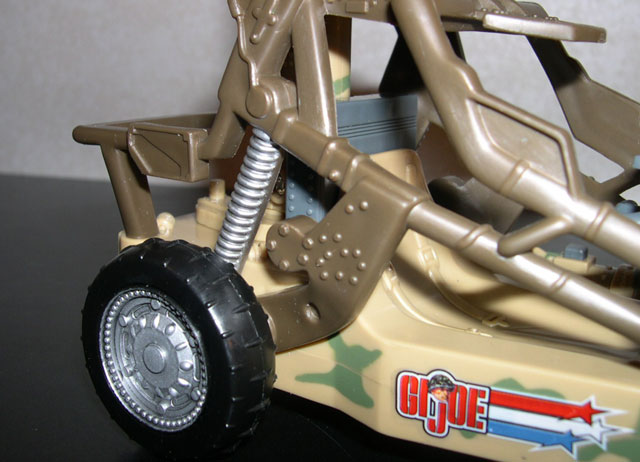 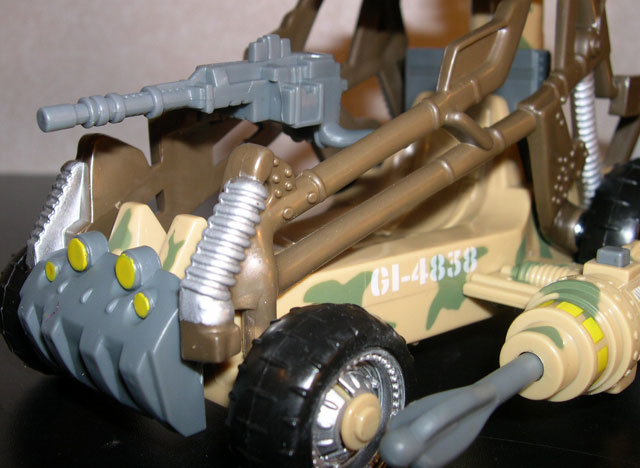 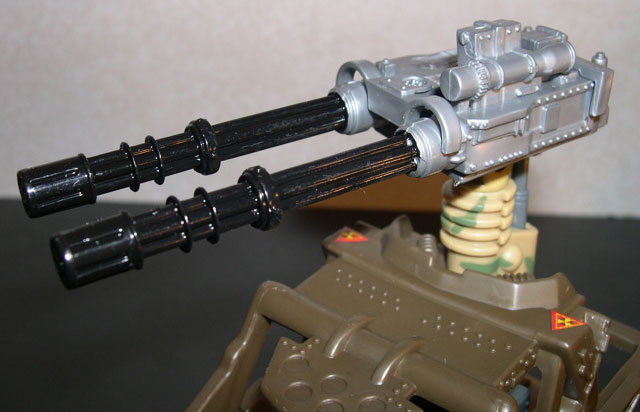 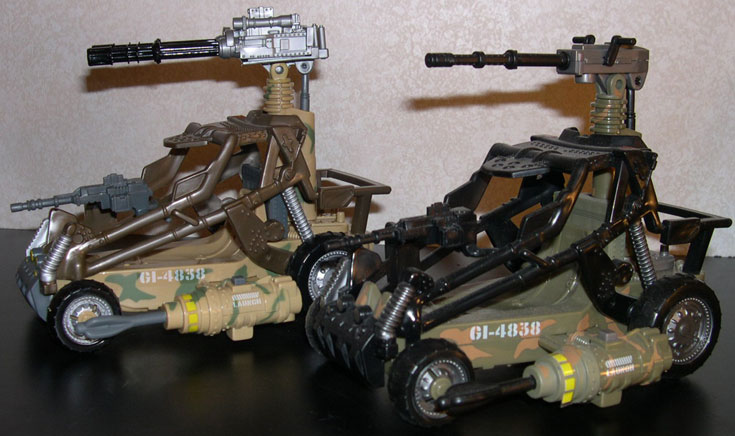 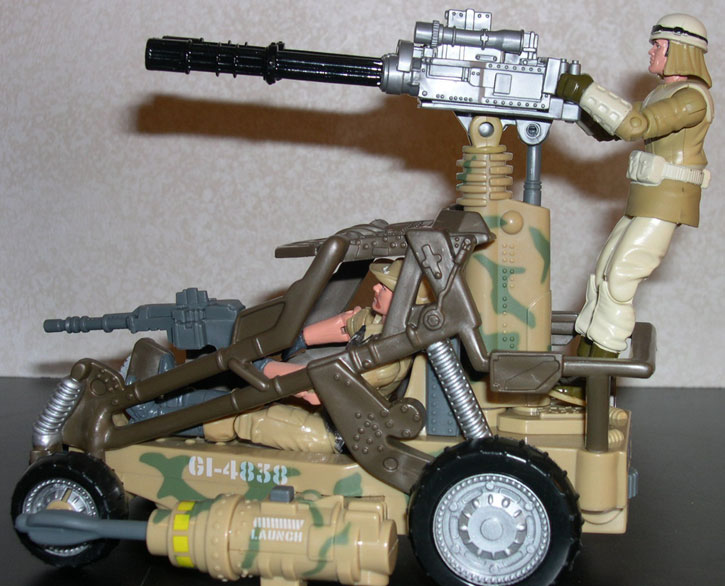