Well, what can you say really? There is such a history and such a background to the COBRA Trooper that opinions are going to be very strong. With the Devil's Due version gracing their pages four years ago, it seemed that the time had come to "grow up" the Troopers a little bit and make them more state of the art. With the Toys "R" Us Infantry Set a couple of years ago, the dated mold really gained a terrific new life and they pretty much became the default backbone of many a COBRA army, including mine. Still, people really wanted to see a more modern rendition, especially designed around those cool Devil's Due elements of a few years ago.

Once collectors got wind that Hasbro was planning on finally releasing a COBRA Trooper figure in their DTC line (and based on the new head sculpt for the Wave 2 Range Viper) people got expectedly excited that perhaps we would finally get that overdue Devil's Due version on store shelves. At least we were feverently hoping so.

Sadly, that did not turn out to be the case, and while the COBRA Trooper figure is by no means a bad figure, the wild expectations for an updated trooper ended up leaving a lot of collectors somewhat cold when they got their first glimpse...including me. However, I have warmed up somewhat to the Trooper, much like I warmed up to the CG from Wave 1, and can appreciate certain aspects of the figure, even without the head to toe Devil's Due design.

I think the mold's foundation has probably caused the most troubles with collectors, but honestly, I don't mind it at all. See, I'm a huge fan of Ghost Bear's mold, and find it one of the most interesting molds of the Valor Vs. Venom line. Of course the uniqueness of the mold is one of it's strong selling points, and once this uniform starts getting distributed to all COBRA blueshirts, that uniqueness is lost, but regardless, I still really like the mold, and I think it can potentially work for the trooper.

The mold itself is slim and wirey, and has pretty darn good proportions, especially for the Valor Vs. Venom line. But as slim as it was, the mold still has a certain substance, with a very nice "leathery" texture on the uniform, thickly padded gloves, and those very strange, but very cool square pads scattered throughout the figure itself, on his arms and legs. Of course, you also have the well-sculpted COBRA symbol on his chest, although I'd rather it was more "front and center", and the simple grenade straps work well, too. Little touches like the puffy pouches around the waist add some more beef, and overall, the mold is really pretty cool. I'm not sure how it works for a COBRA trooper, however.

As for the head sculpt...well I covered that in my Range Viper review, and found it to be one of the highlights of the figure, and the same holds true here. The mask format with the ridged forehead and padded mouthpiece just all look incredibly awesome. A terrific way to update the more familiar old school look.

Really, how else could we expect this figure to be painted? The classic COBRA blue looks very nice, although it's somewhat lighter than the SAW Viper, but that is fine. The gray trim on that blue is pretty mild, but looks great, and whatever flashes of red there are are all used to great effect. The simple blue/red on his mask especially looks awesome, as does the COBRA symbol and the aforementioned padding. Little touches of silver on the grenades also give the figure some very nice life. A pretty simple color scheme, but amazingly effective, especially for the trademark "blueshirt".

Not too bad overall, I'd say. The AK-47 with bayonet is a must have, and it suits the figure perfectly...I'm quite happy he came with it. Ghost Bear's familiar straps around his waist are present as well, and look fine. One of the biggest points of contention when pictures first surfaced was the helmet...it really didn't look like it fit all that well. Well, it does fit pretty well, although still sits a little high and can fall off extremely easily. It is soft and malleable, though, so a simple squeeze should get it back on the head...for a little bit, anyway. The overall design isn't great, and I'm not wild about how the sides flair out, but all in all, the helmet looks good and fits.

Lastly, he comes with a pretty huge two-part bazooka, which is cool enough, I guess. Those missile launcher accessories never did as much for me as the plain Jane guns, but this is an imposing weapon and works well within the confines of the COBRA Trooper. It hooks together pretty interestingly, and the weapons port on the bottom of it allows it to be used for other functions, too, which is cool.

Really, a fairly comprehensive weapons allotment...nothing amazing, but it all makes sense.

Frankly, expectations were so high for this figure it would have been nearly impossible for it to meet them. At first I found myself quite disappointed, but over time I have warmed up to this figure a little bit, as something that stands on it's own merits. It utilizes a solid, functional mold, has some cool accessories and is pretty reminiscent of a modernized COBRA Trooper, exactly who it is supposed to represent. Doesn't blow me out of the water, but it is a cool figure nonetheless. Doesn't make the top of the list this go round...that award goes, surprisingly for me, to a Dreadnok. 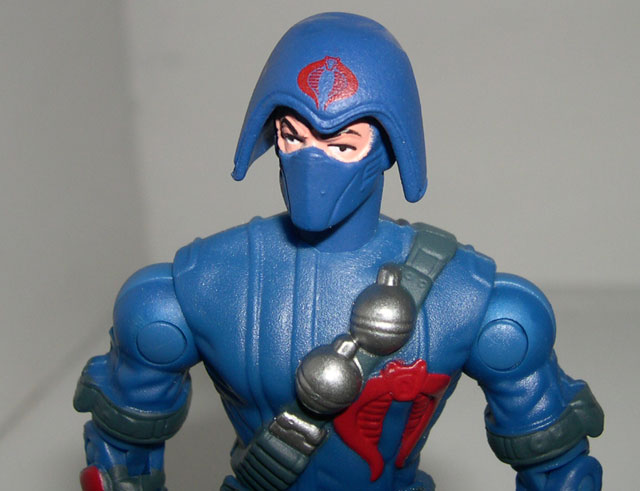 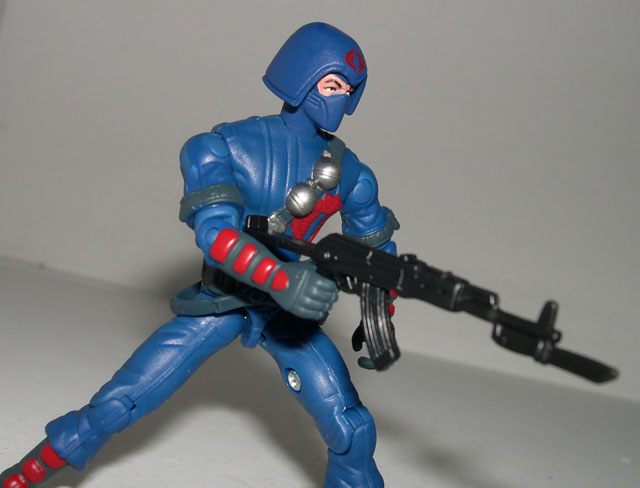 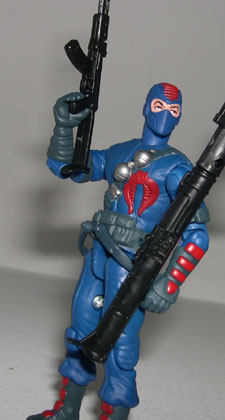 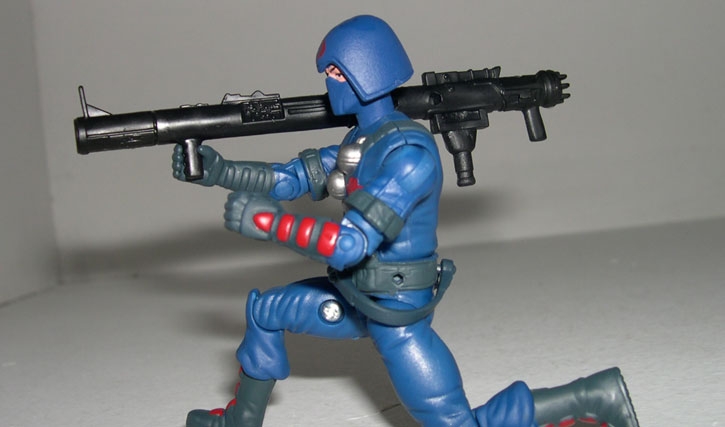 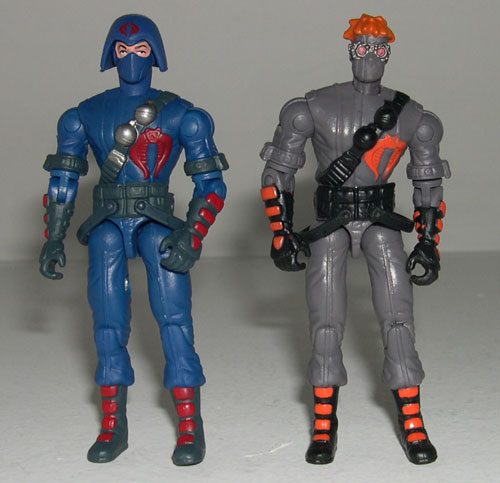 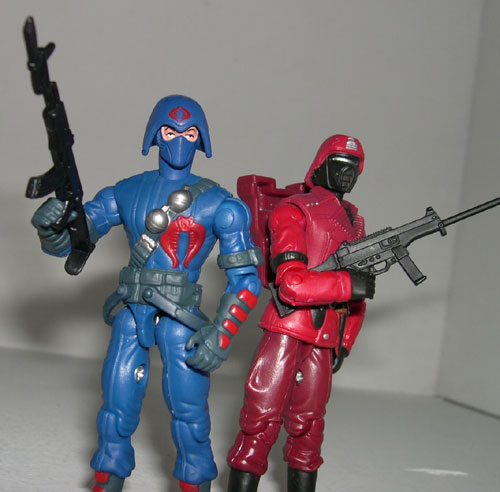