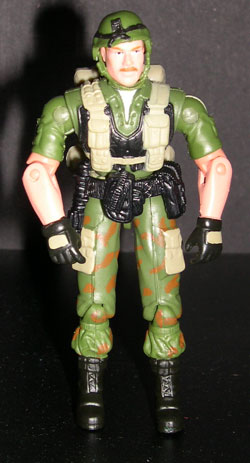 Footloose has always been a little weird to me. The classic figure is really almost perfect. A great head sculpt, nice military look and great overall sculpt. Your basic jungle trooper with lots of cool gear and pretty much everything you could ask for in a Joe figure. Yet, in the '85 series he really doesn't get much love or recognition, not even from me. His one follow up figure, the Slaughter's Marauders travesty from '89 doesn't really improve things...now, we finally get a new sculpt update to our second Infantry Specialist...and how does it work?

Fair. Not great, but fair.

Over the past few years, it's almost looked like we've had two Joelines running concurently with each other...in one two-pack we'd have a couple of incredible sculpted, nice proportioned, awesome looking figures. Then in the pack next to it, a figure would have 4 foot legs, a 6 inch torso, and stubby little arms. This syndrome has almost ruined some potentially terrific figures (Wave 7 Night Creeper, Wave 1 Alley-Viper, etc...) and it affected the Valor Vs. Venom Shipwreck pretty badly, too. And unfortunately for Footloose, that's who this figure is based off of.

The most painful thing is, like the figures mentioned above, the basis of the mold is GREAT. A nice, well designed military vest...some great, basic military pants...a nice looking soldier figure to be sure. It should be perfect for Footloose...but the long legs and short torso really take some points off for me and make this a figure I might not even be able to work into my roster.

The sculpted web gear looks nice...it really does. And the headsculpt with moustache look really nice and accurate, too...this definitely looks like he COULD be Footloose, and works in that regard. Hasbro did put some nice longer arms on the figure, so that does slightly compliment the leg problem a little bit, which is great, but ultimately, this figure is still a little tough to take seriously...especially when compared to stuff like Barrel Roll, Salvo, or Major Barrage from Wave 1.

This review is going to seem like the opposite of Barrel Roll, where the only issue I had with the figure were his paint apps. Here, it's the high point...kinda. Footloose comes in your basic jungle troop colors, which work great for me. A solid, dark green uniform base with a nicely tan webgear and pouches. The black vest underneath works well off of the green, too. It all looks nice and realistic...but you guys know how I love those funky color schemes, and Footloose does come off a tad bland. The green, brown, and black are pretty much all there are, and while that does work nicely in a "real world" kind of way, I wouldn't have complained about seeing at least a little bit more color-wise. Still, though, for an essential jungle infantry troop, he's got the exact paint apps he should...so really I shouldn't complain. The camouflage pattern on his pants also works pretty well, and again, I really cannot complain too much.

Hasbro really seems to be pulling out the stops for their DTC line, even when they re-hash accessories. For Footloose we get a nice helmet (the one that came with Rollbar or Switch Gears, I believe) a great backpack, knife, web belt and the absolutely terrific take-apart machine gun that came with the Wave 4 Duke way back when. Every single one of these accessories makes perfect sense and compliments the foot trooper to perfection. I can't think of any additions to this I could come up with, and all equipped, Footloose does look pretty cool, even with his proportion problems.

Footloose is a character that didn't really get a whole lot of love from me or anyone else over the past 20 years, and unfortunately this figure doesn't give me a big reason to change that. It's got some nice elements, but ultimately the proportion issues of the last few years have carried over a little bit and affected my opinion of this figure, especially when he's put in the company of the other terrific DTC offerings.

He's still a decent figure, but probably gets my lowest ratings of the wave...sorry, Footloose. 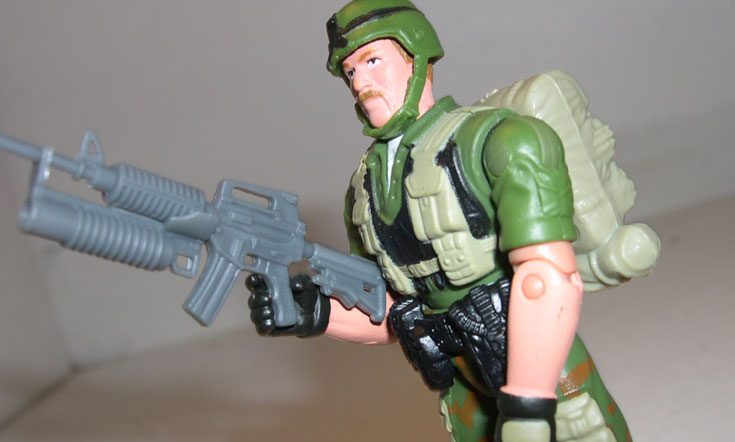 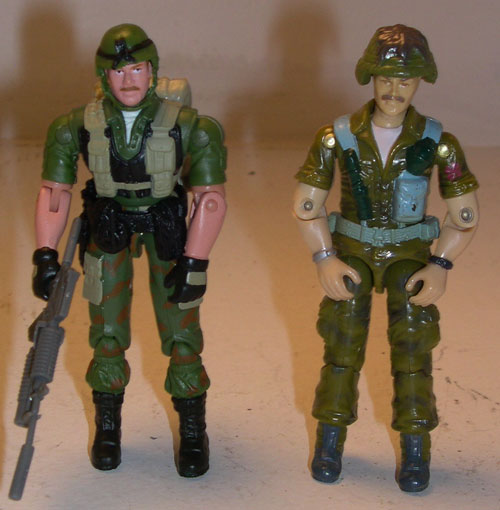 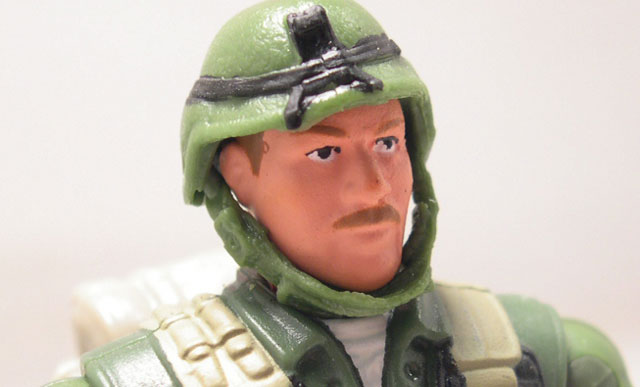 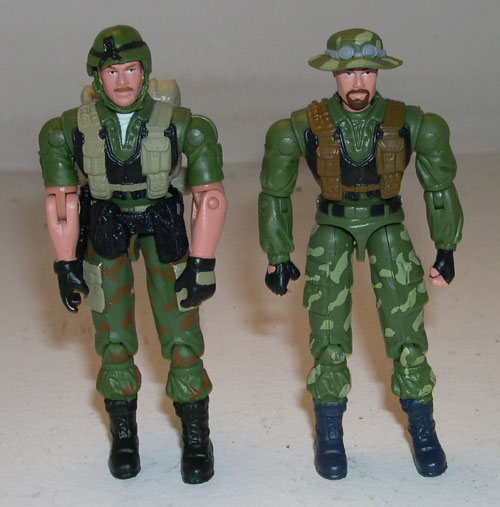