Here, for the first time, we see Hasbro really take a different approach to the exclusive 6-packs of days past. Where the Toys "R" Us exclusives were geared towards the collector with classic sculpt repaints, now that Hasbro is in control of the 6-pack format, they're free to mix things up a little bit. So they definitely mix it up, and it has some limited success.

I've gone on the record as saying that I'm not a huge fan of B.A.T.'s in general. I much prefer the human element and how flesh and blood people interact and conflict with each other than merely toss robots in the mix as pure cannon fodder. However the vast number of different B.A.T.s out there has kind of broadened their appeal a little bit and given us a great mix of interesting figures over the past few years. The B.A.T. Attacks set continues that tradition. 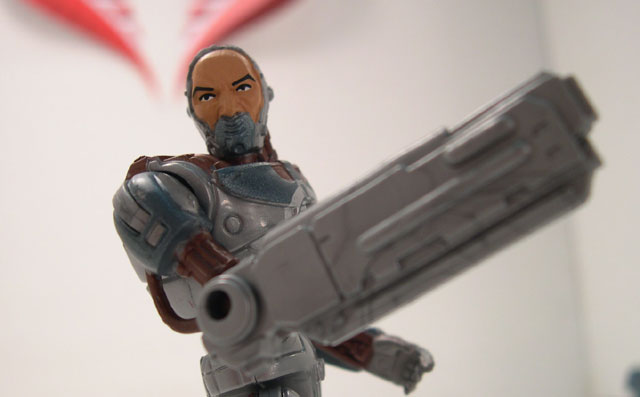 We'll take a look at Overkill first, who's gone from a pretty obscure, forgettible 90's figure to a pretty core, central character in the whole G.I. Joe and COBRA mythos. He was originally a robot and has since become more of a cyborg (with a pretty critical relationship in the Devil's Due comic) and now he is the defacto B.A.T. leader and wannabe leader of COBRA. As it turns out, the figure is actually pretty nice. While not quite as interesting as the Spy Troops/VvV Wave 4 version was from a purely asthetic standpoint, this version is a bulkier, more down and dirty, threatening version, with an obviously solid robotic torso, powerful looking mechanical limbs and plug in-plug out swappable componants for quick battlefield upgrades.

This version is merely the same version as was available in Wave 7 of Valor Vs. Venom, but in a more metallic silver color, and the color change does work pretty well. Hasbro also snuck in an arm missile launcher to spice things up a little bit, and it does to a limited extent, although the arm has no elbow joints or anything and the launcher just kind of ends up stuck on. Still, it gives him a pretty nice, high caliber weapon, and makes him even more dangerous than he was. I still far prefer the gun-arm, but the option is nice.

Even though Overkill does not have the standard O-ring articulation/construction, he still manages to retain most of the functional movement, with the exception of some torso motion, and of course the swivel arms. All in all, the figure is pretty effective. I'm not sure the mere addition of a rocket launcher and the color change is enough to warrant the upgrade, but it makes sense to put him in this set and works for me. 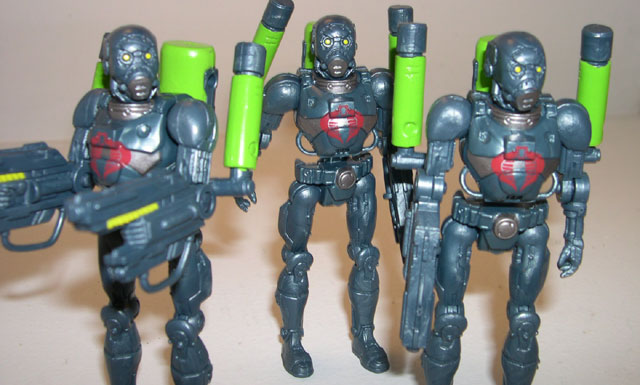 Next we've got the new B.A.T. 5.0, and personally, I LOVE this version of the B.A.T. Even though I really don't like the B.A.T. conceptually, there have been some neat figures recently, and this tops the cake. While I'm a huge fan of the most recent sculpt (and seemingly the only fan on the 'net of these figures!) in a more commando/recon capacity, these B.A.T.s seem more all-purpose and more functional. It doesn't hurt that they look just as they appear in the Sigma 6 cartoon, which practically guarantees that Gonzo was originally producing this feature (at least the first 5-parts) as a 2-hour movie to focus on the 3 3/4" figures rather than the new Sigma 6 figs.

The most interesting aspect of this new B.A.T. is, without a doubt, the head sculpt. While I actually prefer the "Ultron" look of the previous headsculpt, this one looks pretty neat, too. A very skull-like, round head with those two piercing green eyes gives you a very sinister, very artificial look, which really works. The body style is very blocky and robotic, like Overkill, yet the torso and other parts are slightly modded, so while similar, the figures are very definitely different. As different as the figures are, however, they still tie immediately together, and make these B.A.T.s almost seem like Overkill's personal squad.

Immediately when you look at the figures, you see those pesky green "Venom tanks" perched on their arms and their backs. The ones on the backs are removable, but the arm-mounted ones, sadly, are not. It's not a huge deal, but it's kind of odd to have that green tank constantly flopping around back there. It works as a power source, but it seems kind of clutzy.

The arms in general are another sore spot as they are extremely stubby and somewhat loose jointed. The regular robot arms look almost terrible...they are so short and the hands are barely functional that I almost hate even having them on there. I'd almost prefer to have every B.A.T. suited up with twin gun-arms, because the gun arms are just plain GREAT. I don't see much of a reason for the B.A.T.s to be grabbing and using equipment anyway, so that works for me. Unfortunately, there are not enough gunarms in the pack to go around, but it's a nice thought, anyway. ;) 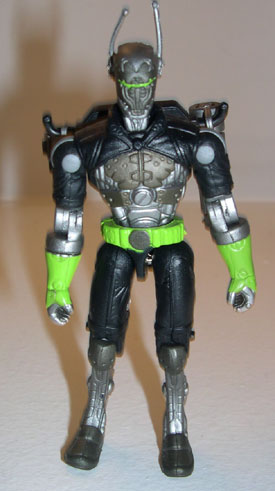 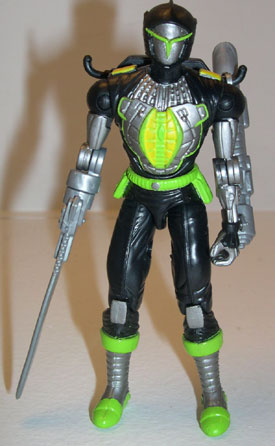 Rounding out the set are one each of the two previous new sculpt B.A.T. molds, each done in a more "venom green" color scheme, which actually work better than I thought they might. Rather than go over them one-by-one (since I've reviewed each figure 3-4 times already in the history of the site) I'll just round them up in general.

The newer sculpt version of the B.A.T. is one that I actually prefer over the older one, even though I do admit that the original new sculpt B.A.T. is tall, menacing, and very, very cool. Still, I love the small, fast, lightly armored version of this new B.A.T., and this new version is a pretty decent one, even though we've gotten him several times in the past year. The head sculpt is still a beauty, and I don't care how much it looks like Ultron, I still dig it. The nicely sculpted robotic legs are another plus and the detailing on his chest is really cool. His larger arms/gauntlets give him a more functional look, and all in all, I just think he looks really cool. The light green trim on his arms and belt is very subtle, but nicely effective, not looking too bright, but at just the right shade to tie him into this set nicely.

The taller, older sculpt B.A.T. is also very nice. I had kinda grown out of using that taller sculpt B.A.T., but getting the figure in this set has changed my mind and made me a lover of the older B.A.T. once again. He is tall and intimidating, and looks just plain scary, even with a lack of real robotic details. The scrawny metal arms reveal his android backstory, and even the lack of a swivel arm doesn't hurt the figure too much. His green highlights are also used sparingly and effectively, and he fits in with the set pretty perfectly.

A nice assortment of accessories come with these two B.A.T.s, with two of the familiar hook backpacks and a couple of arm-weapons each. The coolest thing is both of their arms are formatted so they can each swap weapons back and forth and can each use each other's arsenal. A very neat little touch.

All in all, this set is a big departure from the norm, and that's what I like. I hate to say it, but Hasbro was quickly running out of ideas with their classic sculpt exclusives, and this is a nicely different set that has some appeal. It's especially nice to see some new sculpts in there, too. However, I'm still not sure we can expect this type of inginuity for long...mold limitation isn't just an effect on the TRU sets, and eventually Hasbro's DTC stuff will start running into these issues, too. Not limiting themselves to classic sculpts will give them a lot more options, but ultimately the classic sculpt collectors are going to want more, too. It will be interesting to see just where Hasbro goes with all of this. Personally, I love the three new sculpt B.A.T.s, and the other figures in the set are nice enough to recommend a purchase. Not a mind-blowing set by any means, but a quality new sculpt 6-pack, and a solid effort overall. 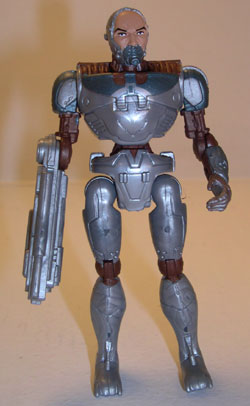 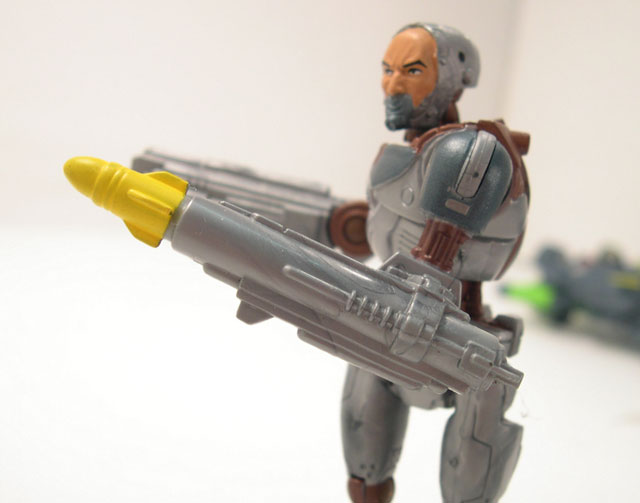 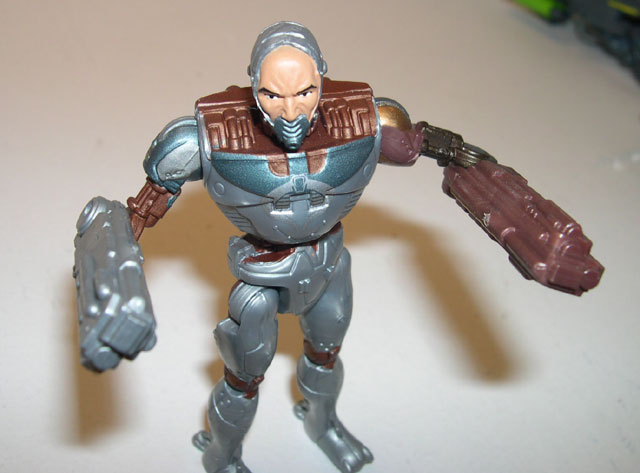 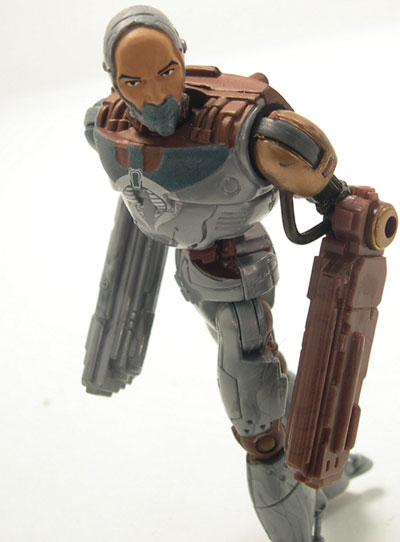 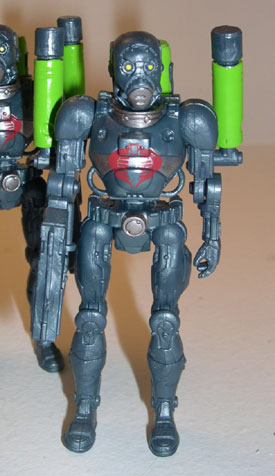 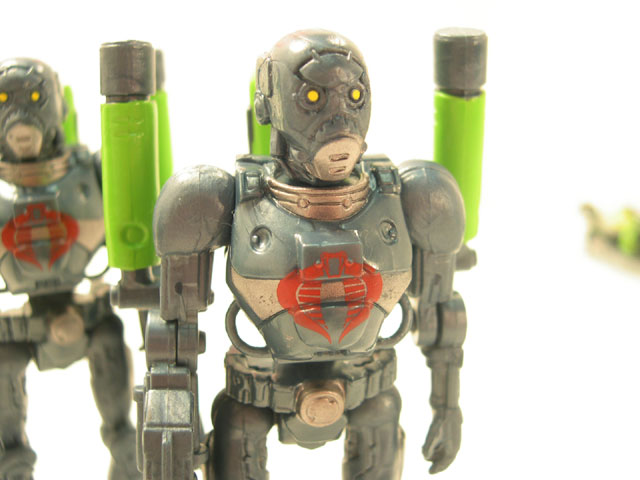 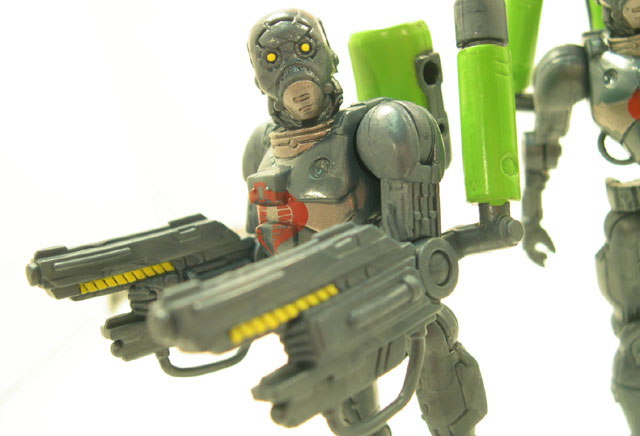 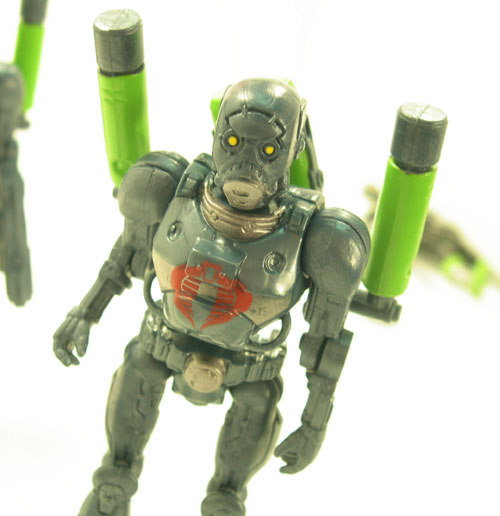 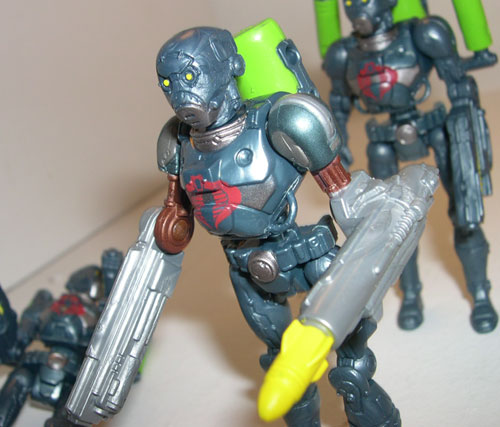 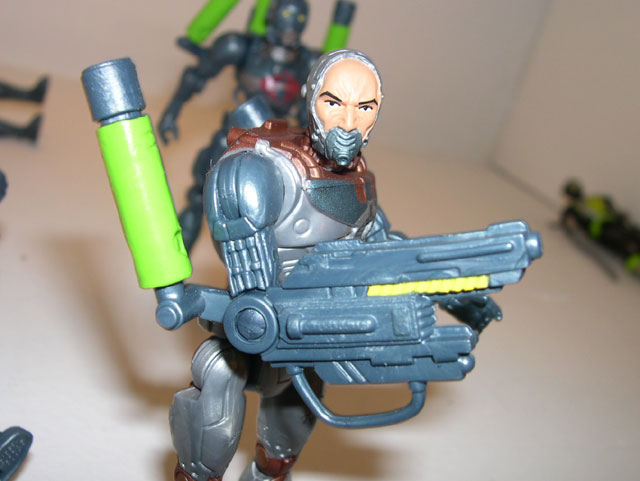 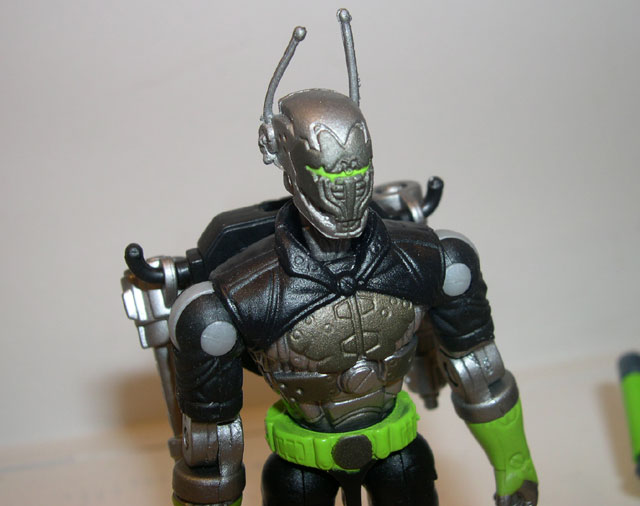 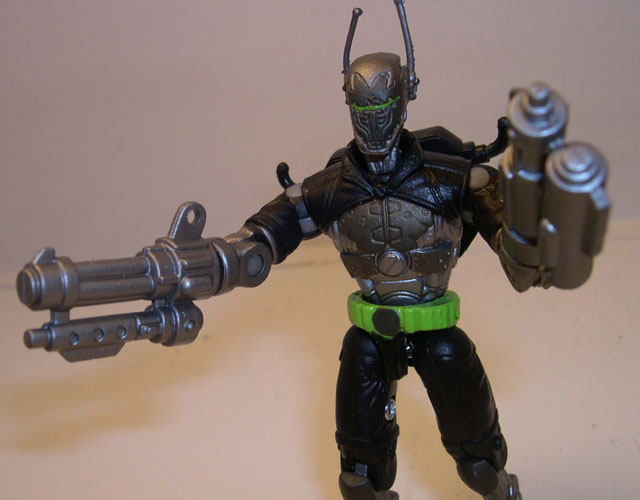 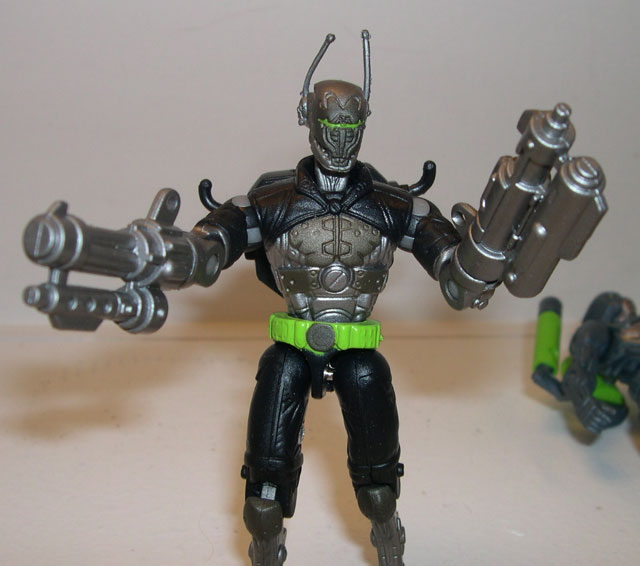 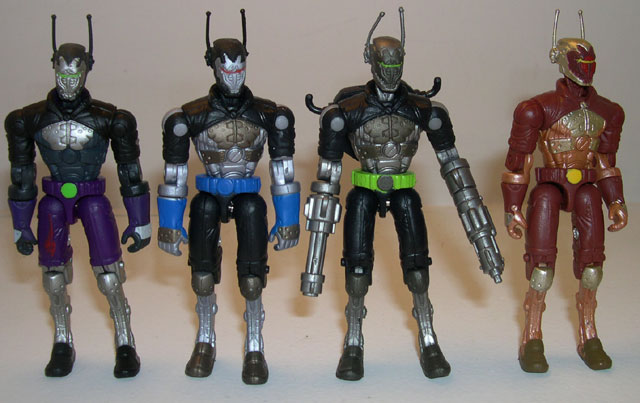 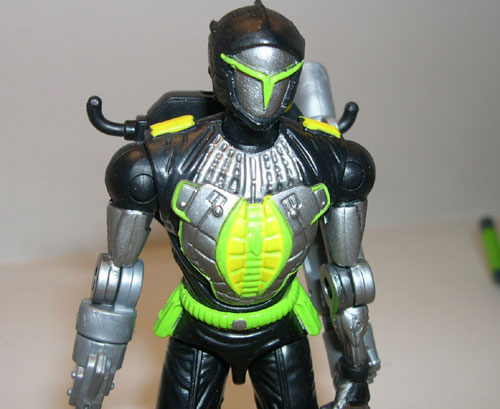 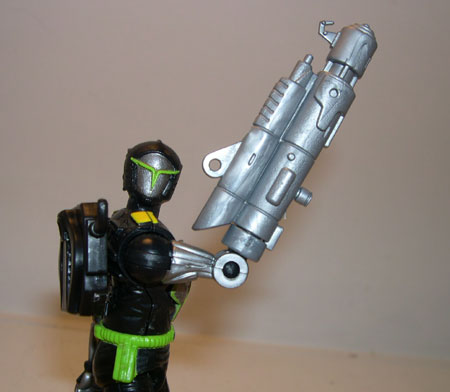 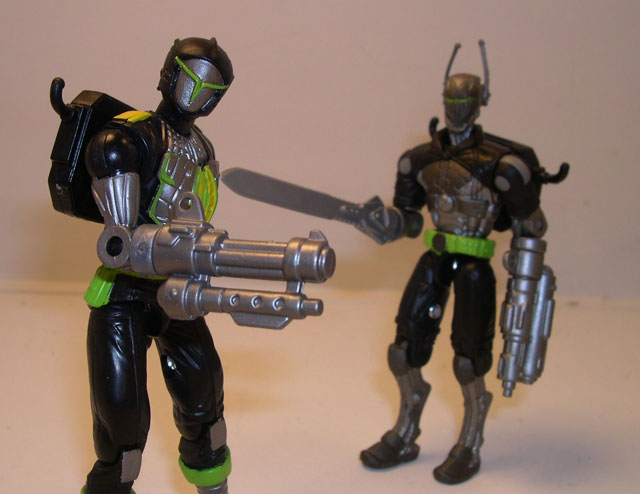 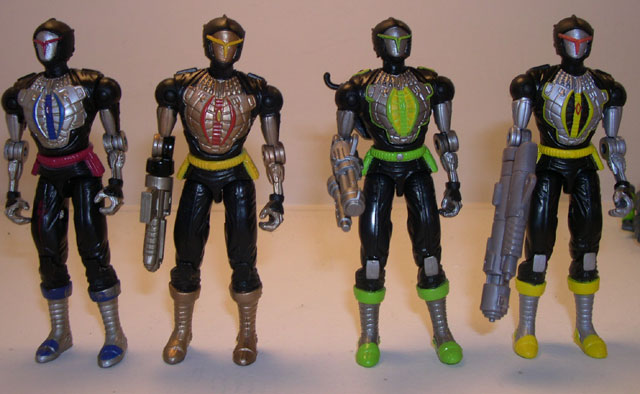