Well, it took forever, but the elusive Issue #9 comic pack has finally been released through Hasbro's Direct to Consumer online store. The subject of many a rumor and hypothesis over the past year or so, it was assumed that this pack might just never see the light of day. Well, it took a while, but here it is...but was it worth the wait?

Joe fans have been anxiously awaiting the chance to complete the original 13 members of the Joe team from back in the good old days...sitting there patiently, hoping that their personal favorite might just make the cut. So far we were off to a pretty decent start, but there were a few glaring holes...Scarlett and Breaker among them. Were those holes suitably filled with these figures? More or less, I suppose. 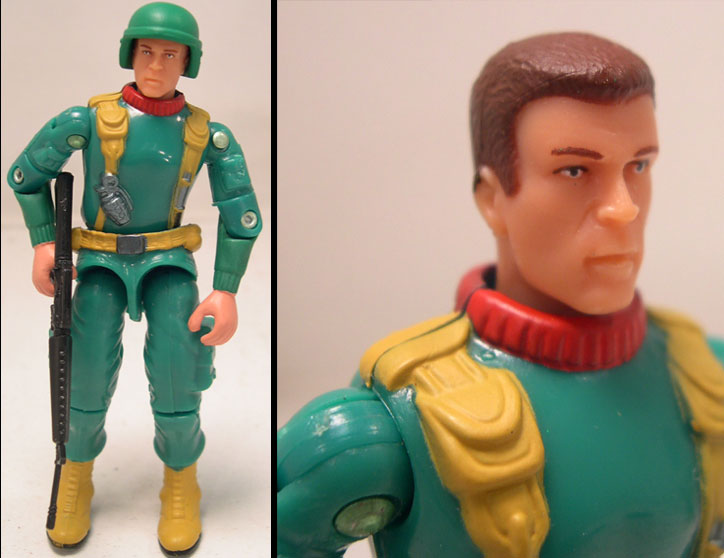 As I've said many a time throughout my reviews, even as a kid I got bothered by the fact that some of my favorite characters looked so different on the page compared to the piece of plastic in my hand. I can understand the reasons...there were limited molds for the first year of Joes to pull from, yet they wanted to make them as different as possible in the books. So Zap got his moustache, Short Fuze got his glasses, and Breaker got shaved. I can't really express how much this bugged me as stupid as it might sound, and here so many years later I finally have a beardless Breaker. And realistically, it's probably my favorite figure of the three-pack.

Breaker's head sculpt goes along with the rest of them in these comic packs and looks very nicely sculpted and a huge improvement over those melon-headed '82 era figures. Much more nicely sculpted, much more realistic looking, and I like his hair pattern as well. The face looks more like Breaker, and the removable helmet helps even more.

The body mold itself is dated, of course, but fits in with the rest of the '82 era comic packs and Breaker fills a decent hole. Yet, I kind of find it hard to get excited over these figures at this point. As nice and novel it is to have a comic-accurate representation of the first communication officer on the Joe team, this really isn't a whole lot of figure that we haven't had before. He's nice, and he'll fit in well with my other original 13 (or 8, I should say, as I was waiting for Breaker and Scarlett, and proper versions of Grunt, Flash, and Grand Slam). The o-ring inside fits kinda sloppy and the figure doesn't knock me out...but it does serve it's purpose.

The weapons kind of hurt the figure a little bit, too, I think. His removable helmet is just great. It works really nicely, fits well and looks great, but without his helmet-based comm gear he just doesn't really look like Breaker. His only communication device is a small walkie talkie, and that doesn't really work for him.

In essence, Breaker works for what he is, and will fill a nice gap in the original roster, but as a new and revolutionary figure, he leaves me somewhat cold. Still, that's not what these comic packs are for, and essentially this is still a successful figure, nostalgia-wise. 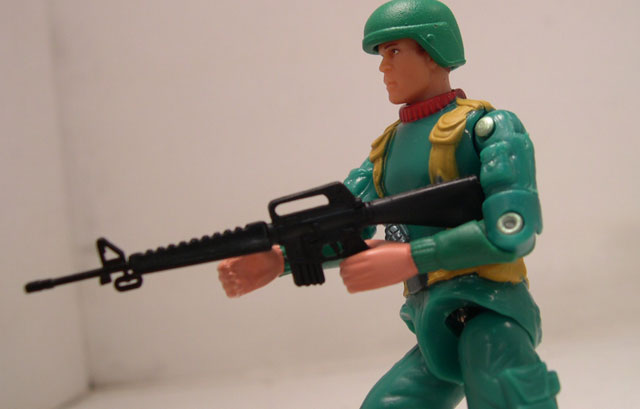 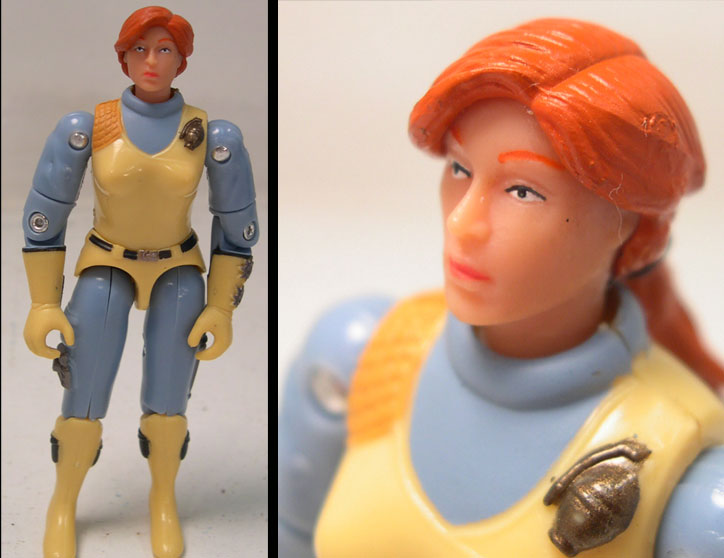 Finally!! Finally, finally, finally! It took 'em over 20 years but we finally have a classic era Scarlett with a nicely sculpted head and a PONYTAIL. Who would have thought it would take so long for Hasbro to find this formula? Who would have thought that one of the most sought after classic era figures would then still be delayed while fans sat on their hands waiting and waiting for the rumored Chinese factory to release these elusive molds.

I'm not sure if we'll ever know the full story behind these delays, but the fact is, the figure is finally released, and ends up being a pretty nice product...but not quite as perfect as it could have been.

First of all, the head sculpt looks NICE. Scarlett actually looks like a female, but she looks like a tough, soldier-type female, and someone who can hold her own against any opponant, male or female. There is some very nice detail work in there, and it looks absolutely worlds better than the previous incarnation. The hair is pulled tight into a nicely sculpted ponytail and works great...but the head is real small. I mean REAL small. Hasbro is obviously monkeying with the head sizes a little bit with these new sculpts, mostly because a lot of the old heads were so huge. But in Scarlett's case they almost went too far and make the head too tiny...I mean you can practically see a gap between her torso and neck joint. This effects how the figure looks, but ultimately, you're so happy to have a ponytailed classic Scarlett figure that it doesn't even matter all that much.

The body, as usual, looks nice, even if somewhat dated. Back in the day, Scarlett's uniform was about at fancy as it got with the tight tank top/leotard type combination with the red grid shoulder pad, tiny wrist-mounted pistol and throwing stars and the high-heeled combat boots. It was pretty futuristic for the early 80's, but still worked well. It definitely looks it's age a little bit these days, but it's so much a part of Scarlett's identity that it still works. There seems to be some new detail in the mold this time around, with some beefier limbs and some extra wrinkles thrown in...some little touches to make it more realistic, but it still retains that classic element.

The colors on this uniform are a little on the different side...obviously throughout the comics, the colorists had their own take on the Joe uniforms, and Scarlett's was often hued somewhat differently, compared to her deep green figure. So, with this version of the figure, we end up with a very light blue uniform base, which works, but just barely. A little bit brighter would have been TOO bright, but as it is, it represents the figure well and looks nice and different.

Her accessories are kind of odd, but work within the story. At one point in the comic, Scarlett tears through a plate glass window on a pair of skis to stop an assassination attempt...Hasbro is attempting to recreate this by including a newly sculpted set of skis. They actually retooled the skis and retooled some holes in Scarlett's heels to fit them. Unfortunately the size of Scarlett's heels are such that the holes created are not large enough for actual standard footpegs. They basically just work for the skis. :/ I'm not real sure why this level of detail was placed on such a small element of the pack...I wouldn't think this would be a hit or miss aspect of the comic pack, but it shows some attention to detail, which is always a good thing.

All in all, I've been waiting a long time for a Scarlett like this, and I'm finally getting it. It's not perfect, but it's still pretty darn nice and will look great next to my 125 Snake Eyes figures. Maybe they can all fight for her or something... 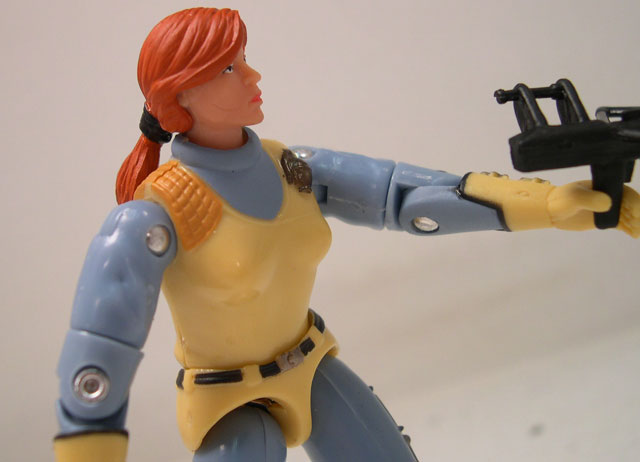 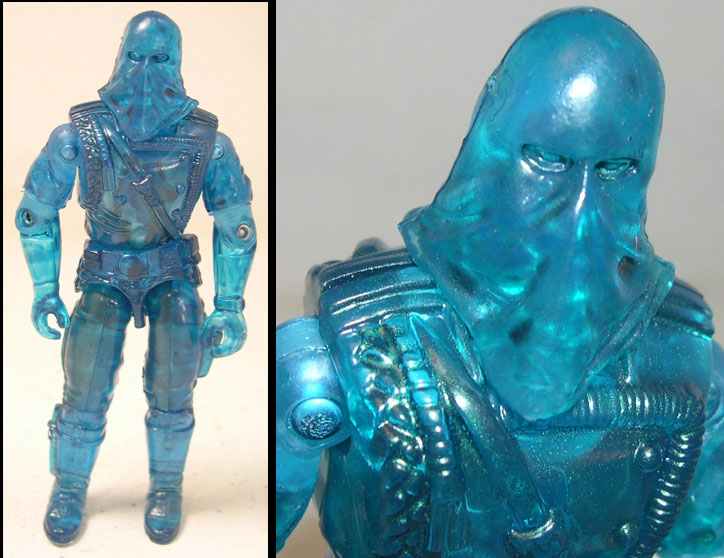 Comic accurate? Yeah. Kinda nifty? Maybe. A little strange? Definitely. At all useful in my Joeverse? Not in the least.

It's hard to really cover this figure in too much depth, just because I really don't care about it a whole lot. Lots of folks love the clear figures (I'm lookin at you, Prozac, you weirdo!) but they don't really matter to me one way or another.

Truth of the matter is, COBRA Commander DOES show up as a hologram in this issue...and this figure pretty nicely represents that, using the comic pack figure mold from way back in issue #1. But I can't reasonably say that I would ever find a use for this figure in any element of my Joeverse, so I'm not sure how happy I am to see it. I've dug a lot of the comic pack figures because I'm starting to create a pretty nice looking "classic Joe and COBRA" shelf, which looks pretty snazzy with all of these retooled figures...but really, this hologram figure has no place on that shelf and I probably would have rather seen some other mainstream, "real" characters get their place in the sun.

Still, the mold is nice...the transluscent blue plastic looks pretty neat even if it doesn't really "work" for me. Ultimately, the figure is a neat little keepsake, but not something I will find much use for. He's definitely my least favorite figure in the set and starts to tread kinda close to the Star Wars syndrome, where we get figures of single scenes or elements in the movies that really can't be used in many other places. That's kinda where I see this figure. 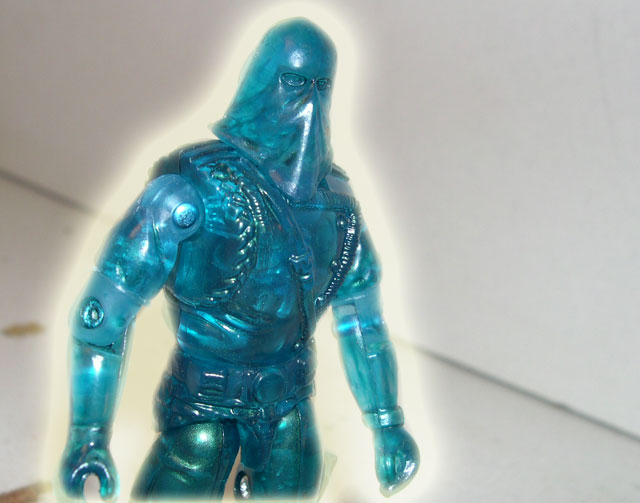 Ultimately, I kinda dig this comic pack, I guess, mostly because it fills a couple holes in the original 13 lineup. The updated Scarlett has been a long want, and it's cool to get Breaker as he should be as well. COBRA Commander isn't my thing, but I don't think he was meant to be the main draw of this pack, and I think it works well enough. Was it worth the long wait? Yeah, I suppose, although nothing blows me away, the two Joes are nice additions and will work well among their comic pack brethren. 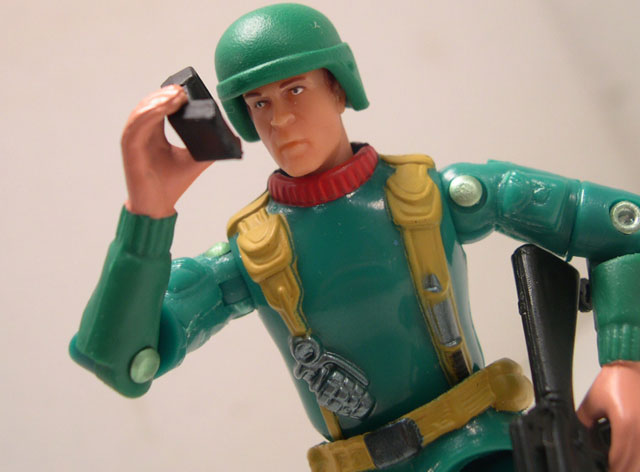 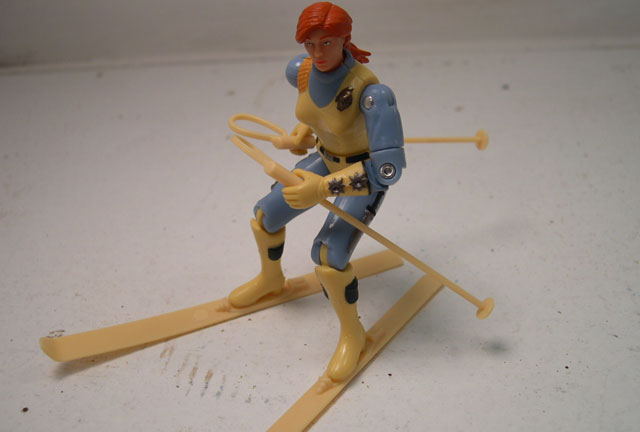 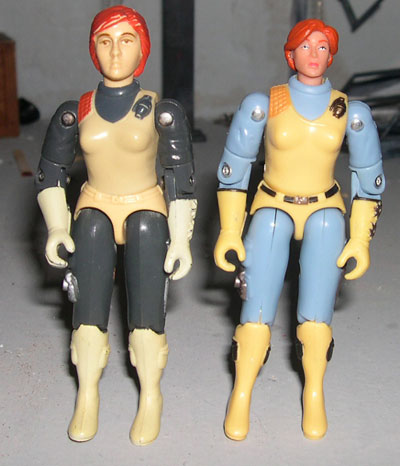 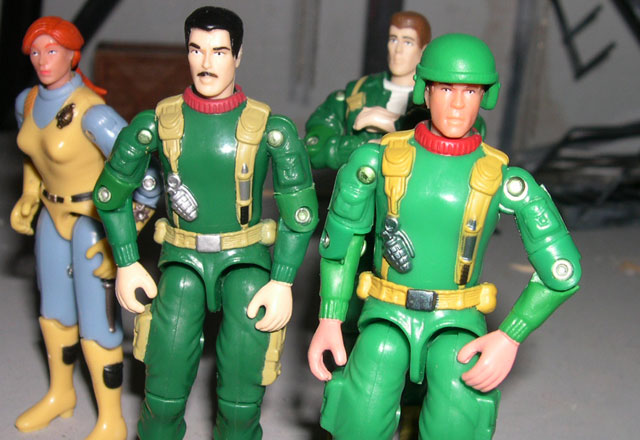 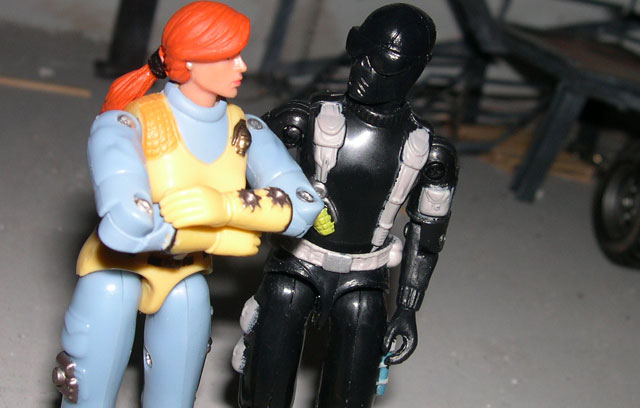 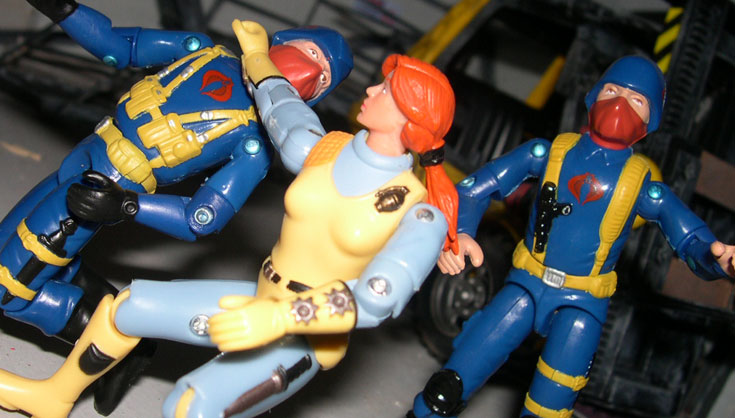 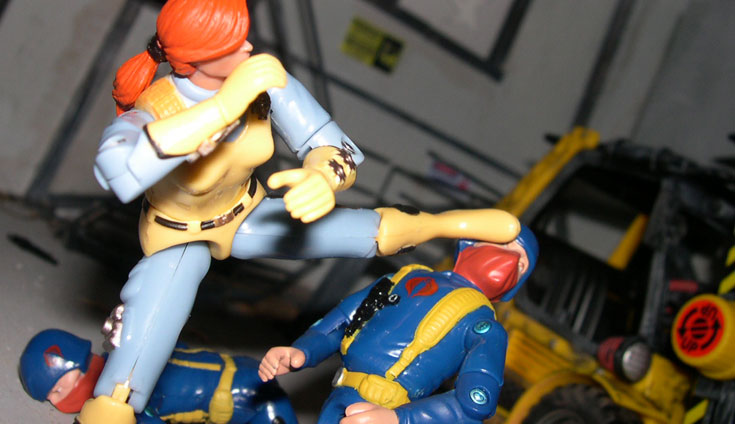 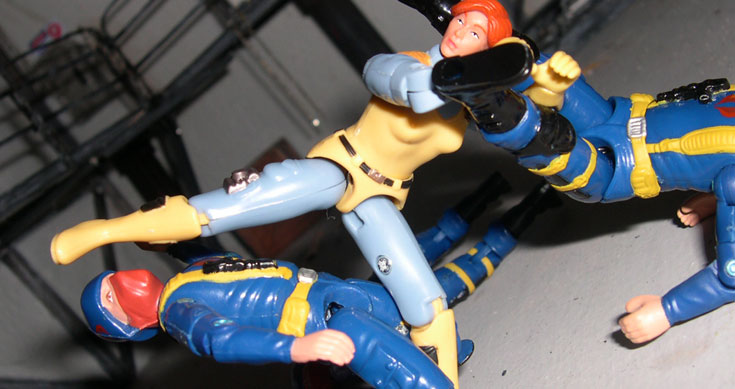 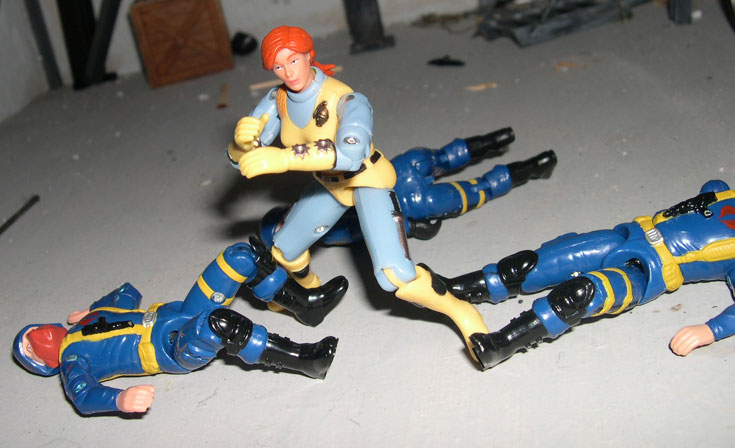