Kind of an interesting approach that Hasbro is taking with some of these most recent comic packs. It seems almost as if they're taking a stronger focus on book continuity than really making interesting figures...not that these newest comic pack figures aren't still nicely produced...they are. But Hasbro's pack-in comic has been part of the COBRA Civil War for 3 out of the past 4 comic packs (and the fourth one was a carry over from a while ago) and they seem like they're trying to work their figures into that story rather than try to come up with good characters first and work the comic around them.

Doesn't really matter a whole lot to me, I guess, but it is kinda neat for those folks who don't have those classic Marvel comics to kind of get a run together. This is a good issue, too.

Now, I've never really been a Dreadnok fan, as most of you should know. I despise comic relief in pretty much any media, be it movies, TV, or comic books, and it seemed like in the cartoon primarilly (although in the books, too, especially near the end) the Dreadnoks were used mostly for comic relief. This diminshed their threat potential in my eyes, and as a kid, it actually made me like them less. It also didn't help that the first 3 figures had huge, oblong melon heads and even the toys didn't look remotely dangerous. Well that part at least has changed. 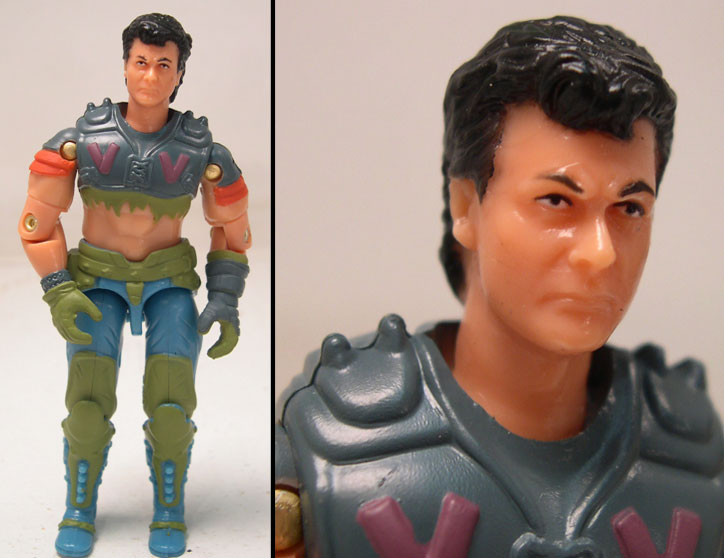 I couldn't quite figure Thrasher out as a kid...he had kind of a "Mad Max" thing going with his football/rugby pads and torn uniform, but his head was just so darn goofy looking that I couldn't get past it. The Elvis-esque hairdo with the green stripe, and the just plain weird facial sculpt just did not work for me and did not make me fear Thrasher or take him seriously.

Thankfully, the comic pack edition takes huge steps to improve on that by giving us a very nicely sculpted head, which actually looks a little mean and intimidating. The facial sculpt is well-detailed and looks almost angry, as Thrasher should. His hairstyle still retains a very 80's look to it, but it's a lot less Elvis and more realistic.

The rest of the mold still sorta throws me a curve ball, with those strange pads and torn clothing, but ultimately the scaled-down head helps the rest of the body look larger and more powerful. I can actually see Thrasher overpowering someone now, not just sitting behind the wheel of the Thunder Machine where he's as invisible as possible. I especially like how his padded left hand is sculpted now, and it looks a lot bigger and lot more ready to smack some Joes around.

The colors of this figure are pretty far removed from how he was originally shaded back in the day, and these newer colors have a much more "comic book like" feel to them, which makes sense. The light blues and greens mix well with the dull grays and it all looks pretty authentic, and pretty animated.

His accessories don't amount to much, only coming with a single pistol and knife, but Thrasher was never really known as an accessory guy (and these are better than that messed up lacrosse stick/club he came with before) so this isn't such a big deal. All in all, it's a decent update and loads better than the original, even with just a few minor changes. 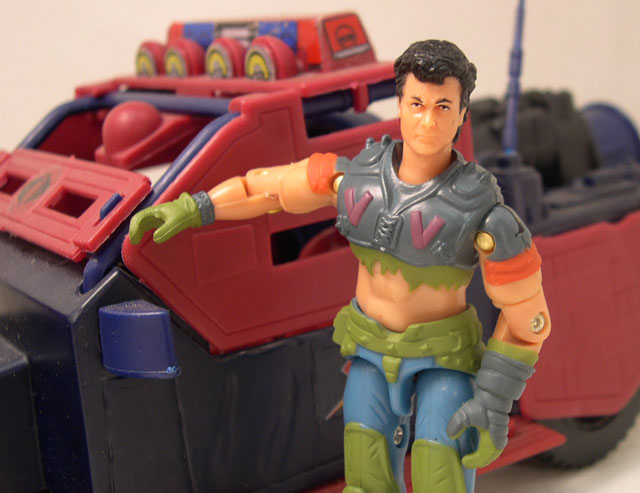 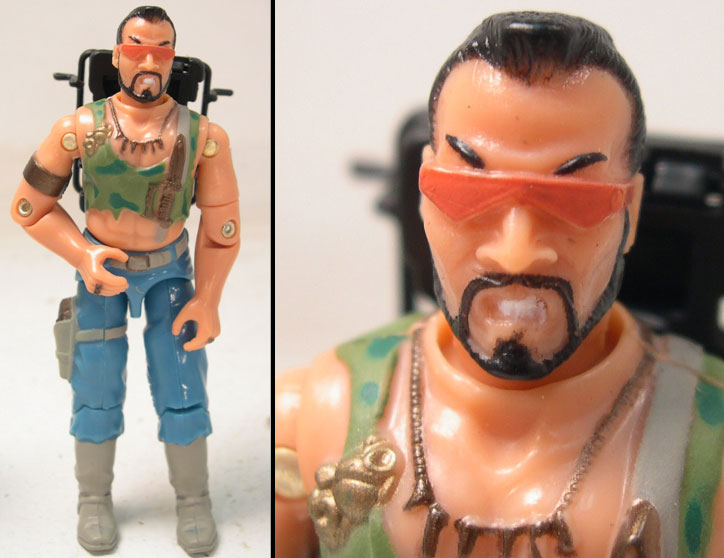 Back in the day, Ripper was definitely my favorite Dreadnok, even though he didn't really do a whole lot. I don't know if it was his camouflage shirt, his funky mohawk or his killer bladed machine gun that did it, but whatever the case was, I really loved Ripper. But still, like the others, he had his goofy looking head that really dropped him down a few points. Again, though, like Thrasher, that issue is definitely fixed with this figure.

The head sculpt has gone from goofy to downright mean with his menacing grimace and his somewhat understated hairdo...back in the 80's the mohawk was a lot more pronounced, but here it's a little flatter to the head and a lot more closely sculpted. The result is a more authentic and meaner looking Ripper...I really like the end result over all.

The body itself looks pretty nice as well, although it does look somewhat dated. A half torn sleeveless shirt isn't something you see all that often these days, but it still looks neat, and I still like the camouflage pattern. His knife on the chest and the plainly sculpted pants all work together nicely and comes across as a pretty realistic looking figure. No funky sports pads, no weird leg armor or anything strange like that, just a run of the mill biker punk with destructive tendancies. Nothing wrong with that.

Like Thrasher (and the bulk of the other comic packs) the colors are brighter and more "animated" style, looking like they were just pulled out of the pages, and the results are pretty nice here, too. The light greens, blue, and gray looks great together, but also works nicely off of the metallic brass coloring of his knife and arm band.

Ripper comes with an awesome set of accessories, pretty much everything he came with back in the day, including his very cool bladed machine gun that I really love. The backpack and jackhammer are still present as well, and I'm glad to see it. This is really a nice update to the original Ripper figure and makes the Dreadnoks not look quite so goofy. Considering I've never been a Dreadnok fan in the past, the small changes of these comic packs makes a big difference, even if it's really nothing new or exciting. 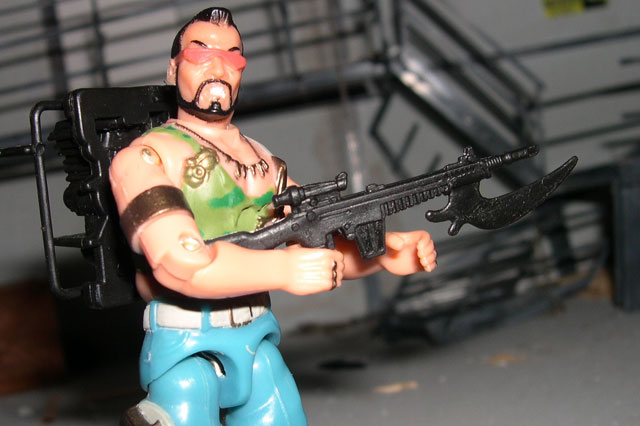 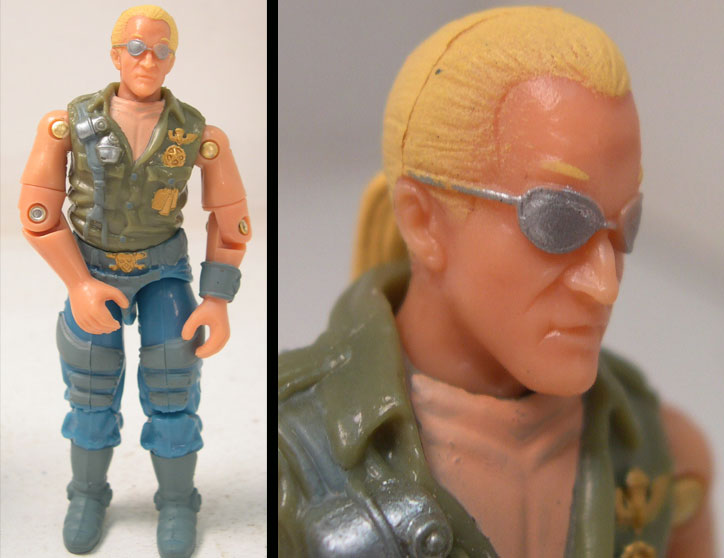 Buzzer, back in the day, was pretty much considered my default Dreadnok leader when Zartan wasn't around, mostly due to his treatment in the comics, which always showed him as being kind of the ringleader of the Dreadnoks themselves, and often even tried to usurp Zartan's leadership a little bit. As a result, he had a lot more personallity to me as a kid, but unfortunately his head sculpt looked terrible. Like the other Dreadnoks, his head was large and oddly shaped and he had a funky grimace on his face. His pony tail is kinda weird and his glasses just look off.

This new head sculpt? Wow, it's really, really, REALLY NICE. It's also really, really small, though. The comic packs are often treading that thin line between reducing head proportions to look more realistic and between making the head to small and almost pin-headed. Buzzer is a little too close to the "pin-head" syndrome, which is quite unfortunate, because the face and head looks 110% better than the previous version.

His face is slim and mad, which suits Buzzer well. The hair is meticulously sculpted into a nice, pulled back ponytail with some great detail and great life...the sunglasses, a pair of simple, round shades, look fantastic, and much better than those odd things in the 80's. Best of all, they work for a contemporary figure as well, and don't look too dated.

The rest of the mold is still its hit or miss self, though. Personally, I love the button down military shirt with the dogtags, shoulder strap and grenades...it looks really cool and seems to serve a purpose. I even dig the skull on the belt buckle...but the rest of the legs just look funny, especially with this new head sculpt. The legs end up looking pretty large against the rest of the figure, and that armor on the thighs looks almost rediculous. I never quite understood the logic behind those legs and I still don't...I don't really remember seeing even 80's biker punks wearing weird crap like that.

Buzzer is one of my favorite Dreadnoks personallity wise, and this figure does make up some lost ground from the first version, but man...I REALLY want to see a new sculpt Buzzer similar to the Torch figure that has already come out just so I can give him a little more street cred again.

The colors here are very similar to the original, but more comic-like again, which works fine as it did with Thrasher and Ripper. Buzzer also comes with the full compliment of his original accessories, which helps, too. Overall, a decent Buzzer, I'd say, and if you are a fan of the original, small head and all, this one should make you happy, too, as it's an improvement in nearly every way. 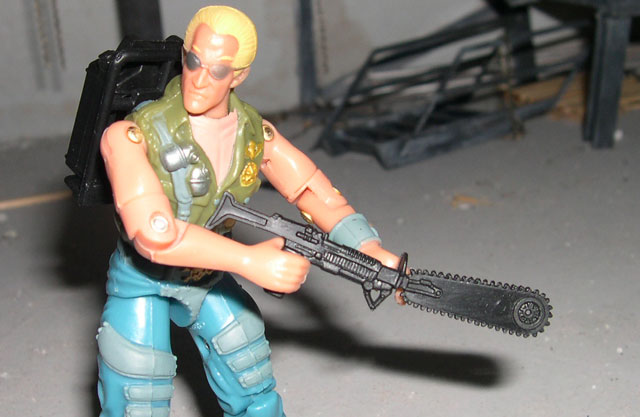 While I'm not too high on the Dreadnok concept, and while we've seen these molds already in the past year and a half (as Con exclusives) at least there are marked improvements in each of these figures. I'm still not sure I can heartily recommend this set, especially if you're not really a Dreadnok fan like me. The new head sculpts are improvements, even though Buzzer's is overly small they are all great improvements and look more contemporary and threatening.

One thing I do feel the need to mention with these figures is that for whatever reason Hasbro has decided to start using the clear rubber bands on their hands again. This didn't effect #9 all that much, but the Dreadnoks in this pack suffered from some varying degrees of "band hands" that had to be reformed. Just something to watch out for.

Overall, the figures are massive improvements, but they don't bring a whole lot new to the table that hasn't been there before, and the molds are nothing stunning. The new paint apps are pretty cool, the weapon compliment is nice and they look cool with the already released Dreadnok figures, like Zartan and Zarana.

Still, if you're not a Dreadnok fan, these may not be your cup of tea. 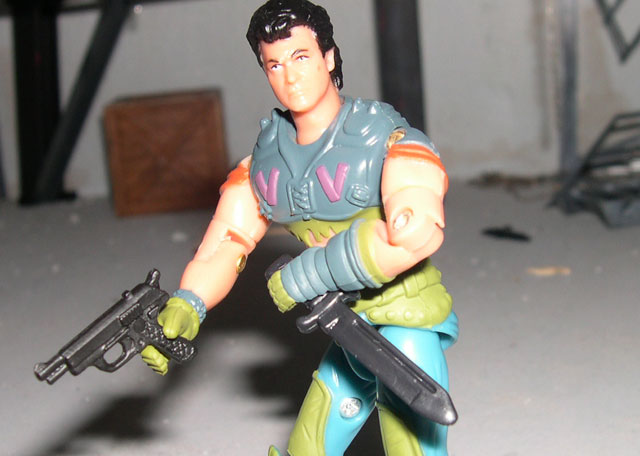 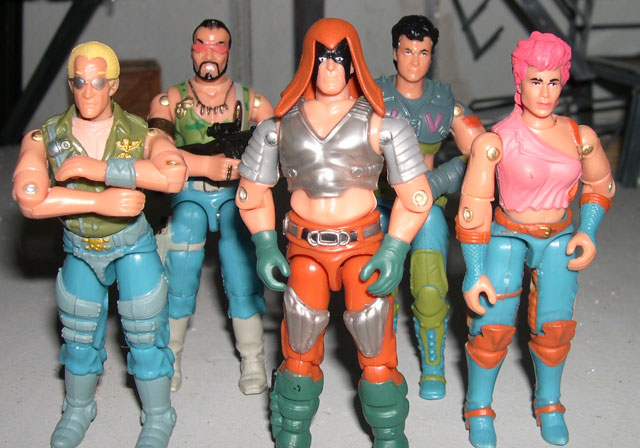 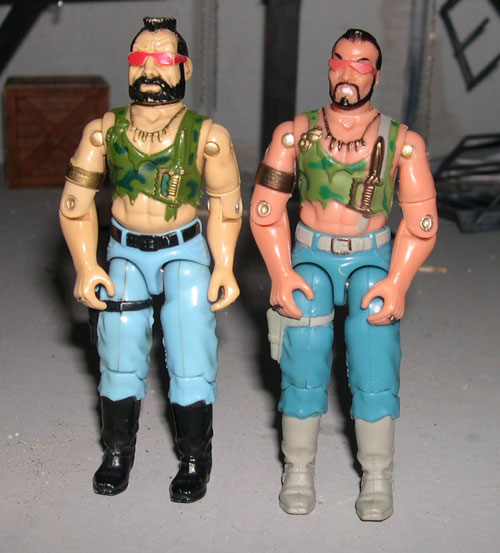 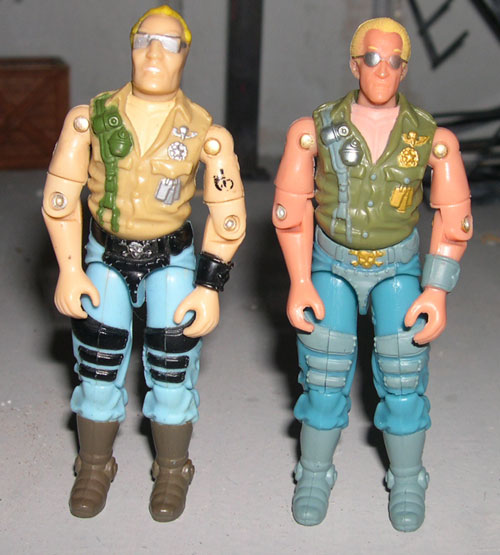 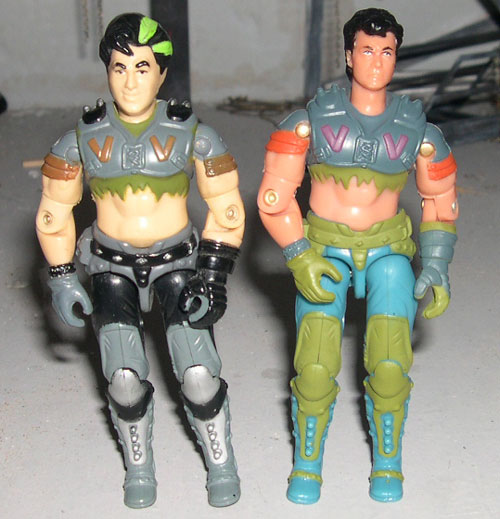 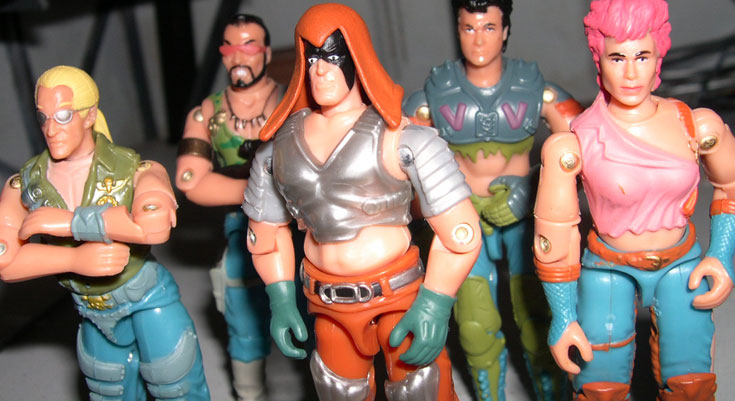