It wasn't long ago that it took no time at all to pick out my favorite figure in wave, and back in Wave 2, that figure was unquestionably Swamp Rat.

Proportions were still an issue with other figures, and colors had some strangeness to them even that short time ago...Swamp Rat just seemed to work perfectly and in my opinion really shined among that wave.

Where this figure was once the shining star of a wave, here he isn't really anything exciting. I'm not saying anything bad about the figure, by any means, but there is little about him to generate excitement when compared to amazing figures like Snake Eyes, Bombstrike, and even Gung Ho. Hasbro has made such strides in a short amount of time and this is a perfect way to really see how.

As I said, the mold for Swamp Rat is nicely in proportion, especially when compared to the figures from a few waves ago. Set against this wave of toys, he doesn't look quite so perfect in comparison, although the body size is still spot on.

As usual, the head sculpt is a terrific one, and a very nice focal point to the figure itself. Swamp Rat is a strange looking V-Troop and almost scary looking. The pale flesh, skin-bald head and attached mouthpiece just give a monstrous look to him and it really strikes me as pretty darn neat. I love the idea of COBRA experimenting with these guys to make them dangerous swamp troops, and this head sculpt looks awesome.

The body mold itself is equally cool, with a fairly skintight bodysuit...however the design scheme is made interesting by layered portions of the suit attached by those neat little clips that also attach the mouthpiece. These clips become a unifying feature of the figure and really look pretty cool, all throughout his uniform.

Bringing a little difference to the mold is the technologically advanced gauntlets...it isn't readily obvious what purpose they serve, but they look cool. Also helping the cause along are the twin knife holsters which hold some very cool little knives and help bring some color to the mold. The super-villain-ish bodysuit continues on down to the bottom of the feet, which is a pretty neat touch and I love the small round kneepads. All in all, the mold for this figure is just very cool and interesting, even if not that exciting compared to the dramatic sculpting of a lot of the other Wave 7 figures.

Perhaps my excitement for this figure is just dulled because he's become somewhat commonplace lately. After his original release, we also got him in single pack form with a much improved paint scheme. The single pack gave us a green and gray color scheme instead of tan and gray which is a much more swamp-oriented hue and looked a whole lot better. Well, in my opinion the Wave 7 version is yet another step in the right direction.

A black base with light green accents just looks really cool on this figure...it retains a semblance of swampy look, yet is nicely different from the other two versions. The light gray trim here and there is a neat throwback to the original, yet is almost too bright. I would have loved to have seen some black gear (like his poncho) and possibly brown instead of gray trim just to keep the color scheme a little more subdued. Still, it could be a lot worse and the overall color scheme of the figure is cool.

Swamp Rat is pretty well armed, as he always has been, however Hasbro only thought to include one of his two knives, leaving one sheath empty. I really don't understand why this was done. This weirdness aside, though, Swamp Rat comes with his normal machine gun, helmet, poncho, and tail whip and overall is decently equipped.

Tough call here. I still really like the mold of the figure, but amongst the rest of Wave 7 it doesn't look quite so exciting. Still, the figure is neat overall and a decent enough addition to the COBRA V-Troops.

He also comes with an absolutely amazing version of Snake Eyes, which you can't go wrong with...because of that figure and because this figure is still pretty neat, I give this pack a very high recommendation. 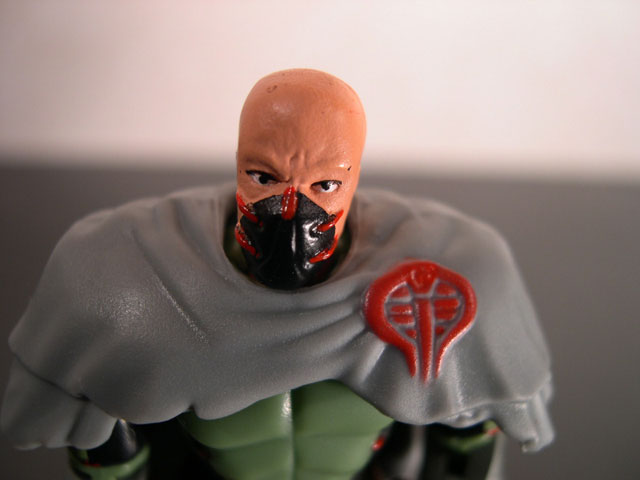 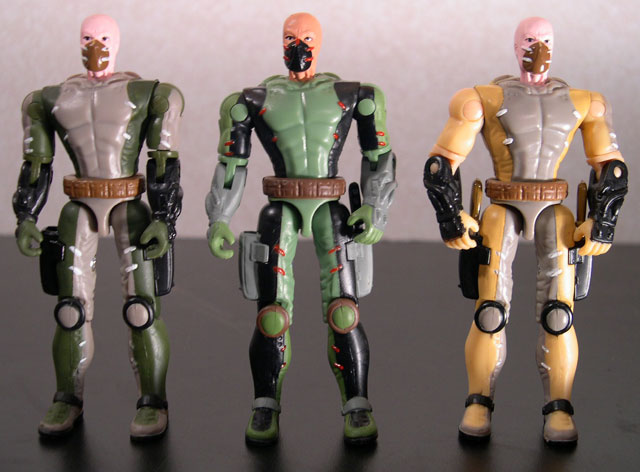