All right, all right...I'm sure you guys are all expecting it anyway, so I'll just come out and say it.

I like Croc Master. I've always liked Croc Master. I was probably the only Joe fan back in the day who was actually upset when he got killed! Ole Croc is the MAN. Chief of security and a frightening affinity for deadly reptiles, what is there not to like?

People often draw him into comparisons with Raptor and COBRA La, and I just do not get it. He's not an alien species...he doesn't dress like a bird or a croc, for that matter. He's a nasty looking COBRA operative who uses crocs for security and could mess you up! What's so funny about that?

Apparently quite a bit, because a lot of folks hate the character, concept, and figure. I don't understand it personally, but all that matters is we got us a Croc Master again! Not only that, but he's a cool one, too.

When it comes to animal-based characters, it really boils down to the look of the character. It's easy to go wrong with operatives trained in animal warfare, as you can quickly end up with a Raptor...a figure who dresses like a bird and ends up looking quirky and rediculous (actually, another secret here...I like Raptor, too!).

Personally, I don't think the original Croc Master fell into this trap. While you could definitely see the croc/reptile influences in his costume, I don't think it controlled the look of it. And this new version I think is even less led by his ties to short-legged water breathers.

I should start, as always, with his head sculpt. WOW. This guy just looks MEAN. His eyes are narrow and focused, with an almost green twinge to them...they have a steely hunter's gaze, perfect for a COBRA security operative and trainer. With an elaborate mouthpiece/breathing apparatus attached to his face and head, with hoses leading down into cavities in his torso, this guy looks like he could spend a lifetime underwater, only coming up for the kill, before slinking back down beneath the surface. Even with just a glance at his head sculpt, I absolutely love this character and figure.

Thankfully, the rest of the figure doesn't really disappoint either. He's got a broad, barrel-chest which looks nice and threatening. The reptile skin vest has an awesome pattern to it, and I love the way the airhoses drive down into it, going who knows where. Another neat touch is the tooth necklace he wears, very similar to Gnawghyde's back in the day...it immediately gives the impression of a hunter, only this guy is a croc hunting humans...not the other way around.

His legs are surprisingly plain, but with another touch of reptile skin at the hips that looks nice. Shirtless arms work well here, too, especially with the new shoulder design and elbow articulation. This figure is a combination of brutal simplicity and intricately detailed accents. He looks great and indeed looks like a "Croc Master". However, while the figure design is great, the mold itself has trouble fitting together. His torso is very barrel chested, his o-ring seems a little small, and his legs pull very tight into the body, making him look quite awkward. It's unfortunate, because the design of the figure is terrific, but the mold itself just doesn't allow as much freedom of movement that I'd like. Eventually I'll take the time to swap out his ring, and hopefully that will help, but straight out of the box, this is a downside.

The essence of someone being a master of crocs is to blend in with said animals. Croc Master's green base color works exceptionally well for that, really making him look like his subjects. The torso's different shades of green among the croc-skin patterned vest works beautifully. I love the gray pants as well, very subdued and very effective...the leathery brown of his boots caps off the figure with an additional touch of realism and excellence. Overall, there are no exhuberant colors...nothing really mindblowingly different, but each and every color works for what it is, and the figure as a whole works equally well.

Even Croc Master's skin itself has an eerie green fade to it, which makes him seem very sinister and quite interesting.

For Croc Master, this is a mixed bag...his pet croc is woefully small and non-threatening, although his new sculpt machete is pretty neat. Not a whole lot to comment about here, especially considering all of the excellent new weapons a lot of the other figures are coming with.

He does come with a black repaint of Ripper's machine gun/shotgun combination as well, which gives him some punch for his swamp adventures.

So what about Hasbro's "no dead figures" rule? Has it gone out the window? Not according to the filecard...turns out Croc Master is just another subject in a long line of Croc Masters, taking the helm when the predecessor leaves the fold. i have no problem with this, and am actually happy to hear Hasbro explain the return of this supposedly dead character. It works well in the new universe and this figure looks the part perfectly as well.

With this guy and Bombstrike in one package, you really can't go wrong. Definitely scoop this one up! 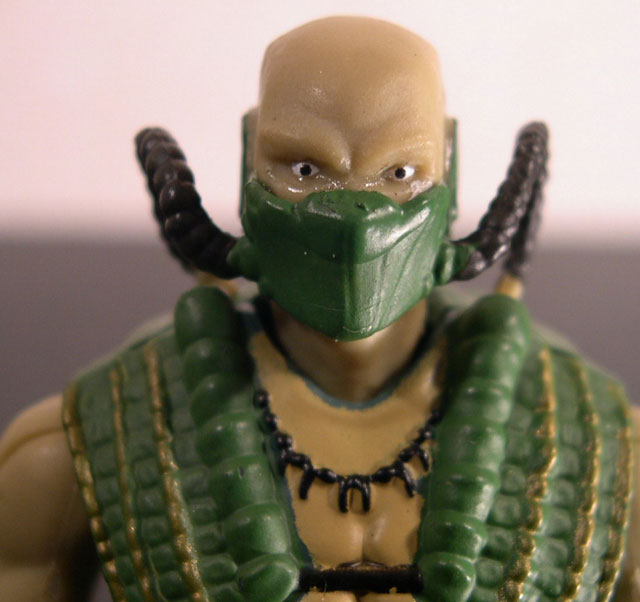 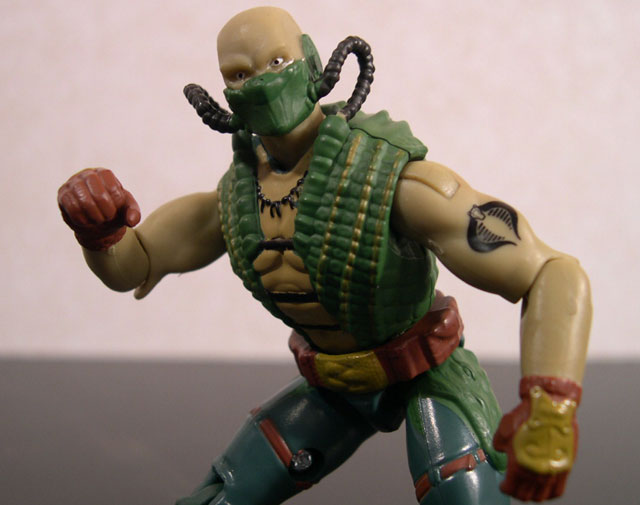 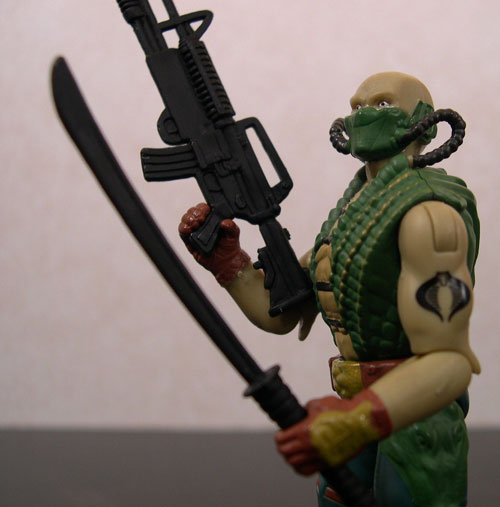 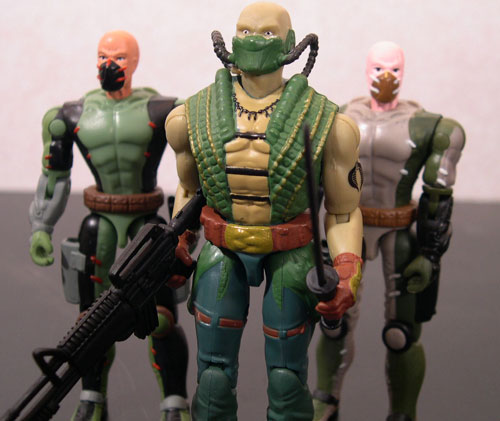