So, how friggen long has it been?

We started off with Scarlett, right off the bat. The Baroness came shortly thereafter, with Cover Girl. Lady Jaye showed up next, then Zarana, and finally Jinx. Is that it? Besides repaints like Volga, Vypra, and Chameleon, we really haven't gotten an established new female character in the Joeline in quite some time, have we?

The Joes started out as pretty much an equal opportunity employer until sales started to show a slide. Go figure...little boys didn't like playing with girl toys. I can actually vouch for that. As a kid my best buddy and I would meet and choose figures for the monster G.I. Joe battle we were no doubt going to have at his house that night...and the girls got picked last. Actually, even worse, the girls only got picked as accessories for the guys. Whoever picked Flint automatically got Lady Jaye. Whoever picked Snake Eyes automatically got Scarlett. I think we even threw Cover Girl in with Duke. Man, how cheuvenistic were we?

So, Hasbro picked up on this and as the line wore on, female figures became scarcer and scarcer...it's for this reason that I'm happy we're dealing with the two-pack format now. Don't fool yourselves, little boys still do not like playing with girl toys...I can assure you, without other figures being packaged in with the girls, they wouldn't be getting sold right now in these quantities either. So I'm glad we've got two packs going on...and Bombstrike is, too.

I can tell you one thing for sure right now...if Bombstrike had been a figure made when I was younger, she probably would have been one of my first picks!

It's no secret that my favorite sidestory to this whole new sculpt universe is the ongoing dynamic between Barrel Roll and Blackout. Well, when their stories first appeared, we heard all about the mysterious Cadet Bombshell...how would she tie into this, as their younger sister? Well, it's taken a couple of years, but we finally have a sister in plastic form! Her name has changed, but the idea is the same, and not only am I happy to see her for the sake of that storyline, but the figure itself is pretty darn nice, too.

Do me a favor and take a look at the '82 Scarlett's face...and then look here. Tell me Hasbro hasn't made HUGE strides in the past 22 years in the head sculpt department! Bombstrike actually looks feminine! Her hair is short, yet sculpted very nicely and flows realistically. Her frame is slender, but proportionate, although I could see an argument made about the unhealthy self-images toys like this might provide for little girls.

Leaving that aside, the shirt itself is sculpted quite nicely, with, of course, some added shoulder pads for a little flash and flair. Her arms are well sculpted and the shoulders are perfectly in shape, another great benefit of this new sculpting technique from the wonderous guys of the Hasbro design team.

The rest of her uniform is straight forward and simple, with plain military pants and kneepads, boots and pouches all as they should be, fitting in well with the rest of the wave. The added touch of her wristpads and fingerless gloves puts a nice emphasis on the figure and gives her more interesting sculpting beyond what they've done with her torso. ;)

Going right along with the theme of Wave 7 seems to be straight forward, realistic and military oriented paint schemes, and it's much appreciated! Bombstrike's light brown shirt is a nice different shade, yet still looks subdued and as an Army (or Air Force as the case may be) shirt should look. A light green hue covers the shoulderpads/backpack straps, and it's a very cool, different shade. Yet another color is mixed in with her belt, gloves, boots, and kneepads, and the light gray brings some life to the mold and adds a nice, different splash of color.

The different shades of green used for pants camouflage really brings me back to how Hasbro did it back in the good ole days, and it really looks great. The pattern is effective and the camo paint looks great without being too over the top. Very cool camo pants!

Like a lot of her comrades in this wave, Bombstrike ends up with some cool new accessories. First of all, we get a very cool looking new rifle...I'm not really sure what this weapon is based on, but it looks fantastic and I really love it!

In addition, she has a new backpack, which is really pretty neat...it's got a radio tucked inside on the top which comes out, but it also has a huge hole it in for an unknown purpose. I have a suspicion that one of the new gimmicks from the Robot Rebellion lineup may involve attaching armor or technological weaponry to these empty holes, but for now, I'm honestly not sure what it's there for. The backpack itself and radio are excellent, though, and very cool new accessories. Also, considering the top of the backpack is completely open, it might give some people a chance to customize a backpack for a custom Lady Jaye...plenty of places for javelines to be stored.

So Hasbro makes due with a new female character and a new mold at the same time...a combination that hasn't been seen since 1987. It makes quite the splash, too, with a cool dynamic paint scheme and simple, yet interesting sculpting.

Overall, proportions are much better (than say compared to Spy Troops Lady Jaye especially) and the figure almost looks like it could have been pulled from 1985, which is high praise indeed. Great job with this one and Croc Master, Hasbro...this is a must buy two-pack. 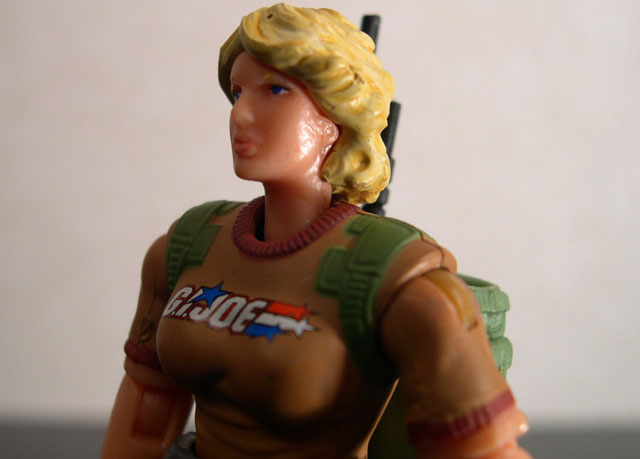 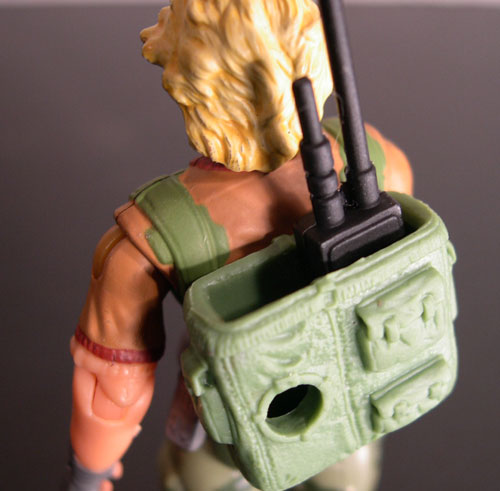 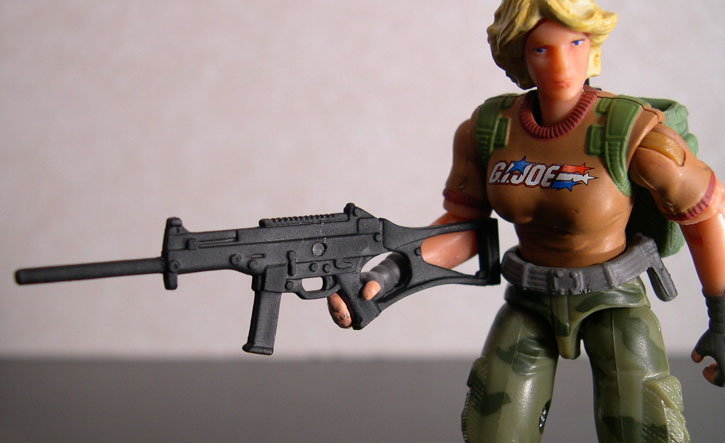 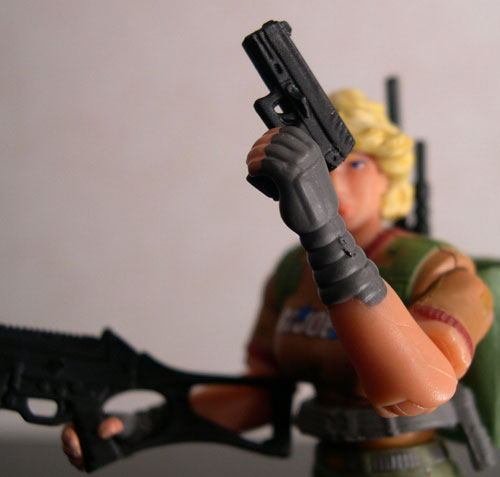 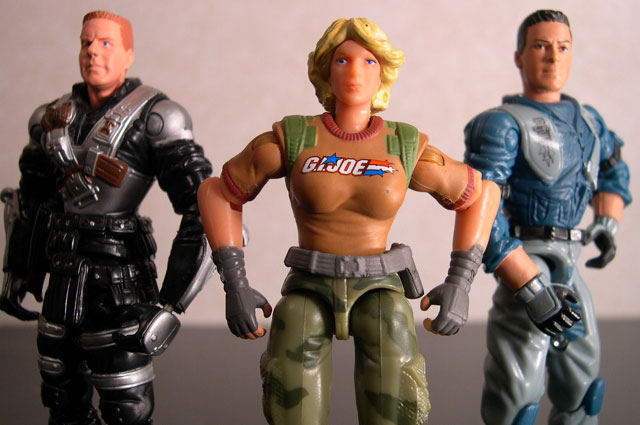 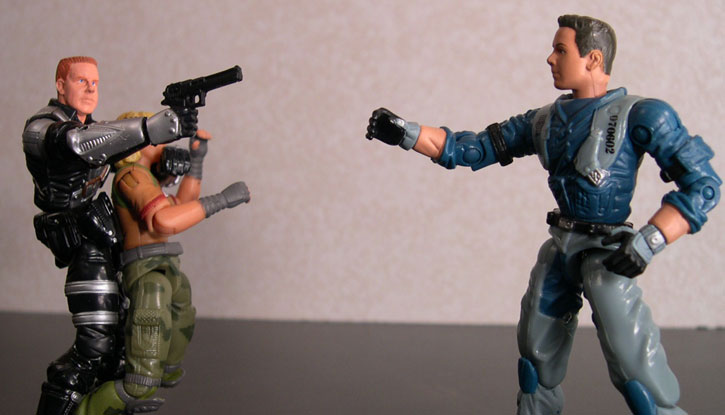