- Slipstream action figure included
- Rotate rear exhaust port to select missile or bomb mode
- Look through the exhaust ports to see target sighting
- Pivot handle up and down and tilt plane left, right, up and down to hear different sounds and phrases
- Landing gear lowers manually
- Missile launching with fold down handle/trigger mechanism

It seems like once a year Hasbro pulls no punches and pressures it's design team to come up with a nice large vehicle crammed full of features, yet still designed in a somewhat realistic, yet fun overall design. Two years ago it was the Night Attack Chopper...last year we got the very cool Patriot Grizzly. This year we have the Thunderwing.

Up to this point we've gotten some pretty mixed results with the fighter planes that have been released. I liked the Sky Sweeper personally, but a lot of people didn't, blaming it's out-of-scale look. I also enjoyed the Tigerhawk, too, but again, it was a little too unrealistic and too action-feature laden to be useful in a lot of environments.

So when were we going to get a respectable G.I. Joe plane for Ace and Slipstream to pilot? Well, we've got one now.

I say without any hesitation that the Thunderwing may not be the most realistic, the most dynamically styled, or the most impressive plane ever released, but it is without a doubt, the most fun!

This is definitely where this plane absolutely shines, and shines brightly.

First of all, the overall design is based off of the F22 Raptor, a futuristic fighter plane with dramatic sloping wings, a very cool angular body design and it seems to handle this designation well. This overall design suits a G.I. Joe vehicle well, and even though this vehicle is pretty out of scale, and the wings appear a little stunted, it is a large and impressive fighter plane and makes a terrific addition to G.i. Joe's already impressive and numerous Air Force.

Hasbro pushed the colors up a notch as well, giving the plane a gray-based camouflage scheme, keeping it fighter plane-gray as it should be, but adding some great flair and exciting design elements with the great paint applications.

But where this toy really shines is in the playability. While I'll cover the electronic features in the next section, even without them, this aircraft just screams "play with me". It's thick and hefty, not thin and brittle, and can be lifted and flown around with enthusiasm without fear of knocking off parts or breaking anything. The fold-down handle allows for some very broad play and fun "bombing runs", yet once it folds back up it becomes a lot less noticable and almost blends right in with the rest of the aircraft.

The landing gear folds down nicely and stays down firm (something I was quite concerned about since I'd seen the prototype a few months ago) and is very nicely designed. The flip-up canopy also works well and the interior of the cockpit looks nice, although it's not overly details, it has a great flight stick and enough detail to be useful. The overall look of the Thunderwing is terrific. 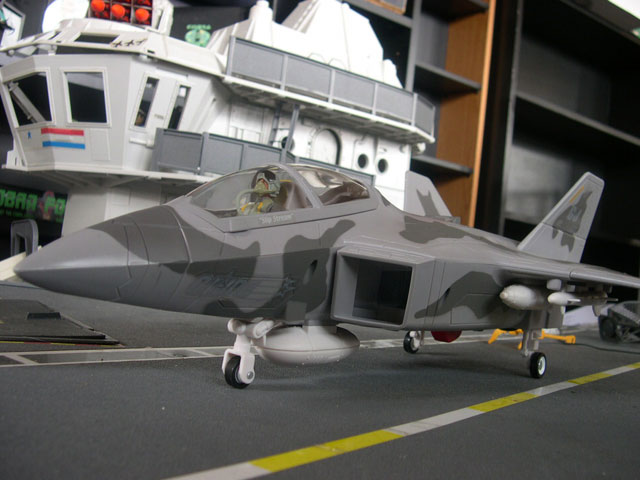 I've said numerous times in reviews past that electronic features or action attack type things do nothing for me, and often take away more from the toy than they add. Well, this plane definitely makes me think twice about this concept...this thing is just too much fun for words.

From the moment you press the red button on top and fire up the engines, the Thunderwing just suddenly has a life of it's own. The deep electronic voice bellows nicely and sounds realistic as you soar into the clouds ("Take it up!") or head down for a bombing run. But this thing really shines once in flight and with the handle folded down.

First of all, as you zip around and listen to the phrases, you can look through the rear exhaust ports and target your enemy, then twist the sights to choose whether you want a bomb target or a missle target. This rotating of the exhaust port moves you from a sighting underneath the plane to a sighting element at the front of the plane. Depending on which target you're using, the related ordinance will fire with a cheerful declaration by the intercom voice within. The bombs clip on underneath the plane and hold, then release very reliably. The missiles load through a flip-up top hatch, and then fire out of a port underneath the front of the plane, right above the fuel tank. Very cool effect, and nicely concealed from the outside.

Bombs are announce by "Bomb Away!" along with a whistle and distant explosion as the bomb hits the ground, while missiles are reported in the same way, only with a woosh and blast shortly afterwards. While you're blasting away with the bombs and missiles with the large trigger, you can also press the smaller trigger on the handle to fire machine guns.

All of these features combine to make a very enjoyable play experience, even for us older kids. After opening this thing up, I spent a good twenty minutes flying it around the house and shooting my wife, then dropping bombs on the dog. It was quite fun...for me, at least. ;)

Well, this is a reason to celebrate...we've got a pilot on the Joe team and it's not Ace or Wild Bill. Slipstream is a great choice for this plane character-wise as well...he's always been the Joe test-pilot. The guy flying the pseudo-futuristic state of the art fighter jets, of which the Thunderwing definitely is one.

The figure mold is pretty much as good as it gets. He does suffer from some short torso long leg syndrome, and stands somewhat cock-eyed, but those small faults are easily overlooked by the absolute amazing detail-work on this very realistic sculpt. The basic flight suit mold looks nice and normal, as it should, without extraneous pouches or things that might not normally be on it. This flight suit is covered by an assortment of belts, straps, and flight/breathing gear all molded to absolute realism and all looking excellent.

His face sculpt is very nice as well, even though it doesn't really have any of Slipstream's trademarks. In the case of Slipstream, though, that might be a good thing. His face is dramatically sculpted and has a great, noble look on his face with more than a hint of determination. His helmet fits snug, but well, and the airhose clips in perfectly. With the nice shades of gray, and only hints of yellow (that still work, even with the brighter hue) this is pretty darn near the ultimate pilot figure. Nice work, Hasbro.

Home run. Fantastic plane, with loads of fun play features, yet still retains an almost realistic sculpt...well, realistic enough for this Joefan, anyway. This is pretty much as good as it gets with Hasbro these days, and in my opinion can hold it's own against almost pretty much every other Joe vehicle out there, modern day or otherwise. Even at the upper price range in the Delta class (around a $30.00 MSRP) but worth every penny, in my mind. Looks great on the Flagg for older collectors, and has a ton of awesome play value for the younger generation as well. Feel safe and secure in your manhood by picking up this nasty fighter jet. 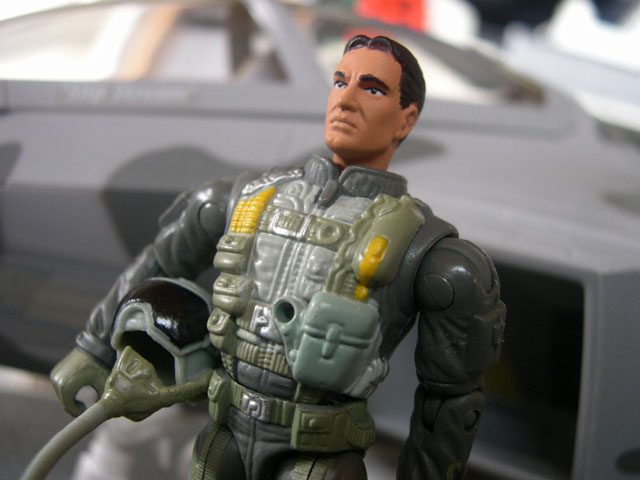 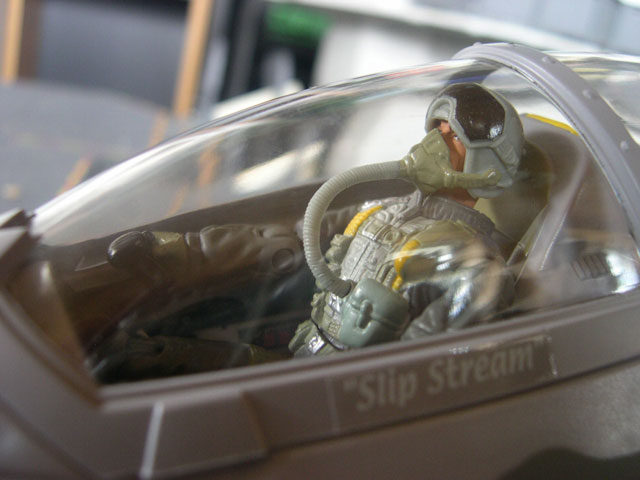 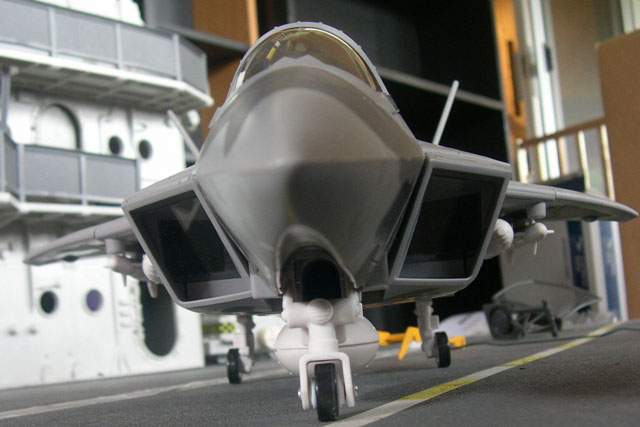 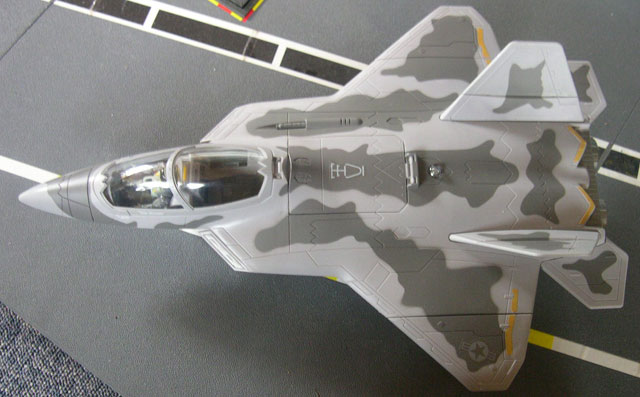 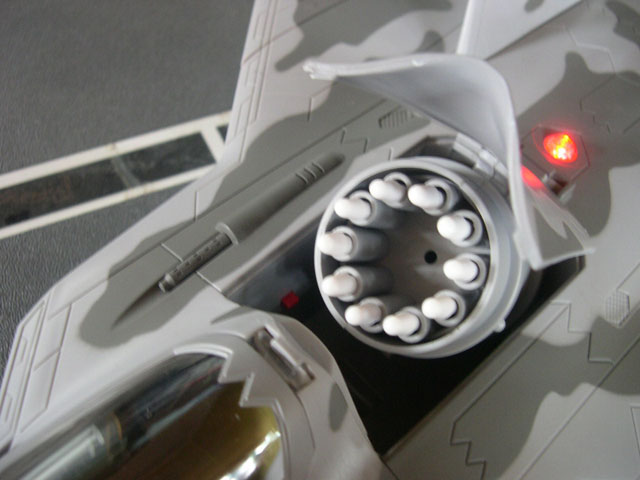