I'm not sure if my poor wallet can handle this...a G.I. Joe draught for almost two months, and now we're getting drowned in new product. It makes sense from a marketing perspective, and I'm actually very happy that Hasbro seems to have this assortment down nicely. We've got the Valor Vs. Venom DVD coming out shortly, and just in time for it's release, we have two vehicles which seem to play a large role in it hitting shelves.

Not only that, but within a few weeks of the DVD release, we should get Wave 4 hitting shelves as well, which also seems to feature a number of characters that play big parts in the movie...much better marketing than with Spy Troops, which ended up being released just as the Spy Troops line was ending. Based on previews for the movie we've seen, it would appear that the Sting Raider plays a pretty important part in the movie's theme, possibly even transporting V-Troops to their destinations. It looks to be much more plane-based than sub based which is fine for me, especially since the design of this vehicle lends itself to either pretty well. 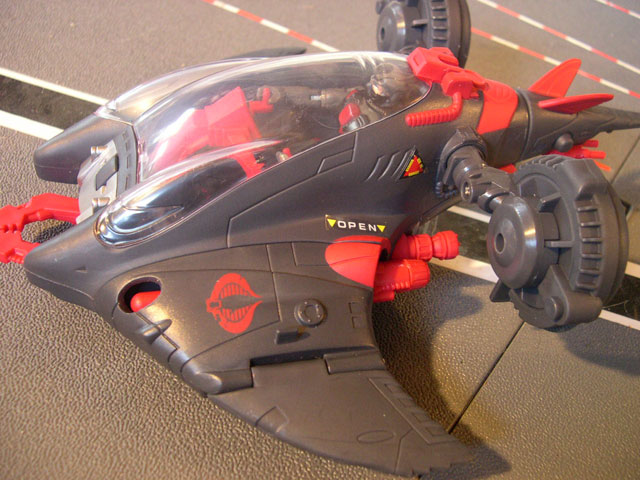 As has become the norm for Valor Vs. Venom vehicles, this COBRA air/water craft is strongly based on it's animal counterpart, in this case, the sting ray. It's nice, actually, that this vehicle more closely resembles the animal it's patterned after, unlike several other of the COBRA vehicles, which seem to have their animal parts mentioned as a mere afterthought. This particular vehicle resembles the ray in several aspects...first of all, the dull gray color matches the rough skin of the water-borne fish, and also suits this vehicle design well. Secondly, the shape of the wings is quite manta-like, which makes this attack vehicle not only glide through the waters, but makes it look like it actually could get airborne, unlike the Battle Hornet, which seems like it would drop like a stone from any height.

The wings slope back nicely into a sleek body and elongated tail, again, similar to the host animal's overall look. This tail has two very cool fins and an awesome little gunpod which add some nice design flair and a little more firepower to a vehicle that, for it's size, already packs an all right punch.

This Sting Raider is small, but sleek, yet still manages to cram a decent amount of playability into such a small Alpha vehicle. The two wings fold up and down, which don't seem to serve much purpose...the beefier sections of the wings slide open as well, to reveal twin missile/torpedo launchers. There are also two more missiles that clip onto the wings, too, which I somehow forgot to take pictures of for the review. :/ A grabber claw is perched right at the front of the Raider, which seems mostly effective for the submarine capabilities, but still looks neat.

Lastly, the two thrusters pivot from vertical launch to propulsion, making this vehicle taking off from the water at least a little more realistic. The control stick inside the cockpit is also a neat little detail, with large twin joysticks, and a pivoting motion allowing the pilot to get in and out easily. All in all, for a pretty small Alpha vehicle, this one seems to have the most features and the most fun all combined with a pretty cool design scheme and COBRA-esque look. 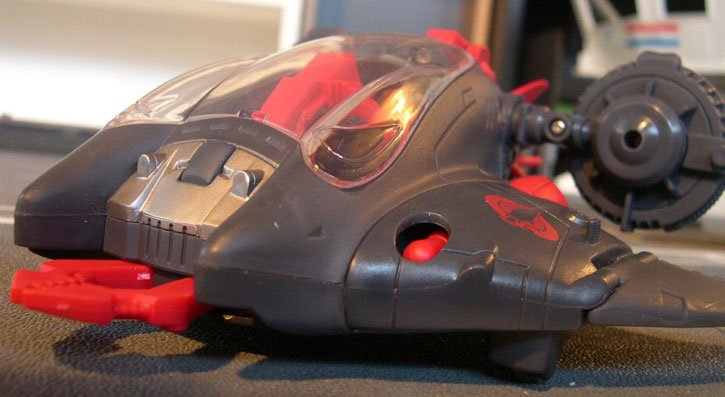 Since sound attack has faded away and these "electronic features" are no longer as prevelant, I'll have to think about reworking this segment of the review. For the features of this vehicle, I covered most of them above, but I can talk about how they work...

I do like the extending wings with launching missiles...the mechanism works well and seems to have a purpose to it, and I dig that you can still kind of see the torpedos resting in there even with the wings closed up. The rotating thrusters are also done very well, looking realistic and effective for keeping a small light vehicle like this moving in any direction it needs to go in.

This is another place where this vehicle shines bright. Almost everyone agreed that the Electric Eel figure released in Wave 3 was a decent sculpt, although some people were upset with the glowing action. It didn't bother me a whole lot, but I can see how it would bug some Joefans, who desired an Eel tribute done up like the original.

Well, they get their wish with this vehicle. The Eel that comes with this comes in a paint scheme as effective and purposeful as the vehicle itself...a gray base uniform (like the original '85 Eel) with very cool black armor and red highlights matches up to the terrific color pallet of the vehicle and blends excellently with the original Eel as well.

The sculpt maintains it's amazing detail as the Wave 3 version did, with an awesome rounded helmet/airmask combo and some fantastically detailed armor. The chest plate draws the most attention and looks terrific with the trimming hued in red over a very effectively sculpted wet suit. My only issue with the figure is the constant proportion problems Hasbro can't quite seem to get under control. His huge biceps, long legs and stubby torso all combine to produce a figure that just doesn't quite come together and look human. It's unfortunate, too, because with this color scheme, this could be the fantastic Eel update collectors have been waiting for since 1985. He comes so close, but just doesn't quite close the sale.

Hasbro has been on a roll with their Alpha vehicles this year. Starting with the Tigerhawk and Venom Striker, continuing on with the two excellent Mechs and now we get the Sting Raider. Granted, they may have stumbled slightly with the Neutralizer and Battle Hornet, butI can't think of too many bad things about any of those other releases, and this new COBRA sub/plane fits the mold that the others have set. It's well designed, well executed, and comes with a great figure, as has become the norm for these relatively inexpensive small vehicles. Not only is it small and streamlined, but it packs a punch and could effectively supplement COBRA's air force.

Go ahead and scoop up a few of these, I'd say...the figure has potential and this little mini vehicle would look great in squad form, ready for assault, whether aquatic or airborne. 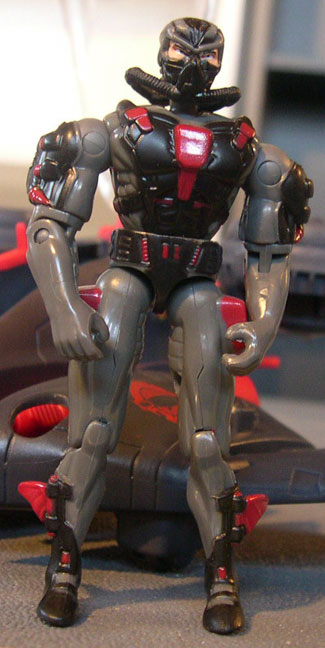 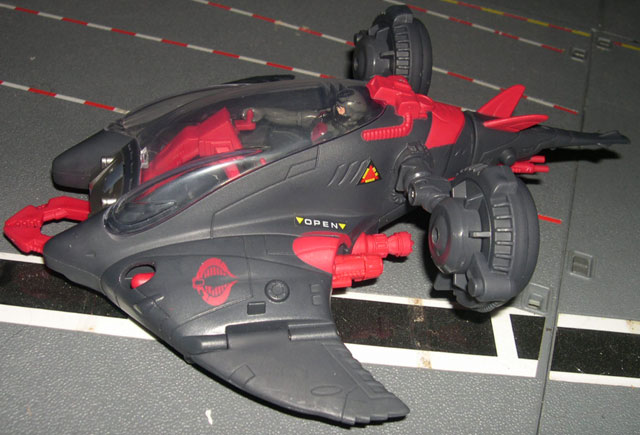 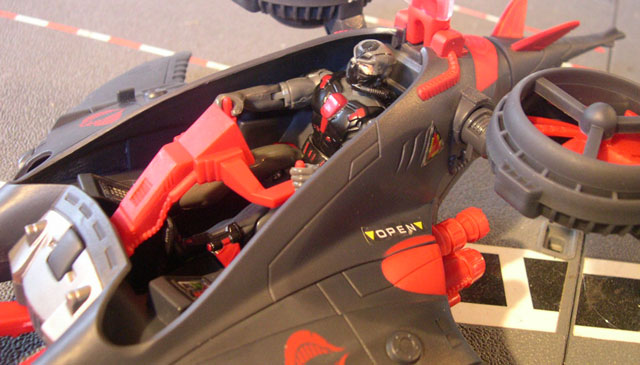 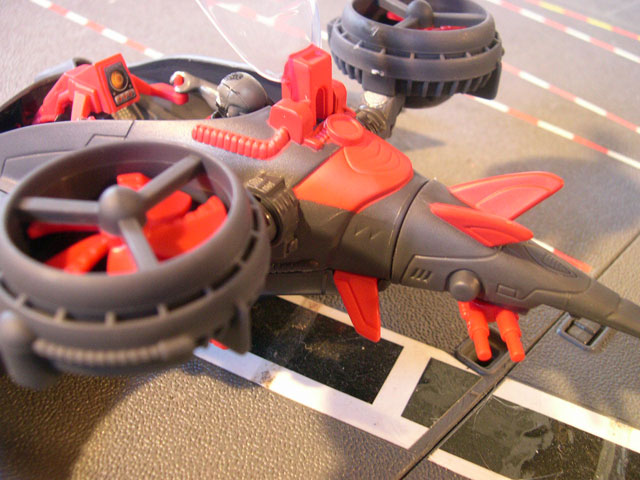 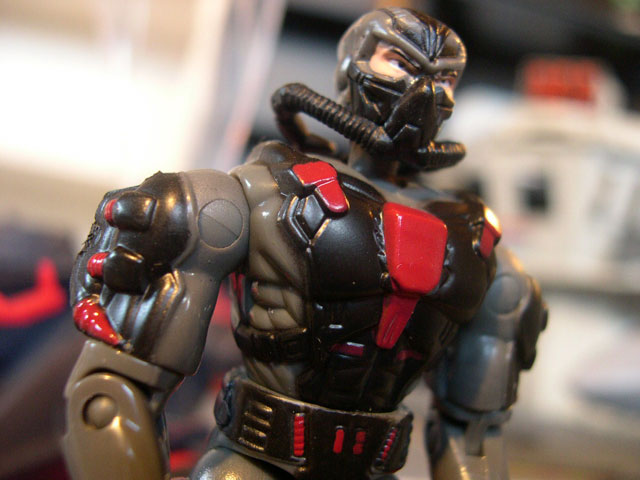